I just finished quilting this scrappy pineapple lap size quilt -- doesn't it look great.
It began life as a demonstration/teaching sample for Marti Michell's 1" Pineapple Set and I recently finished the piecing and decided to gift it to one of my nephews.
This is the third pineapple quilt I've made using Marti's templates -- the best part is once the pieces are cut, there is no trimming, no paper to remove, and the blocks are consistent in size! 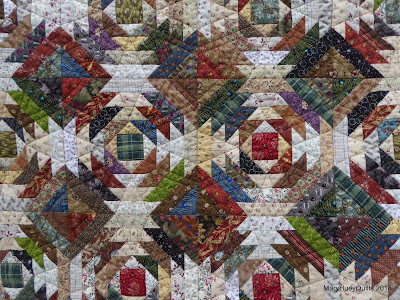 I was feeling intimidated about the "how" of quilting it, but I'm pretty happy with the design that evolved.  It's hard to photograph clearly but I used a series of simple edge-to-edge lines so I'm going to try to share that process here (partly, so I'll remember how I did it!!).

The first set of lines started at the outer edge of the quilt and worked through the dark areas of each block.  I'm pointing to the spot where I entered each block. 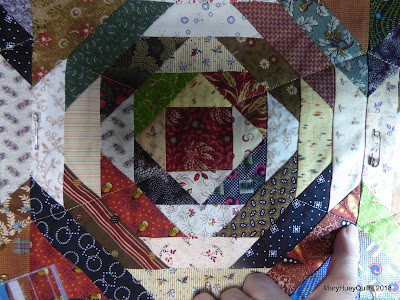 Using a straight guiding ruler, I stitched across the dark pieces to the corner of the center square. 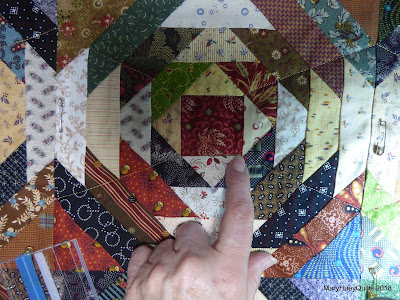 Then "in the ditch" along one edge of the square. 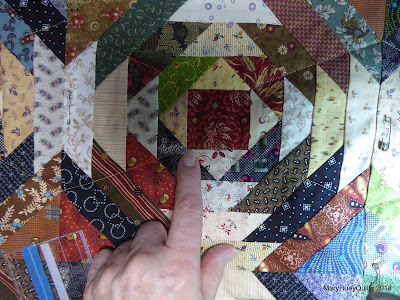 And from there, back along the "points" to the next block. 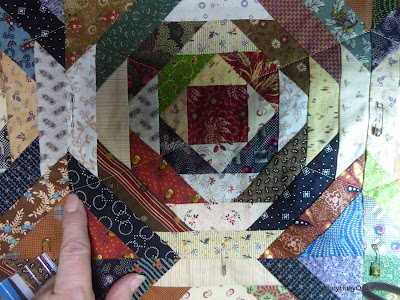 By repeating that pathway up and down and across the quilt, until all the blocks were stitched, I created these 4-pointed star like shapes and there were no threads to bury since every line went edge-to-edge on the quilt. 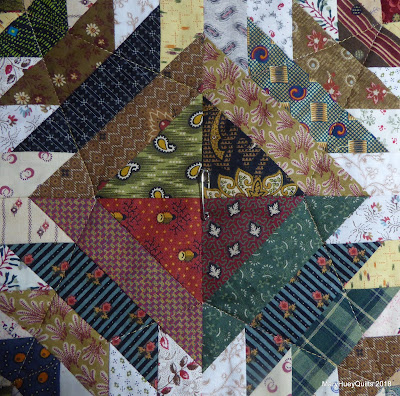 After finishing this step, there was too much open space so after several days of contemplation, I stitched a second set of lines through the light areas of the blocks.  These lines went across the "ditch" along the outer edge of the first round of triangles -- from the needle to my finger in this picture. 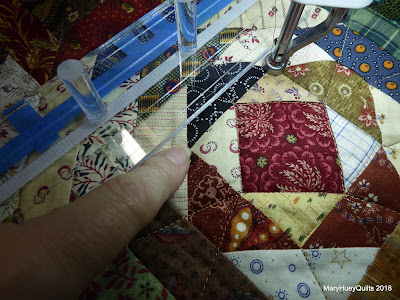 From that point, I stitched over into the light sections going along the ends of the points (from the needle on the right to my finger on the left). 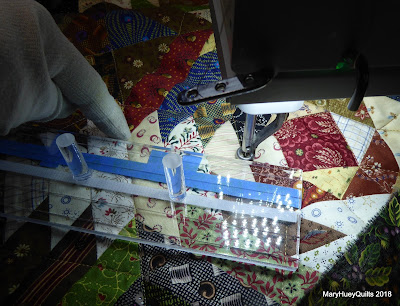 Then continuing from that stopping point across to my finger -- this part of the line ends at the adjacent blocks center, 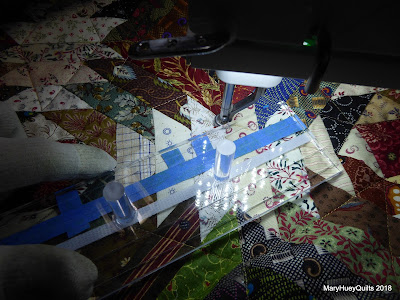 but I ignored that for the moment and traveled back to the right. 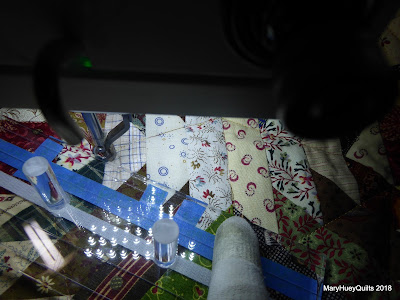 Follow the finger -- back to the beginning of that section. 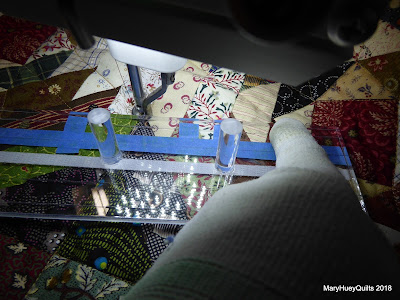 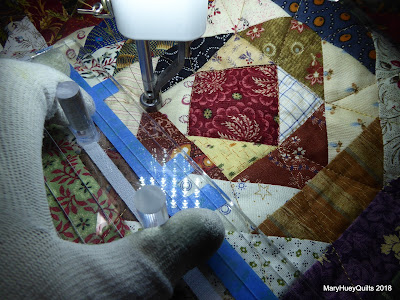 Marti includes a line drawing in the instruction booklet which I copied out and drew colored lines to help me recall this stitching plan in the future.
The first set of lines are green in my diagram and I stitched them up and down, left and right across the entire quilt.
The next set of lines I stitched are red -- these only need to be done up and down.
The first line zigs over to the left as I moved down the quilt and catches the horizontal light sections.
Then a second line (not draw out in the diagram) just moved down the quilt vertically because the third line (a repeat of the red line drawn) will zig to the left and catch all the remaining light areas of that row of blocks. 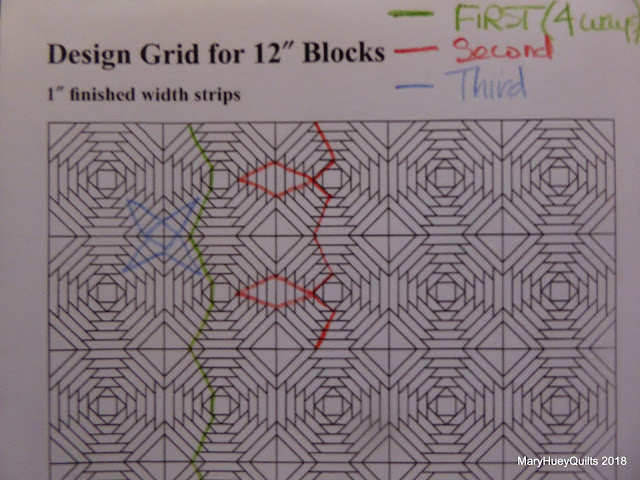 I was still not satisfied with the density of the quilting, so after more contemplation and a couple false starts, I echoed each 4 point star 1/2" inside the first lines (blue lines above).
Each of these were stitched separately and were the only threads that needed tied off!! 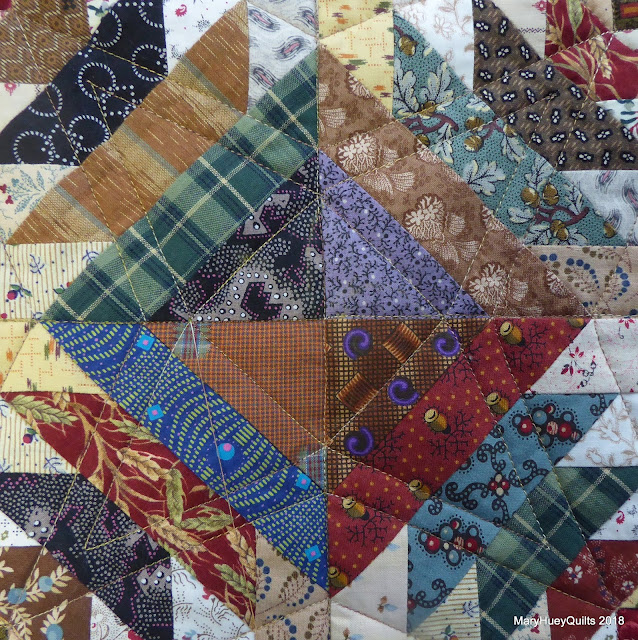 Now it's all washed and ready to go!! 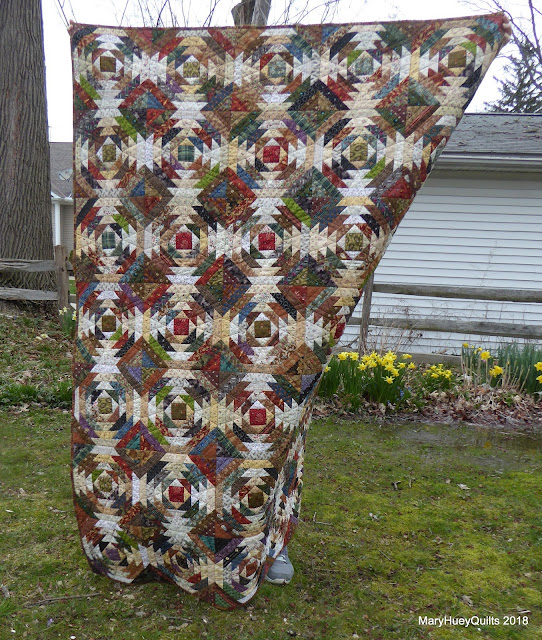 It's five by seven blocks (50" by 70") and used lots of reproduction prints.  I did lots of the piecing as "leaders and enders" while working on other projects! 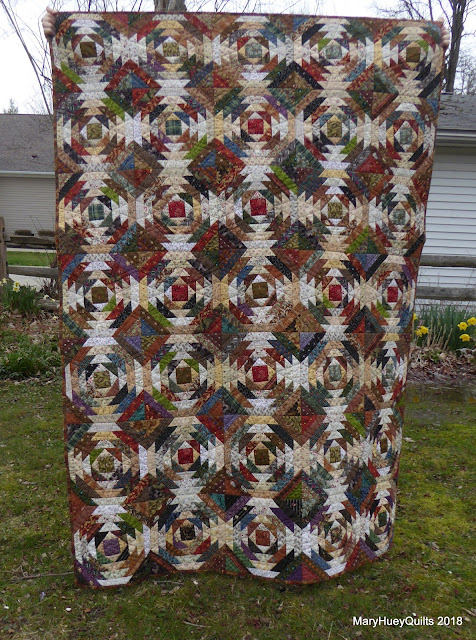 The quilting is simple and was easy for me to manage with my APQS George -- all straight lines!!

This is my first finish for the second quarter Finish Along 2018 -- yea!!
Another UFO out the door!!

Have a great week!
Mary