High summer is upon us here in Northeast Ohio!
It's a season of color, happy little discoveries, and comfortable memories.
These little blue flowers (I'm told it's a weed) grew alongside the back porch of my first childhood home and ever since I discovered them in my current home's garden, I allow them to grow where ever they appear just because they make me smile. 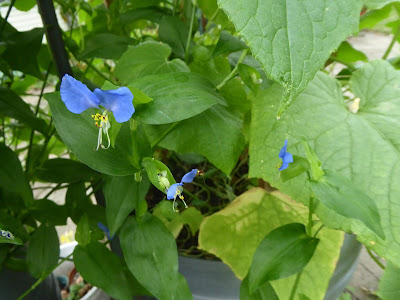 Suddenly on the 5th of July, I discovered Monarch butterflies were leaving eggs all over my backyard plot of milkweed so the new rearing enclosure that was a Christmas gift had to be quickly assembled! 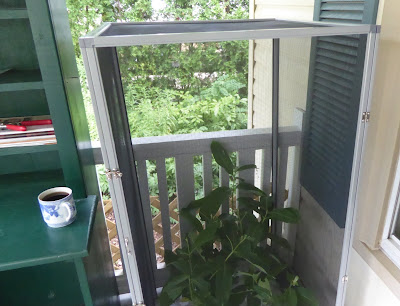 Now my mornings begin with cleaning the enclosure, reviewing everyone's progress, and bringing in fresh food.  With close to 70 caterpillars at various stages and a few new finds almost everyday, it's a good hour or more of pleasant work.   I can't determine if all these eggs are the work of one female or several, but for about 5 days, every time I was outside, there was a Monarch in my yard -- such constant presence is new for me.  The females can lay 400 eggs and I'm pretty sure she did!! 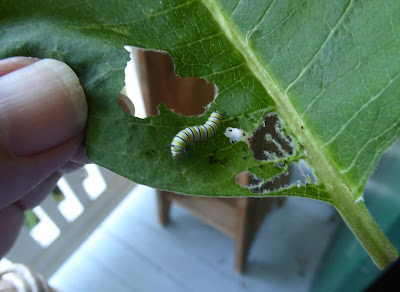 Now at the 15 day point, I'm seeing a few new chrysalis every day and should be releasing butterflies by the end of July. 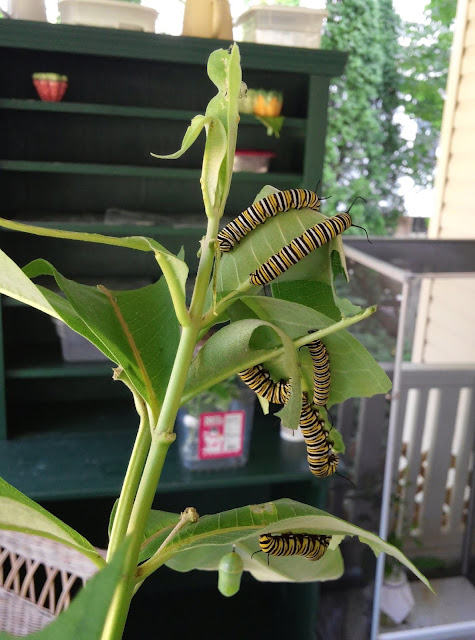 These likely won't be the generation that makes the big migration to Mexico, but they will parent that generation so I'm excited to be able to release so many!  If you live in the area and would like to stop by and see all this in person, let me know! 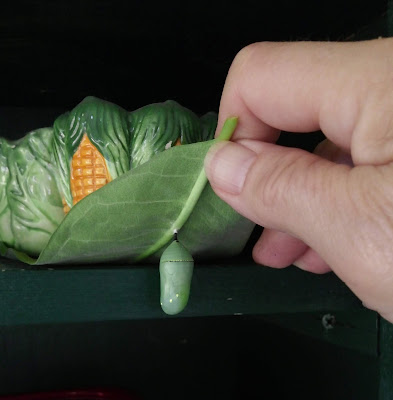 Then there was the big "we got married" picnic that my son and his wife threw!!  Both families worked together to set up tents, mow the pasture, organize tables and coolers and lights.  My son (in the hat) and his "dude buds" smoked a whole hog, a local farm-to-table caterer did the sides . . . . 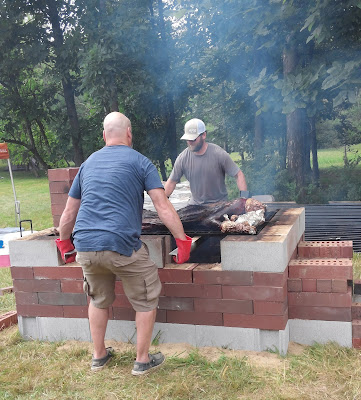 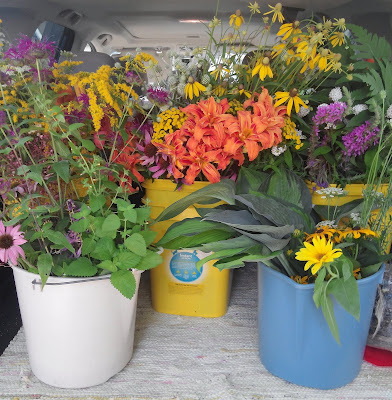 In between all this enjoyment of summer outside, I got caught up in a knitting project!?!
I discovered Marie Greene of Olive Knits this past winter -- her sweater designs are primarily knit top down and seamless -- my kind of knitting!!  She challenged anyone who was game to a 4 day sweater knit-along beginning July 1 with a new pattern, The Beekeeper's Cardigan.  During a tidy-up of my knitting supplies in mid-June, I re-discovered a bag of my mother's yarn -- enough for a sweater?
I swatched to test my gauge and get a feel for the design. 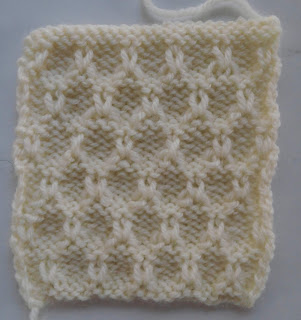 You know where I'm going with this, don't you?
I did not finish in 4 days (but some gals did!?!) but if you follow my Instagam feed (@hueymary), you've seen progress photos.   This was the end of the two week knit-along -- I was at 44 hours at this point.  Today, I'm finishing the second sleeve and then will start the final ribbing bands.
It's been a delightful knit and I'm so pleased with the results.
I'll share a bit more about when I finish later this month! 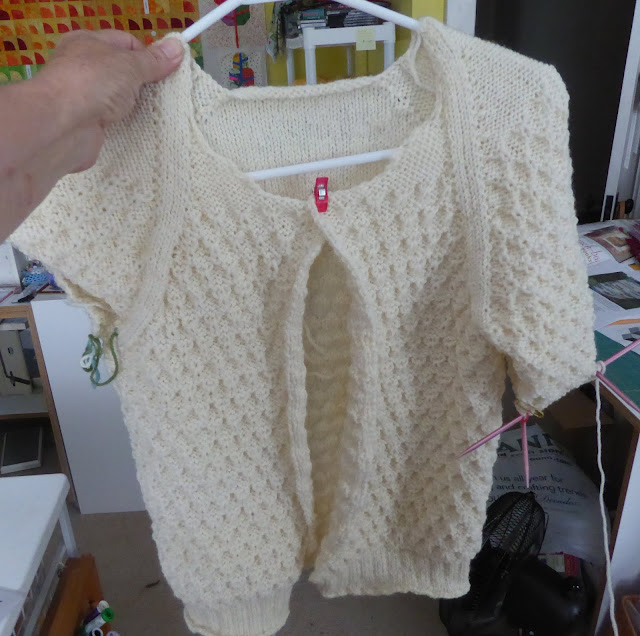 I'm staying on my machine quilting schedule for the most part -- make steady progress every day -- though keeping tabs on this pot of "bush" cucumbers (they are now embracing the huge tomato plant in the adjacent pot) has been distracting.  It's behaving like a zucchini, hiding the fruit just under a leaf so that in spite of twice a day inspections, suddenly there's an almost too big fruit down there??
Then something has to be done with them -- refrigerator pickles this afternoon! 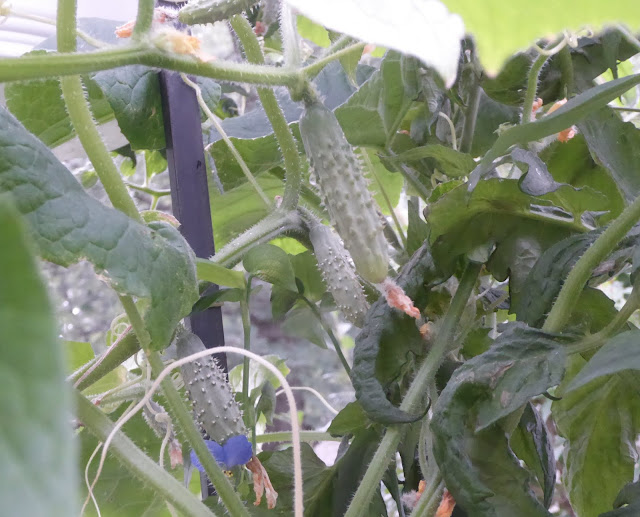 The black currants HAD to be harvested today -- I just have one bush so never enough to do anything significant.  This year, I'm going to try drying them like raisins -- should be either enough for a batch of scones (yum) or I'll use them for flavoring tea! 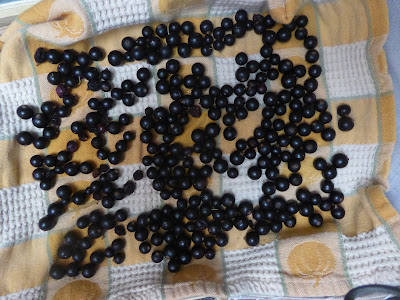 The drive to eliminate the invasive bindweed from this flower bed demands daily policing and on the morning tour four days ago, two cardinals flew out of the honeysuckle vine!  I looked more closely to see what bugs they have found on the vine -- they like big juicy bugs and can crack a beetle in a flash but no bugs!! 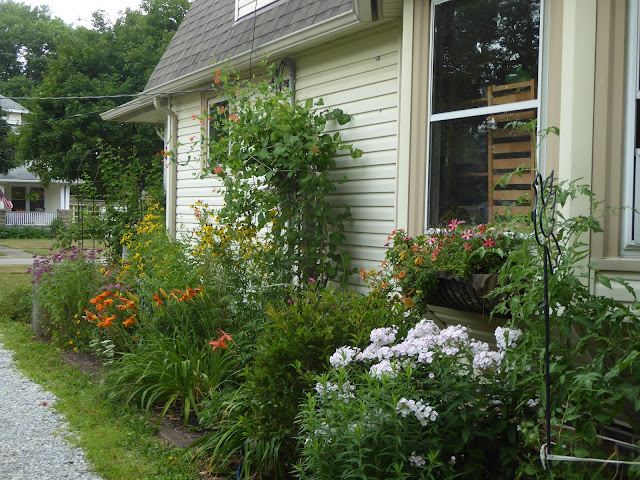 They have built a nest!!
It's hard to see -- just a sloppy looking clump of grass and sticks right in the center of the picture that hopefully will last long enough to fledge their brood! 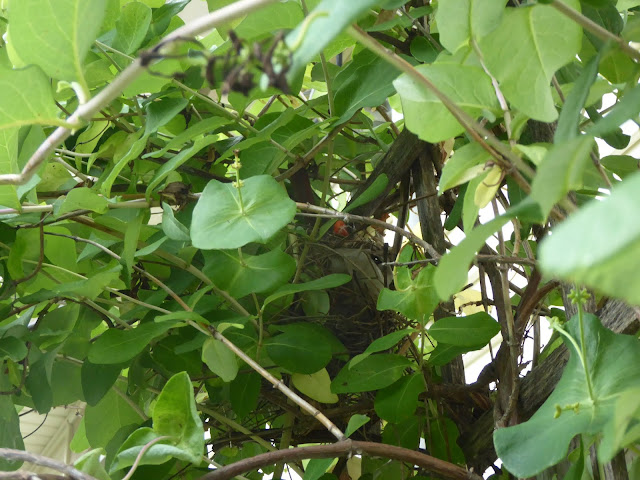 When I was out there working this morning, I was being watched!
The female has started to lay her eggs!!
According to Nests, Eggs, and Nestlings of North American Birds by Baicich and Harrison, she will lay from 2 to 5 eggs and begin incubating once the 3rd egg is laid (birds generally lay one egg a day).
Incubation takes 11 to 13 days!
Can you see her? 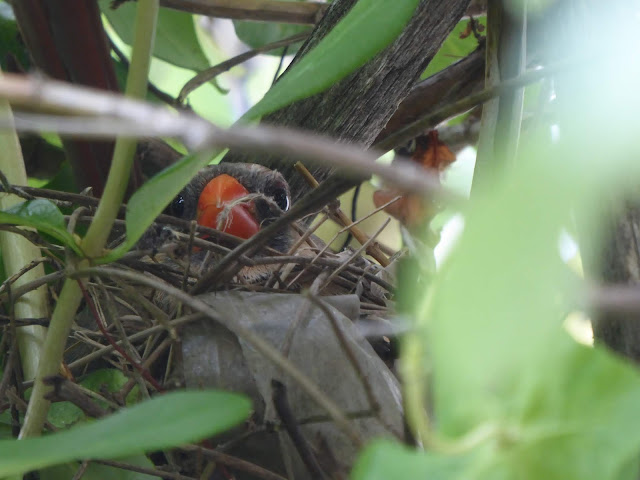 So the next few weeks will be filled with lots of cardinal watching -- I've always wanted to discover a cardinal nest!!
FUN!!
While it's hard to be inside on the nice days, I am working on my "birth year" temperature quilt!
It just took an interesting turn, too . . . . . . all will be revealed soon! 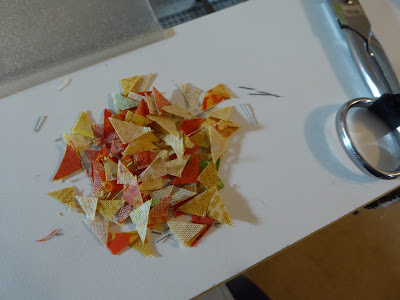 I'm keeping up with the #fussycuttingsewalong hexie project on Instagram.  I am currently piecing this large motif as the center of my masterplan for the 52 hexie flowers that will result from the group by the end of the year.  I've done some preliminary auditioning and feel (pretty) confident about the plan.
As soon as the center is finished, I'll share it here. 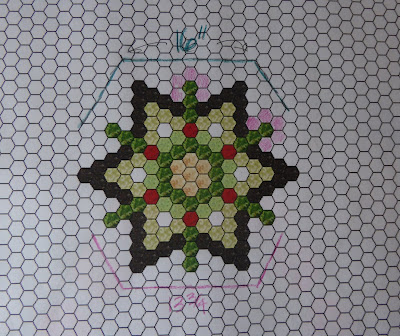 If you don't see it, you know it didn't work after all! 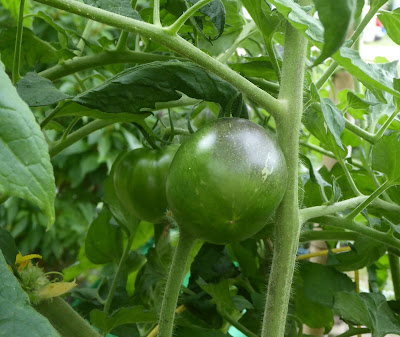 I'm still waiting for ripe tomatoes and I hope this current season is providing you with lots of enjoyable moments, too!
Mary

NOTE:  I still am not getting comments e-mailed to me so I can't e-mail you a response but I do appreciate your comments and am reading them just the same!!  (Yes, I tried the fix several times and will keep trying.)

Are you saying where did the first half of the year go?
I am!!
Time to share a few new goals for the third quarter of 2018 and see if I can get some more quilts finished!!

I'm rolling over my Bernina ZenChic Triangle quiltalong piece -- it's a leftover from last quarter and just past the halfway mark of quilting.  I don't want it to slip through the cracks!! 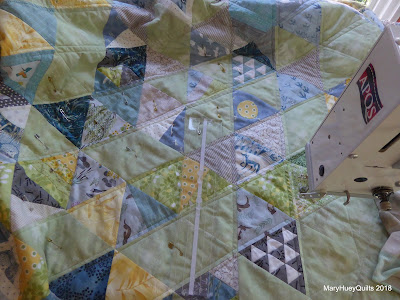 I'm never at a loss for UFO's -- this is the "finished top with backing" shelf.  May look overwhelming to some of you, but there are only 18 on it now.
It was full, to the top, falling off the edge . . . .
So generally making good progress!! 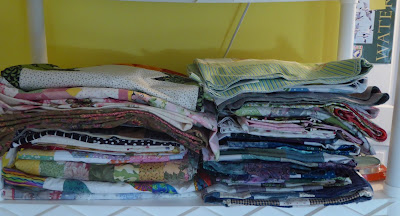 I decided to pull a rather old one -- dates to 2000.  The pattern was laid out and shared with me by a fellow "It's Okay" teacher from Milwaukee, WI -- Jan Kreuger.
I've hung it on the design wall across from my machine so that my subconscious can start working on the quilting plan!
I'll likely use it as a gift or sell it when it's finished. 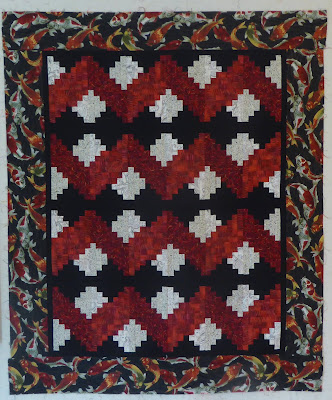 My third project will be to quilt my daughter's version of my pattern, Mississippi Mud. It's a full size quilt and I'll be quilting it in four sections.  I've finished several of these over the years and so I already know how to quilt it!! 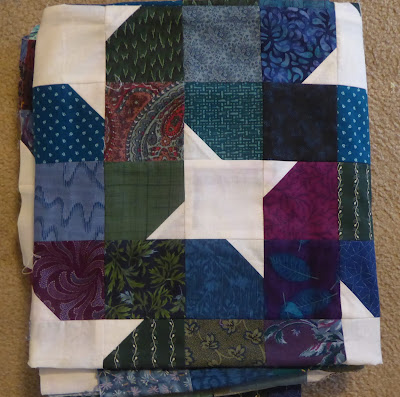 I also want to share that I've donated my Minimal mini wall quilt (it's 13 1/2" square) that was included in the Curated Quilt's third issue Gallery to a fund raising auction on Instagram that begins Monday, July 9.  Bids will be accepted through Friday, July 14 and all proceeds will go to aid immigrant and refugee families in crisis.  80 items are being auctioned!

Click HERE and visit  @stitchersforunitedfamilies on Instragram for all the details! 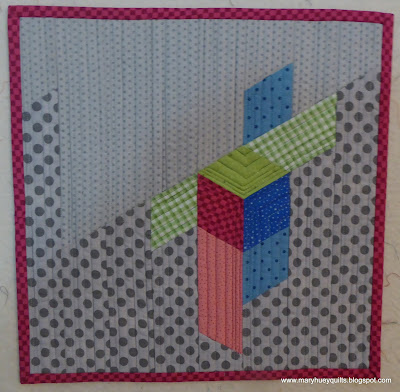