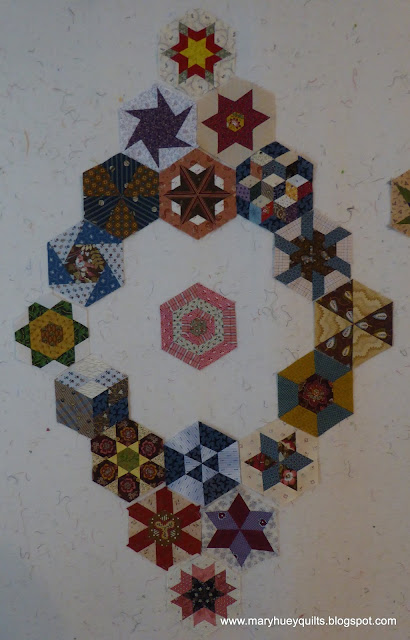 During the fall of 2016, Barbara Brackman ran a series called the Morris Hexathon.  I followed along adapting (most of) the blocks cutting the pieces with Marti Michell's templates and piecing by machine rather than English paper pieceing.  Following is a list of my posts with links so that you can find them easily.  I have collected them altogether because they have lots of cutting and piecing strategy that is useful to my Studying the Stars workshop participants.

For the actual block patterns, you will need to go to Barbara's original posts which are linked in each of my posts.  You also need to be aware that I made 3" blocks, not the 4" blocks as described by Barbara.  Her patterns require enlargement and quite frankly, I was technically challenged in that area.  If you want larger blocks, perhaps you will do better with that!?!  The templates I used will be too small but you will find my piecing ideas helpful

I also took a pass on blocks 19, 23, and 24 so there aren't any posts about those three patterns.  I have been making some repeats of several of the blocks so I have enough to make a lap size quilt if I ever settle on a setting for the blocks (see the final post).

14.  Setting the blocks together (unsuccessfully)

If you have questions, you are welcome to e-mail me at maryhueyquilts dot hotmail.com