Spring is arriving in spite of all the confusing weather many of us are experiencing.
This morning we had snow and this afternoon we had sunshine.
I do enjoy a slow spring though -- the flowers last longer!! 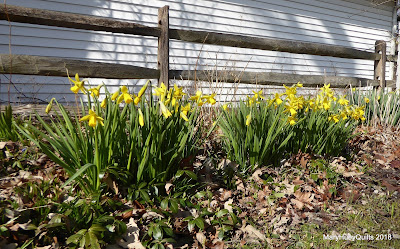 After lots of mental waffling, I decided to join the #The100DayProject which began on April 3 -- it's a global movement to promote building a daily creative habit by "doing every day".
There are lots of artists and writers participating and a fair number of quilters.
Anyone can participate and most of it happens on Instagam.

Because my studio continues to be clogged with lots of UFO's, at the last minute I decided to focus a bit harder on finishing or eliminating or repurposing as many UFO's as possible during the 100 days.
(I might even try not to start anything new, but that's going to be tricky.) 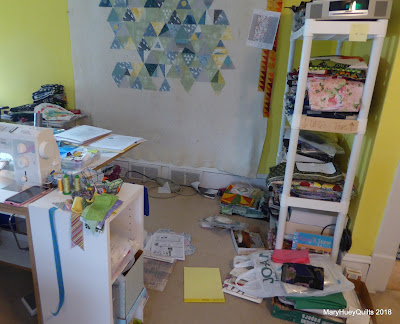 There's a pile of projects down there at the lower right corner of the design wall, so on Day 1, I pulled out this set of eight 6" blocks that I made in 2014 (during QCQAL led by Alison at Little Bunny Quilts) with the plan to finish them into a child size quilt to be donated once it's finished. 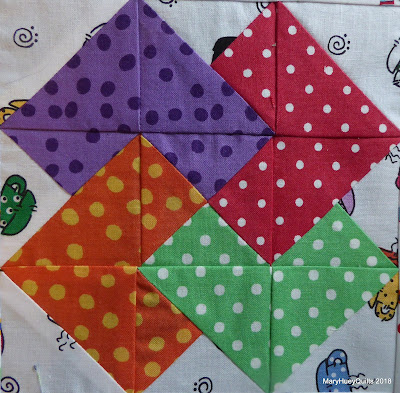 6" blocks and only eight -- so the first step was to frame all of them up with triangles (square in a square style) bringing them up to 9 1/2" blocks! 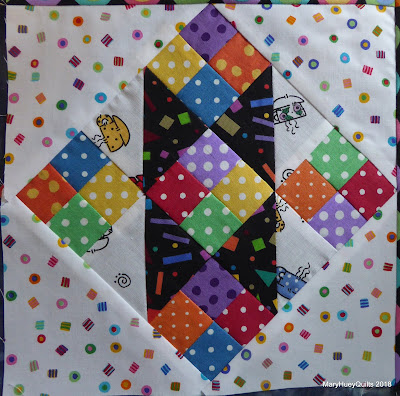 Sashing will also grow the size of the quilt quickly.  I always start a sashed setting by adding the two sashing stripes and one cornerstone to each block.
(HERE is an older post I wrote about how I do this.)
End of Day 1! 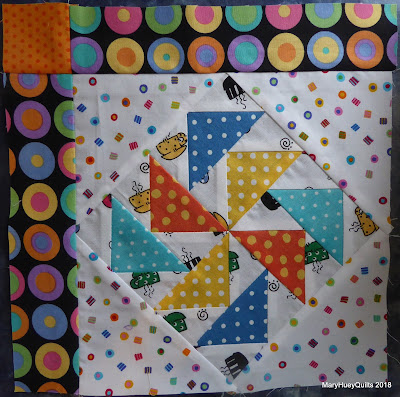 On Day 2, I laid them out on the floor (design wall is busy) and added some setting triangles of this cute black and white cat print (it's old).  I made quilt a few cutting errors -- directional fabric!?!
And then when I finally got everything cut, I realized I had cut them "too small" -- arghhh.
Not enough fabric to recut, of course. 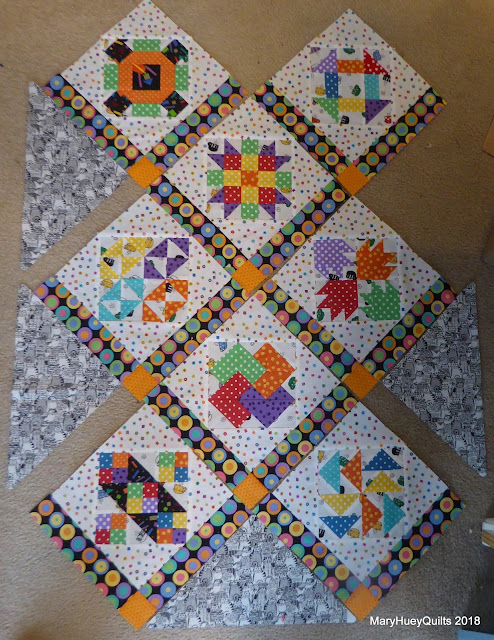 No worries -- just another opportunity to be creative!
Black polka dot to the rescue!!
I added a strip of the polka dot to the outside of each setting triangle!
Clever, huh -- it will make a border and no one will know I made a cutting mistake!!
(You, of course, are sworn to discreet secrecy by virtue of reading it.)
End of Day 2! 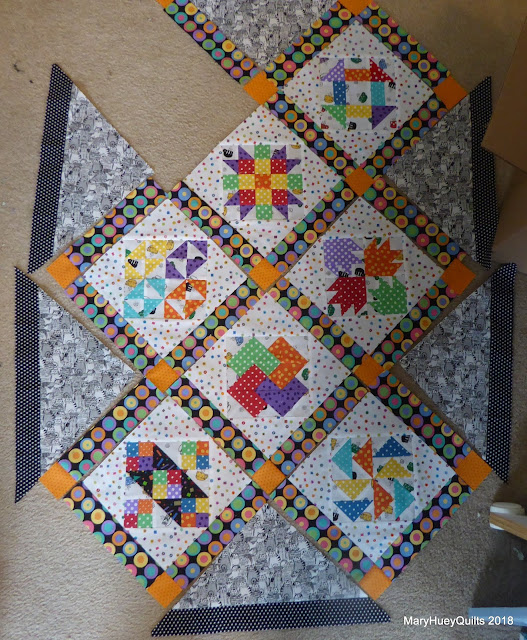 Eager to get back at it, I planned to assemble the blocks and setting triangles on day 3.
I started with the lower left corner block and the three setting triangles -- do you see what I saw?
The corner setting triangle units are too small . . . or are the side units too large?
Either way, it's not going to work without a fix of some sort!!
No more cat fabric, no more black polka dot!?! 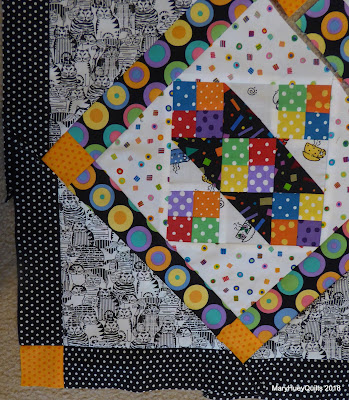 I decided the side units could be trimmed down a bit without effecting the finished setting (whew!!).
And no math brain was required, thanks to my Marti Michell Diagonal Setting ruler!!
Here's where I made the mistake -- I measured the size of my blocks with sashing on one side and used that to choose the cutting size for the side units, but I forgot to add the second sashing when choosing the cutting size for the corner units, so they technically were too small.
Study the picture above for a minute -- does that make sense?
Marti's tool eliminates the "math" and only requires one to measure the blocks (preferably correctly). 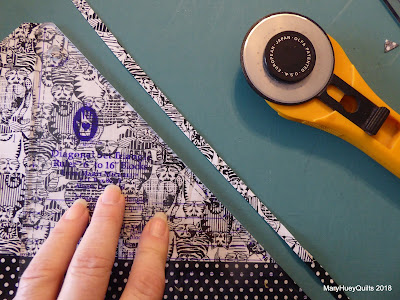 Once I figured all this out and trimmed the side units, the next challenge was to determine the most sensible order of assembly -- here's how I organized the sections of the quilt.
(View from the sewing machine of my design floor area.)
Opposite corner sections went together first -- notice there are more sashing pieces included on the upper left corner unit than the lower right one. 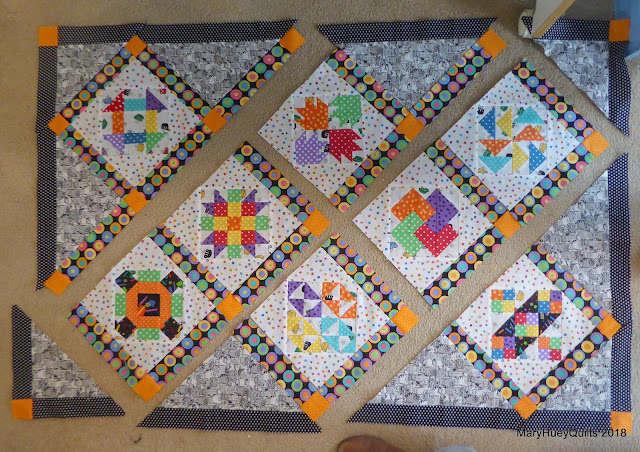 Then I added the center rows to the finished corner sections.
Once that long seam was sewn, the final two corner units can be added. 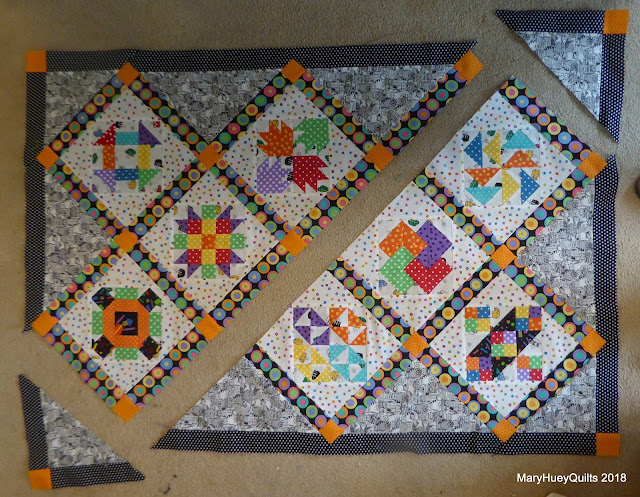 End of Day 3 -- a completely assembled quilt center -- time to pause and think about a border.
Before I left the studio, I did some #stashdiving (love this hashtag!!) and found three possible fabrics to pin up along the quilt top hoping that when I returned the next morning my intuition would quickly choose one to use. 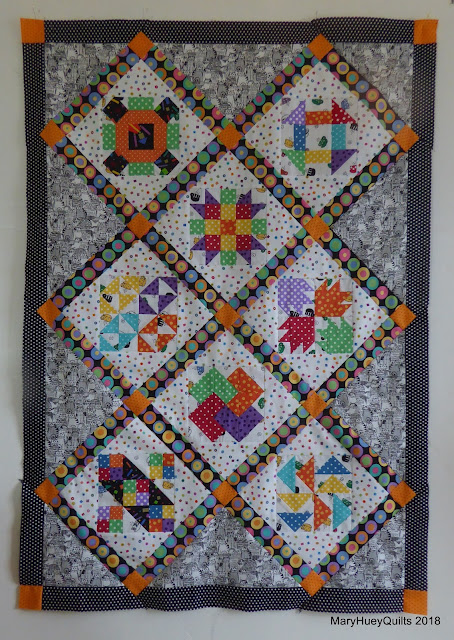 Happily, my intuition never lets me down!
Borders!!
End of Day 4 -- ready for a backing and some quilting!! 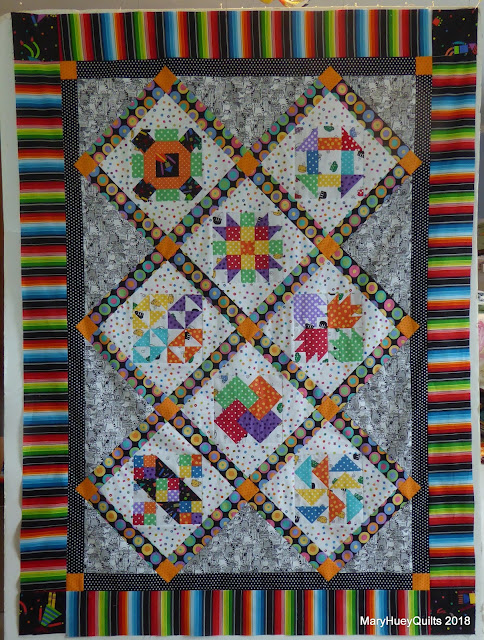 I love this diagonal setting with sashing but given all the goofs I made during the assembly process and because this is the second time I've floundered through it in the past month, I created a cheat sheet with some notations for future use.  I'm sharing it here -- partially for your benefit and partially so I don't lose it!! 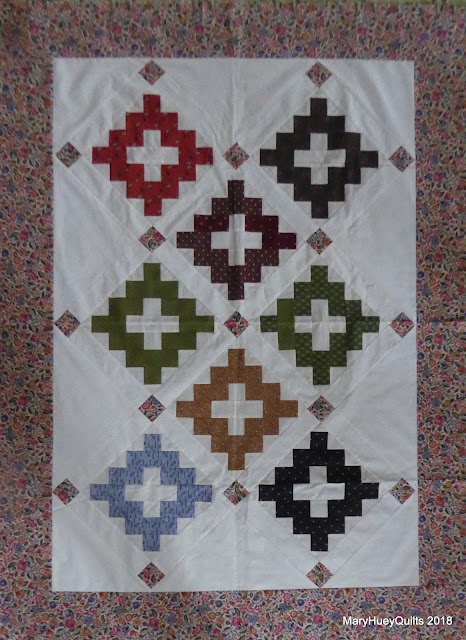 I laid out the setting in Electric Quilt and printed it out. 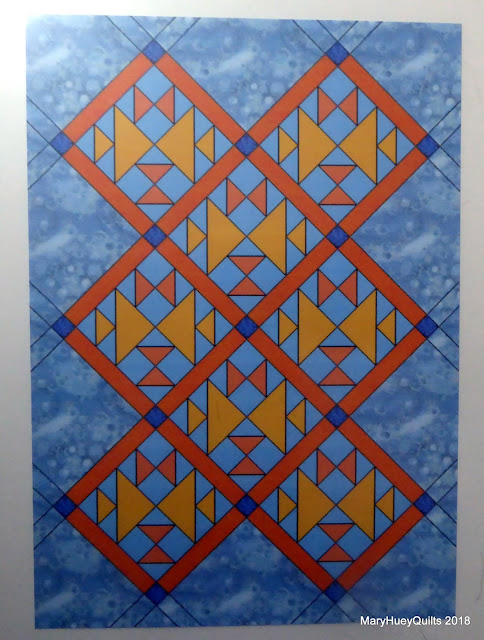 Then I trimmed it and cut off the corners so I'll know in the future to put those on last! 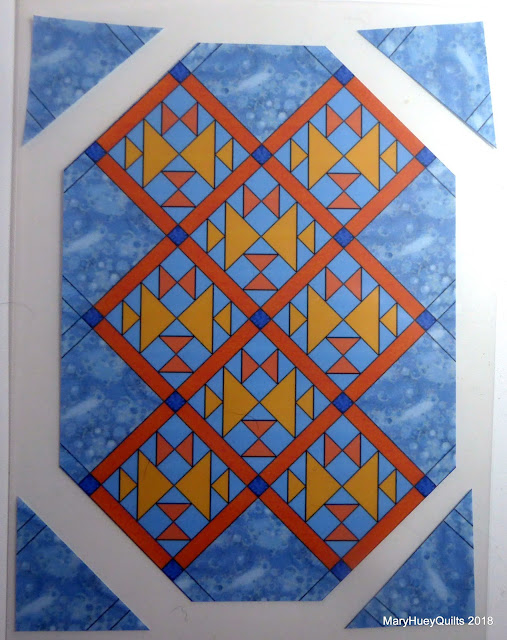 Finally I cut it into rows with the setting triangles included.
Notice that the sashing is on both sides of just one row -- that eliminates potential "partial seam" situations that can occur when adding the setting triangles -- you don't need to test that theory, I already have and believe me, it happens!
Now I never have to figure out "how to proceed" -- I can just proceed!! 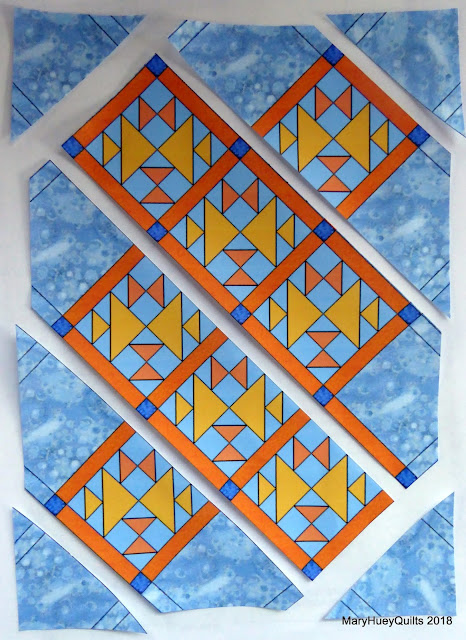 I still need to organize a backing and then it goes into the quilting queue for a week while I finish the quilting of another UFO!  It's been an energizing four days and I hope I can maintain my momentum.  With over 80 UFO's, I need it!!