In this part of the world, the August full moon is referred to as the "sturgeon" moon -- it's a large fish that use to be abundant in the Great Lakes on the US/Canadian border and it was traditionally easy to catch during August.  It's a large fish and a perfect match for on of this year's "super moons".

It's been several years now since I developed my "full moon" strategy.  Perhaps I've had too many ER nurses as students over the years, but I believe that life gets weird with each full moon.  For me, it's not unlike PMS -- I'm more easily agitated and impatient for sure.  So I have six points to my strategy that help me stay calm and productive during the 5 days around a full moon.  Yesterday, I was feeling the effects -- that super moon was bearing down on me and I needed to settle down and enjoy the day!

One of the strategies is to "finish something" -- it works for me because I like the positive buzz that comes with a finish!!  Happily, there was a small quilt layered up and ready to go!!  So I spent the afternoon alternating between quilting and weeding -- perfect day!!

As I was quilting I thought some of you might appreciate seeing the "route" I traveled across the quilt.  It took about 15 minutes of tracing my finger around the design to choose a path that resulted in only a couple starts/stops (except for a few broken threads . . . . grrrrr).  So here is a series of pictures that trace the path.


Since the continuous curve arc generally gives me my best quilting, it is the basis of this design. 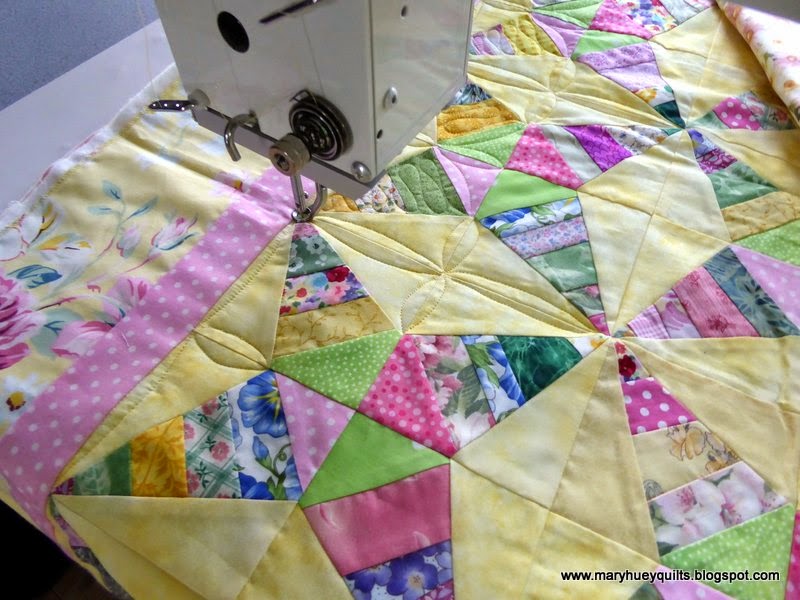 I started at the end of a row and squiggled down each string-pieced wedge being sure to end at a triangle corner which set me up to move easily into that section. 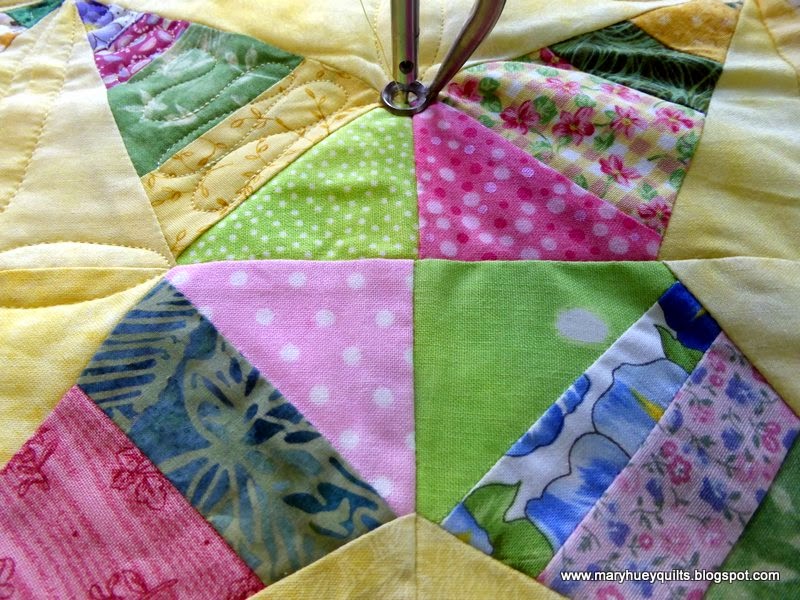 After several "finger tracing trials", I determined the most efficient route was to only do part of the four-triangle unit. 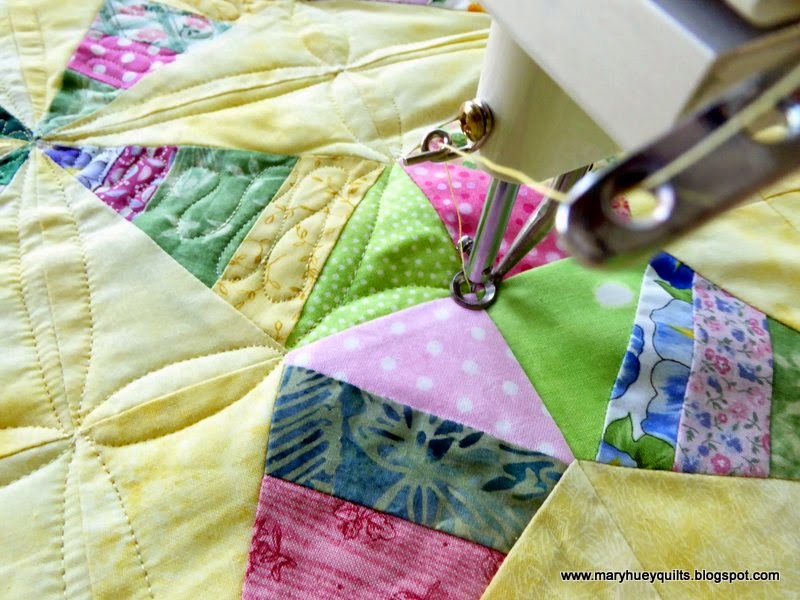 This put me in position to move right into the next wedge easily. 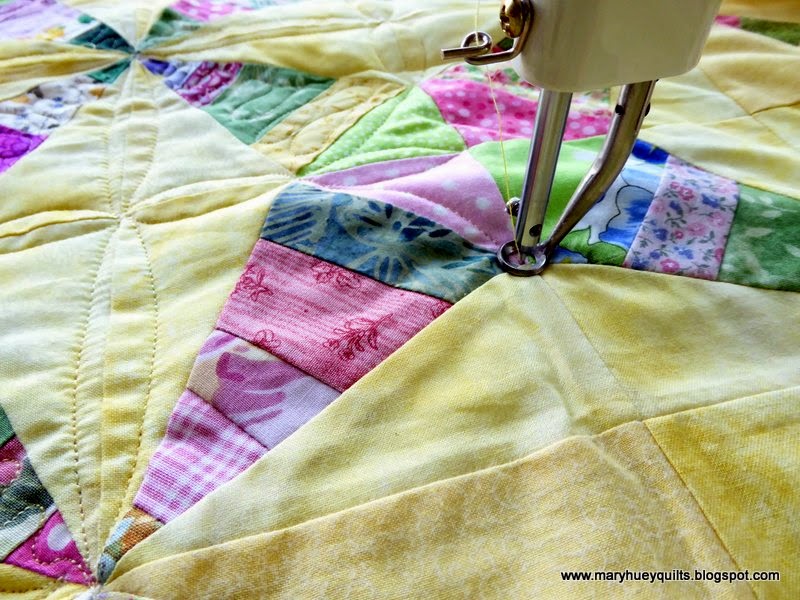 From the tip of the wedge, it was easy to move out into the yellow background areas and create a soft design. 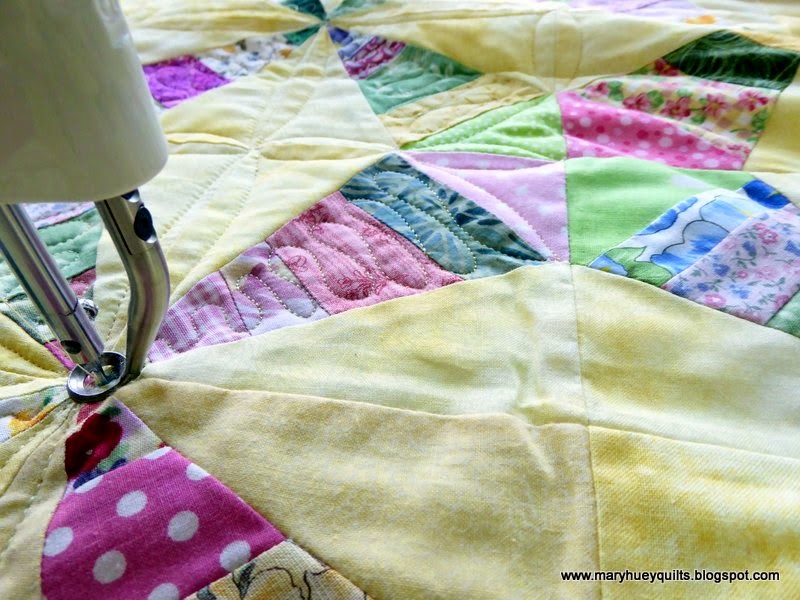 I could have added a curlicue from the center out into each triangle without creating stops or starts but preferred the softer hand of a simple design. 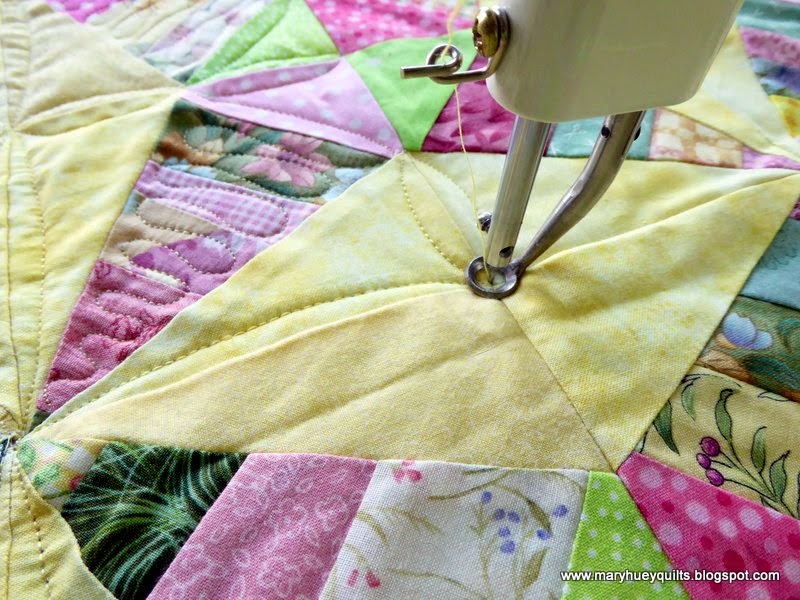 I could do half of this area and pick up the other half on the next row, too -- either route worked and I did both. 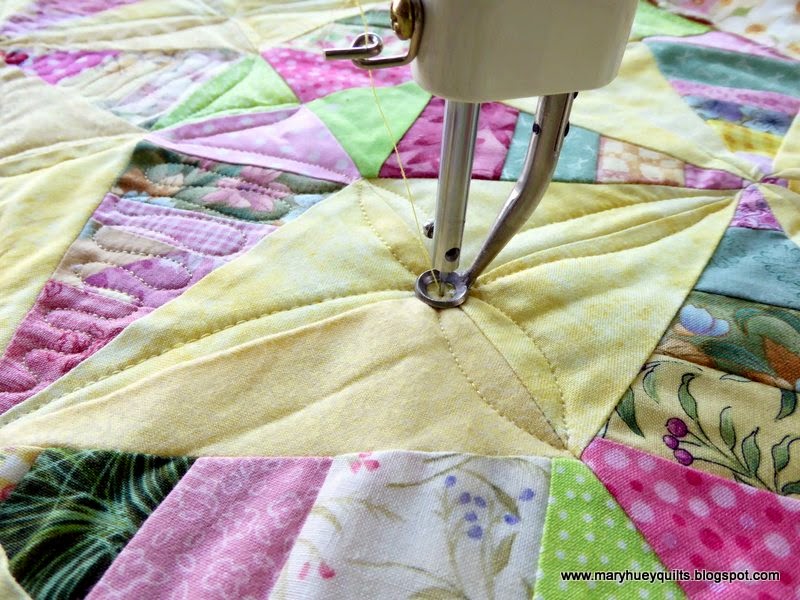 Once at the end of a row, I was able to move smoothly to the next row through the yellow section. 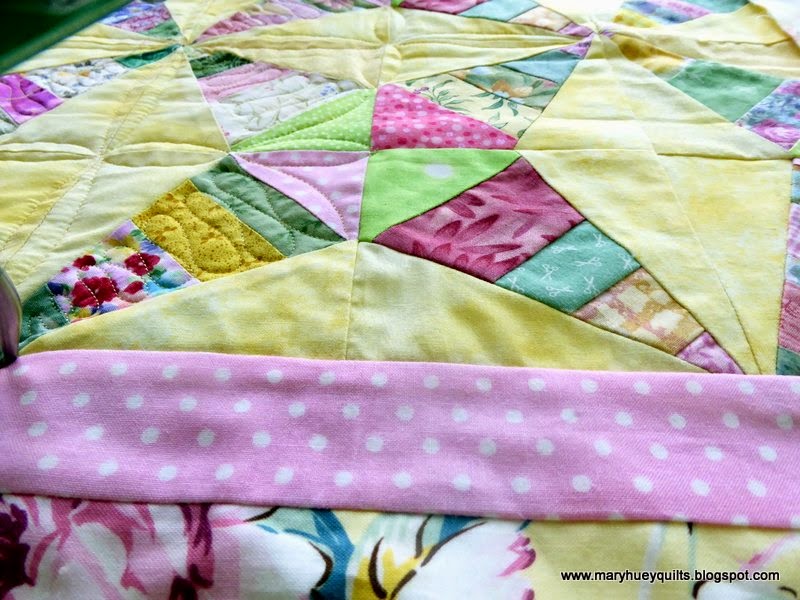 And here I am at the point of a wedge again and ready to squiggle down the first wedge of the next row. 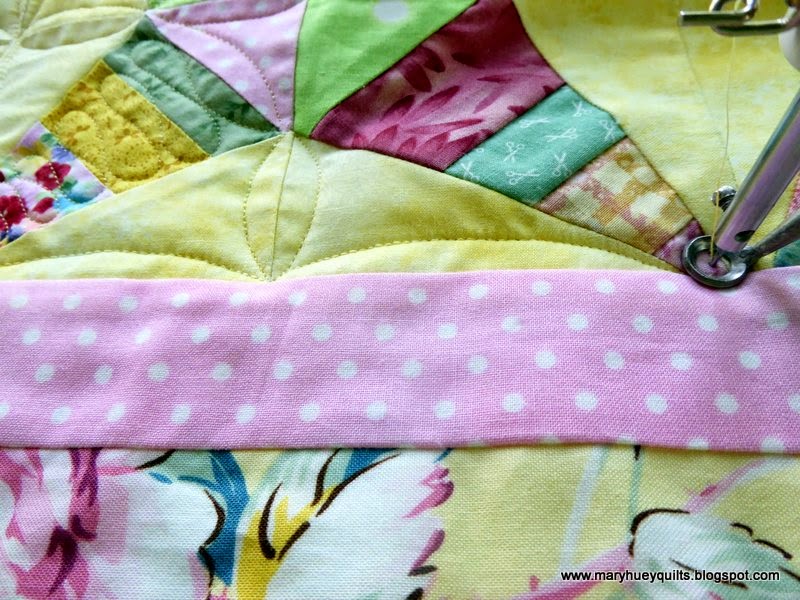 It took a couple hour-long sessions to complete the interior of the quilt.   I'm always a bit surprised when the quilting goes so smoothly and quickly!  I really should do it more often. 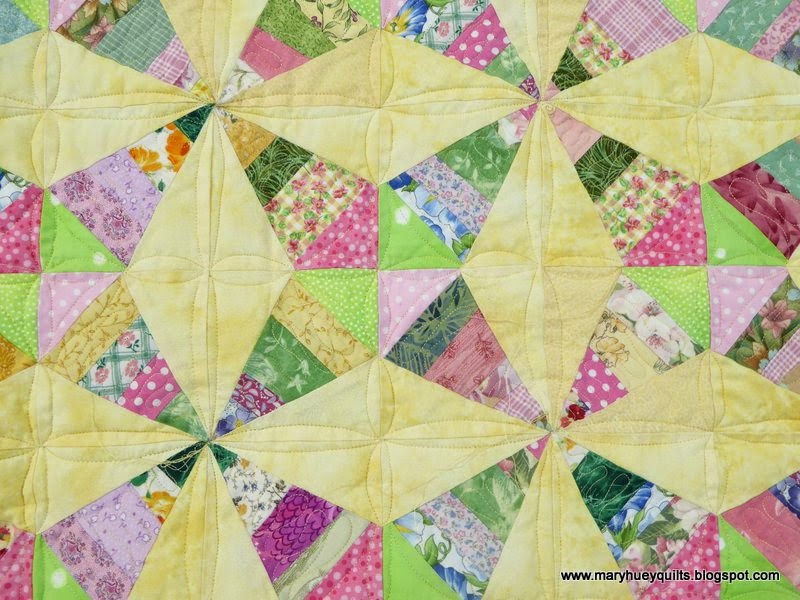 The quilt isn't very big -- each of the wedge units is 4" square and I made it as a teaching sample using a box of scrap strips and Marti Michell's Set D with some help from Set B.  It's so sweet -- I hope it will end up in the possession of a little girl! 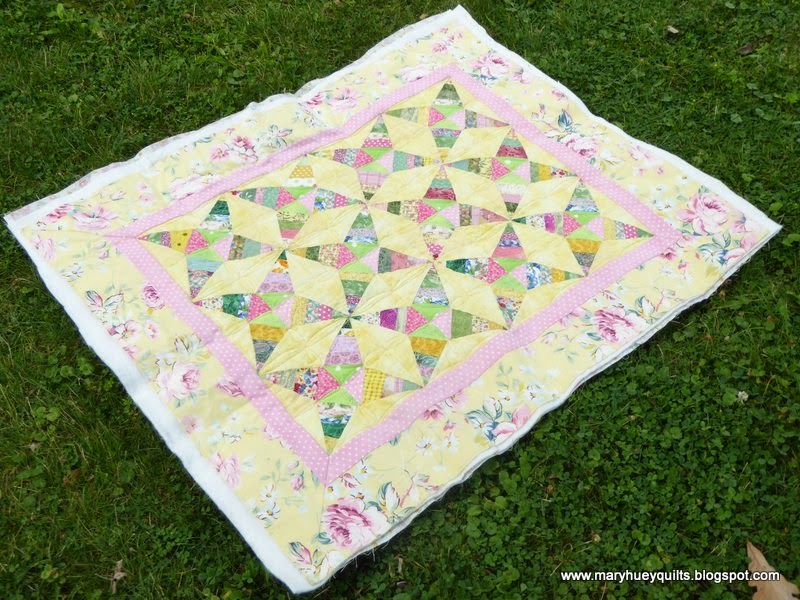 Today I'll take on the borders and maybe by the end of the day, I'll have a quilt ready to bind!! 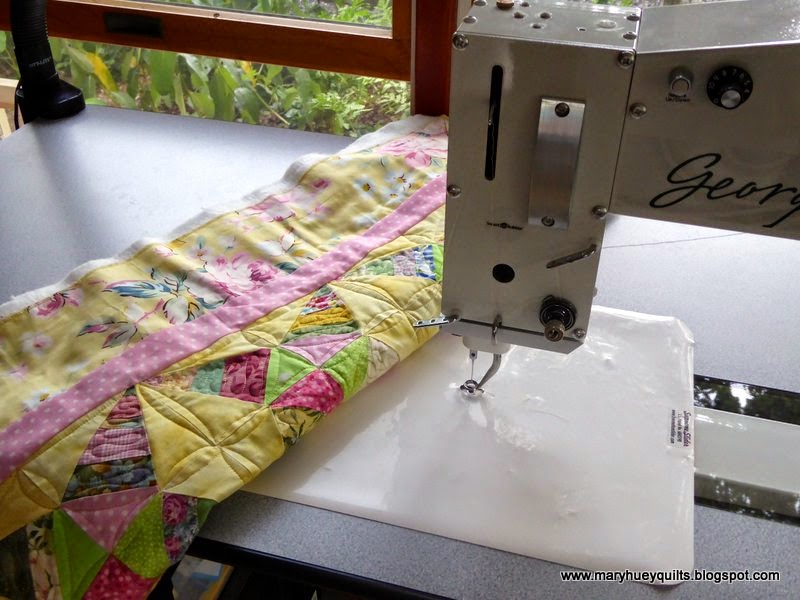 I hope I have more of that pink polka dot as I think it will be a perfect binding!  And it will feel good to have a finish for the month of August.  I had one "finish" in July but no "starts"!!  I'm hoping to repeat that for August -- it's so good for my UFQ Assault Tactics!!

What will you do today to counter the Sturgeon "Super" Moon?