The Missouri Star is Block #11 for Little Bunny Quilts QCQAL -- I've never pieced this block before and I like Alison's instructions for making the star point units.  I've the "fast flying geese" method before but never with a split triangle.  I'd like to try it on a future quilt. 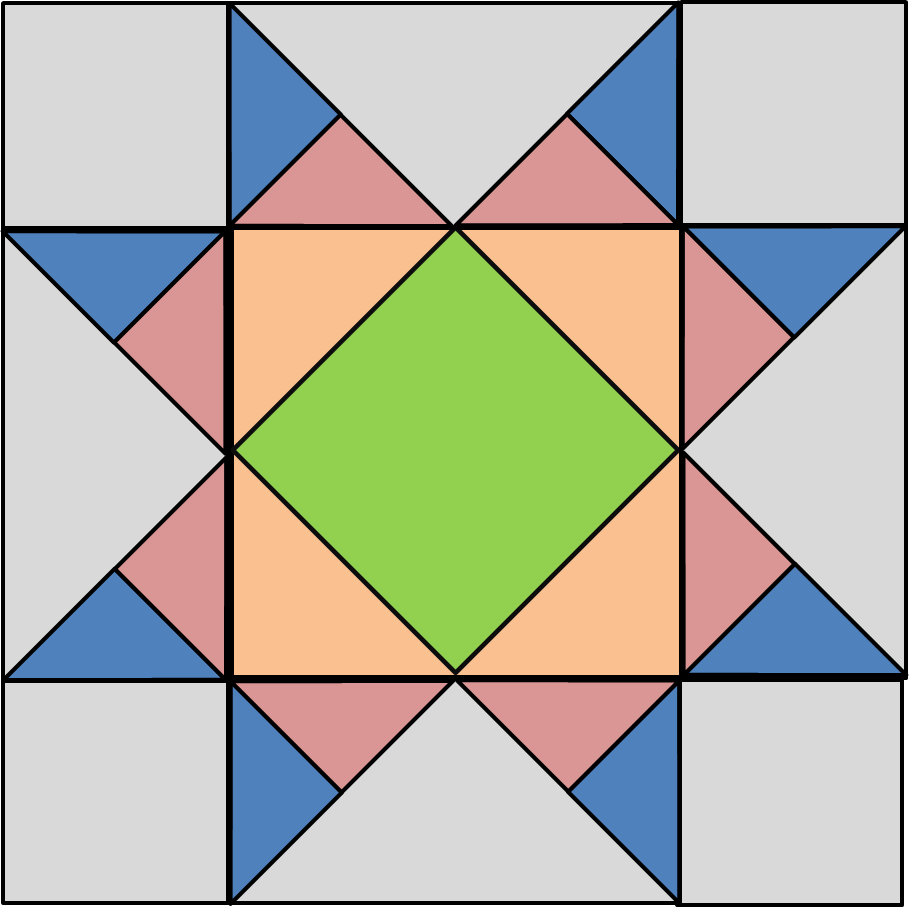 I can make this block using Marti Michell's Set A template set -- it's the 3" basic set.  My background fabric is almost gone and this week Alison announced that she'll be posting some bonus blocks so participants can make a bigger quilt.  My plan is to make blocks until I run out of background. 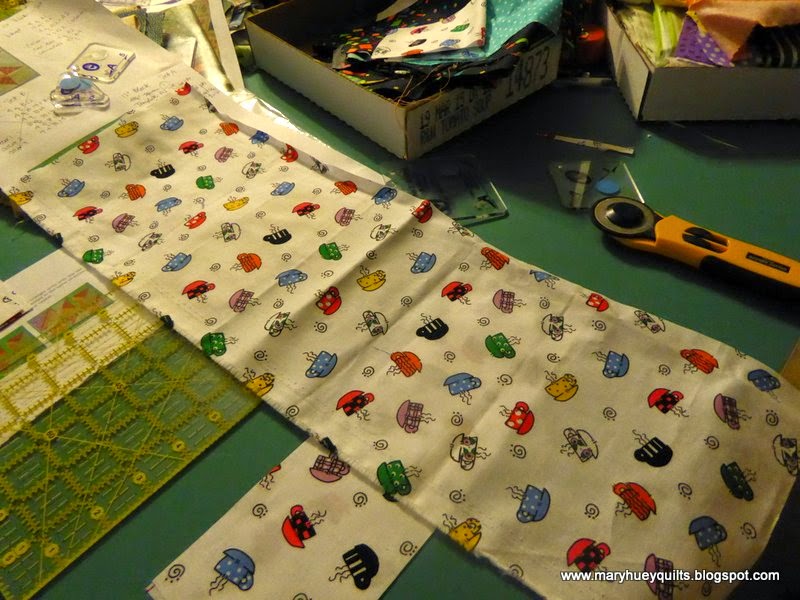 I'll use A2 for the center triangles and the "goose" triangle, A4 for the split triangle star points, and A1 for the corner squares. 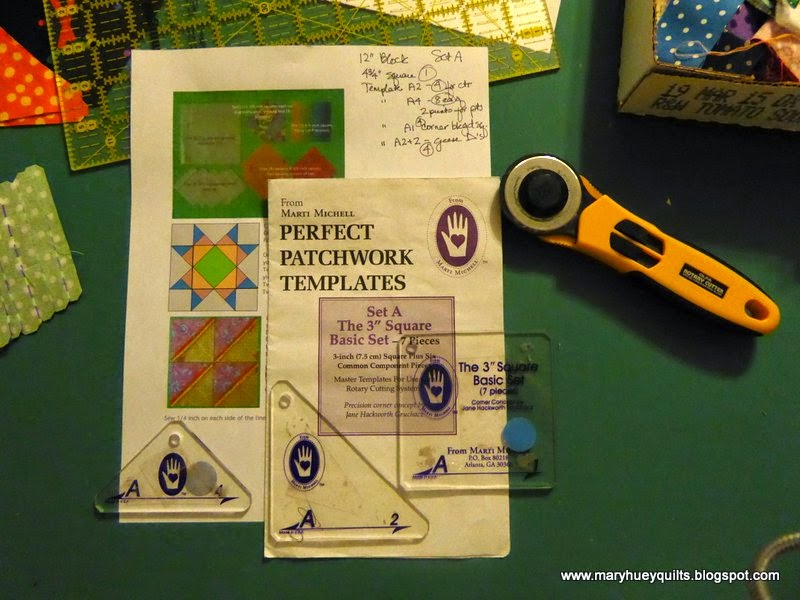 I started cutting with the center square -- it's 4 3/4" and came out of my "swiss cheese" focus fabric. 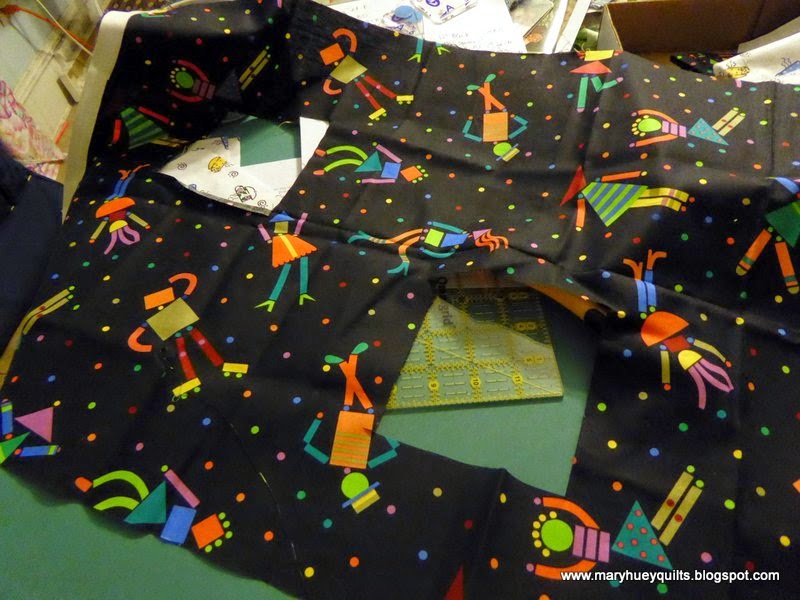 Then I auditioned for the triangles surrounding it.  I intuitively liked the effect of the focus fabric against the orange -- first picks are usually the right ones! 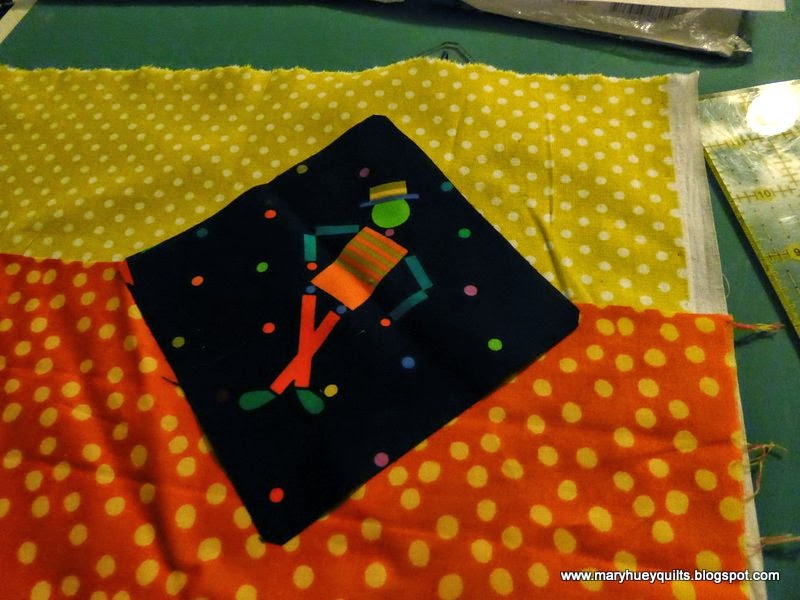 All the background pieces were cut from the same strip -- it's one of the advantages of the trimmed corner triangles!! 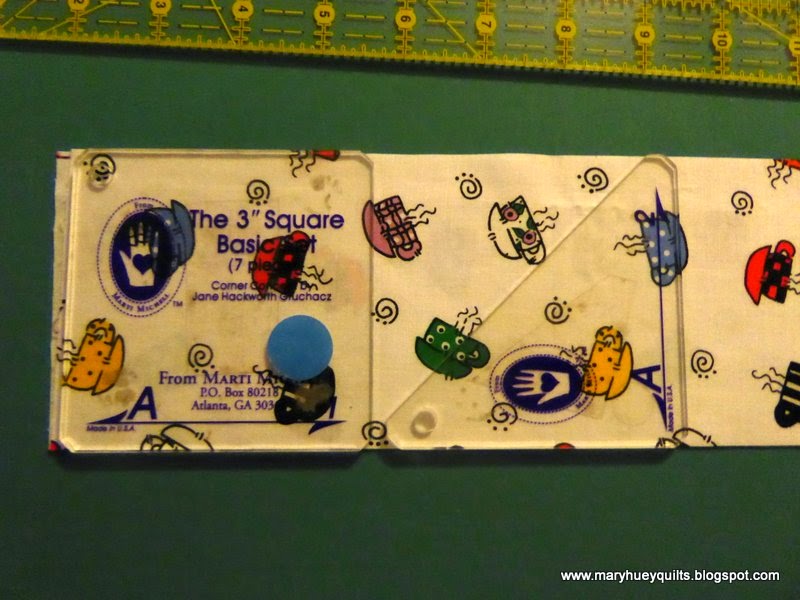 And to cut the "goose" units, I twisted the A2 template around, matched it to the first cut and then cut on the right side.  Marti includes instructions for doing these "plus" cuts in the leaflet that comes with the template set. 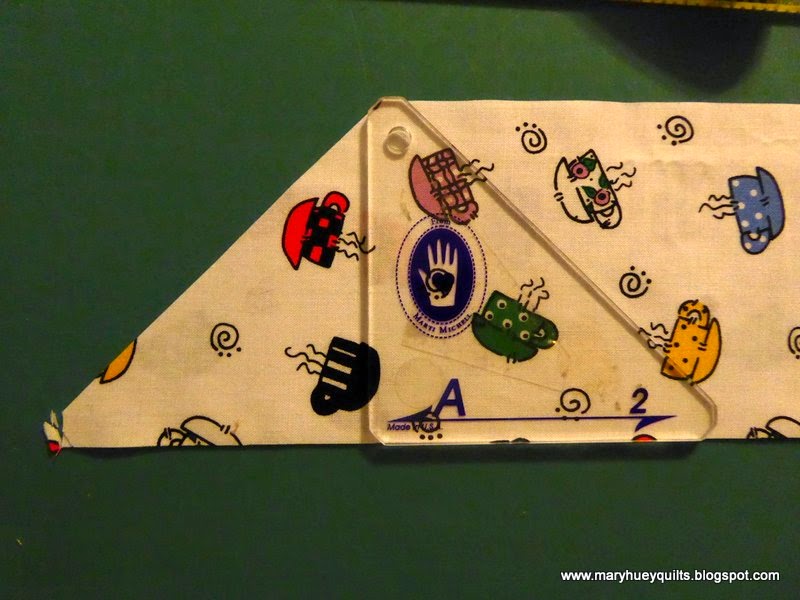 The green and purple will be the split triangles and can be cut in pairs that are ready to stitch -- notice that the grainline arrow on the template is laid horizontally on the strips.  That keeps the stretchy bias away from the outside edge of this unit. 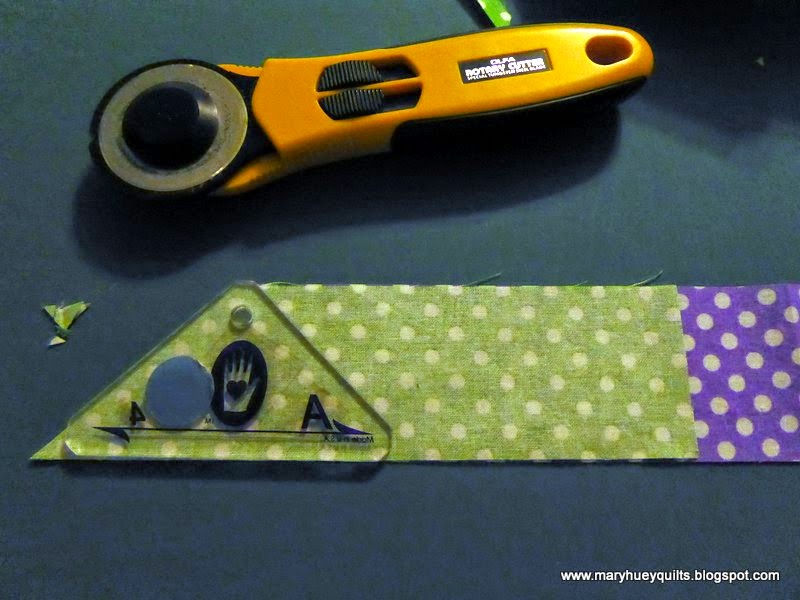 And that is the end of the green polka dot -- might have to put that on my shopping list to replenish! 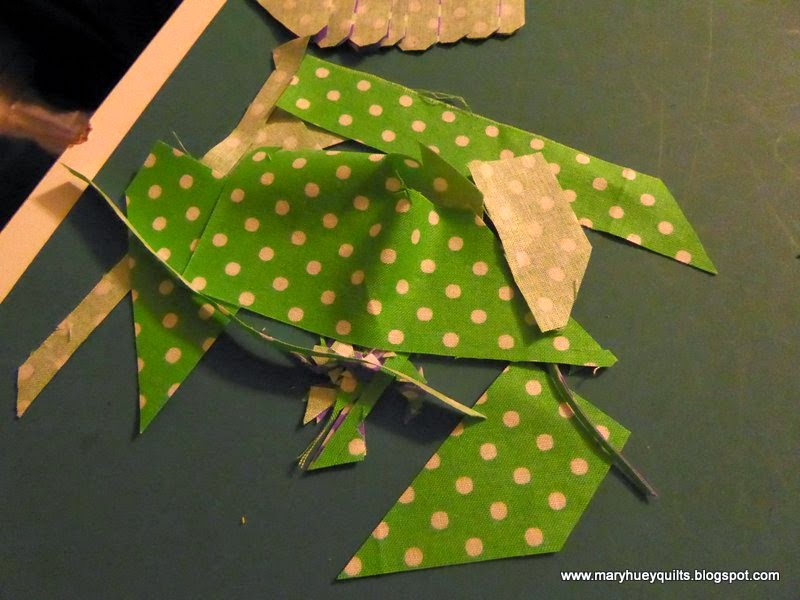 I laid out the block and realized the split triangle units are "rights" and "lefts" before I started sewing!  Thank goodness, no ripping was necessary for a change! 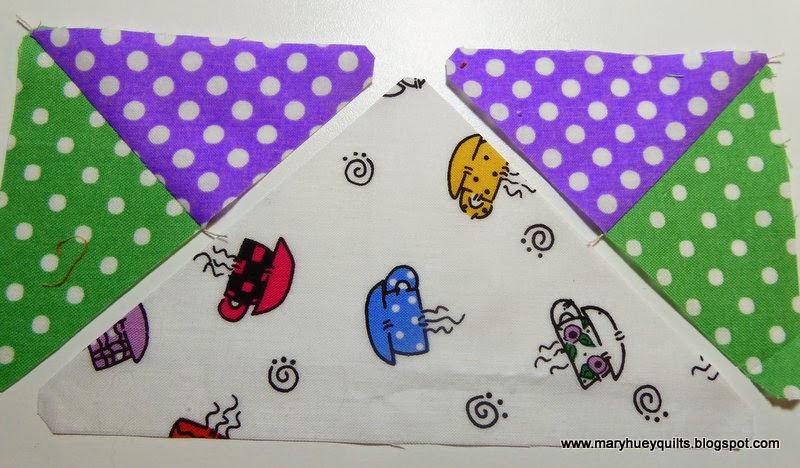 These look the same, but they aren't!! 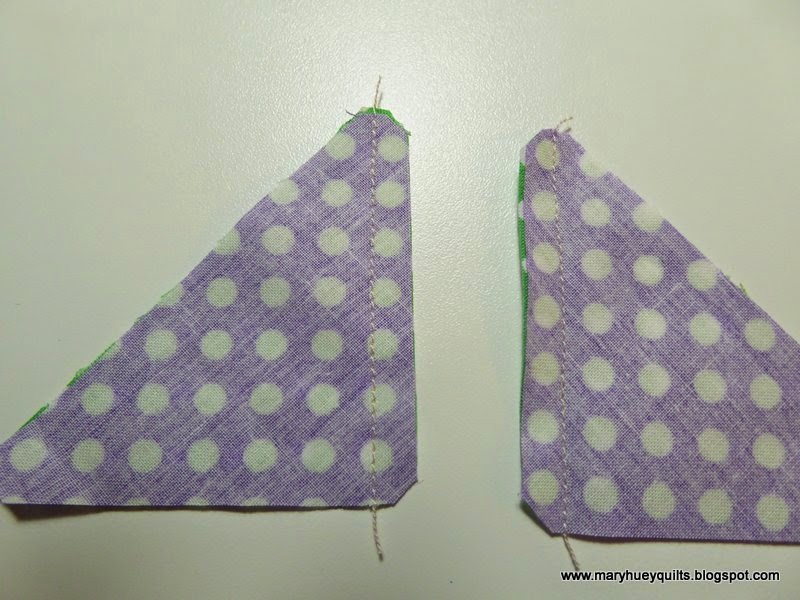 And I love, love, love how the trimmed triangle corners match up to the trimmed corners of the square perfectly -- means my 1/4" seam is accurate and the finished unit will be a true square. 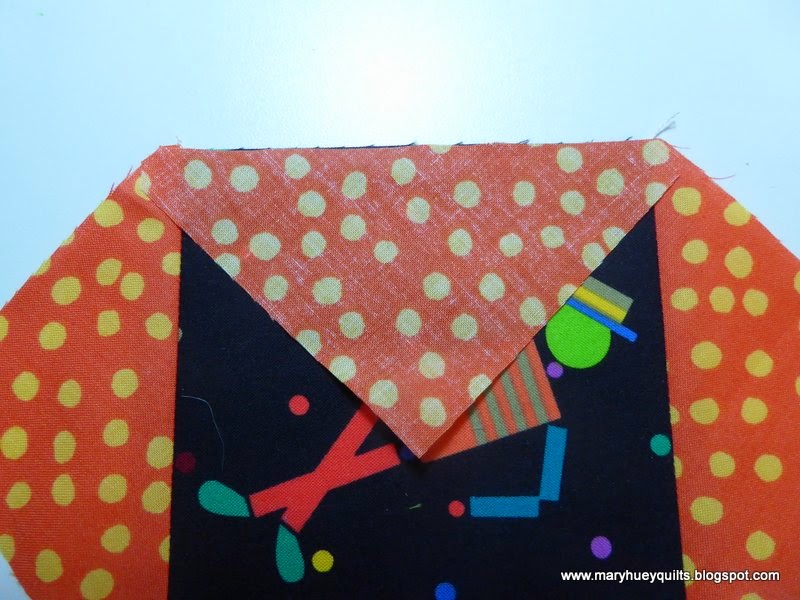 I did one more audition once the units were assembled -- green in?  Lavender in? Once again, it was an intuitive decision.  If you have trouble making that sort of decision, put up the alternatives and then leave the room for a few minutes.  When you come back and first look at the piece, listen to what your brain says in the first moment!
That's your intuition and it's knows what it likes!
We just have to listen to it more often. 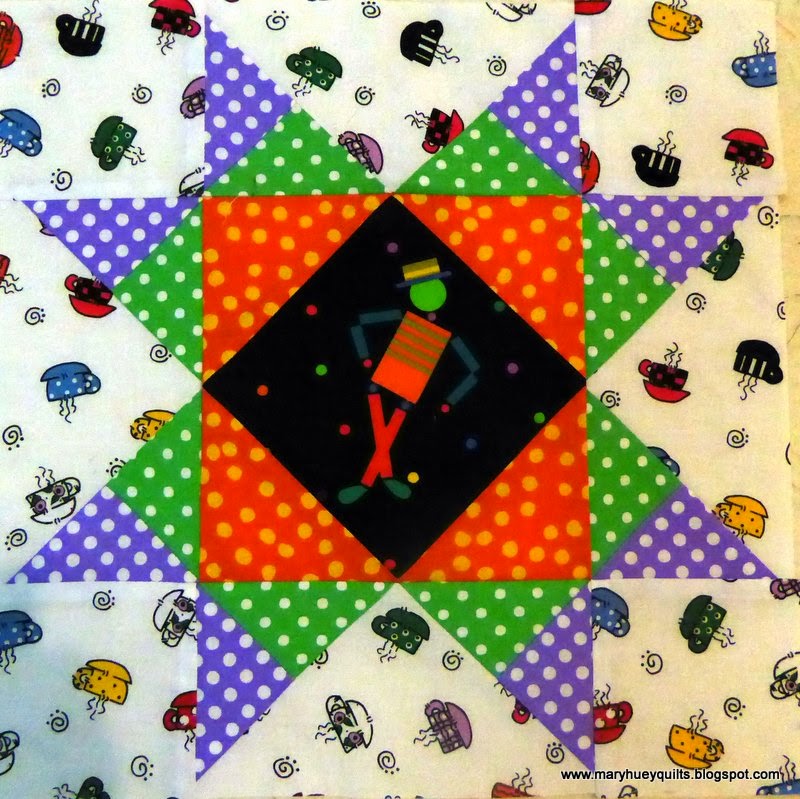 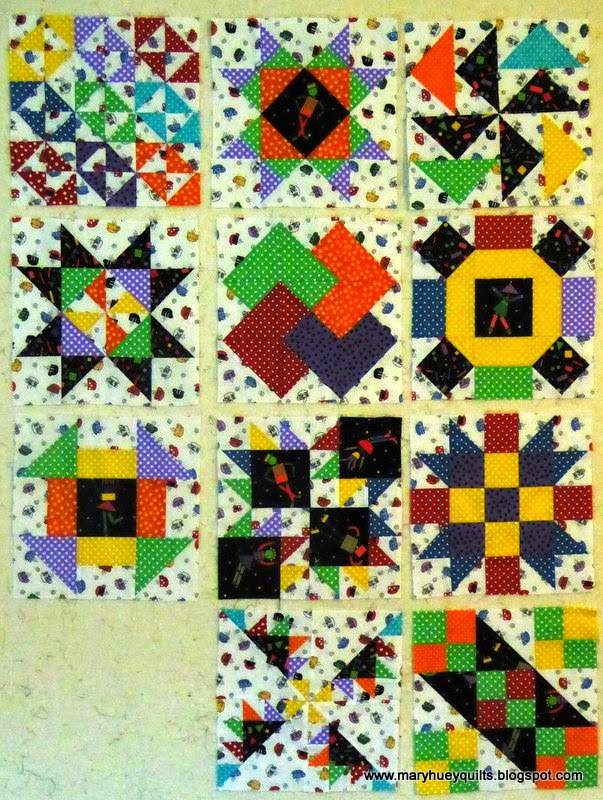 I hope those of you who own templates from Marti Michell have found this series useful in learning more about applying Sets A and B to a wider variety of projects.  It just takes a glance at my blocks to see that despite being many different grids (6 by 6, 4 by 4, etc.) all of the blocks are uniform in size and that makes the final assembly of any quilt top so much easier!