Finally, Card Tricks won the voting for Little Bunny Quilts QCQAL -- it's been nominated several times.  This has been one of my favorite blocks for many years so it's fun to have it become part of this quilt! 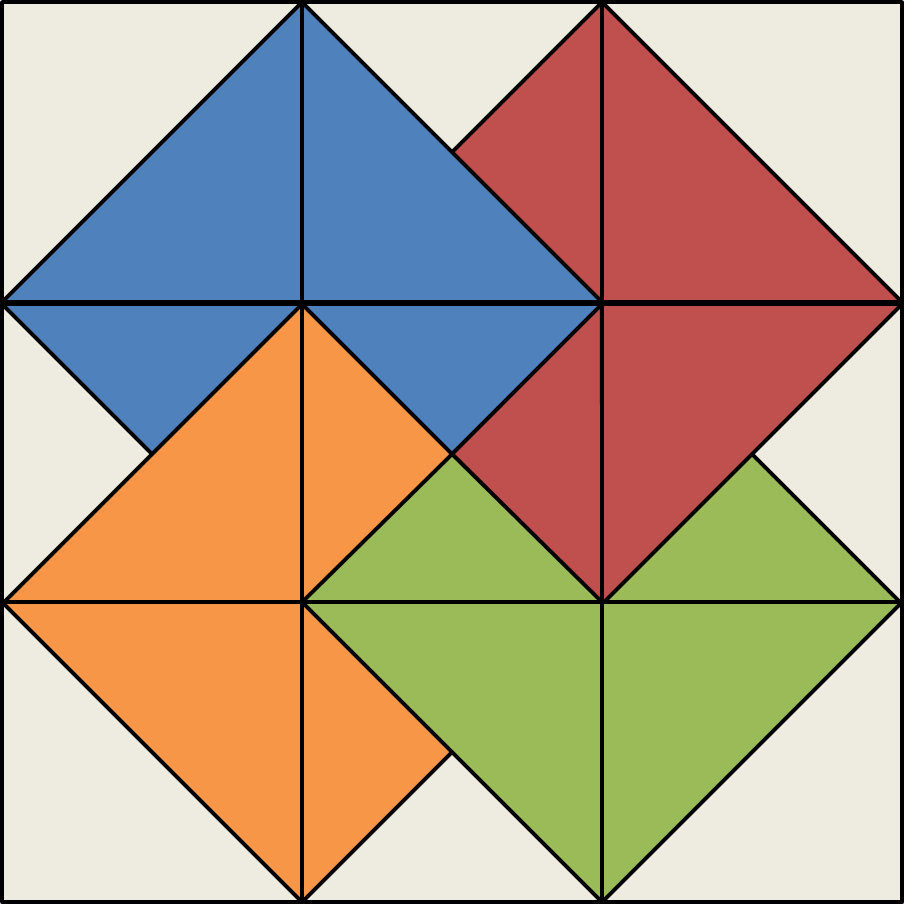 If you are a new follower, I've been blogging alongside Alison at Little Bunny about how to make the blocks for the QAL using Marti Michell's rotary cutting templates.  In general, every block has used either Set A or Set B -- not surprising as these two sets are the foundation of the entire system of tools.  I always start by doing a bit of basic math (12" divided by 3) to determine which templates are needed.  The upper pair of templates (#9 and #11) will make a 12" block and the lower set (#13 and #14) will make the 6" block.  Notice that I've written down how many of each piece I need to cut -- I don't trust much to memory anymore because sometimes I just can't get into my "cloud".  (-; 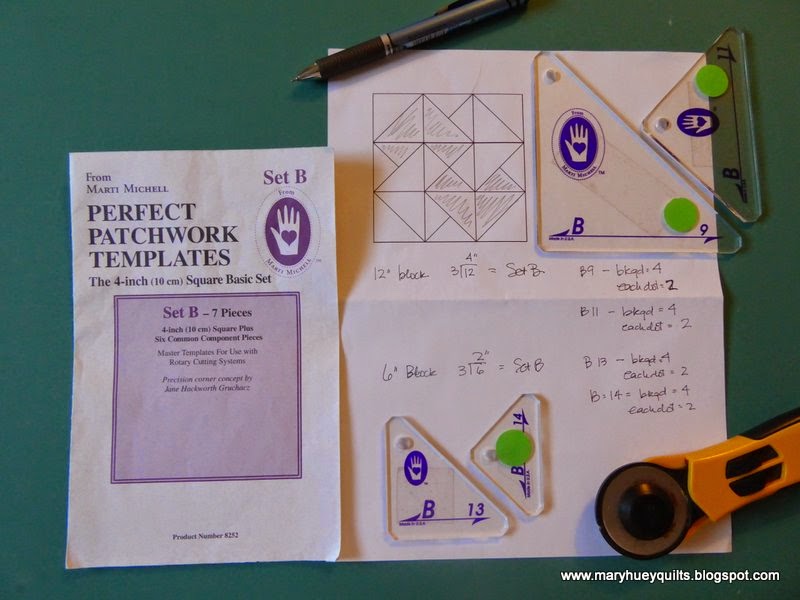 The larger triangles are cut from a strip as you would expect. 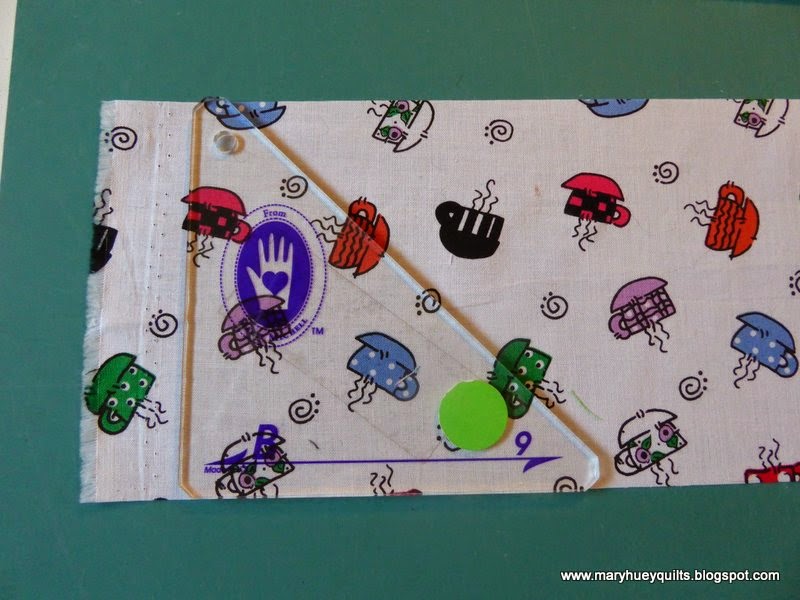 The smaller triangles though need to be cut with the grainline of the template on the straight grain of the fabric so it lays on the strip like this and the measurement of the strip equals the distance from the long flat side to the opposite corner. 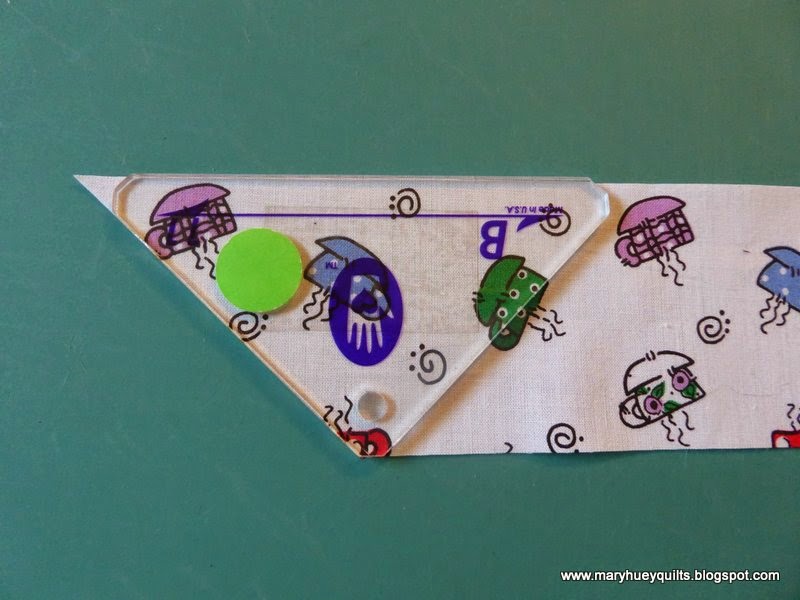 Since I don't need much of the polka dots,  I decided to just layer up the four colors and cut a stack of each from a clump of fabric rather than cutting strips. 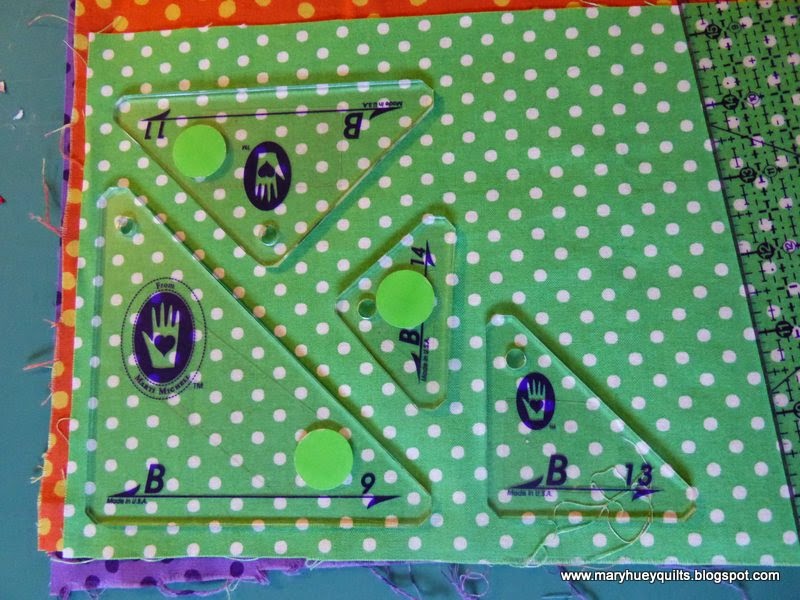 It seemed like a good idea until I laid the blocks out and realized I needed two clumps of each size.  Isn't it comforting to know that I don't read my own notes?  (It does say to cut TWO of each template from the polka dots.) 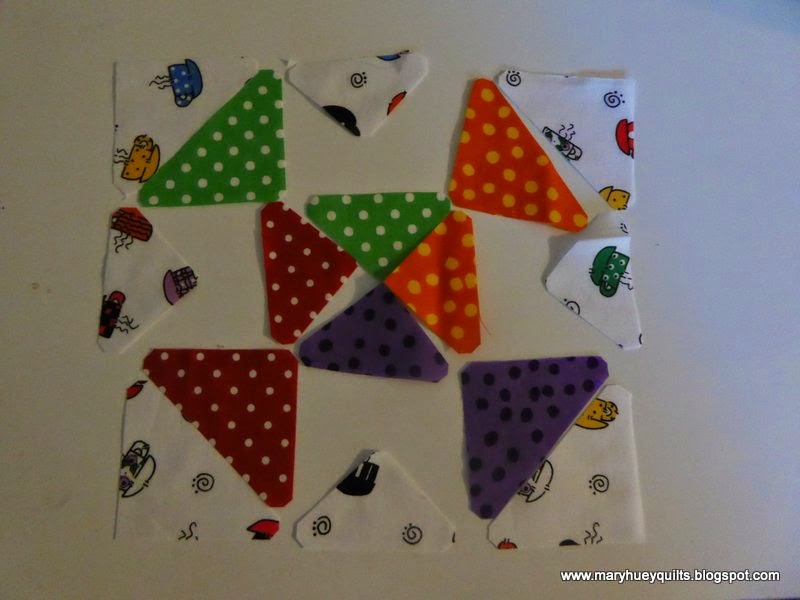 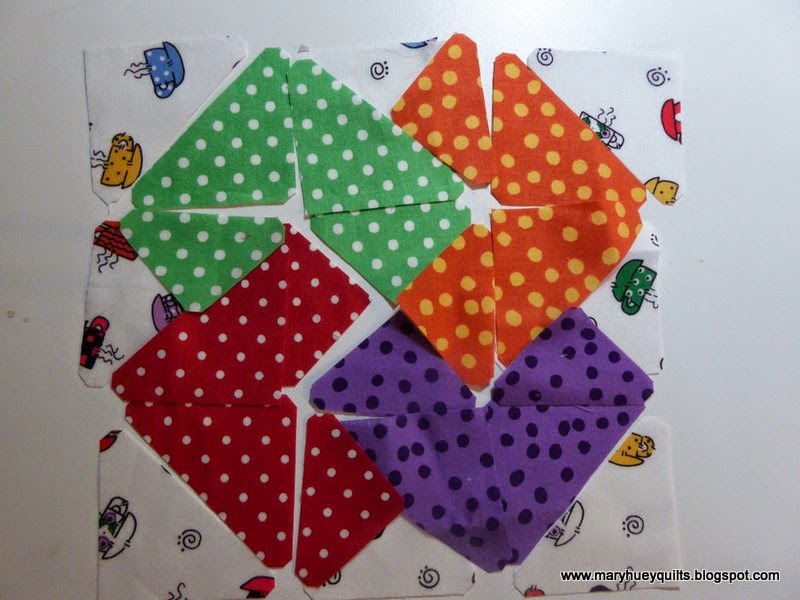 After I stitched together the half-square triangles for the corners of the block, I laid out and stitched the remaining triangle groups.  It's important to lay this block out at every stage.
And then one must actually look at it, because . . . . . this is WRONG! 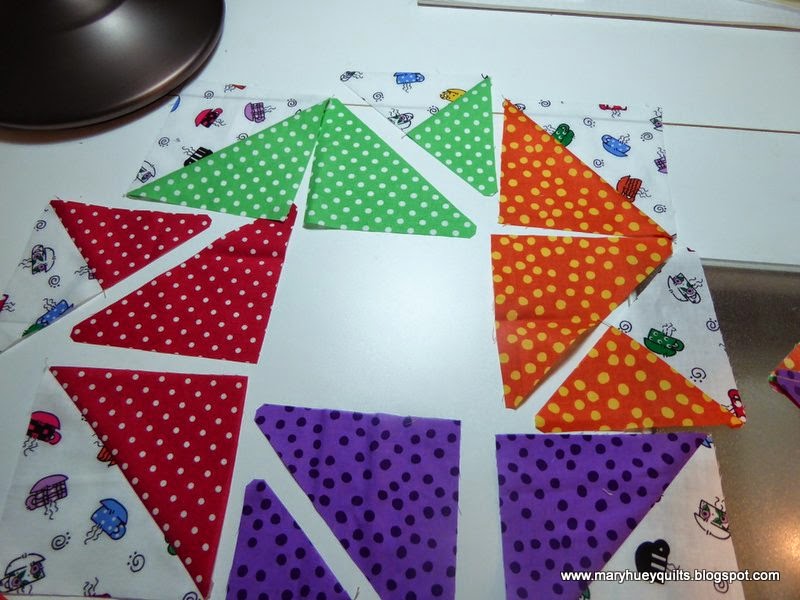 I, of course, had the 3 part triangle sets stitched together before I realized it. 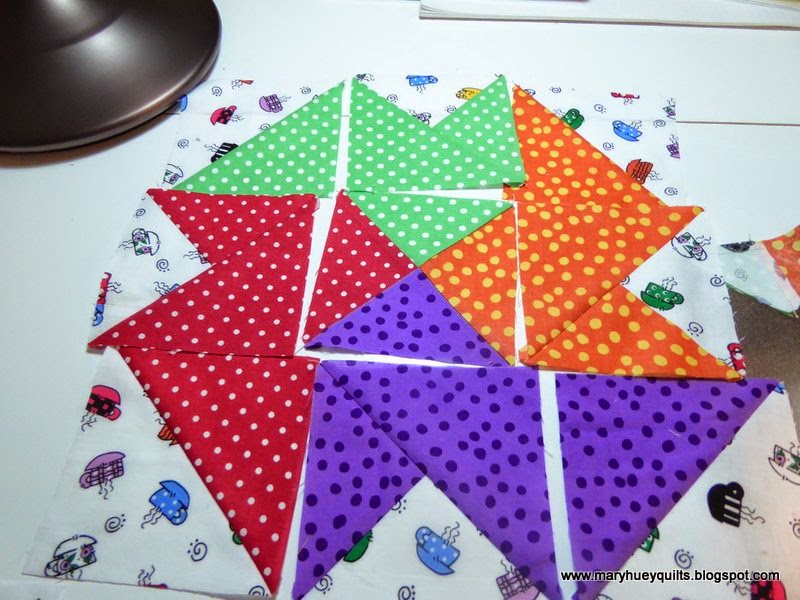 This is how I "rip" (unstitch) bias grain seams to avoid stretching.
Snip every fourth or fifth stitch down the entire seam. 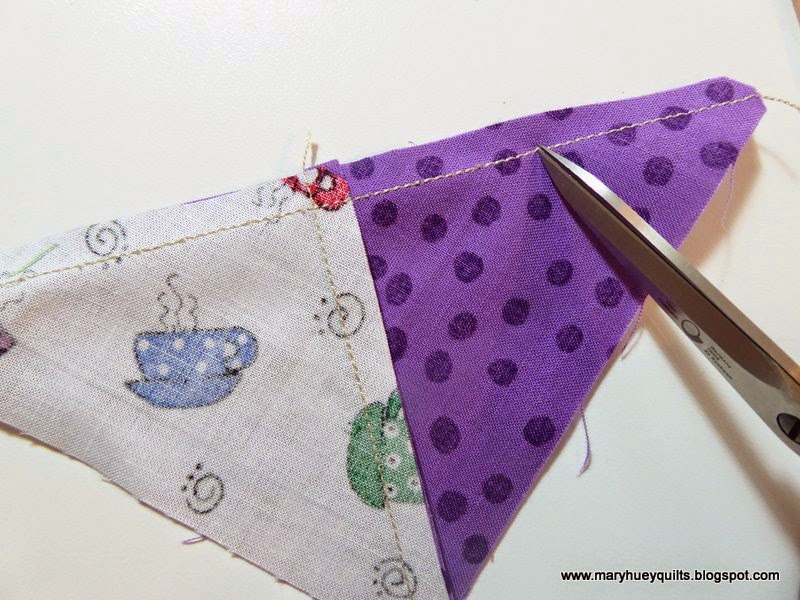 Flip the piece to the other side and poke along gently along the mid-section until you find a place where the thread pulls loose easily. 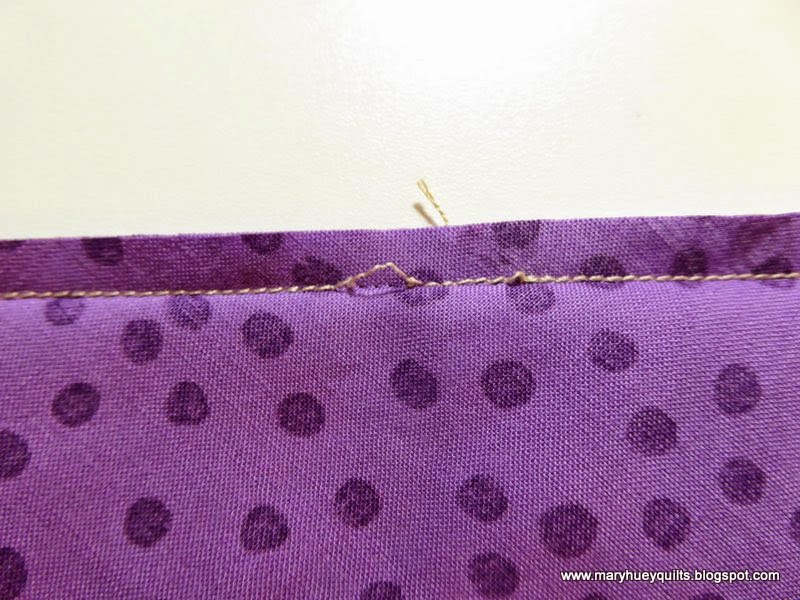 Now pull gently and the entire thread should come up easily without stretching the edge of the fabric! 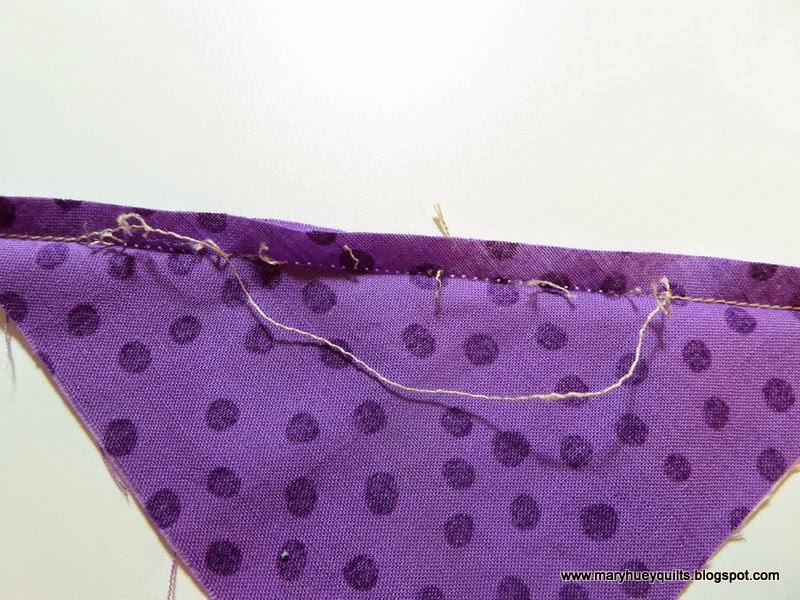 This time, I have everything where it should be.  My mistake was in not laying the center square of 4 triangles in place.
Block #9 is finished -- three more to go.  The voting is open for Block #10 at Little Bunny Quilts! 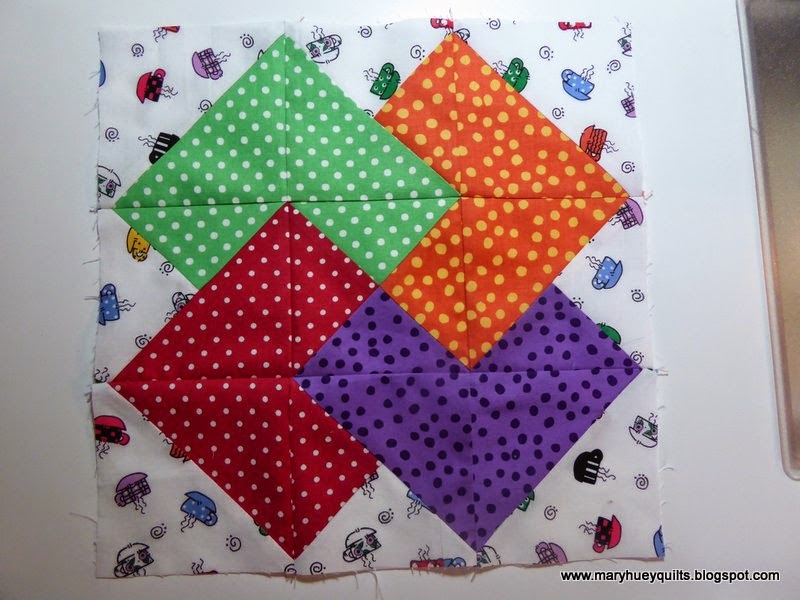 And here's my assortment so far!  Rather busy, but I hope that the sashing I chose will calm it down when I get to that point. 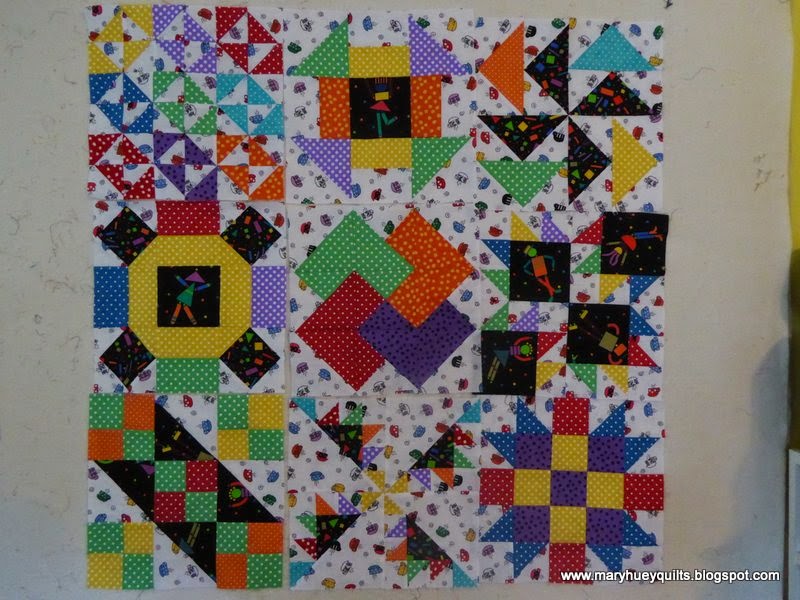 Back to the studio -- it's cool in there and we are having one of those 80 degree days with 85% humidity.  Love it!?!
Mary Huey
www.maryhueyquilts.com