Part of being a Monarch caterpillar is foraging for food and since I'm holding them "captive", I'm responsible for the foraging.   When I first started doing this several years ago, it meant a daily bike ride to a milkweed patch about 1/2 mile from my home.  These days, I just walk around the corner of the house!  As I choose a stem of milkweed to bring to the enclosure, I look around for more eggs -- the white dot on the left leaf is an egg.  They are laid one at a time, rarely on the same plant or even the same leaf -- increases their survival rate!  The little speck on the right hand leaf is a caterpillar emerging from the egg -- talk about being in the right place at the right time! 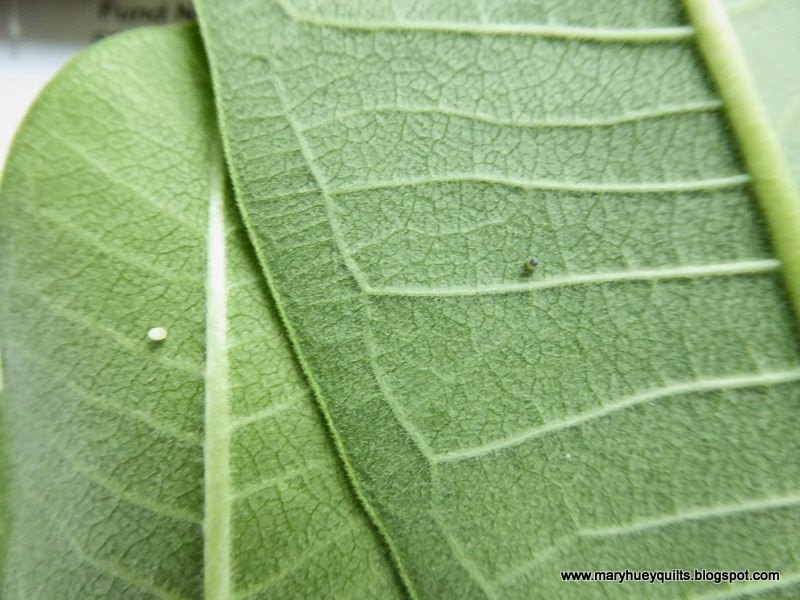 This leaf is in my nursery box and yesterday, three more caterpillars emerged.  They begin to feed immediately and the little holes in the leaves often leads me to a newly emerged one.  The lower hole in the photo below is very typical of a first feeding zone -- the caterpillars are attached by a silky strand and feed in a circle leaving a donut shaped hole. 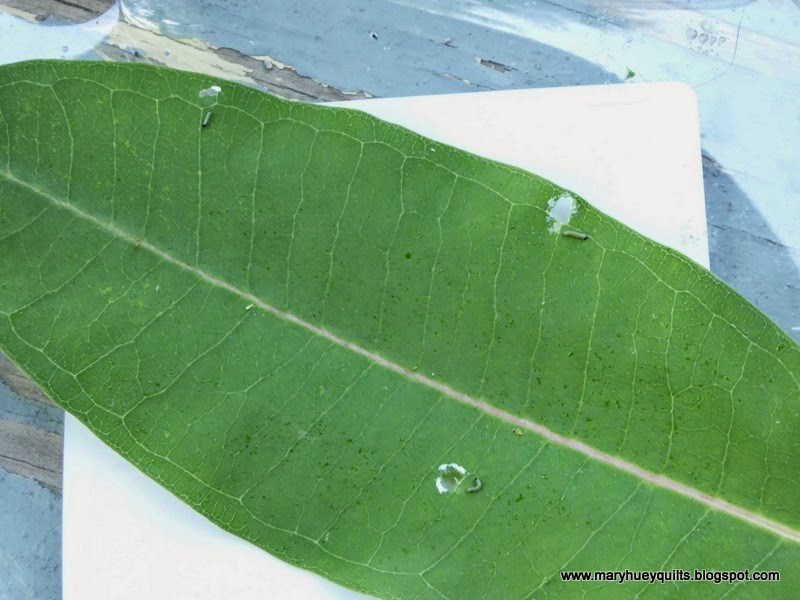 During one of my food gathering forays a couple days ago, I stumbled onto this spider.  She was spread out flat against the stalk and if she was green I would not have noticed her. 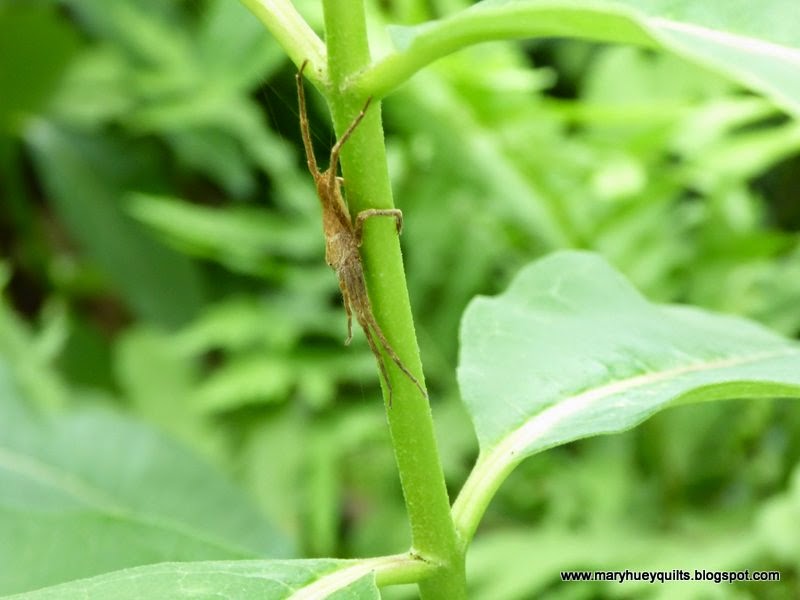 As I took her picture, she moved around the stalk but it was obvious that she had no intention of leaving the area.  She's over an inch long. 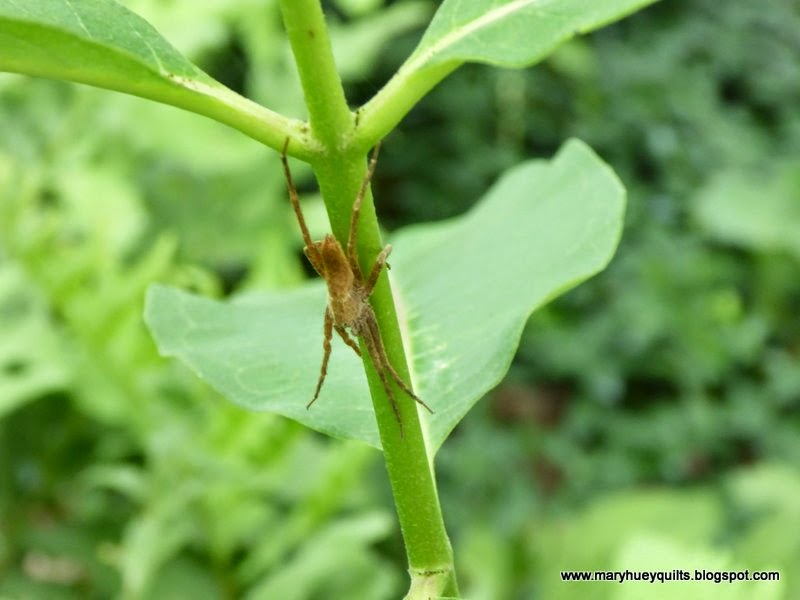 And then I discovered the reason for her determination.  At the top of the stalk was this cluster of a hundred or so baby spiders -- obviously her brood.  It's been three days since I discovered them and the adult spider is still there.  So I looked in my little guide book and sure enough, it's a Nursery Web Spider.  Isn't that interesting?   It will be interesting to see how long the group stays together and how long she stands guard. 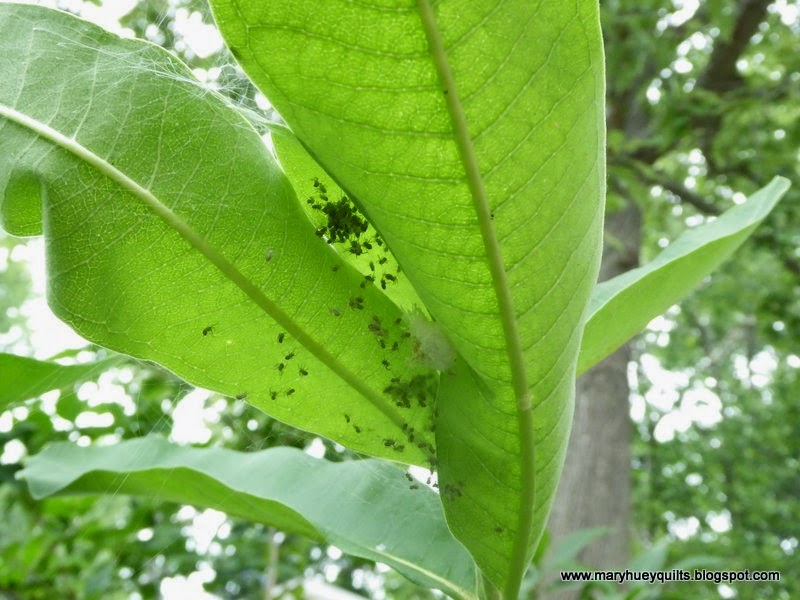 Back in the fostering enclosure, the three oldest caterpillars are eating voraciously and as you can see in the next two pictures, they vary in length from 1" to almost 2".  The biggest one will likely morph into a chrysalis in the next couple days. 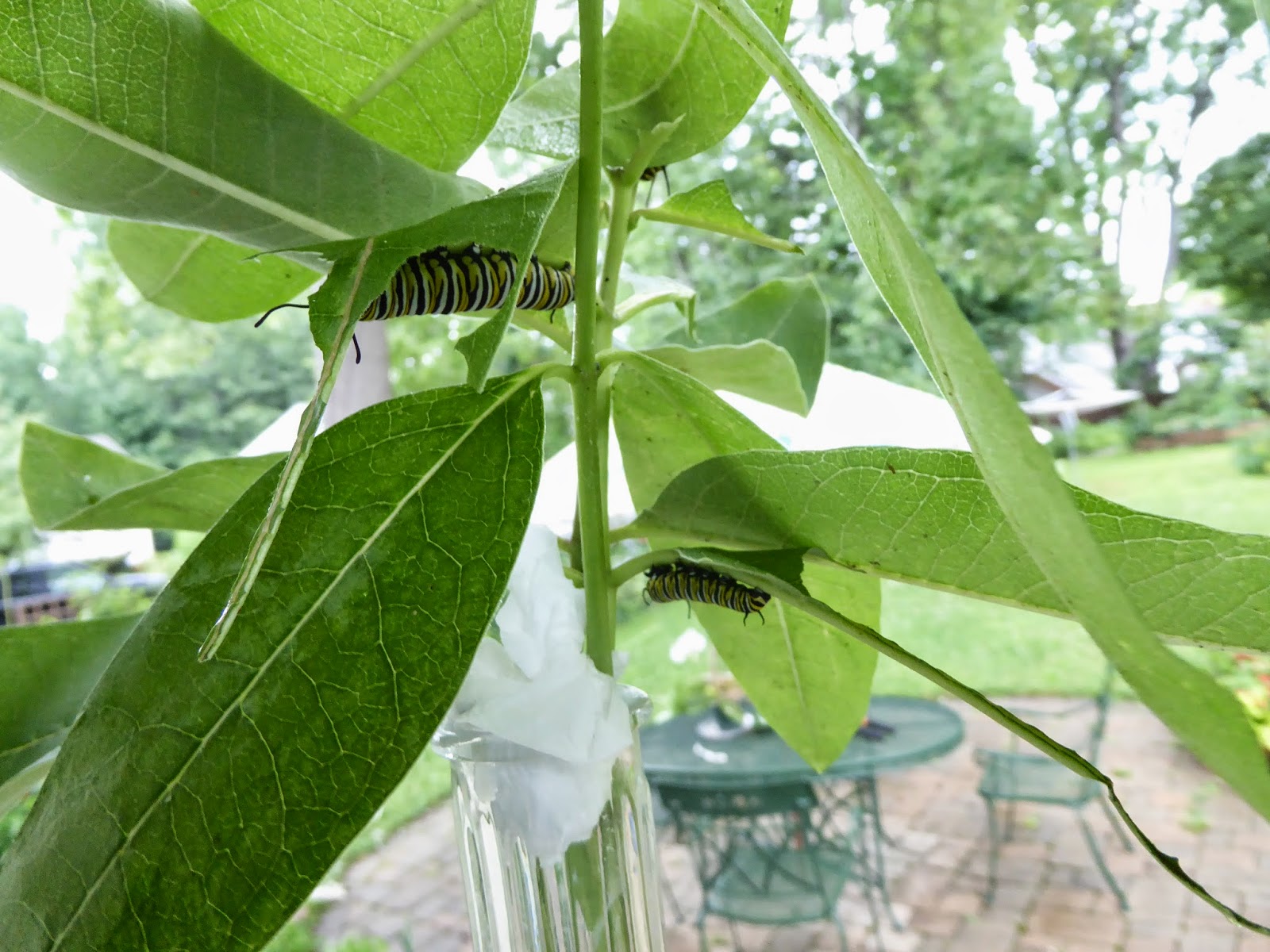 The fresh stalk of milkweed is wet because I wash them off a bit to remove other insects that might be predators on the caterpillars.  With three this size, the stalk will be stripped bare by early afternoon and I'll need to collect another stalk. 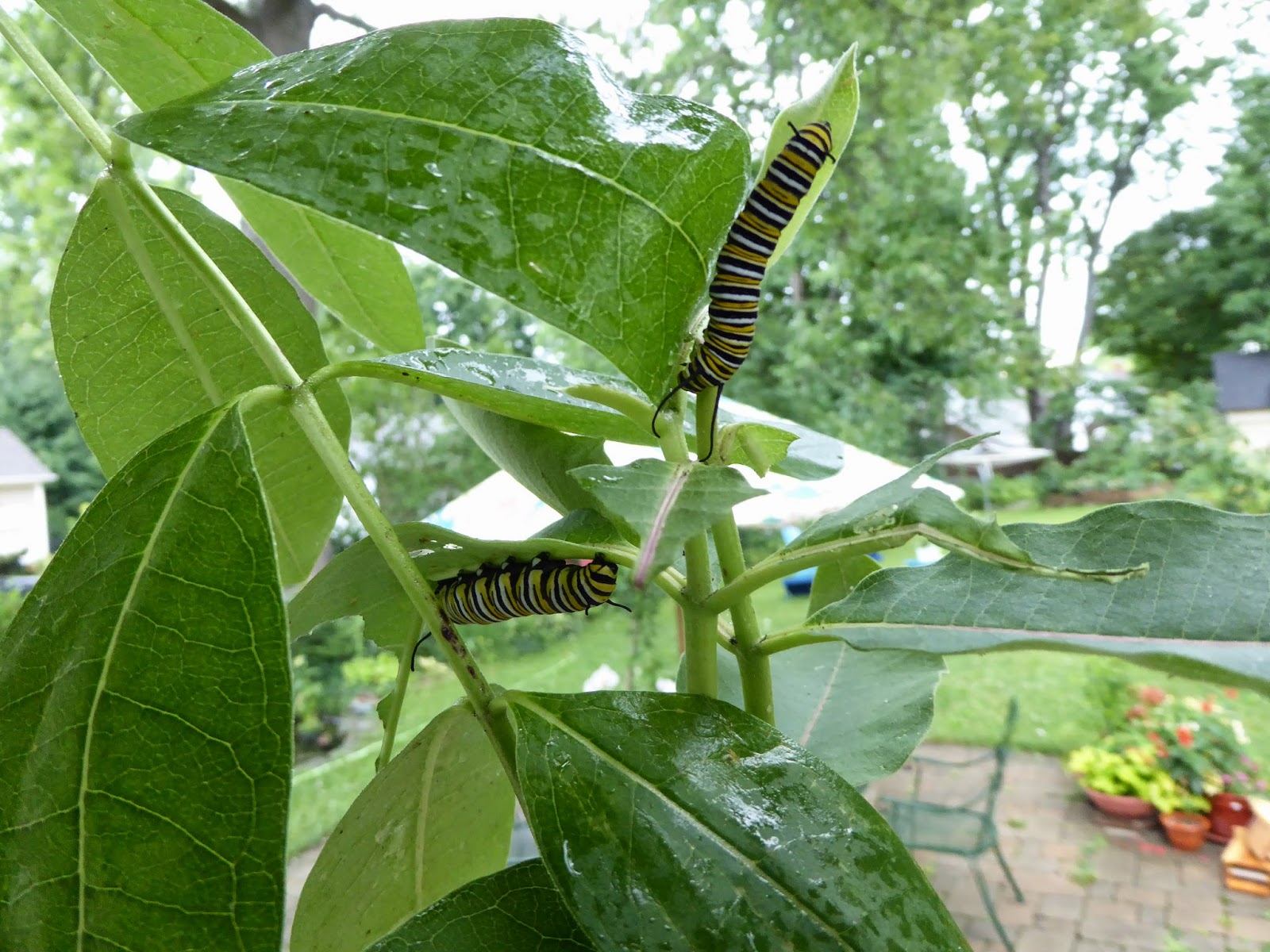 There are seven tiny ones in the nursery box right now -- you can see six of them in this photo -- I provide fresh leaves a couple times a day.  They seem to prefer to feed on the underside of the leaves when they are this size -- a protective instinct I image. 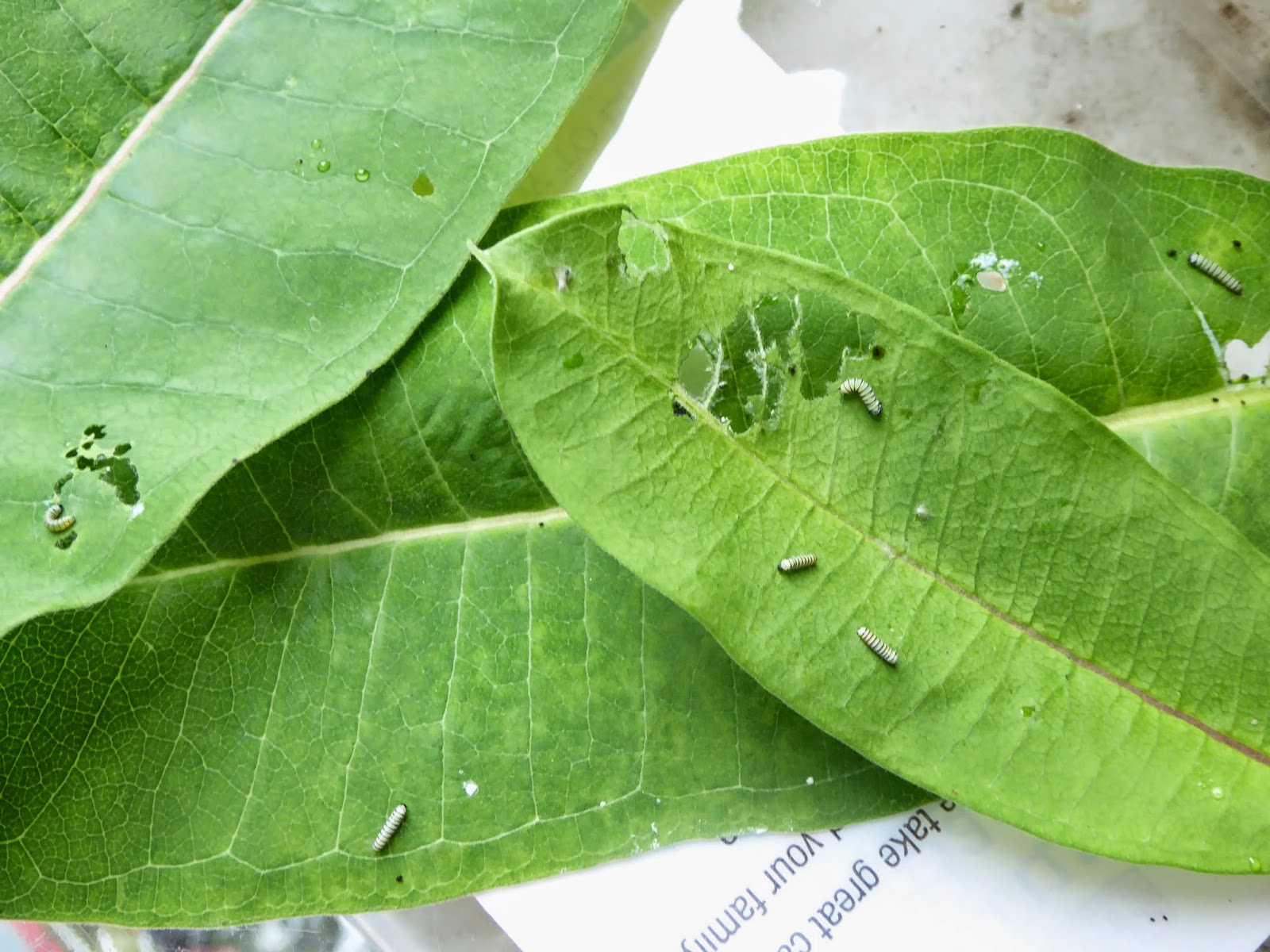 Hopefully by the middle of next week, they will all be in the enclosure happily munching through my milkweed plants!  My purpose in fostering them is two fold -- hopefully, I'm enabling more caterpillars to reach maturity and I'm fascinated by it!