Another Look at Meteor Shower

It's not often that I push all the way through a project from beginning to end but apparently having a quilting design idea was enough motivation to keep me moving on this piece! 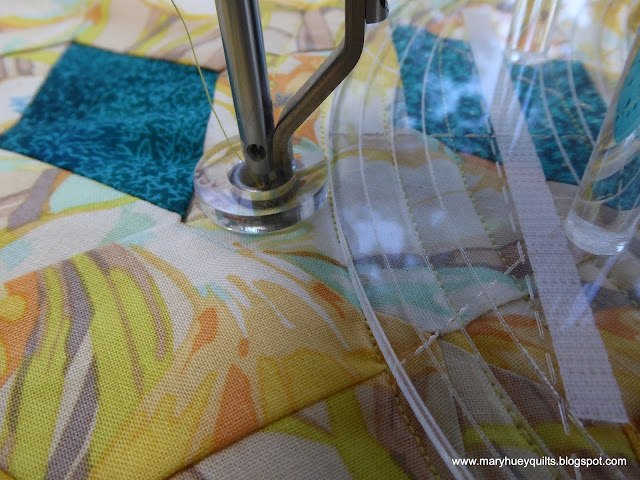 Sometime in the past couple years, I came across a quilt on Pinterest quilted in concentric circles like a huge target and it inspired me.  The swirling design of Meteor Shower called out for concentric circles as soon as I started the final stages of piecing! 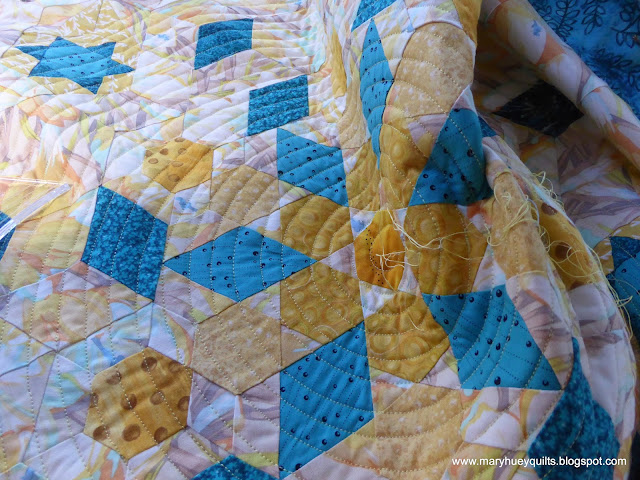 Eager to try it out, I fiddled with my set of Handi Gadgets Half Circles.
The first circle fit right inside the center hexagon! 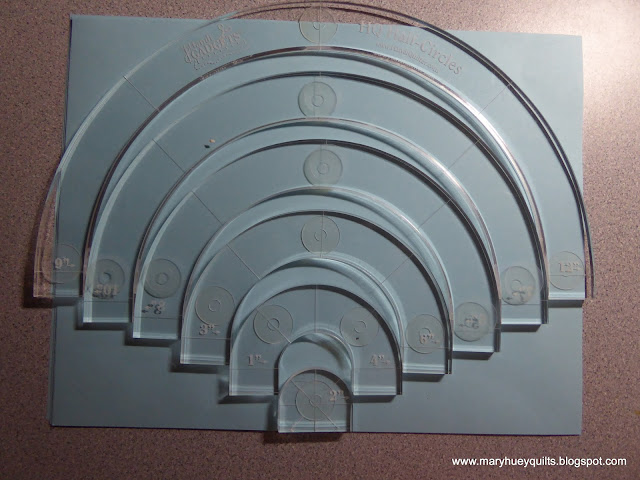 Once I had finished the 12" circle, it was obvious I would need a new strategy.
In the spring, I watched a gal demonstrate the Westalee Ruler Foot Echo Guides for Cindy's Sew Easy Shop here in Cleveland (Ohio) during a local show.  The tools are distributed in the USA by Sew Steady and HERE is a little video about the echo guides.  I was very impressed so I bought a set and hoped that my APQS ruler foot would work with them.  It didn't, but happily, APQS introduced a new ruler foot -- exactly 1/4" from the needle to the outer edge and with a new shank design (look back up at the first picture) that accommodates rulers all the way around the foot -- and the guides do fit on that foot!! 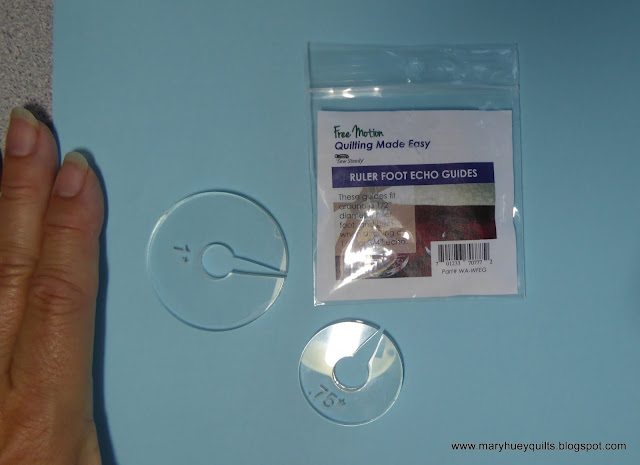 I experimented with drawing circles -- that didn't work.
So I used my Fine Line arc ruler to keep my stitching (fairly) steady and on track. 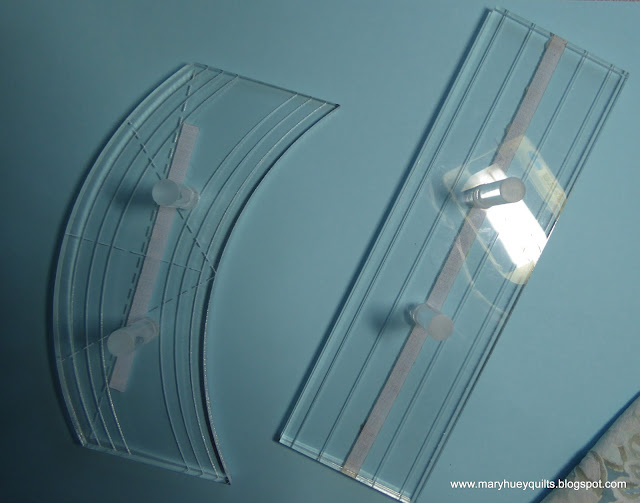 The key lies in stopping every 3" or so and adjusting the ruler to line up with the next section of the previous circle.  I'm not going to share close-up pictures of the stitching -- you'll see all the hic-cups. 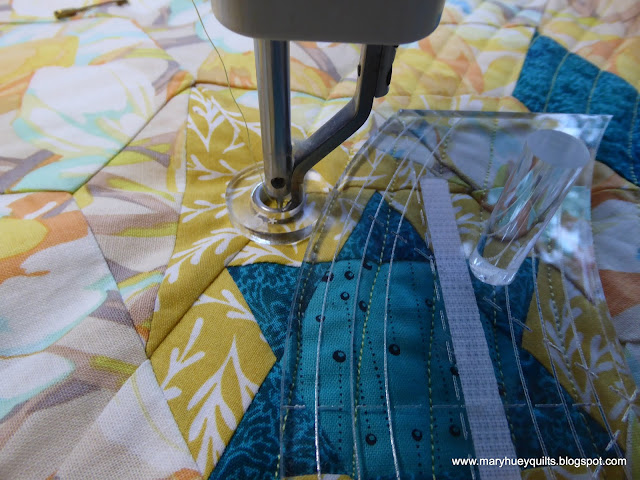 As I neared the point at which the ever larger circles would intersect the edges of the quilt, I decided to stop the circles once I was past the last group of teal diamonds and finish the corners with straight lines to create the appearance of a burst of light.
A sheet of paper laid on the quilt helped me experiment with how that might look and how to proceed with the stitching order. 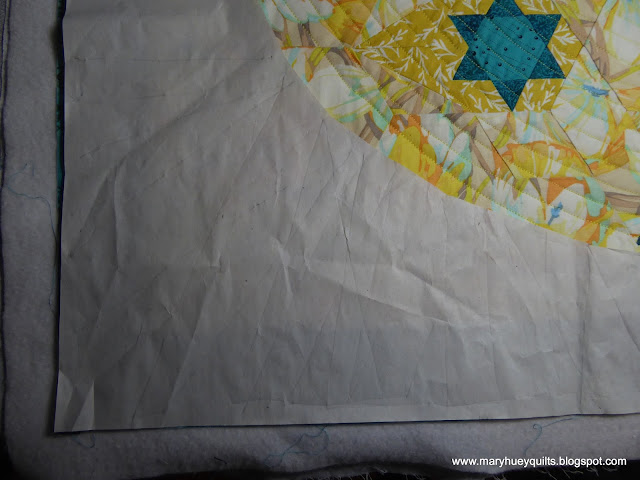 I switched to the straight ruler and zigzagged around the center creating a series of points. 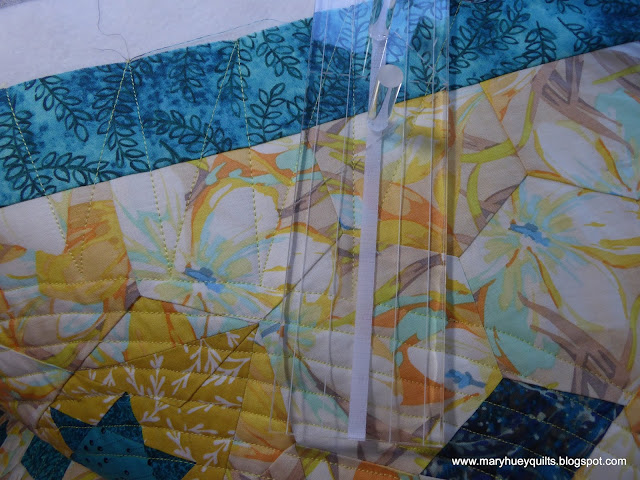 After the first complete pass around the quilt, it did not lay completely flat outside the circle.
I needed to add more quilting to match the density of the center of the quilt. 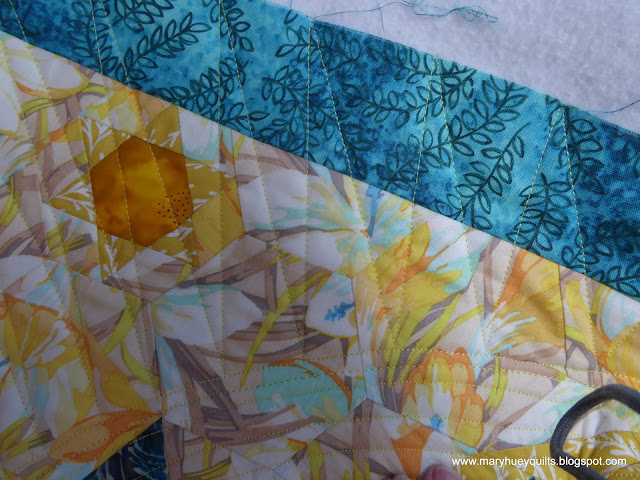 A second trip around the entire quilt with zigzags that overlapped the first round and were shorter took care of that.  As I was finishing the second round, I thought it would have added some more interest to have changed colors of thread and perhaps add a third row with a third thread color.
Next time?
Or you could do that and let me know how it looks! 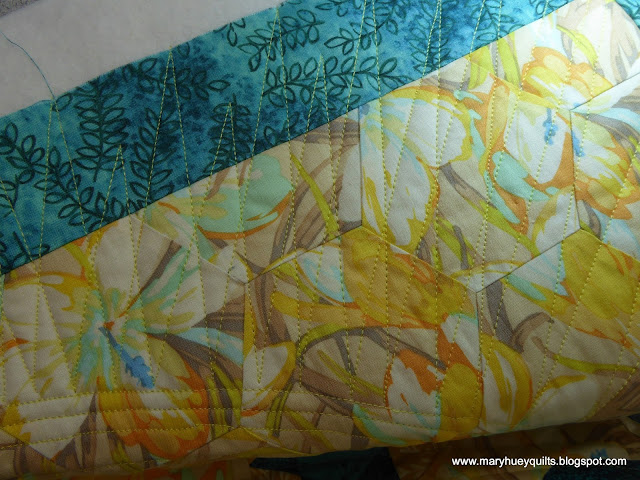 Here's a close-up of one corner so you can get a better idea of how it looks. 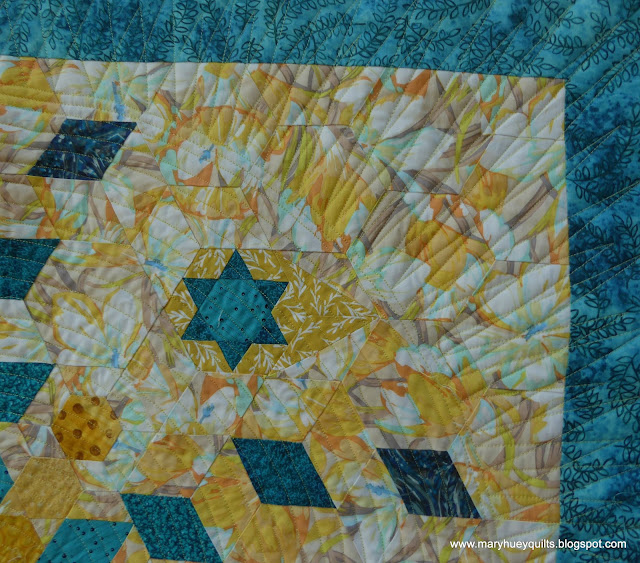 The edges were not quite as flat as I want for a wall hanging so I spread the quilt out and laid a soaking wet towel over top for a couple hours -- that flattened it out nicely.
It's laying out on the porch drying overnight -- thought I would get it bound today, too.
But there is no point rushing it -- it will be good and dry by morning and tomorrow, I'll have a FINISH!!! 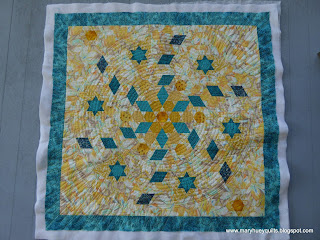 I love the movement the concentric circles create!
I'm not sure I would do a big quilt with this design and I think most quilters who do circles use a walking foot and a guide, but George doesn't walk, he only runs!!

If you missed leaving a comment on my last post to enter my Adventures In Hexagons giveaways,  keep going down the page and read Tuesday's post.
Winners will be picked on Saturday evening, 8/5/2017.