I added two more blocks to the Morris Hexathon line-up this weekend between watering and weeding.  This isn't one of the parts of the world that is experiencing too much rain.  Our average rainfall is 4" during June but this year, my primitive rain guage tells me we've had less than 3/4".
Not good at the beginning of the Ohio growing season.
#8 and #9 use just one template and for my smaller size blocks, that was H53 from Marti Michell's Template Set H for 1 1/2" and 3" hexagons.  If you are making the 4" blocks as directed in Barbara Brackman's instructions (HERE), then the 2" diamond from Set G will work -- no need to enlarge the patterns. 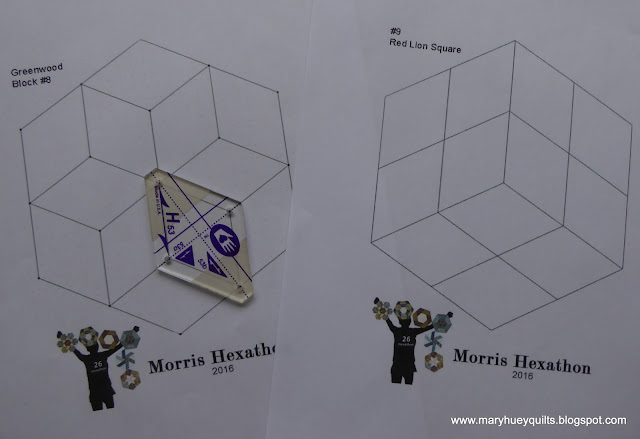 I had the idea I wanted to fussy cut three of the diamonds for the Greenwood block #8, but when I unfolded this piece of fabric, I discovered there weren't three repeats of any one motif. 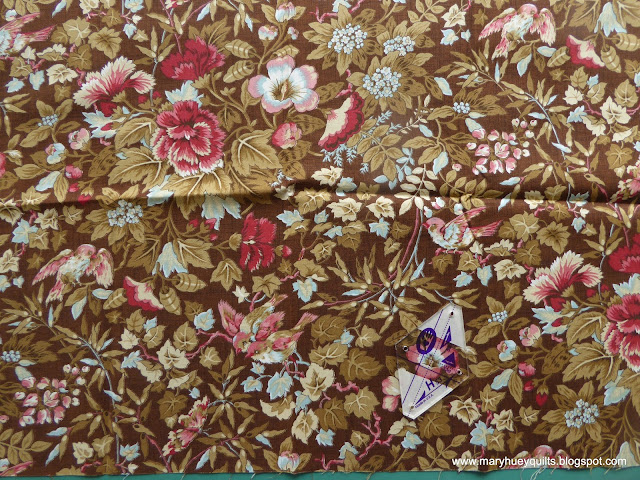 Since I was cutting on the front porch and was loath to return to the studio to find a new fabric combination, I made do with what was at hand and cut three different motifs.
Lazy, yes!
But a good strategy to use in a pinch. 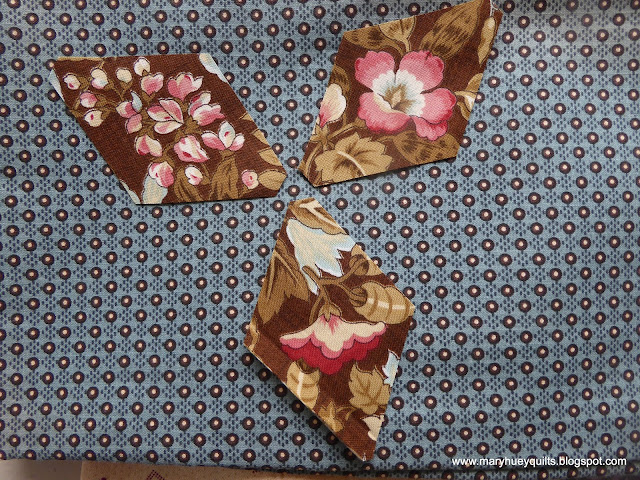 To cut the blue diamonds, I used the "centering" lines on the template -- the dashed lines are the center of the piece and the solid lines enable you to use the template to cut half diamonds. 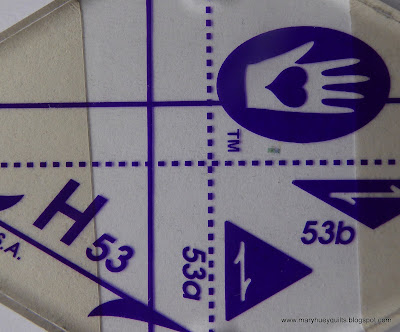 By aligning the dashed lines on the dots of the print, I maintained visual balance.  Sometimes I feel like a fussy quilter when I exert this sort of control, but I find these subtle visual imbalances disturbing so I control them as often as I can. 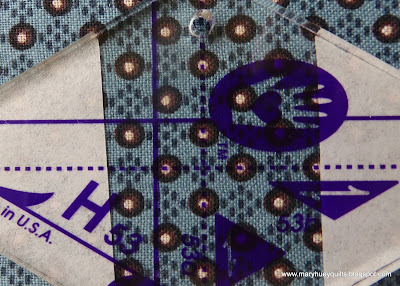 In the end, I recut one of the diamonds - to my eye, the upper left diamond (in the photo above) "stuck out" so I chose another single flower motif to blend in with the first two better. 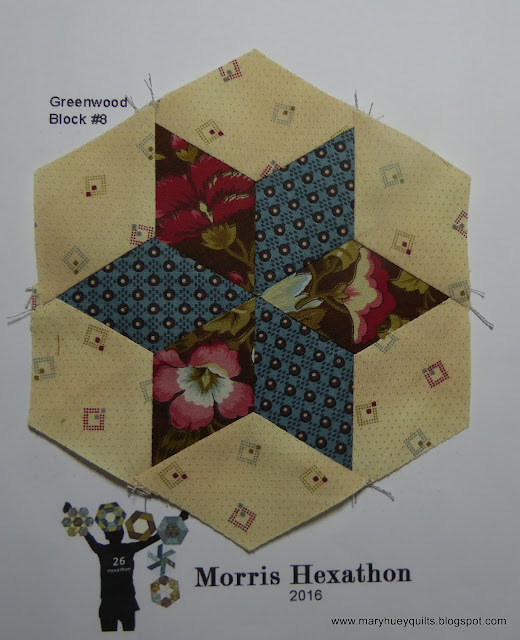 There is a border of perennials across the front of the porch and the purple coneflower is just coming into bloom -- a fritillary butterfly was dancing from flower to flower while I worked and then suddenly there were two sharing this flower!
I would have missed that if I was cutting in my studio!! 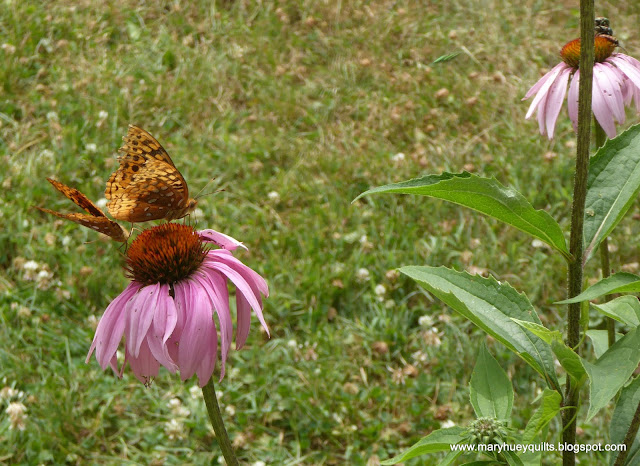 Barbara always shows several options for the color and value arrangement of the blocks which makes the posts interesting.  I was grateful for all the ideas and had to revisit #9, Red Lion Square, several times as I pulled fabrics.
This block illustrated the advantages of Marti's system of trimmed points -- no guess work needed to align the diamonds accurately!! 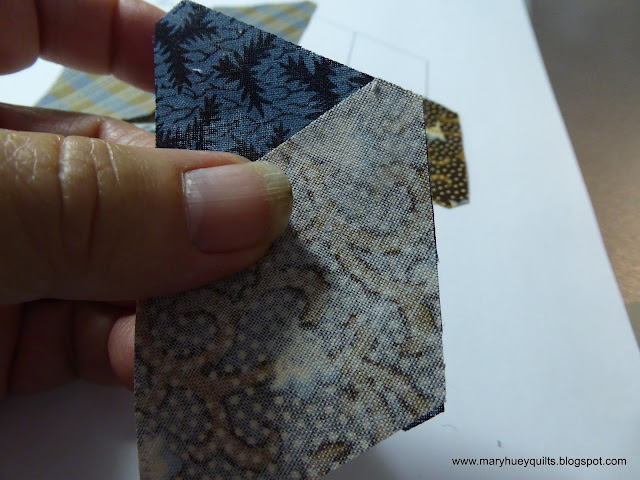 I started with four prints, but after several attempts to arrange them, I added two more and settled on this "tumbling blocks" arrangement of light, medium, dark. 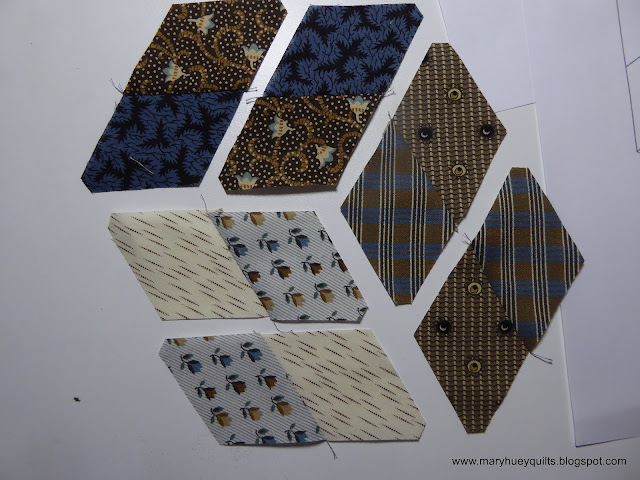 That way or this way? 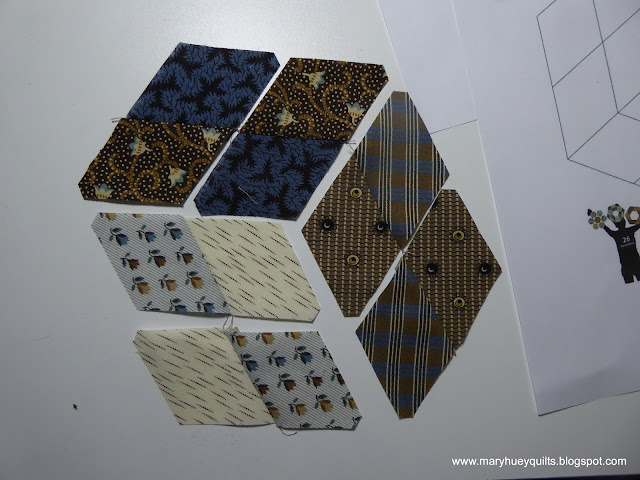 Once again, aligning the pieces is quick and accurate thanks to the trimmed points.  When I first started working with these templates 12 years ago, the trimming step aggravated me but once I realized how accurate my piecing became, I got over that!! 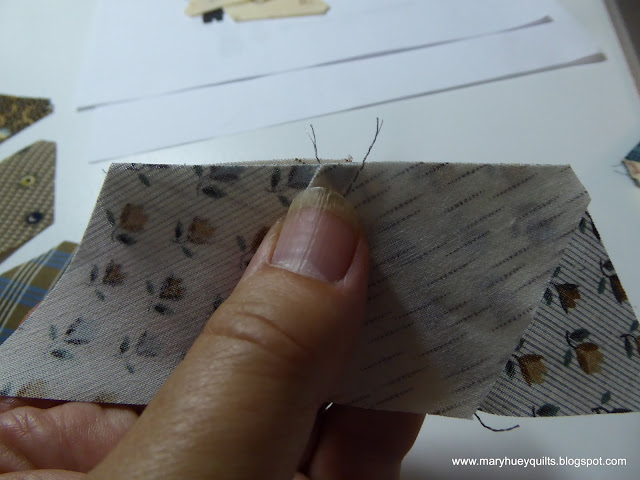 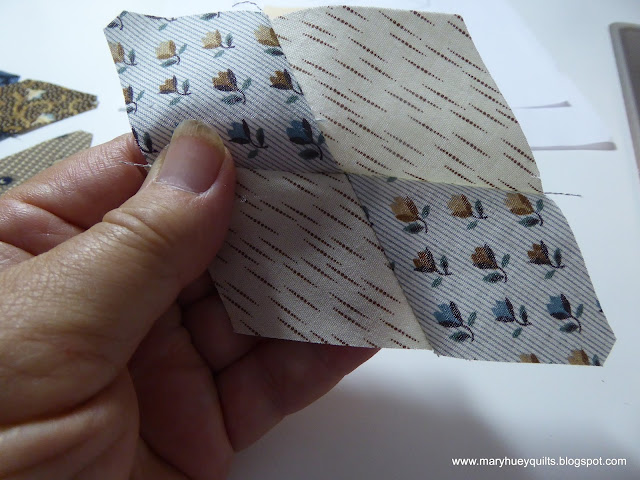 The only y-seams on this block were for the final assembly of the pieced diamonds. 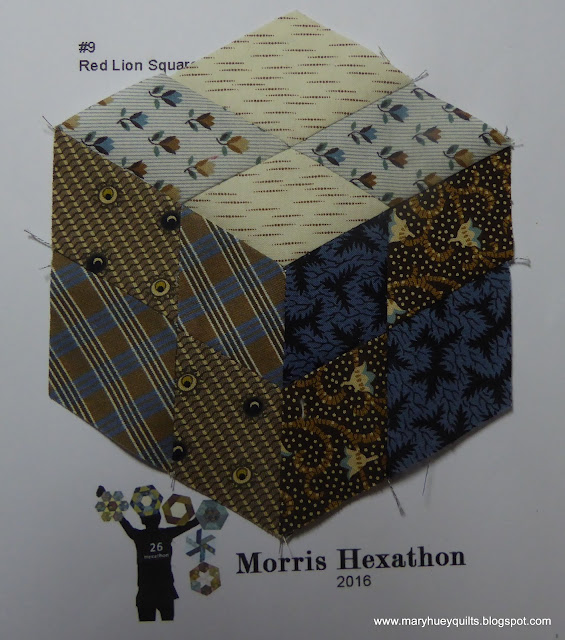 While I chained pieced through these two blocks, I made more "soap" bags for the garden using them as "sew-offs".  Slowly, I'm convincing some of you to try the "set-in piecing simplified" technique that is featured in my DVD and you are learning to embrace your y-seams!! 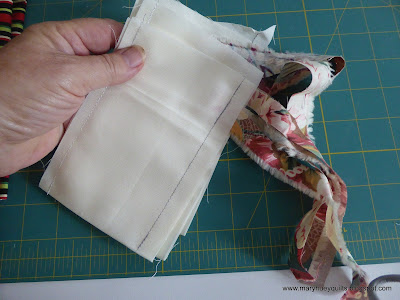 During my watering rounds, I discovered that the deer who has started to visit my garden too regularly had munched off most of the buds of the black-eye susan which are the foundation flower of my July garden.  I spent the evening planting "soap bags" in the hopes that he will leave the rest of them for me to enjoy. 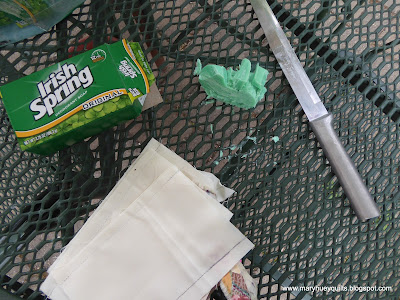 Back in the studio, I added the two new blocks to the row that is growing around my design wall.

This past week, I began to plan my workshop for the regional quilt show in 2017 at Lake Farmpark in Kirtland, Ohio.  It's going to be a two-day workshop devoted to playing with hexagonal block variations and settings for them.  I've requested the dates of March 17 & 18, so if you live near Northeast Ohio and would like to join me for this workshop, let me know and I'll keep you posted!
If you don't live near, I do travel within the region and this two-day workshop will be ready to present in 2017.  If I can drive to you and you can arrange lodging, I'm game!
Ohio, Indiana, Michigan, Pennsylvania, New York, Kentucky, West Virginia.
Traditional quilters or modern quilters -- you'll all benefit from learning the easiest most accurate way to piece y-seams!
Mary Huey