(2/24/2017 -- I've had so many questions about whether there is a pattern for this quilt and the answer is "no".  The block pattern is from someone else and the "original" part is my setting.  So I have gone through the original post and italicized the sentences that explain how I organized the setting to help any who are interested in using my idea.)

Currently the International Ornithological Union recognizes 10,615 living species of birds worldwide.  That number fluctuates due to new discoveries, split and lumps.  But wait until they hear about the 36 previously unknown species that I hosted on my studio work wall this past weekend!!  LOL

These delightful blocks have been showing up here on my blog off and on since summer.  I collected them from my Stash Bee Hive 7 mates during the summer.  HERE is a link to the post I wrote to request the blocks (there's a link in that post to the Block Lotto post with the bird pattern).
I made a few myself and then another web friend and I traded a few blocks this winter.
Since I was anxious to work on this piece, I included it in my First Quarter goals list for the 2016 Finish-A-Long.

This weekend had three totally empty days -- the time had arrived to set the top together.

I asked everyone to "name" the birds they made -- that's what all the pieces of paper pinned to each block are. 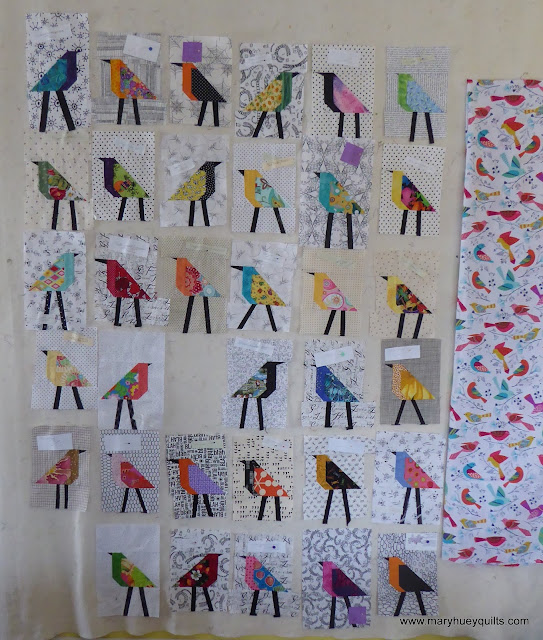 My first step was to square up all the blocks.  I stitched 2" wide background strips to the left or right side of each block. 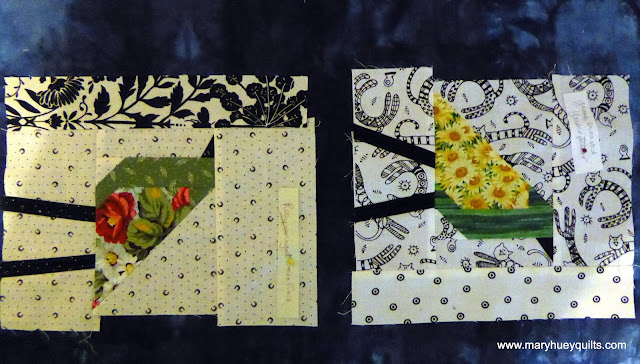 Then I trimmed and squared up the blocks -- the heights vary but the width of all the blocks is consistent. 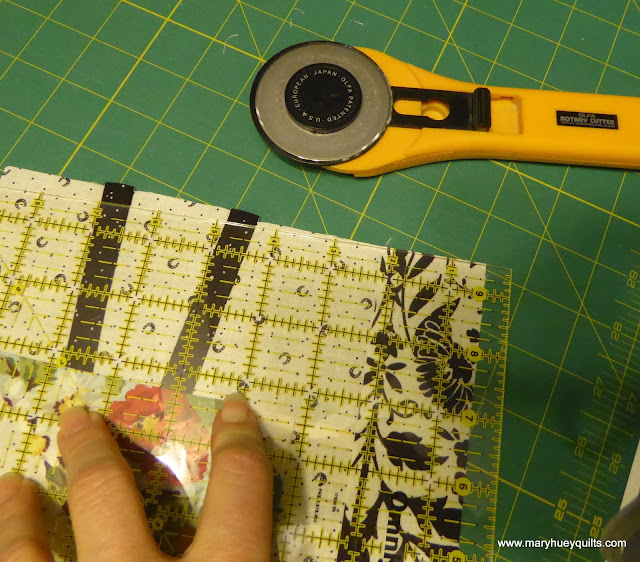 The next task was to "identify" all the species included in my collection.  I printed labels using a fabric prepared for printed with my inkjet printer. 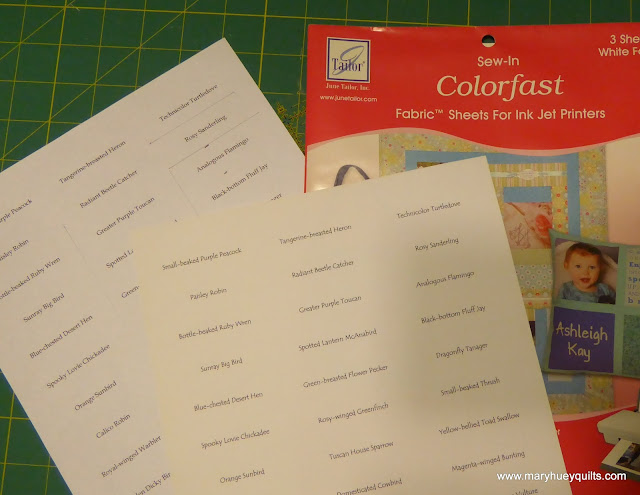 There was lots of stopping and starting as I moved through this project and one of the long pauses occurred while I figured out a simple and effective way to add the labels to the blocks.  I finally settled on fusible web which I fused to the back of the printed fabric before trimming the labels apart. 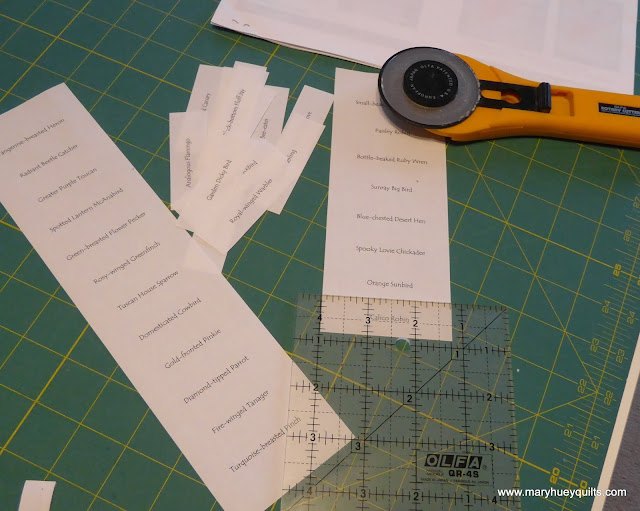 I experimented with hand stitching or machine stitching them in place and as you can see, I settled on the machine and used black embroidery thread. 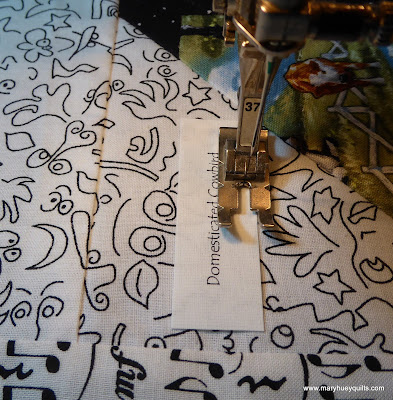 Here's a close-up of the newest species of cowbird, the domesticated cowbird.
They are easy to identify as long as you know cow breeds. 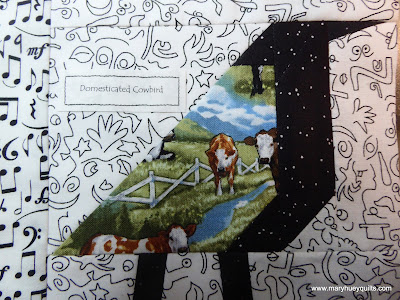 Once all the blocks were ready, it was time to make the setting decisions.  I found this yummy print last fall and thought it would complement the collection well. 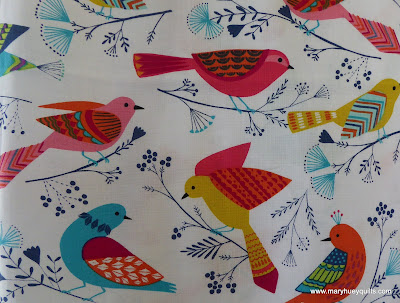 I also won a scrap bag of polka dot strips from Moda during the winter and loved the way they looked with the birds. 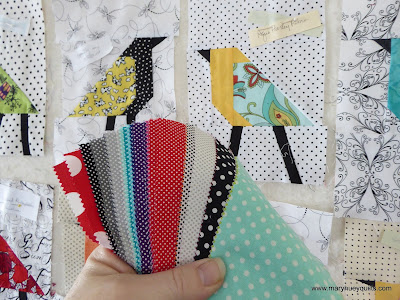 Here was my idea before I began working with the blocks. 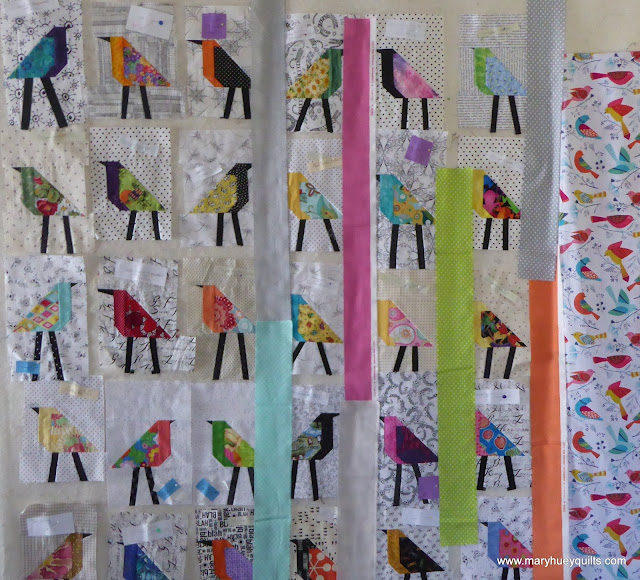 But as the auditioning progressed, I eliminated the warm colors and added grays, then the bird print was set aside for the backing of the quilt. 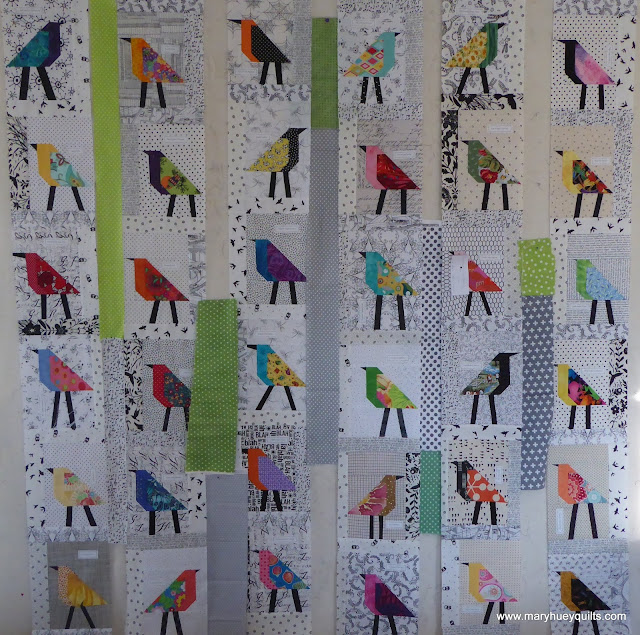 Upon returning to the studio after one break, I decide the quilt was getting too wide and pulled away the sashing completely.  I not only liked the shape of the quilt better, but it brought the emphasis back onto the birds.  I achieved the "staggered" positions by alternating which side of the bird had the extra background strip added.  Then I set the vertical rows together adding another strip of background fabric between all the birds.  Another stagger was added by leaving that horizontal background strip off the top of the odd rows and off the bottom of the even rows.
Finally I tried to spread the birds facing right around the quilt -- there were only 7 of them -- although I think one of them jumped out of the third row into the top row when I was snacking!?! 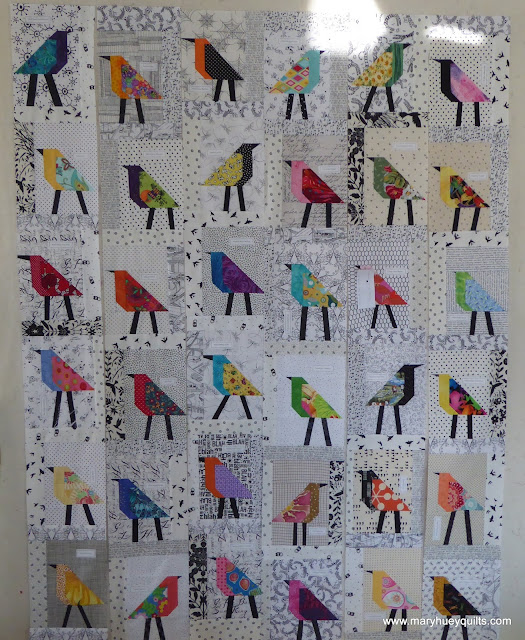 There was another series of auditions for the borders but I won't drag you through that.  In the end, I decided on a narrow line of black polka dot before adding a wider border of assorted gray polka dots. 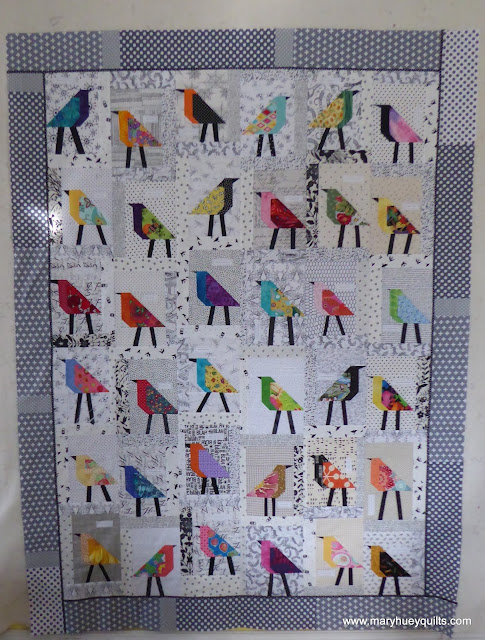 All that remains to be done is to make the backing and layer it up for quilting.  There will be a significant pause as I ponder that aspect of this quilt. 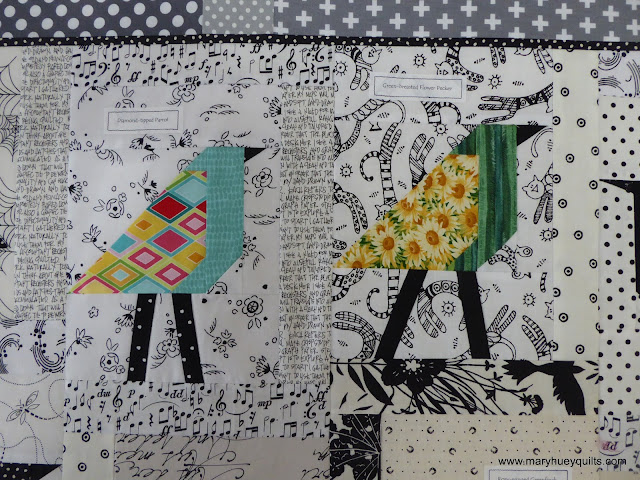 I also have to contact the IOU and find out how to submit my discoveries.
I'm sure they have no idea any of these species exist. 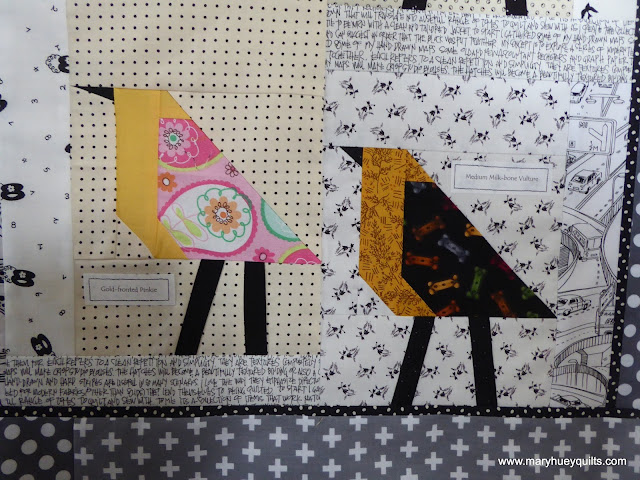 I probably should also figure out how to manage the onslaught of "twitchers" that will want to see these new species for themselves.