I should go back and see how many times I've had finishing this quilt on my goal list.  Finally, I'm right on the edge of success.  I layered it up at the end of November and have been slowly moving through the quilting process. 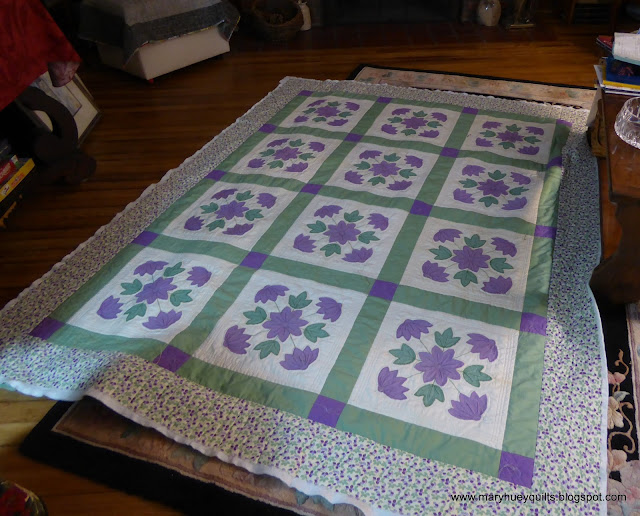 I began with almost no plan for the quilting so I ditch quilted all the sashing and blocks hoping that was enough engagement with the process to kick start some clever quilting ideas.
The blocks are around 80 years old -- they were started by a lifelong friend of mine when she was in her teens.  She in turn gave me the blocks to finish when I was in high school.

I asked myself how it would have been quilted in the 1930's when it was started?
The best answer to that question is "simple" and probably by outlining the appliques and using a grid  for the background.

Since I don't feel my skill is good enough to outline the applique right at the edge, I echoed the shapes instead.
A grid would have meant so much stop and start work so I experimented with this inner frame of three lines 1/4" apart.  It was easy to do with a straight ruler and my ruler foot. 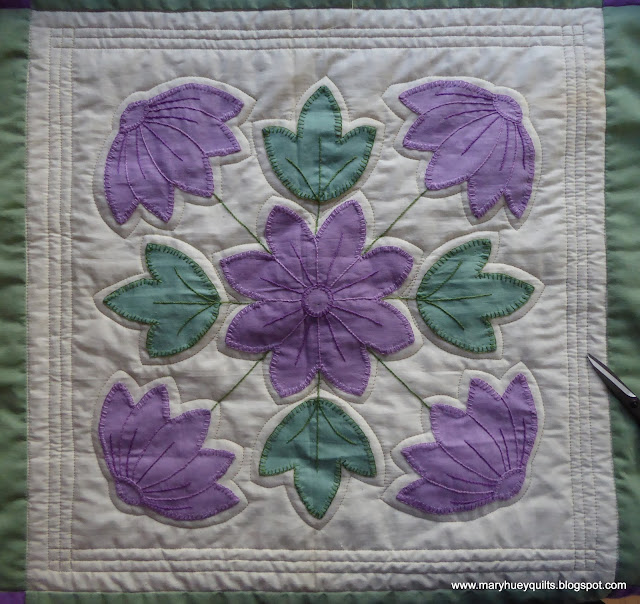 I also echoed the shapes 1/4" inside the appliques -- I'm really pleased with the impact it has on the flowers! 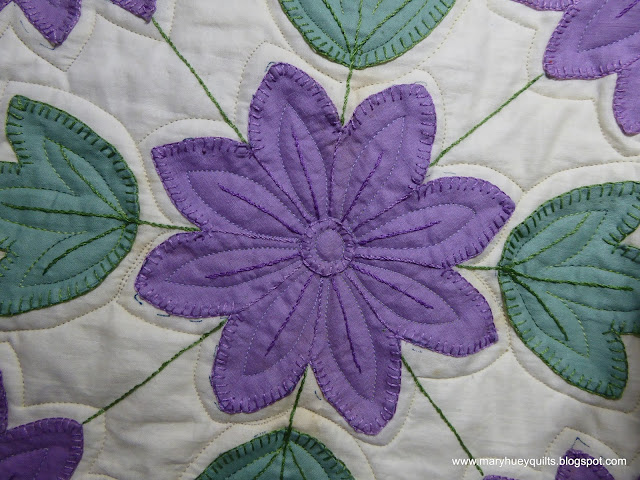 A simple 4-petal flower in the cornerstones repeated the shapes of the flowers and leaves and was easy to stitch. 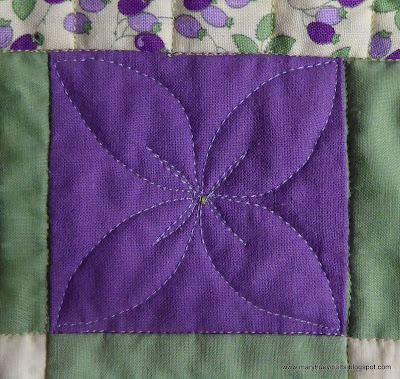 I was pleasantly surprised at how well a spool of standard Mettler cotton thread worked on my machine -- meant not having to leave the house on a hunting foray for thread! 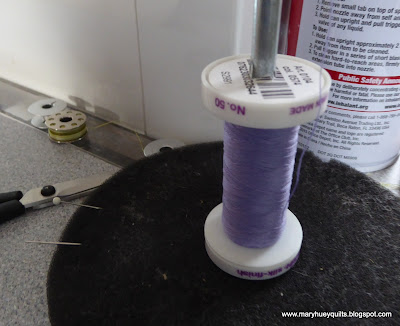 Up to that point, the ideas came steadily and the stitching progressed!
But then it was time to quilt the sashing.
I drew on it with my chalk wheel. 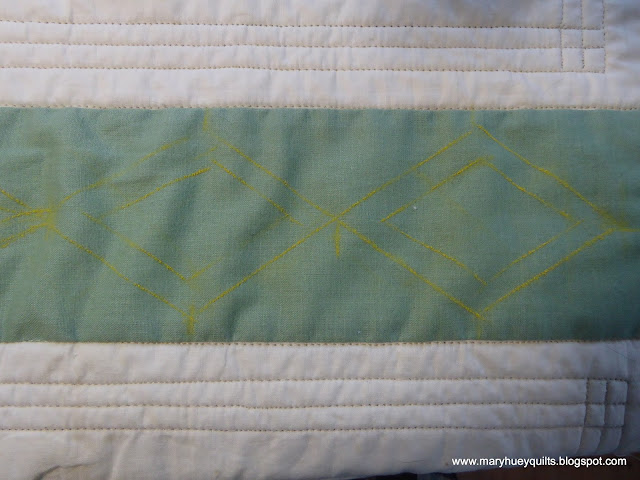 I drew on paper.
I pulled out quilting stencils and books of designs
I made a mock-up and experimented with different designs.
Nothing! 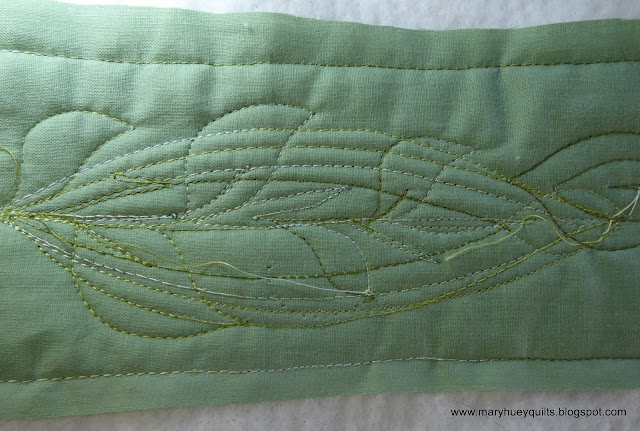 So I quit experimenting and jumped to the borders -- simple lines 1" apart perpendicular to the edge of the quilt -- no picture because it doesn't show up enough.

I came back to the sashing and decided to just start by stitching a box 1/2" inside of each rectangle.
As I did the first box and pondered how to fill it in, two chance events the day before resulted in an idea!!
On Instagram, a gal shared her experiments with quilting a repeating design inside boxes which she had drawn on her fabric.  Later the same day, I had a conversation with a friend about using "dots" to mark alignment points to use with quilting rulers.
When the idea came, it seemed very quick but there had been a week or more of contemplation and experimentation which probably had to precede the final result. 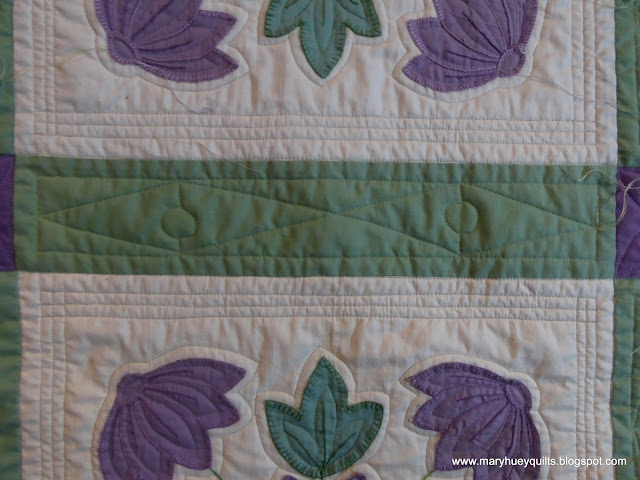 The two diamonds came first and are the result of dividing the space into quarters. 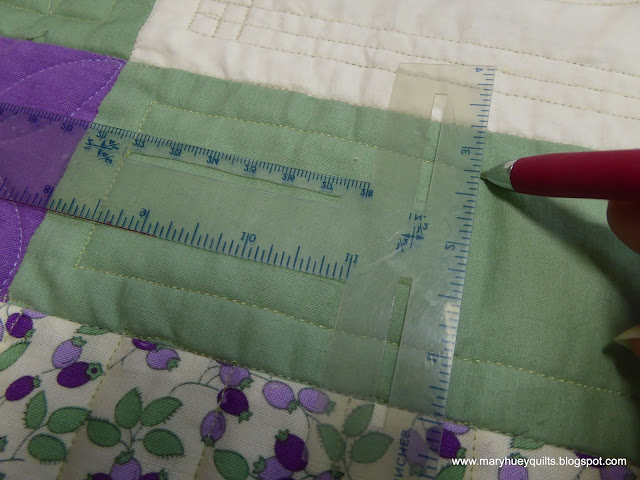 Marks along the edges were used to align the quilting ruler. 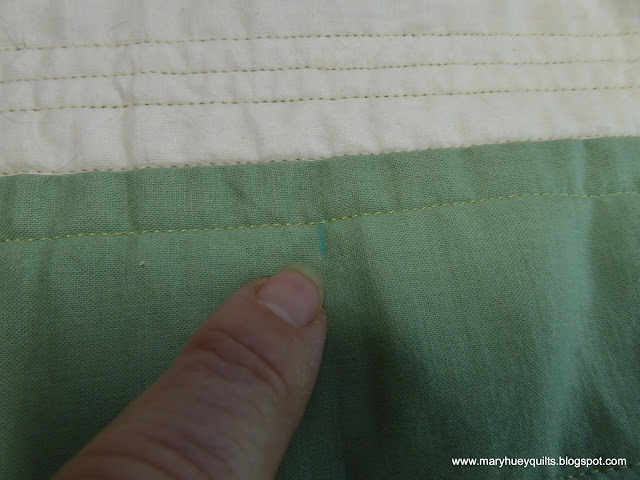 I realized that by starting at the center of the end of the sashing, that would set me up to start the diamonds without breaking the thread.  I hope I can remember that strategy in the future! 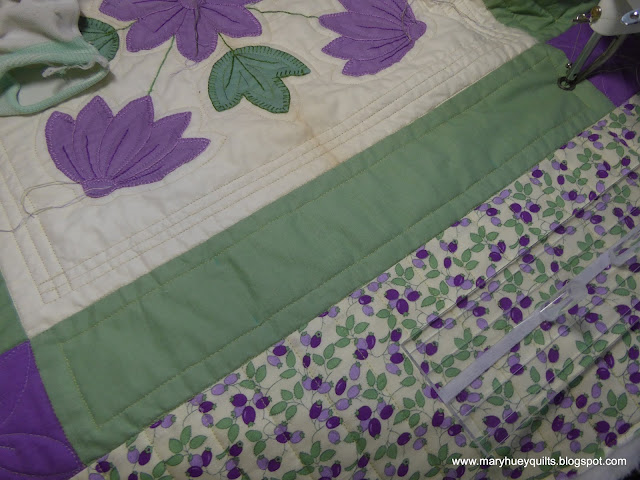 Here's my ruler in place for the longest line as I zigzagged across the center of the sashing. 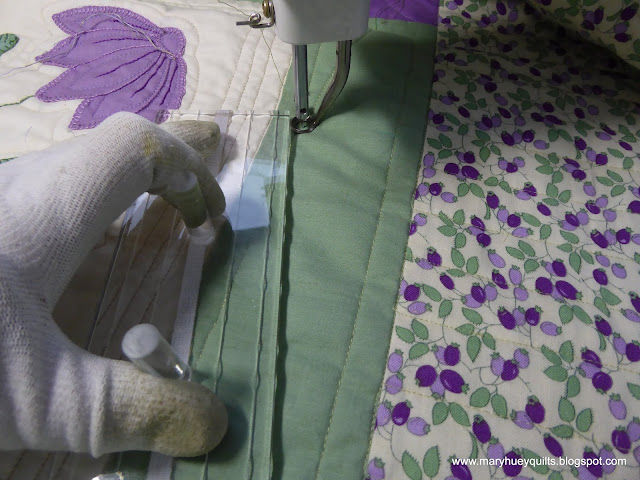 On the way back up the sashing, I finished the diamonds. 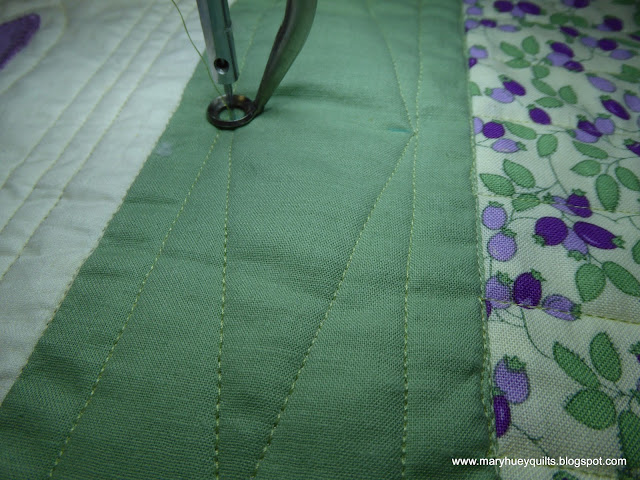 and added the floating (and very organic) circles, one half circle at a time -- 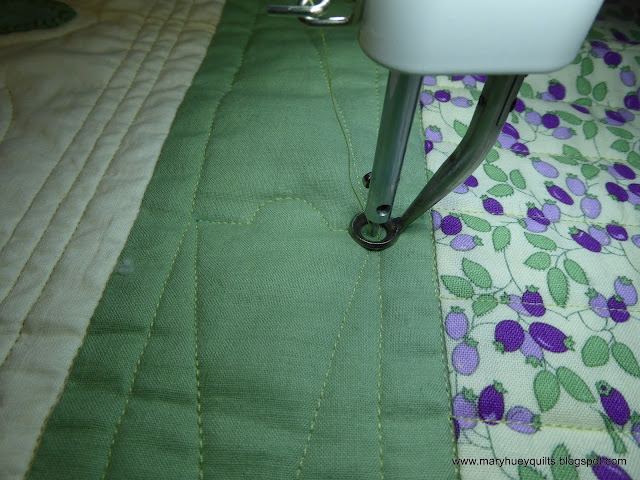 over to the opposite point and back, retracing the lines connecting to the diamonds and finishing the circle.  The first circles were an after thought since the diamonds looked empty, clunky. 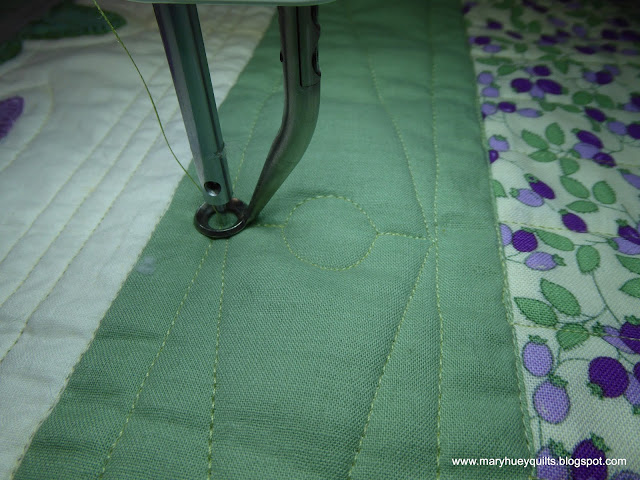 The entire design was stitched continuously with the help of dots to guide my ruler placement.
Each motif is taking about 8 minutes to complete including the time to mark it. 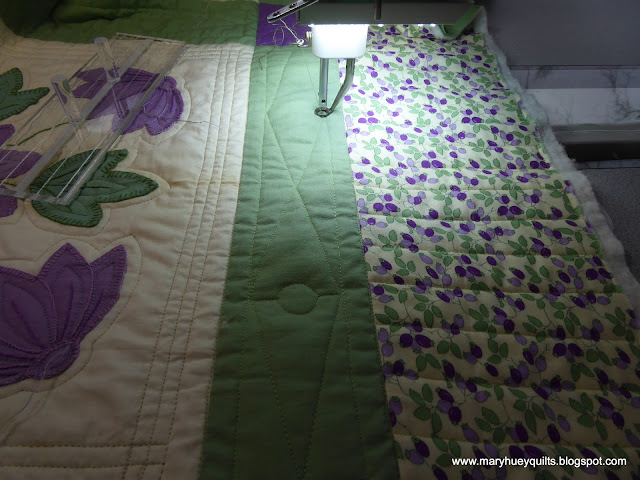 I'm very pleased with the impact of the sashing design on the overall quilt -- it has an art deco look that I think fits perfectly with the design.  There are only a dozen sashing units left to quilt and then I'll be ready to bind and cross another UFO off the lists.  Hooray!! 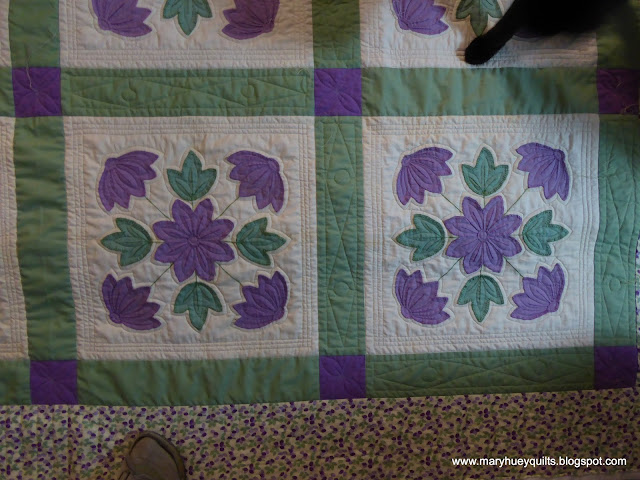 Update -- 12/27/2016
It's completely finished -- I took this picture just before putting it into the washing machine.
I took it along for the Christmas weekend in Pennsylvania and finished stitching the binding and tying off all the quilting threads (I hope). 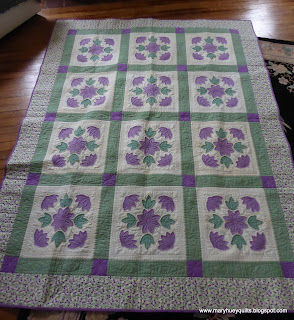 Later this week, I'll deliver it to it's new home!!
My fourth finish for the fourth quarter 2016 Finish Along goals!!
I think I'm going to finish all the pieces on this quarter's list HERE!!