There it is, my fifth finish for the fourth quarter of the 2016 Finish Along!!
It's also my final finish for the year.
This evening it will be covering my lap when I settle in for an evening of murder mystery and knitting. 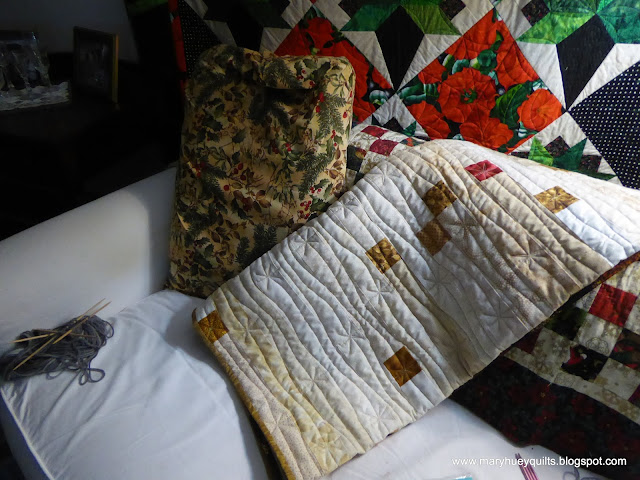 I pieced this quilt which I call Cardinals in the Snow during my annual piecing retreat in January 2015.  You can visit the original post HERE.  At the end of that post, I mentioned that I might unstitch the center seam and make two lap size quilts rather than one generous twin size.
That's exactly what I did so I was able to share half with someone and keep half for myself.

Earlier this fall I spent an evening layering up both of them. 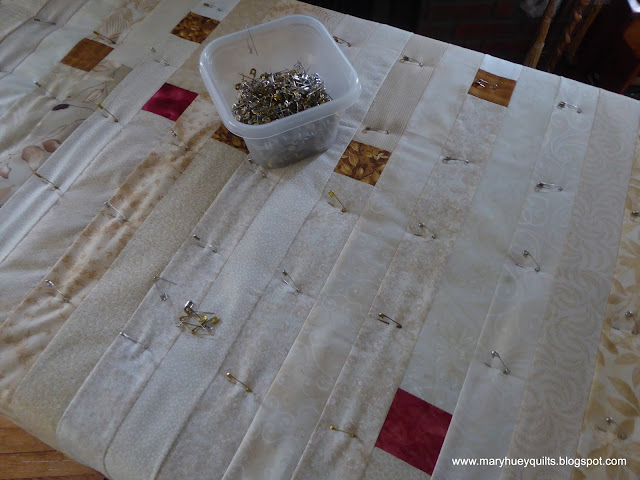 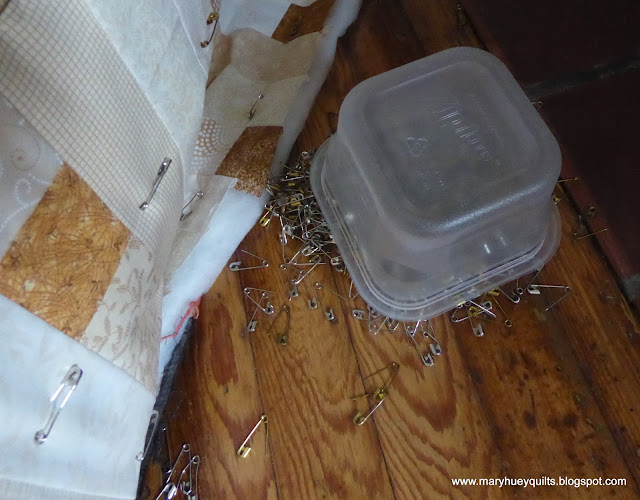 The first one was quilted quickly in November and two weeks ago, it went to a young person whose family is in transition with the help of Cleveland's City Mission. 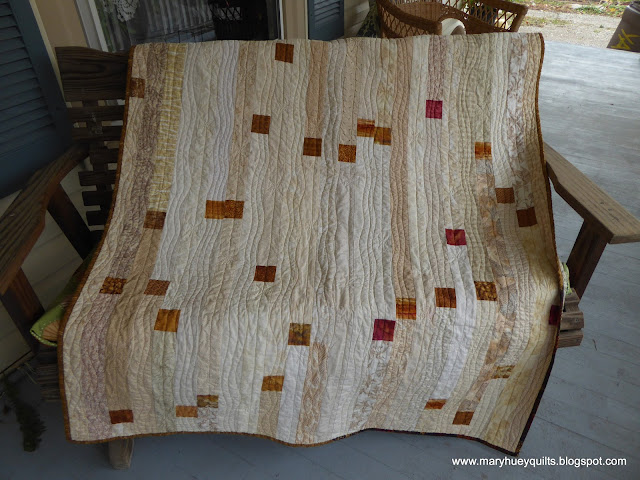 I wanted to evoke the feeling of falling snow with the quilting, so rambled from top to bottom with vertical lines of stitching.  I alternated a straight(ish) line interrupted with "snowflakes" with three rambling lines.  The quilting went quickly which was good since our delivery deadline was impending, but I wasn't completely satisfied with the result.
Keeping such long lines straight is not easy for me. 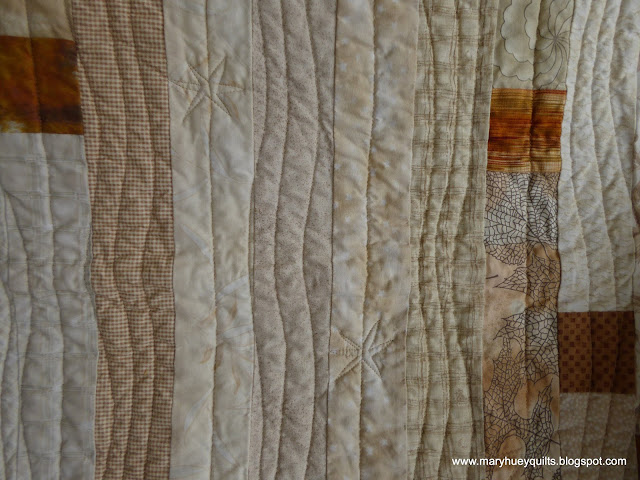 I decided to use all rambling lines on the second one.
Happily, I chanced onto one of Lori Kennedy of The Inbox Jaunt's tutorials on Pinterest!
You can check it out HERE.  I incorporated her snowflake stitching process and the idea of staggering their placement into my rambling lines.  I started in the center strip of the quilt and set up the first snowflakes at approximately 12" intervals. 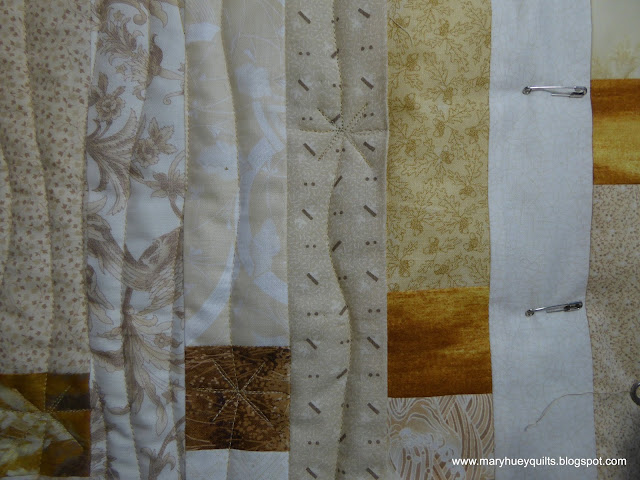 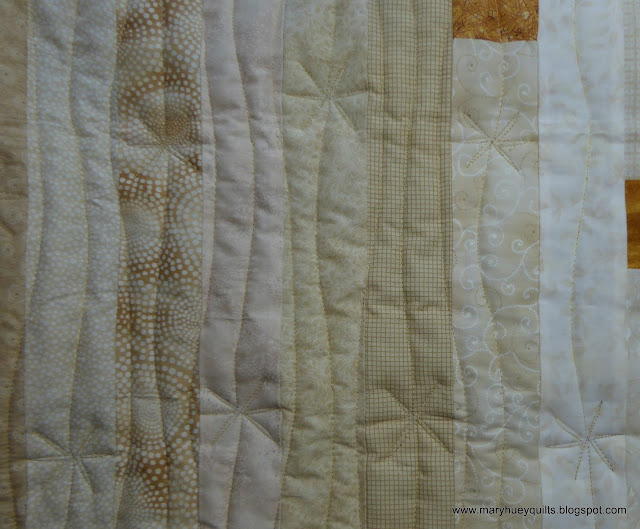 On my practice piece, I inserted two "plain" rambling rows of stitching but that didn't seem to work as well on the quilt.  In this picture I have just stitched the snowflake line down the center of a strip. 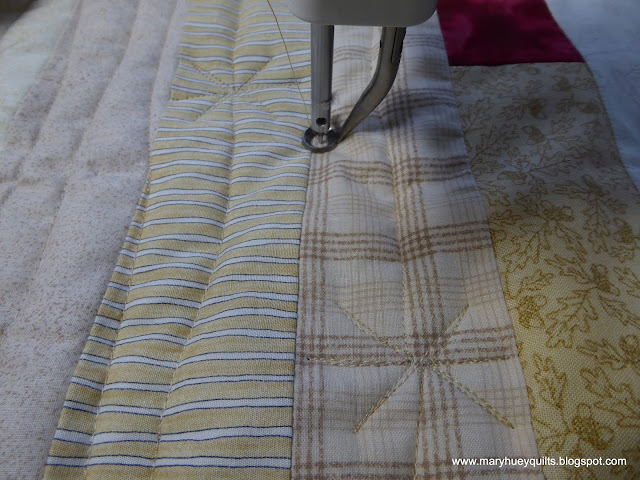 I've been quilting at a steady pace each day and today it was ready to trim and bind.  This afternoon was dreary so I turned on all the lights in the studio, made a pot of tea, chopped up the last of the fruitcake and pushed through the binding process while listening to Levison Wood's book, Walking the Nile on Hoopla.
I enjoy a good walking adventure, but Wood's is over the top -- and bonus, he's a good writer! 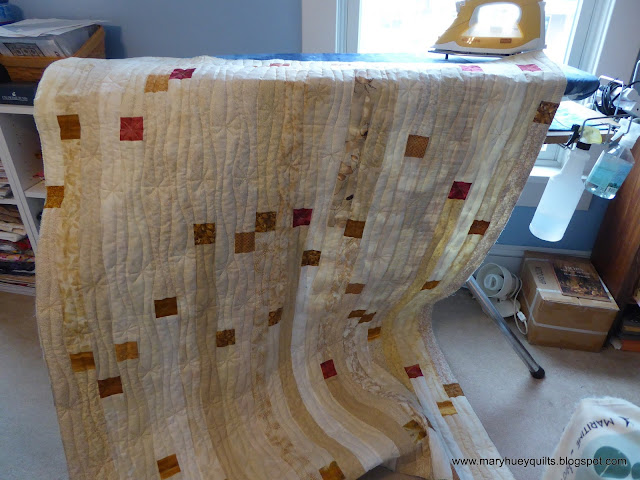 I backed the quilt with one of my favorite "I can't cut it up" fabrics!! 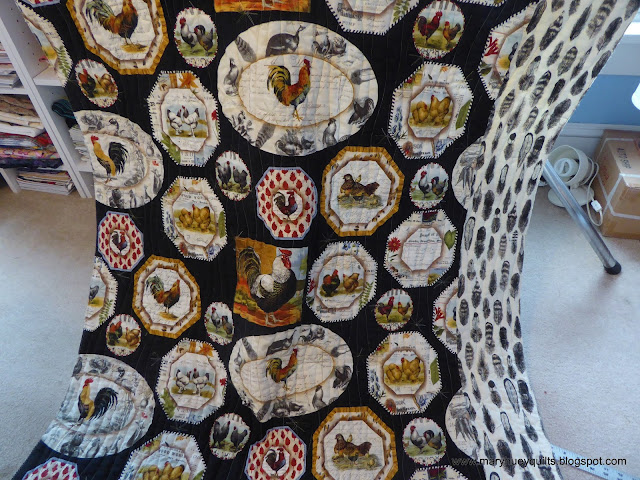 It's a great accomplishment to finish all five of the projects I put on my fourth quarter list!  HERE is the original list!  Now it's time to reflect on my finishes during 2016 and set my sights on more finishes in 2017.  As I do that I find I have a new sense of personal realism about the quilting part of making a quilt  as a result of all the machine quilting I've done this year.

I'm ready to admit I'm primarily a utilitarian quilter who quilts my tops because they are more useful finished and I'm not fussy enough to do best of show work.  It's a very freeing acknowledgement and the energy it's bringing to my work is terrific.