I've decided to set this group of three stars into a table runner and I think they look more interesting with the points touching rather than the flat sides touching.  There are large triangular voids and they could be filled in with a large triangle.  If one choses that route, the fabric needs to be an interesting one, possibly something that can be fussy cut.  The other option would be to use a very simple print or solid with the idea that the quilting would stand out more. 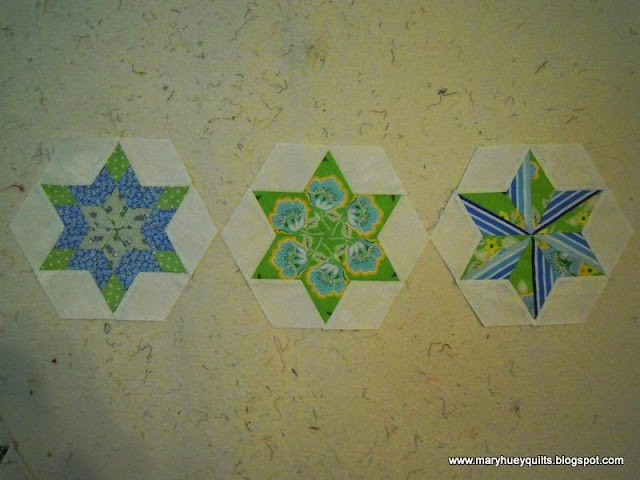 I have decided to use a group of four smaller triangles that will create a unit large enough to fill the space.  If you are working with Set G or Set H, it's the equilateral triangle that is half of the diamond template you used for the stars. 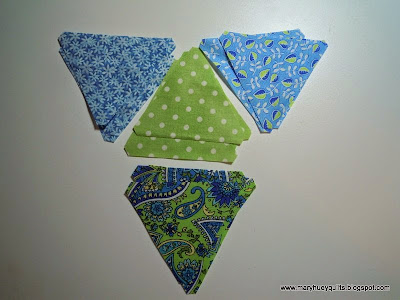 Since I'm working with a small assortment of prints, I've chosen four and each unit will be arranged identically.  It's easy sewing -- all straight seams.  The only mistake you can make is to sew the wrong two sides together because there are three choices, but only one right one.  So start carefully and be sure you chain piece correctly -- there is nothing more frustrating that an entire chain of "wrongs". 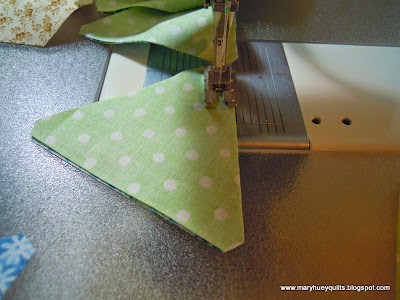 This is how they will be placed with the stars and I have separated them into three construction segments in order that all these seams will be straight -- no set-ins. 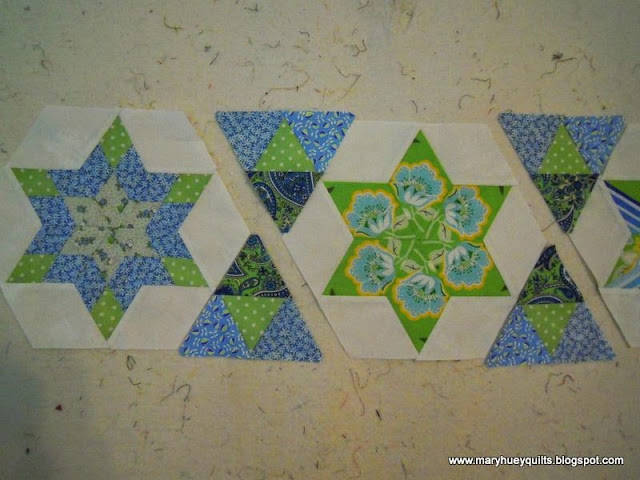 Before I stitch them together, lets look at a couple other arrangements that can be used for a quilt with several rows of stars.  In the one below, I've staggered the stars.  The "void" is the same and I can use the same large single triangles or units of four smaller ones.  If I used a larger fabric assortment, I'd make the units of four "scrappy".  I could also have experimented with rotating the orientation of the darkest point so it was the farthest from the center star to achieve a second larger star around a center star block -- can you see that?  I didn't see it on the work wall -- just saw it in this photo.  I do like how crisp and defined this setting makes each star look. 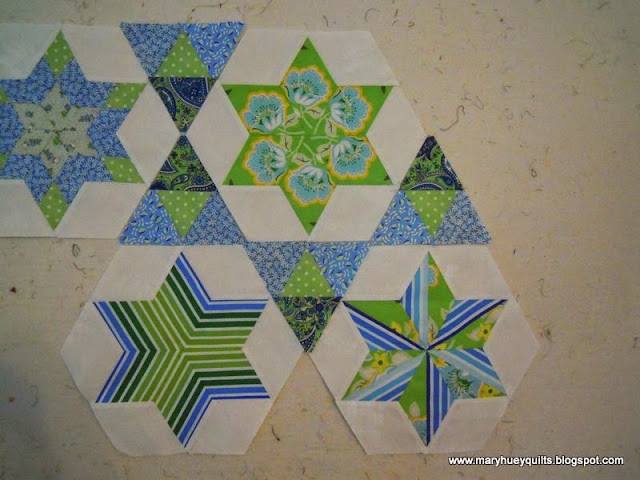 If I stack the stars as in the photo below, the "void" is a large diamond but to keep the straight seams during the setting process, I would still work with equilateral triangle units.  You do need to be careful when joining the points of the adjacent stars -- go slow as there is lots of bulk at those points.  I have more success when I press away from the points (towards the background diamonds). 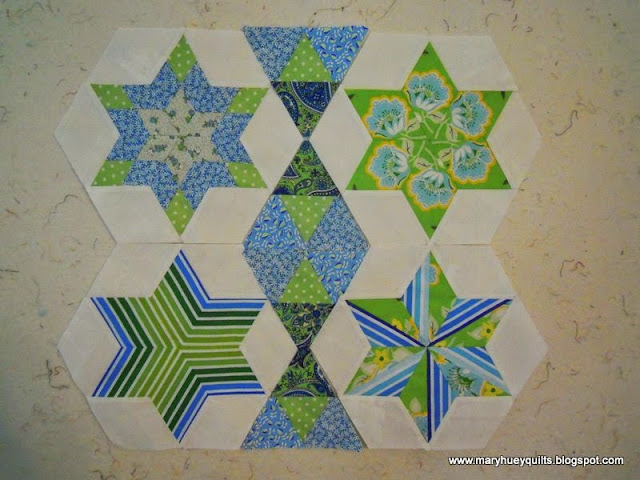 This is the setting I used for my first diamond star sampler.  Because of the variety of star backgrounds and the scrappy triangles used in the setting units, I liked stacking the stars in this one. 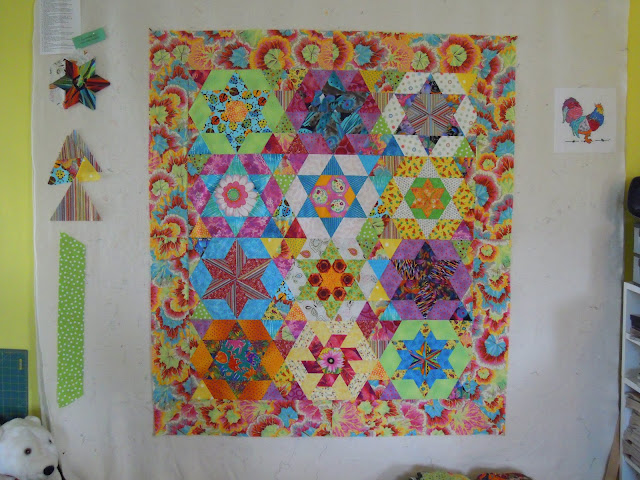 A smaller star could also be used to fill that diamond shaped void.  It's made with the smaller diamond template in the set you are using and adding an equilateral triangle that matches the large diamond in your set to finish it into a diamond unit the right size.  You will however need to set these blocks together with set-in seams -- no long straight seams here.  I do think it would make for an interesting setting though. 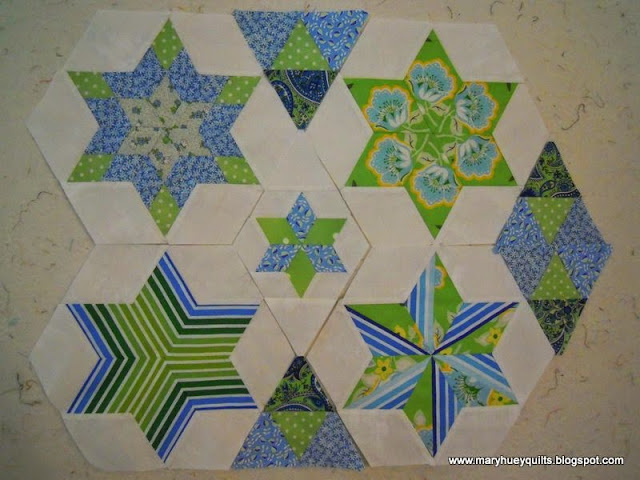 As I was setting the table runner together, I laid an end unit (look back at the fourth picture) down wrong.  I took this picture before fixing it because it made me think that might be a fun center for a cluster of star blocks -- to have those triangle units all facing to the center.  I'm not going to explore that idea now but want to recall it later and the  photo will help. 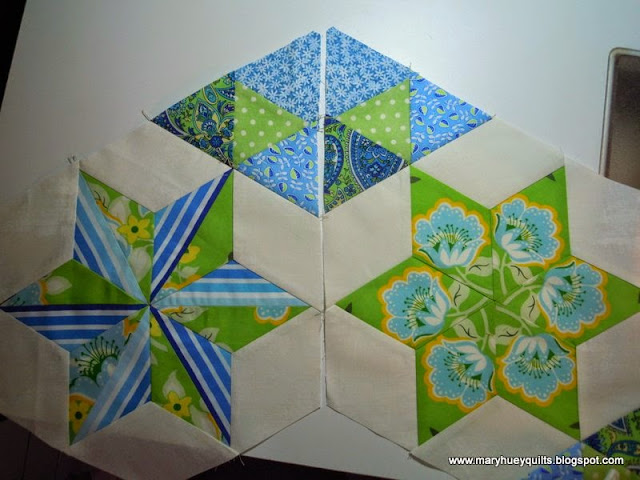 I hope you are pleased with your progress so far!