How is your pile of stars growing?  I hope by now you have six to eight stars completed because it's time to put them up on your "work wall" and begin to make decisions about the direction your quilt is headed before doing more piecing.  You are going to become a designer!

There are two basic setting options for hexagonal blocks.

The first group are "straight" settings where the star blocks only touch partially and there are open spaces that need to be filled in as you finish the top.  And I've been able to identify three variations -- there might be more.

In the first one, the stars are stacked with the upper and lower edges touching.  On the right and left sides only the corners touch and there is a diamond shaped space to fill in. 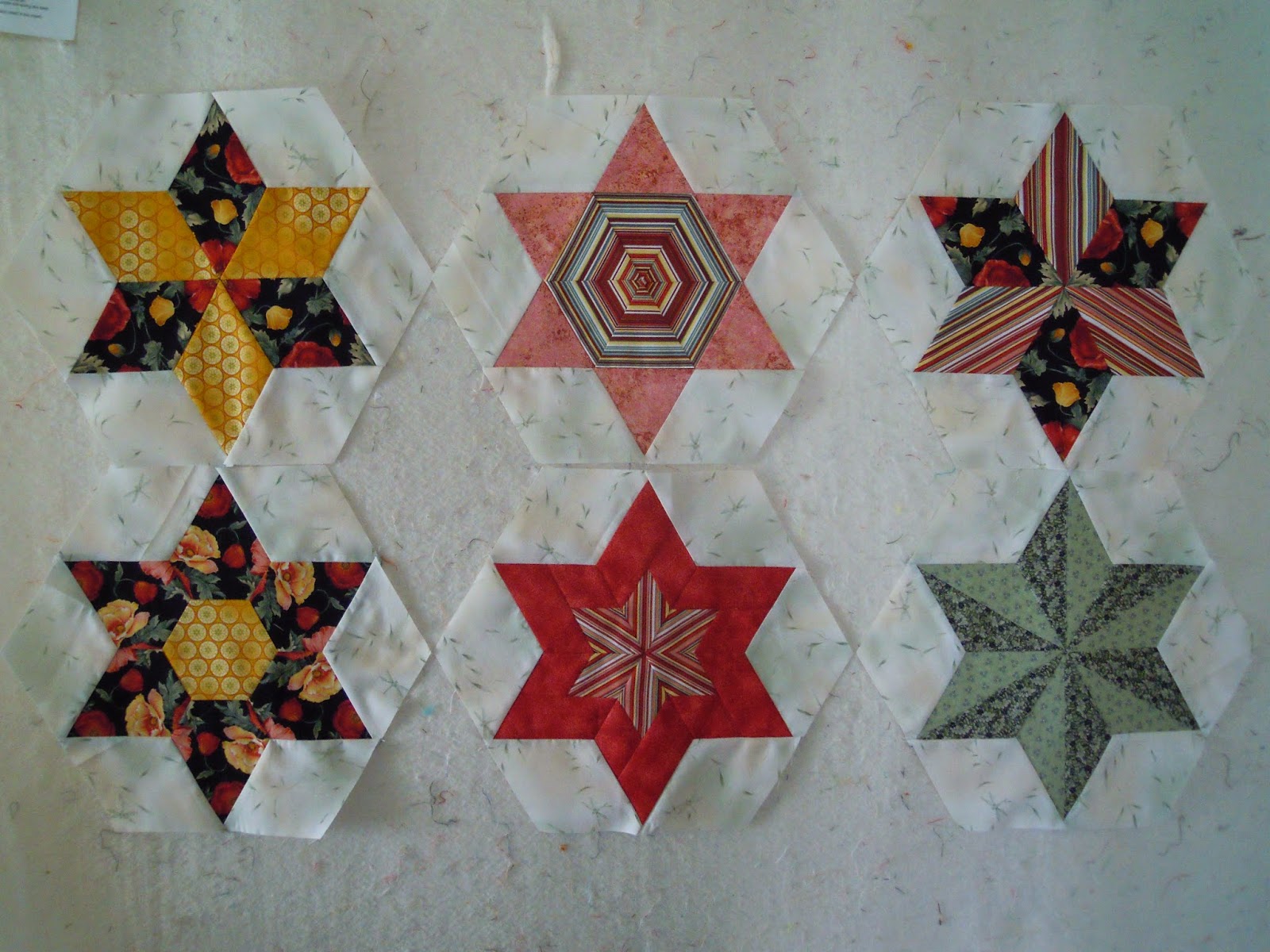 In the second variation, the stars are oriented the same except that each row shifts to one side so the stars aren't stacked -- they are staggered.  There is still a space to be filled but now it is an equilateral triangle. 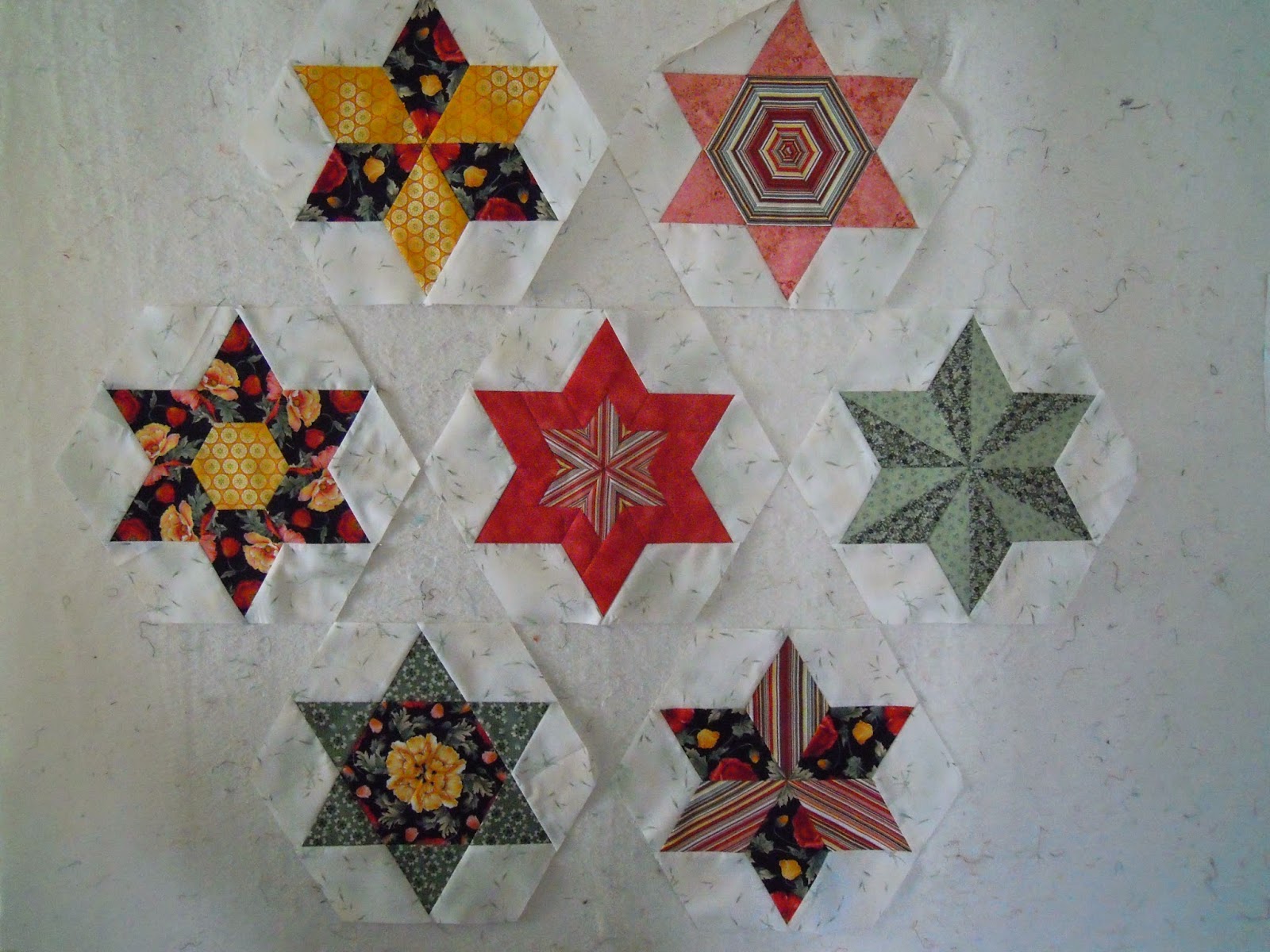 In the third variation, the stars are twisted so that instead of sitting on a flat side, they sit on a point.  The space that needs filled is a diamond but it lays horizontally rather than vertically.  As I look at this, we could also stagger this setting by shifting the center row up or down -- can you see that? 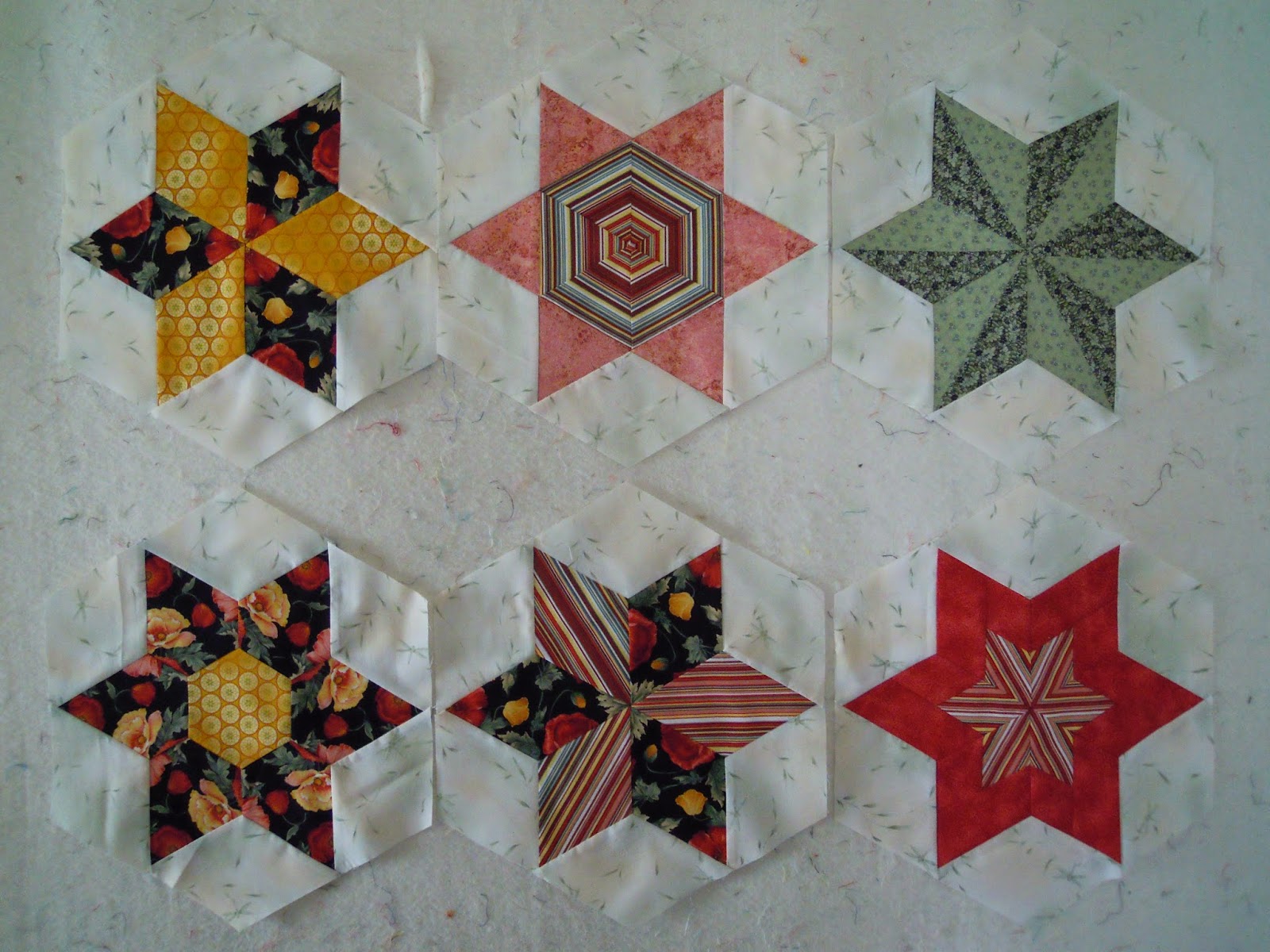 And notice how different the stars look in the two orientations above -- that's one of the decisions you need to make -- which orientation do you prefer?

The other basic setting is a "honeycomb".  The hexagonal blocks are set edge-to-edge and staggered so there is no space between the blocks.  Each of the variations below represent a different orientation of the stars.  Can you see the difference?  Which do you prefer? 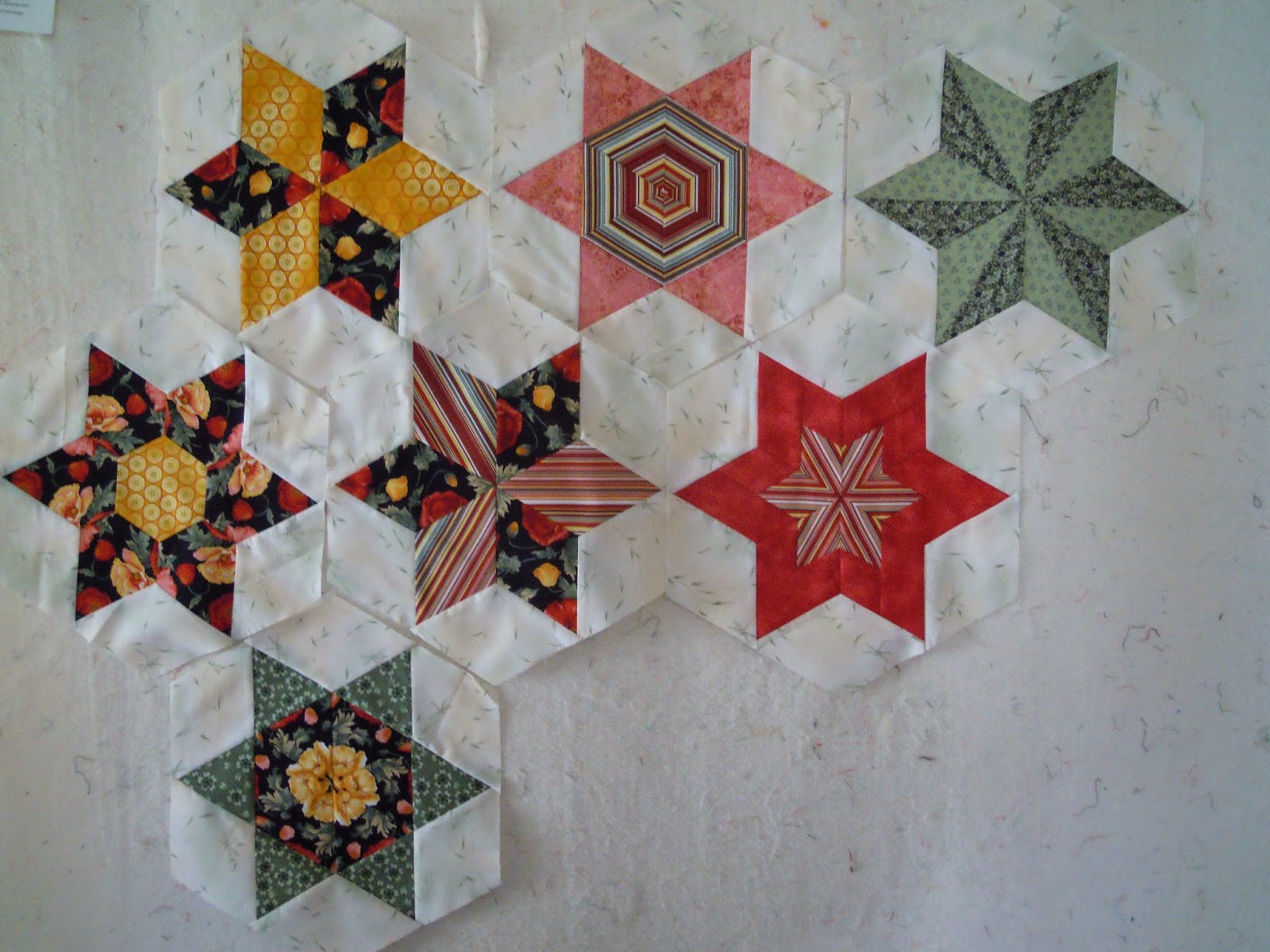 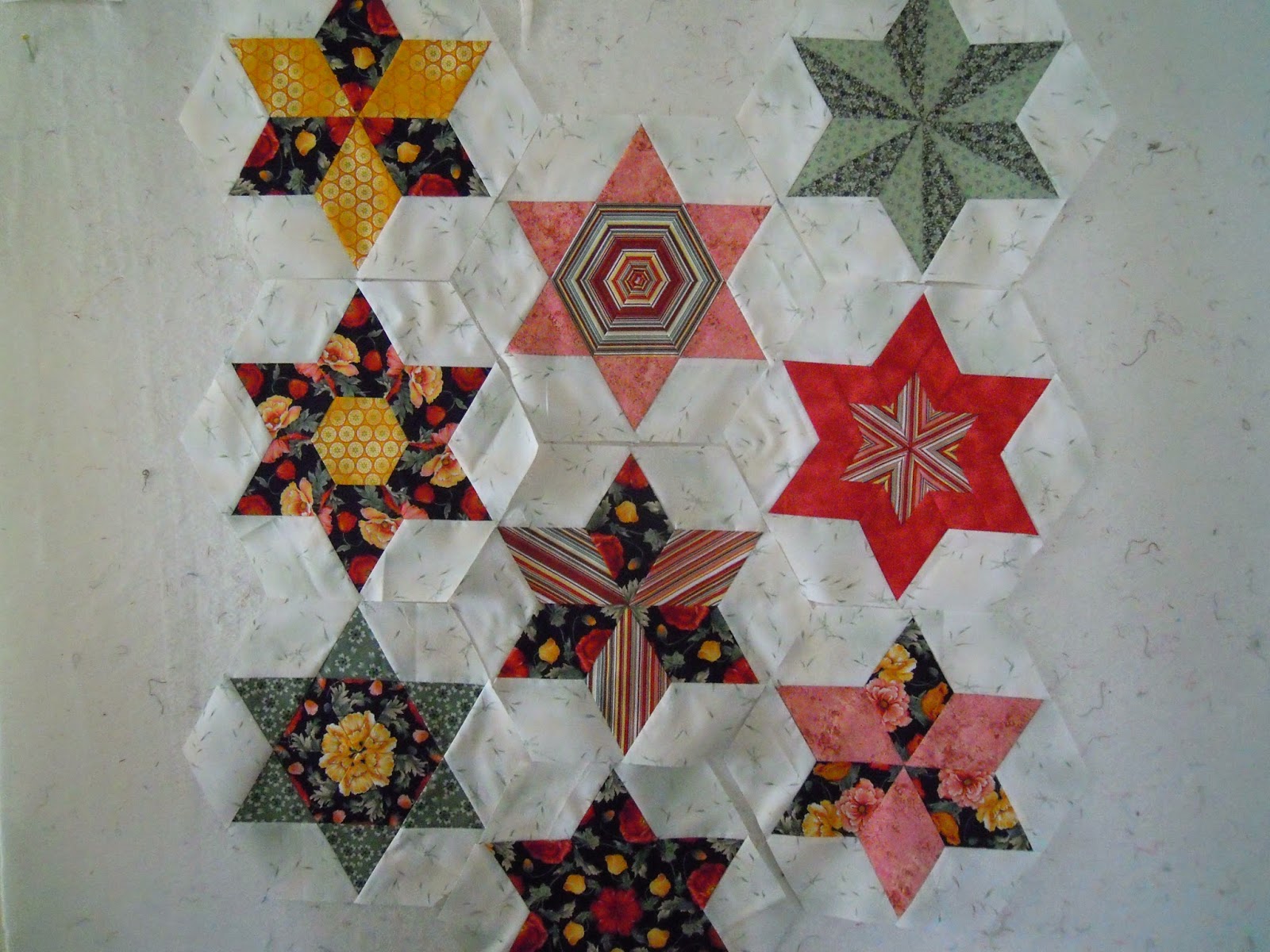 Once you've chosen your preference for your blocks, we'll begin to discuss how to construct the fill-ins units needed and the fill-ins for the edges so they will be straight.

While you have your stars on the work wall, evaluate the colors you've used thus far.  I tend to keep repeating similar combinations so at this point I feel I need more green.  It's a gut feeling but since it's my feeling, I'm going with it!!  I plan to make at least two more blocks so I'll be able to accomplish that.  The mostly red/orange star really stands out, doesn't it?  It will be a natural focal point so I need to manage it's placement in the quilt top to control the focal point.  I'll move it around on the work wall until I'm happy with it's position. 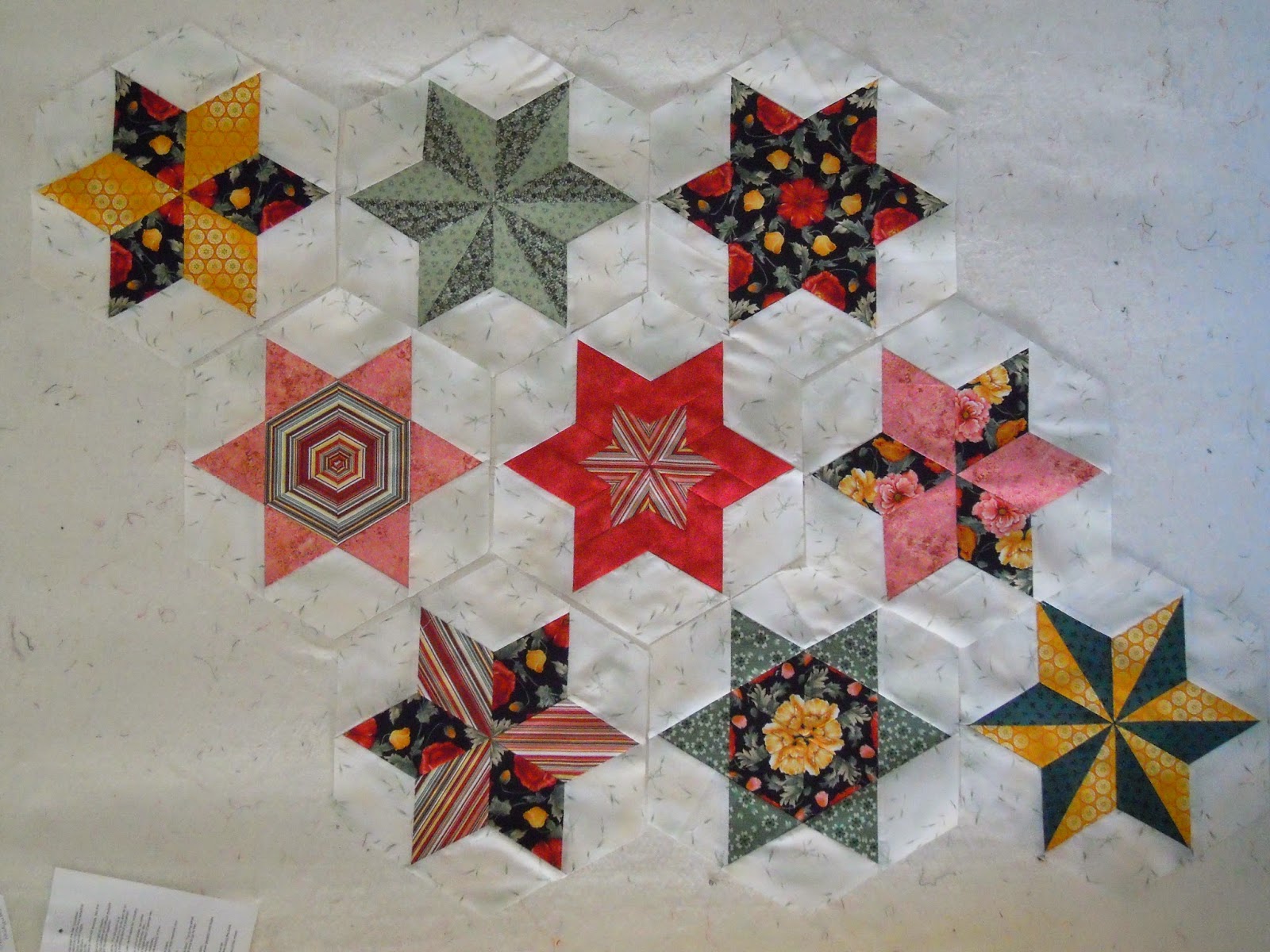 I really like the clean look of this group of stars so I'm leaning towards one of the honeycomb settings.  This color arrangement feels more balanced and I think that will be important to help maintain the clean look.  Notice that the stars with the gold print are opposite each other.  That loud red one is in the center.  If this is my final arrangement, I'll need two more stars for the upper right and lower left corners and they will need to complement one another.

That's why I want you to get your stars up on the work wall.   If you leave them up for the coming week and look at them several times a day, the ideas will coalesce -- change what you don't like, emphasize what you do like.  Do you need to make a few more stars? 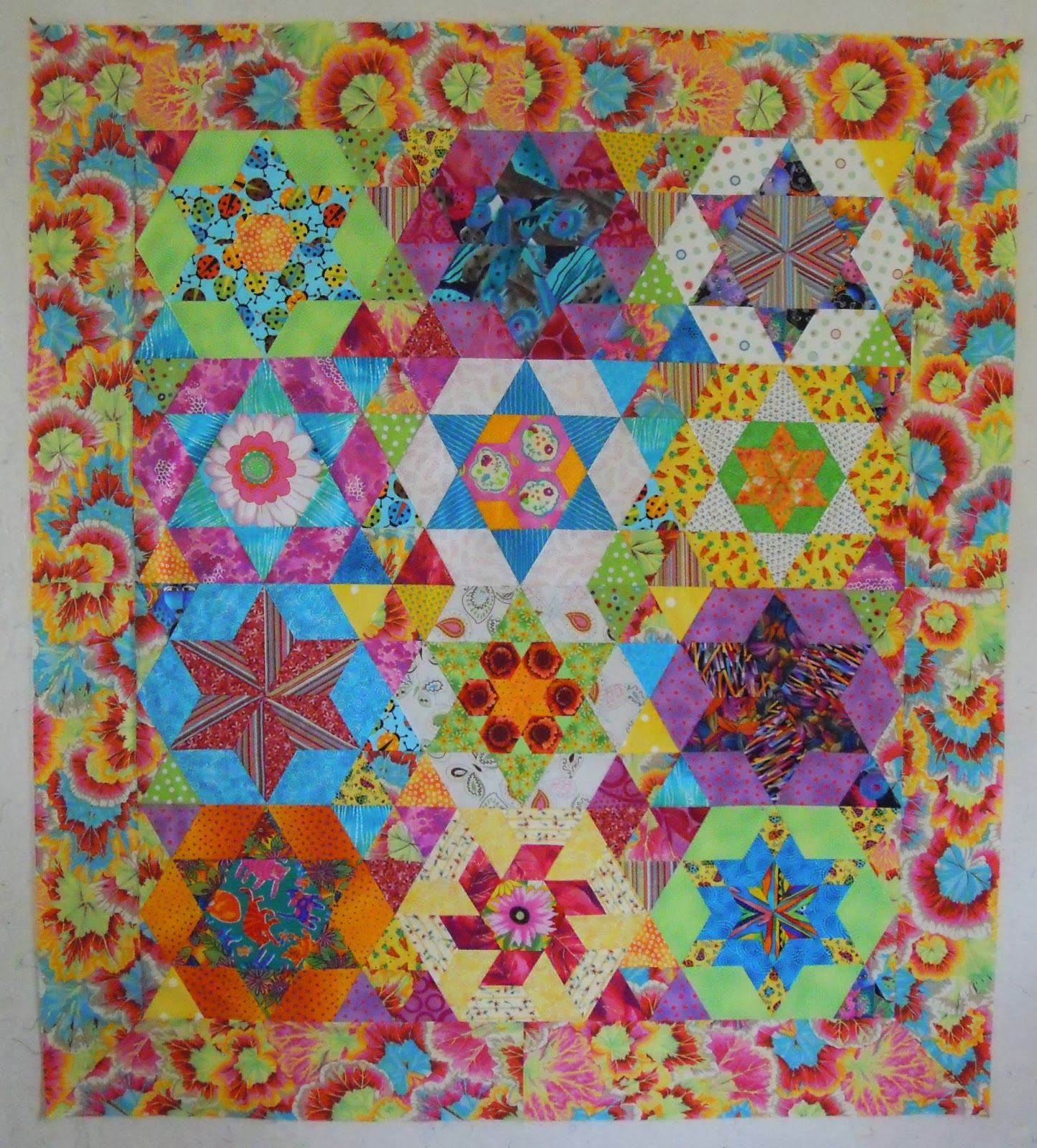 In my first 6-pointed star sampler (above), the edges of the blocks blur into the setting units and it's hard to see some of the stars -- that makes the piece interesting and it holds the attention of the viewer longer.

In the second one, I used the same background fabric for the first twelve stars.  When I put them up on my work wall, I loved the color palette, but it was too blah and choppy looking.  So I made more stars with different backgrounds to break things up a bit and create some interest.  The tumbling blocks floating through the quilt are part of the setting and I'll cover that along with other "filler" ideas in the next couple steps 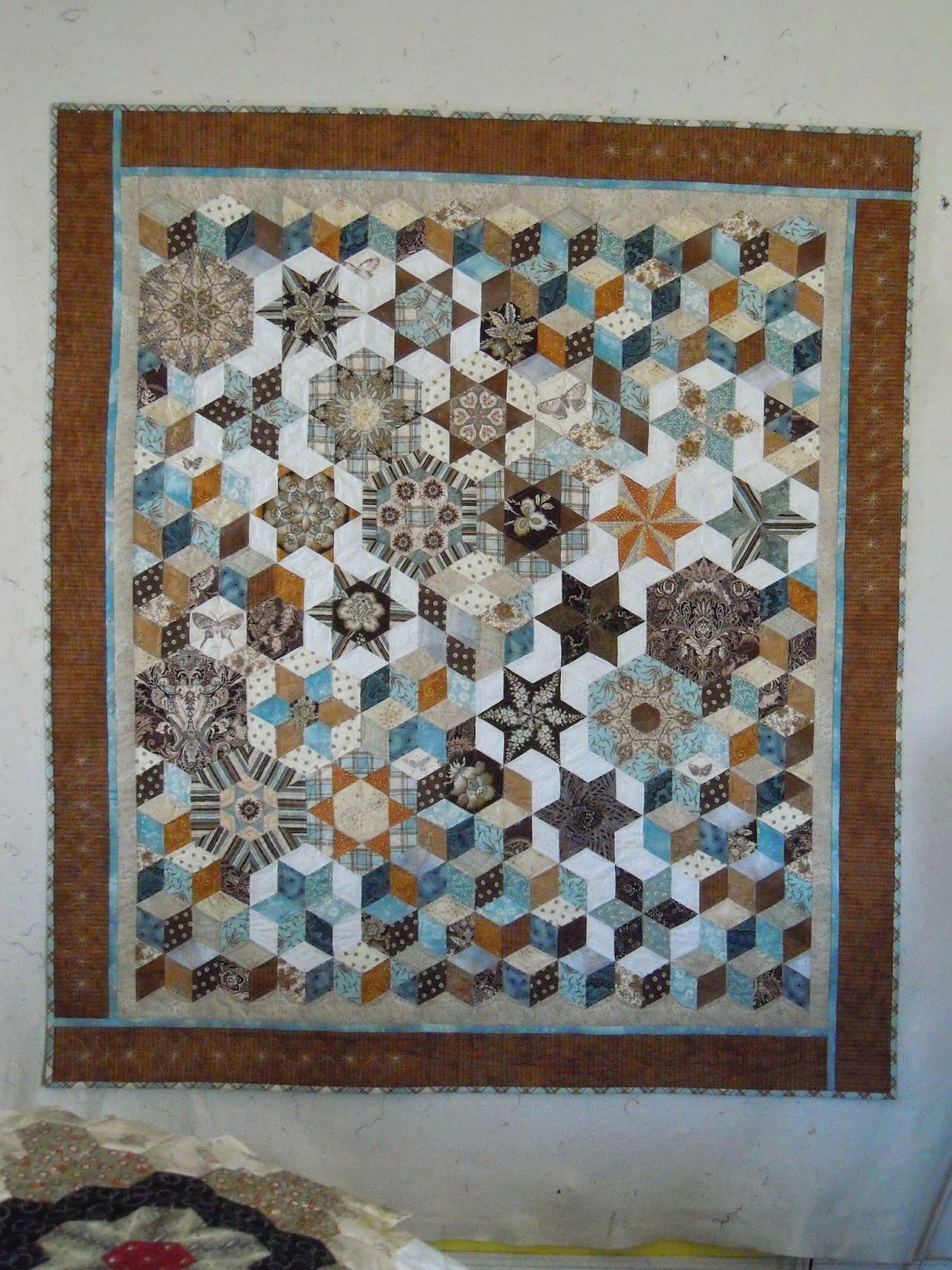 If you have a copy of Marti Michell's Volume 6, Six is for Hexagons -- look at some of the photos and ideas in that book.  And this is a link to my Pinterest board of ideas -- http://www.pinterest.com/huey0314/60-degree-diamonds/ -- check it out for inspiration, too!

So now it's your turn to experiment and audition.  Experiment with all the layouts covered above and see which one you like best.  Look at 6 pointed star quilts on Pinterest and Instagram for more ideas.  If I can be any help at this point, you can e-mail photos and questions directly to me as well -- maryhueyquilts@hotmail.com

Hope our weekend is pleasant everywhere and you can get out for a walk!!