Template Tips for a Scrappy Border

I'm currently enjoying Faeries and Fibres Soupcon QAL.  Step 4 was published on 2/14 and Karen's explanation of how to piece the border is very thorough.  But I'm a template devotee these days so headed straight to my worktable to ferret out the right templates. 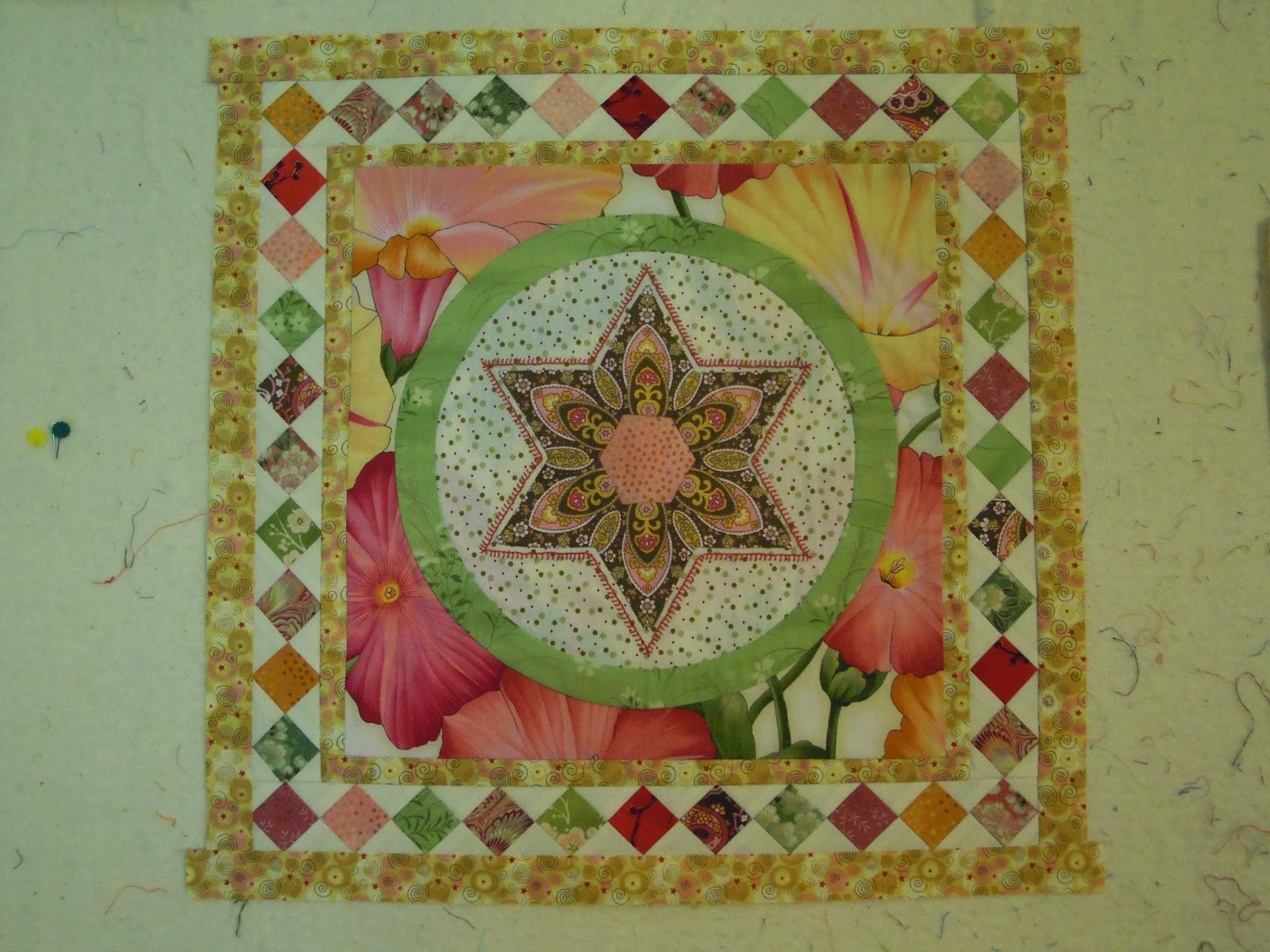 Karen's instructions called for cutting 1 1/2" squares so I needed to find a 1" finished template.  It's part of Marti Michell's Set N and there are also has two triangles that work with it.  Just what I needed to cut my pieces.
Now you are saying, why does she need a template to cut 1 1/2" squares?  I know that because that was what I would have said 10 years ago.  My cutting is more consistent with a template than a rotary ruler -- there is less variation in the pieces.  It might take a bit longer to cut my pieces but that is negligible given the excellent results of my finished work. 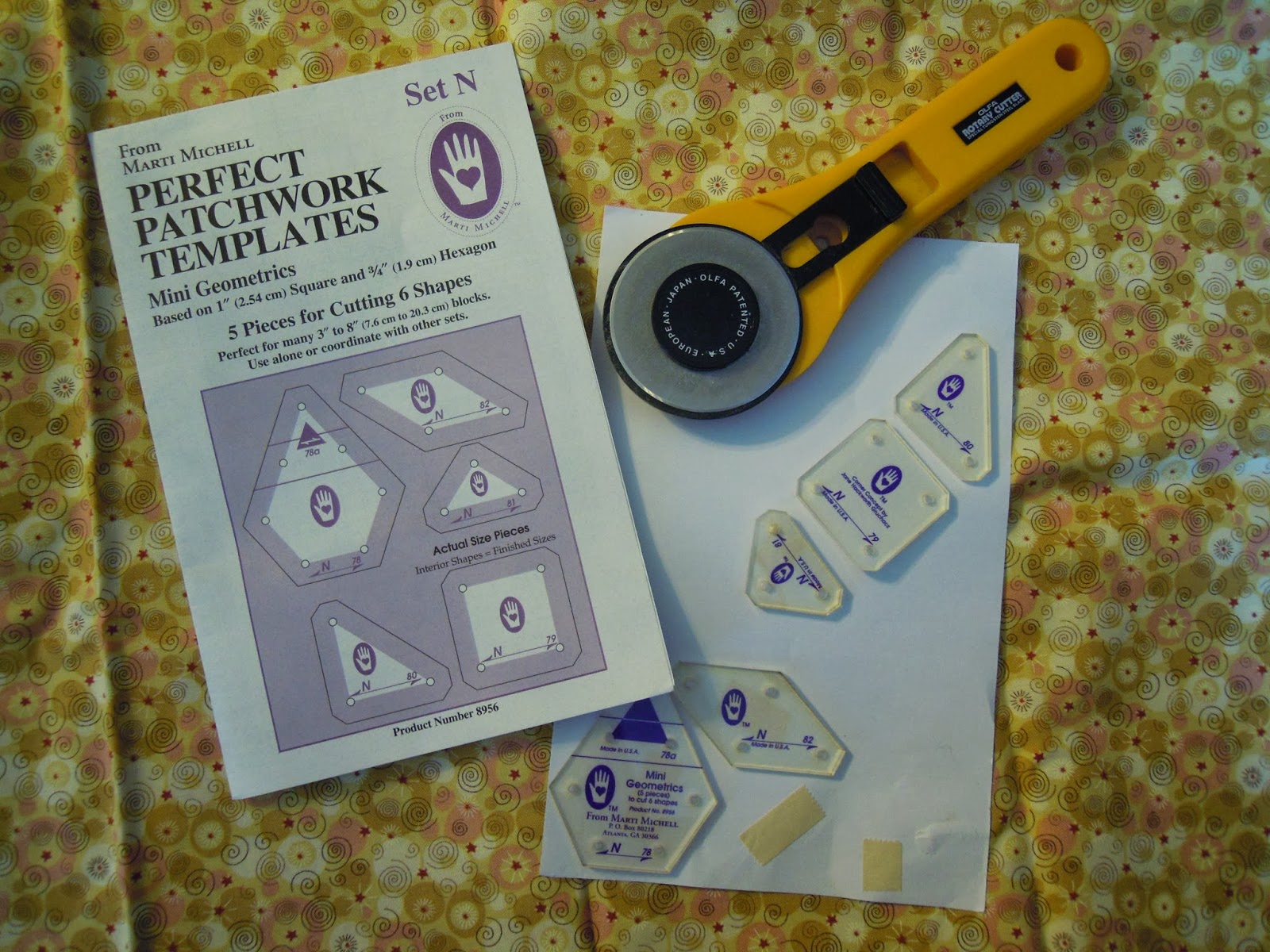 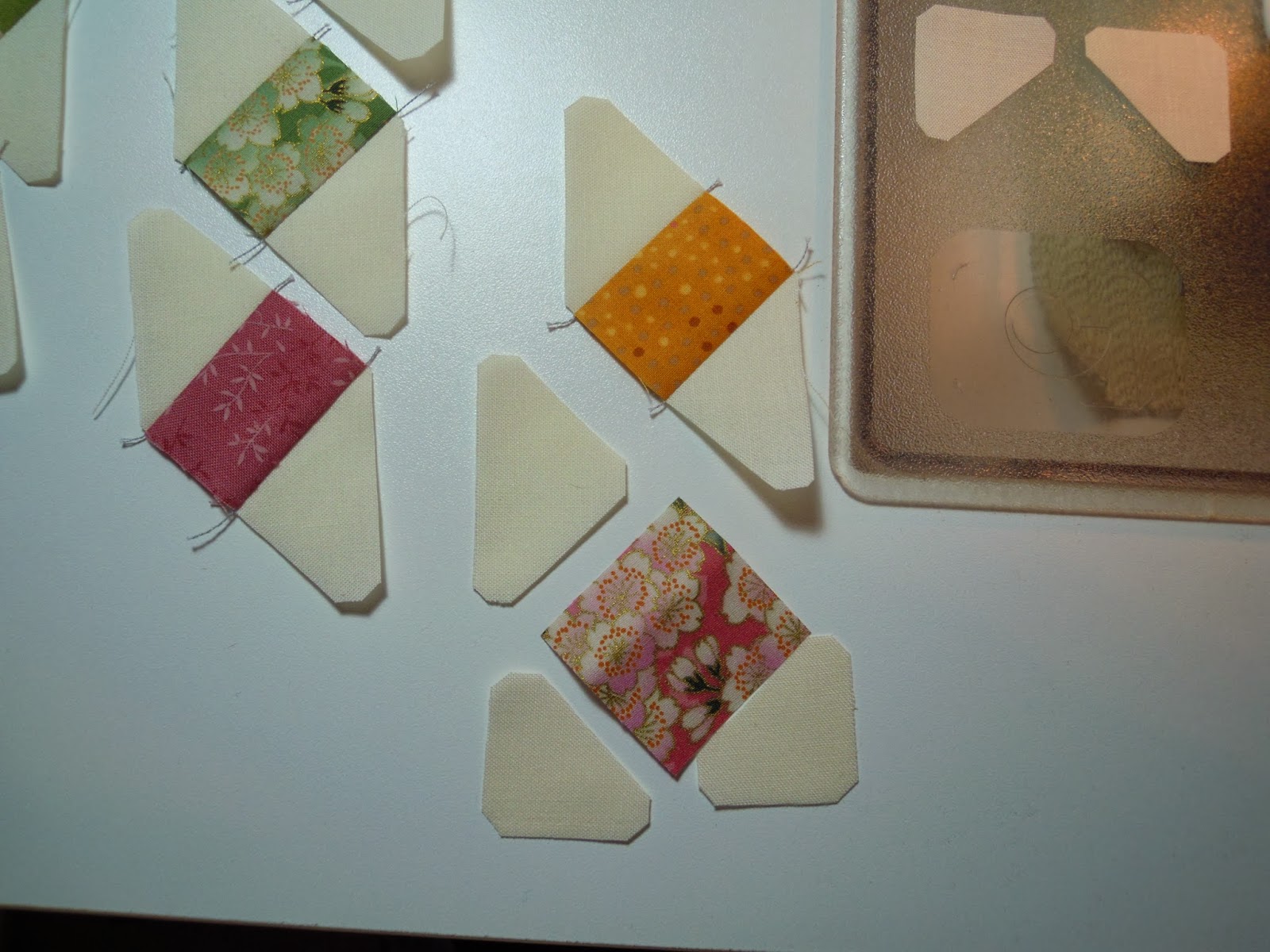 The piecing went quickly and as I assembled the four border strips, I got to thinking about the other sizes of the same border layout I could make with Marti's Set A or Set B or Set Q or Set S or Set T.  And some of the sets have a couple square/triangles groups, so that's quite a few size options.  There will be some math to do, but it's definitely going to be added to my "idea arsenal"!  The measure to use will be the diagonal of the border squares since the squares are set "on-point" and using a plain border on each side will make it easier to manage the sizing. 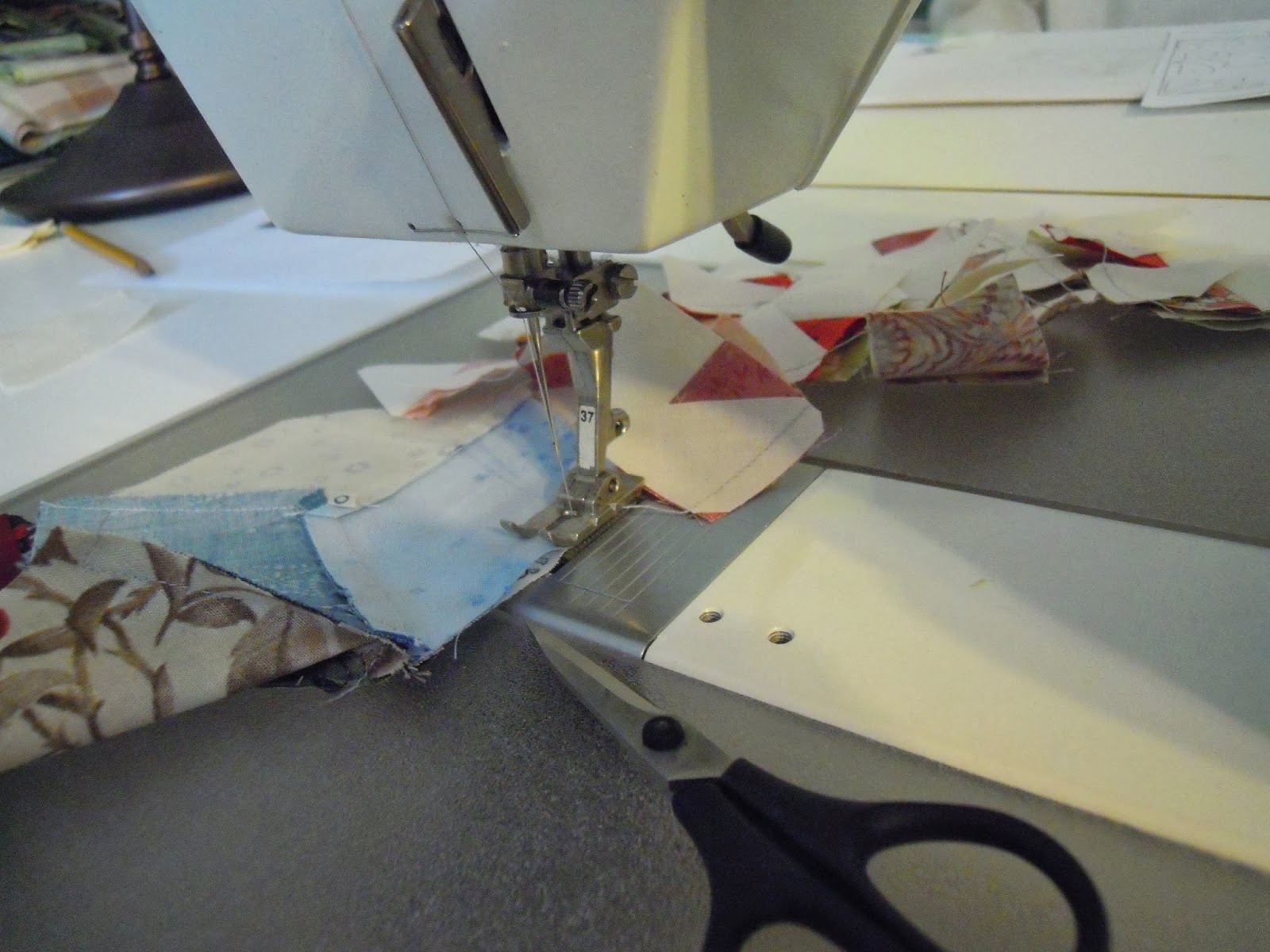 Here they are, coming off the machine and I'm setting together some tumbling block units as an "ender" -- the beauty of Set-In Piecing Simplified is that it is based on chain piecing!!  Love having something else "growing" so effortlessly! 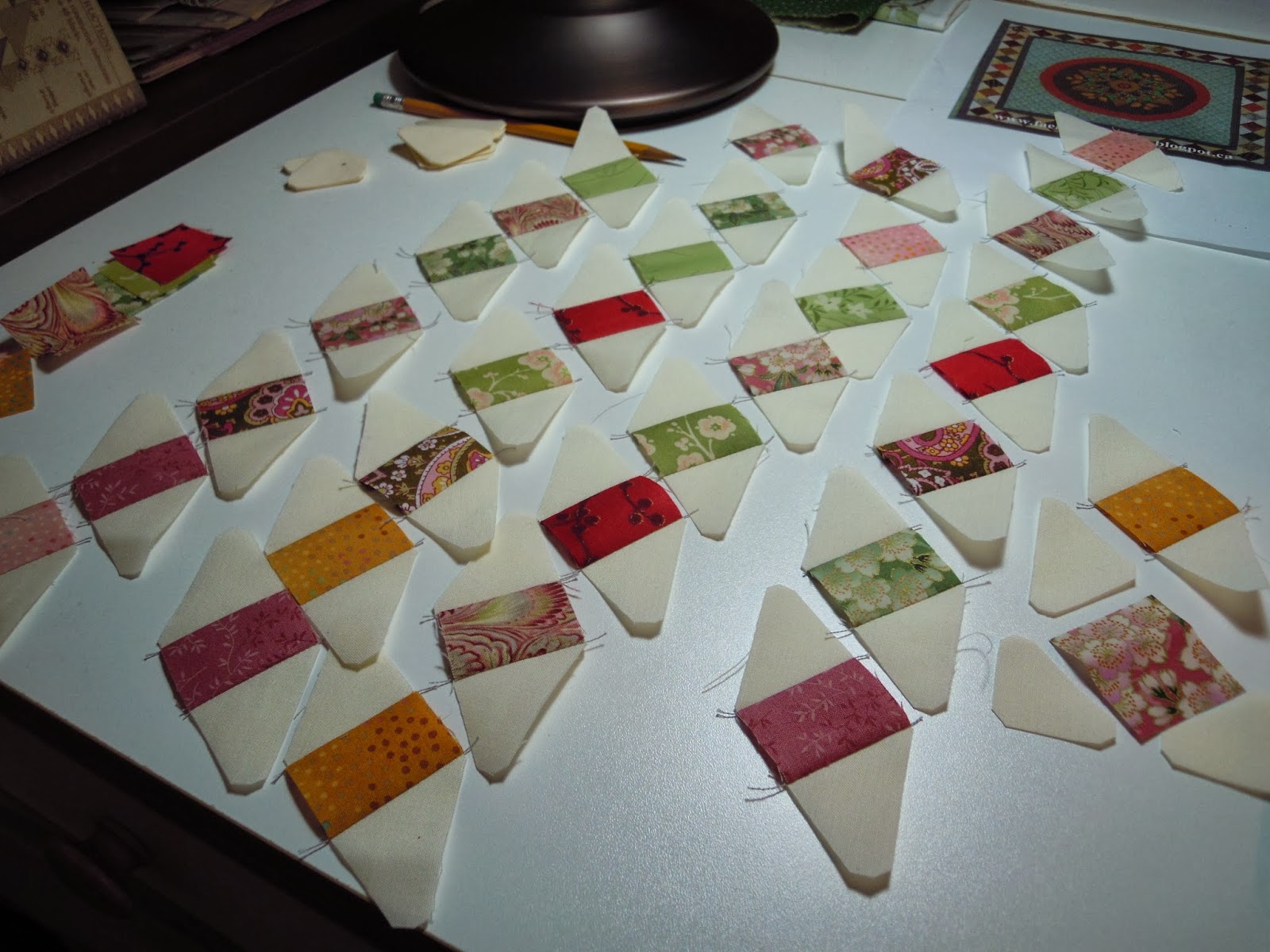 Since I used a dozen or so different prints for the border squares, I laid them out before stitching the units together so the prints would be spread around.

When the stitching was done, I trimmed my center block to size and added the first narrow borders which I cut 1/4" wider (and on the vertical/lengthwise grain for stability) than Karen specified (just in case).  My pieced borders were about 1/8" short, so I trimmed the piece again before I added the pieced borders so they would be a perfect fit.  Since I cut the outer narrow border 1/4" wider, I'll still be able to trim what I've done so far to her specifications (17" square) when Step 5 is published (really looking forward to that)!!

Take another look at the first photo -- those corners are dead-on!!   I'm very pleased with how clean the piece looks so far.  And I'm using a "sacred stack" -- fabrics that I piled up because they look so good together.  I hope I'll be able to work in more of that big floral!!

I hope you can make time to stitch today!