I've been using the "One Monthly Goal" goal link-ups at Elm Street Quilts for a couple years now to push myself through this BIG project which I began in February, 2017.
I fell in love with Marge Sampson-George's Dodecagon Quilt (thanks Instagram) and since it wasn't available in the United States or on-line at that point, I used my Aussie family connection to buy the templates and papers! 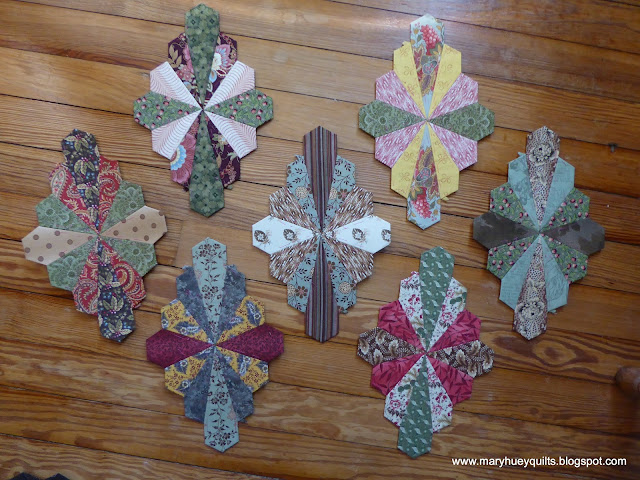 Over the course of piecing the dodecagons, I fell in love with several other English paper pieced designs that featured a medallion style center - long story short - I designed my own layout using the dodecagon blocks and several of the ideas I loved.  I felt certain I could get one quilt done instead of starting two or three more! 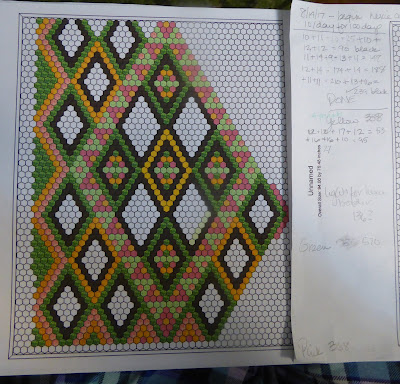 All the dodecagons have been finished for almost two years. I lots of time in 2018 basting dozens and dozens of black, green, pink, and yellow hexies. 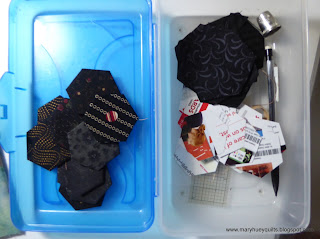 I think this past weekend was the fifth time I've spent a 3-day stitching retreat focused on assembling the units.  First I outlined the dodecagons with black hexies. 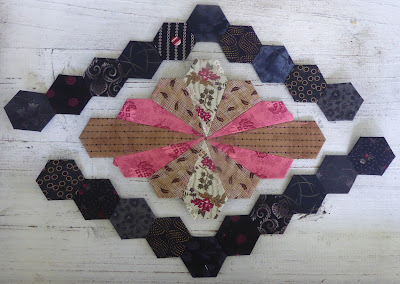 Then I made enough strips of green hexies for the entire quilt.
All this time, I was designing and redesigning the layout in Electric Quilt 7 -- I kept changing it a bit here and there until finally I just had to make myself quit messing with it -- you know how that is!?!
Early in 2018, I laid out and began the assembly of the large central unit that features my five favorite dodecagons alternated with four large floral motifs. Stitching retreats gave me the focus to gradually organize the four corner sections and work out the best assembly approach.  After each retreat, I continued to chip away at the assembly process.  Several times I've had to stop and baste more green hexies -- if I never see a green hexie again, it will be too soon. 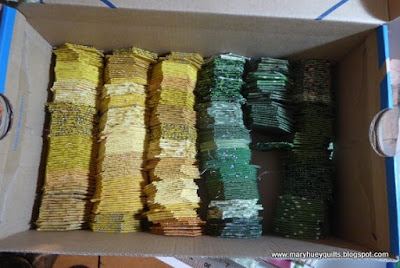 There have been weeks when the living room floor has been covered in hexies -- good thing the kids are grown and out of the house!! 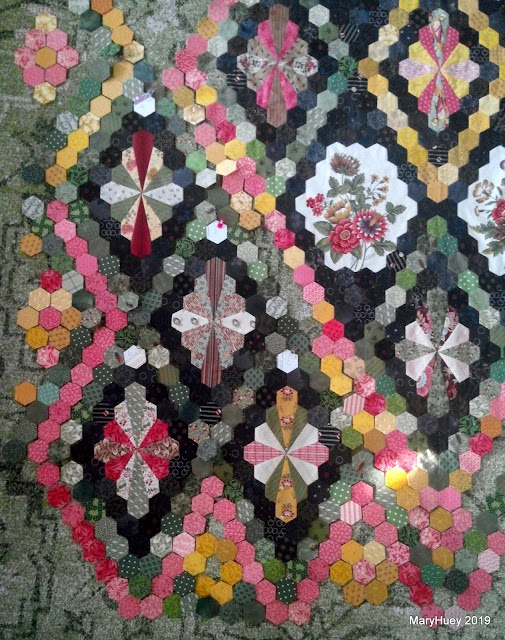 The first three weeks of this year saw a messy living room again as I organized and stitched up the last five setting units so that when I arrived at this month's retreat, I'd make some serious progress!! 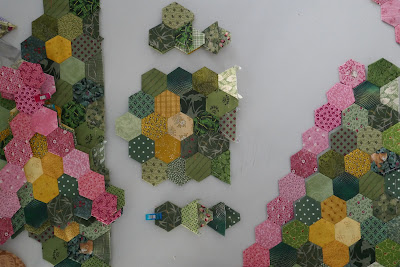 I arrived with my last few green hexies! 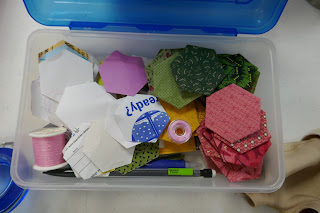 Happily I had an entire table to lay out the units and stay organized.
Nothing to do but stitch, nibble, and chat for three days!! 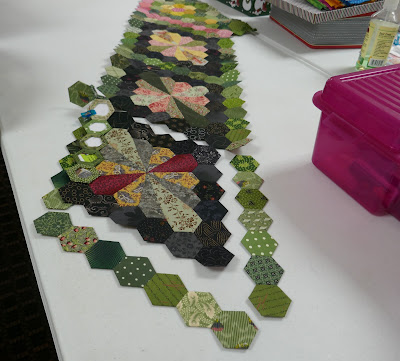 Soon I was popping out papers right and left! 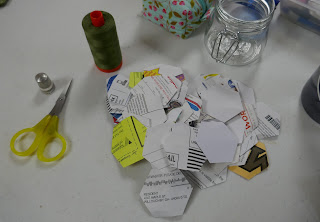 I didn't quite make it all the way, partly because I discovered I was six green hexies short -- argh!
This picture gives you some idea how I break down the sections.
You can see lots more of my assembly details along the way by typing "dodecagon" into the search bar -- about six blogposts pop up (though not in exact chronological order).  The one I've had the most feedback about shares my personal tips for assembling the dodecagon blocks. 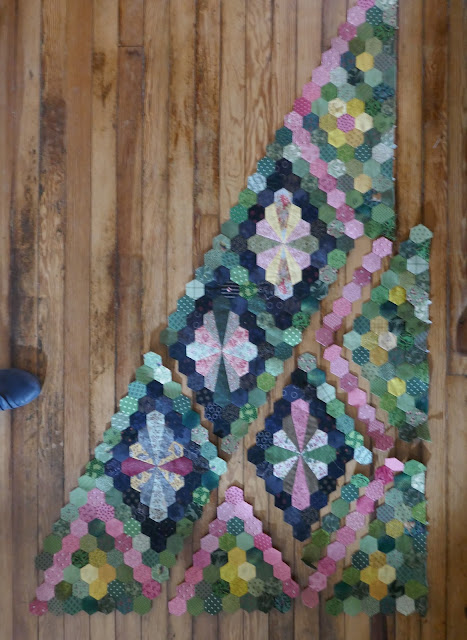 And here it is -- a finished fourth corner!
(sorry about the poor lighting -- it's late!) 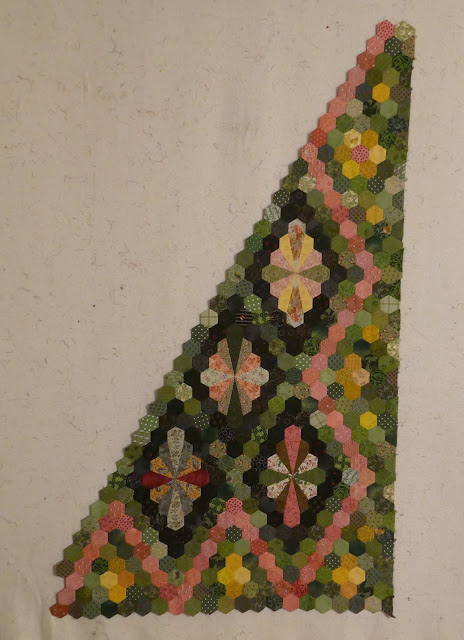 Now I can begin to pull the other sections off the auxiliary design board (storing them there has kept them flat and unwrinkled) and spend February stitching up the final four long seams!!
I estimate I have just 268 one-inch seams to stitch!! 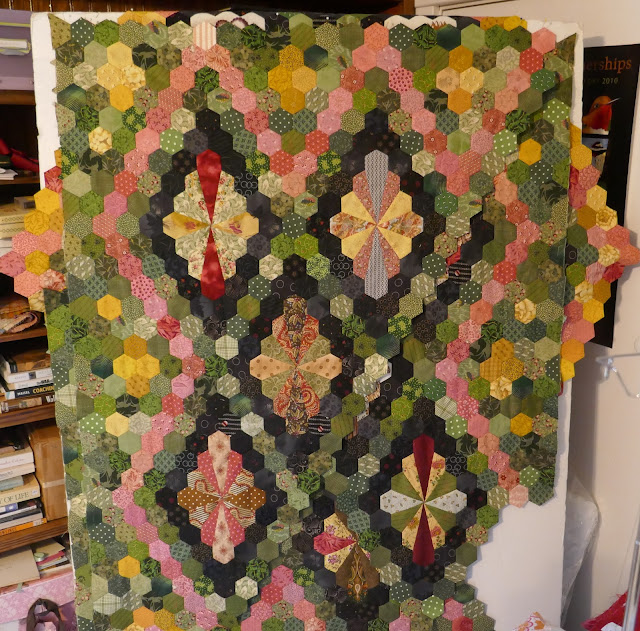 Wahoo!!
The only down side of finishing the piecing will be having to plan the quilting -- never my favorite step.

Of course, there's another hand stitching project in the wings and with any luck that will be my focus during my next stitching retreat at the end of February!!
Mary

Linking up with "One Monthly Goal" for January 2020 with Elm Street Quilts!