Yep, there is something taking over the design wall in my studio!
Inspired by Jessie Fincham's (aka @messyjessy1 on Instagram) tutorial on piecing a Scrappy Irish Chain (HERE) and . . . . . . 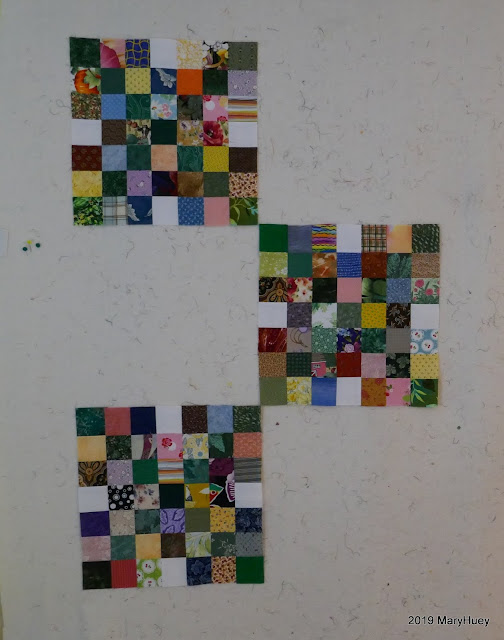 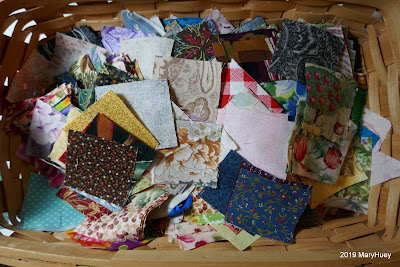 My modification is that my blocks are 7 by 7 squares (her's are 9 by 9) and
I'm setting scrappy dark greens squares to criss-cross each block on the diagonals.
There are white squares (the background fabric) in the #4 position around the outside edges and everything else is scrappy, scrappy, scrappy!! 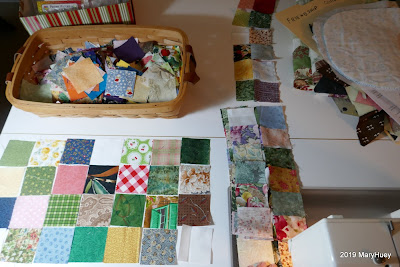 One of the pitfalls of making a truly scrappy quilt is getting caught up in making it "pretty".
"Pretty" has it's place in quiltmaking, but it's tough to achieve in a truly scrappy quilt.
"Go with the flow" has to be the watchword during the piecing process or you won't use up many scraps. 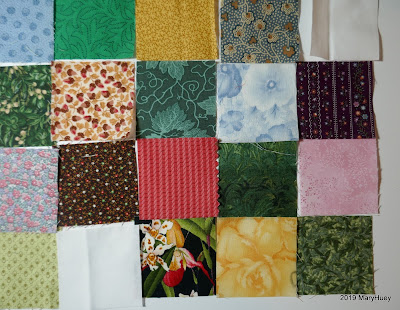 That being said, it is a good idea to pay attention to "value".
To illustrate, this corner of one of the blocks is scrappy and the greens are in the correct positions, but if you squint at it, that top center blue square is so close in value to the green squares it touches that it interrupts the green diagonal pattern. 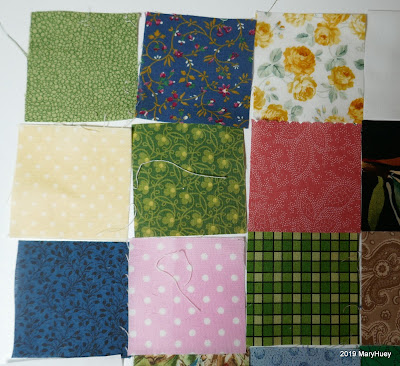 However, if I switch the blue square and the yellow floral, now squint, the green diagonal is more distinct and that's good.  You might not think this block is "pretty", but that won't matter once we get a bunch of blocks set together.
Value is the critical element of fabric placement in scrappy quilts! 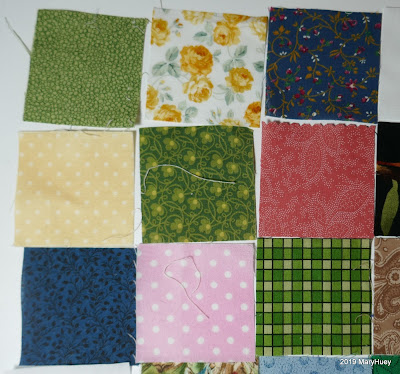 I'm chain piecing the blocks together in rows -- here are the first and second rows pieced into pairs. 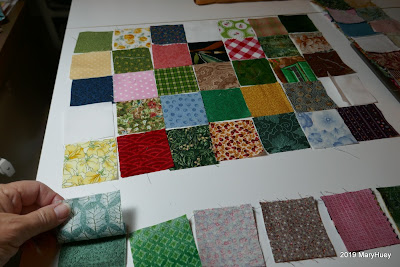 Now I'm leaving everything attached and adding the third row. 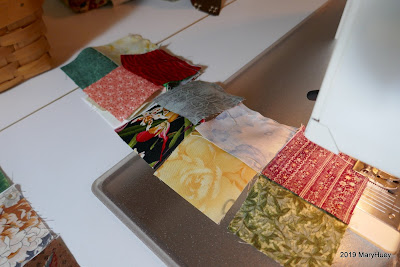 Here's the fourth row being added. 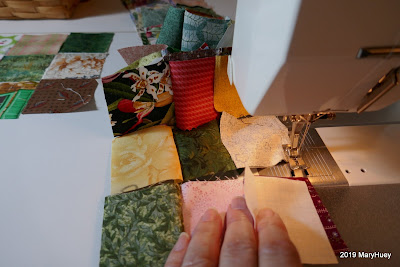 Once I add a row of squares to the "grid" (on the right and coming off the back of my machine), my "ender" or "sew-off" is to stitch two rows of the previous block together (on the left).
I leave all the thread chains in place -- no clipping apart -- so nothing gets tangled. 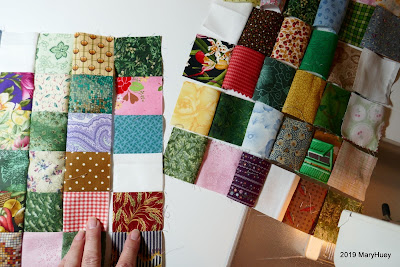 It took a little trial and error to figure out the easiest way to press the seams in opposite directions without clipping all those chain threads, but then a happy accident presented the solution. 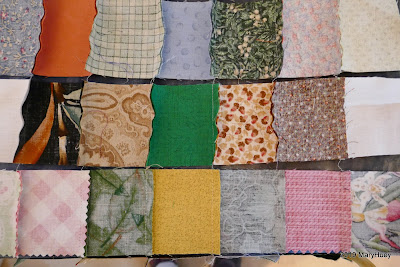 If I let the pressed rows hang off the edge of the ironing board, they aren't in the way. 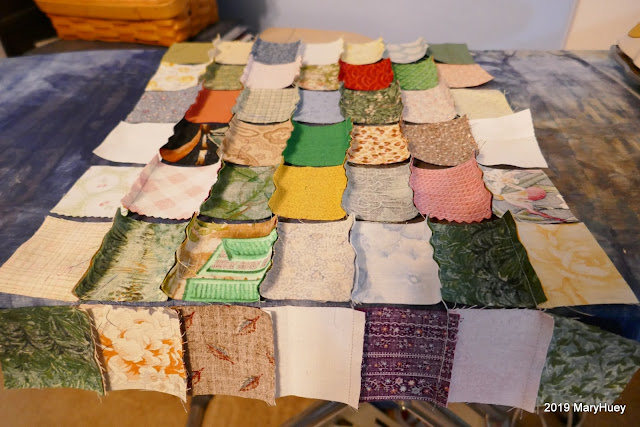 Now I can slide my iron right (or left) down the next row effortlessly, pressing the seams in the opposite direction of the previous row which is hanging down over the edge of the ironing board. 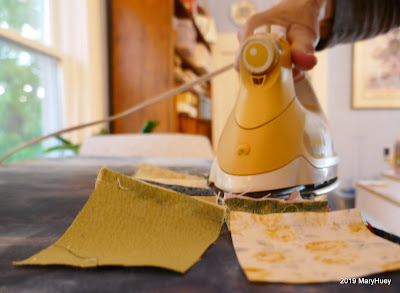 At this point, I can work up one of these blocks in about an hour!
And happily each block uses 45 squares from my basket! 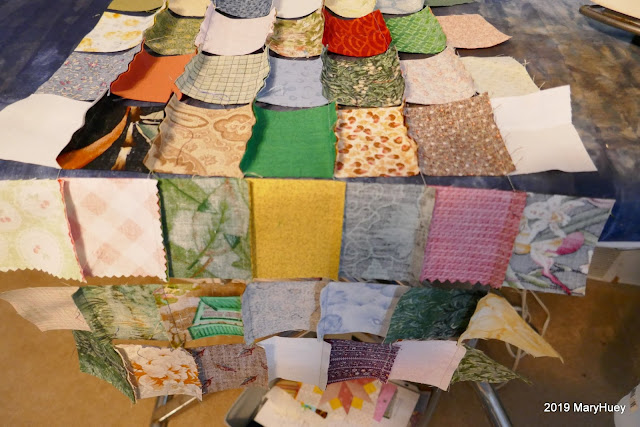 That means I'll use 1014 squares for the twin size quilt I have planned!!
Don't worry, there's a backup box of 2 1/2" strips if I start to run low or the assortment of squares gets too ugly. 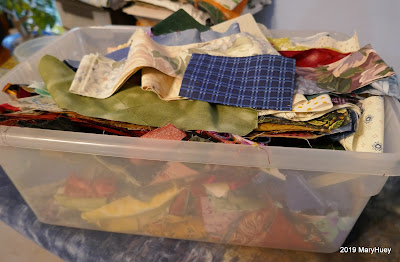 With no deadline for this quilt top, it could take much of the summer but it's a perfect escape from "the world" when I just want to piece something without starting a new project!!

Birding migration is winding down here in Ohio, so I'll be spending more time at my sewing machine There have been a couple fun new additions to my backyard garden in the past couple weeks!
A green frog has moved into my little pond.  It's taken us two weeks to spot and identify him.  Up to now, it's just been "something just jumped into the pond!!"  I'm not sure if he is coexisting with the hundreds of American toad tadpoles in the pond or eating them -- there are so many it's hard to tell?!? 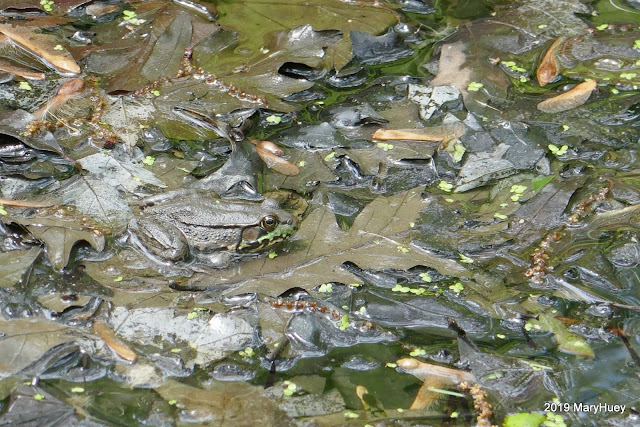 And while this fellow isn't a new resident (he was likely born in the pond sometime in the past couple years), hanging out on the back porch is a new venue for him.  I say "him" because since toads began to breed in my pond a couple years ago, I've learned the males are smaller than the females.
He spent most of the morning sitting along the edge of the back porch while I came and went - just sunning and watching!  Very chill fellow! 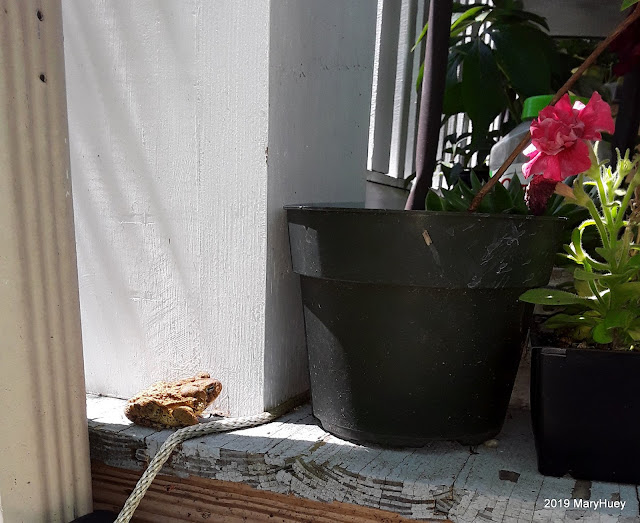 Next week, I'll show you the progress I made on my big English paper piecing project over the past month!!