This summer, I showed you my design for this hexagonal center medallion quilt that would absorb the 52 hexie flowers I have been making as part of the #fussycuttingsewalong on Instagram.
That pair of pheasants in the center is one my favorite blocks from the weekly sewalong. 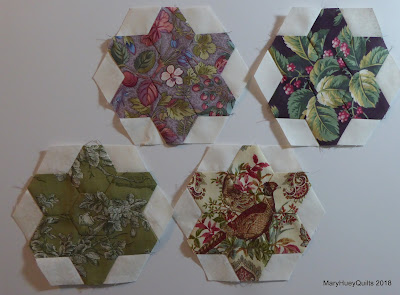 I have been admiring and collecting photos of hexagonal medallion quilts for several years. The growing stack of blocks inspired me to design my own medallion layout as their final resting place. 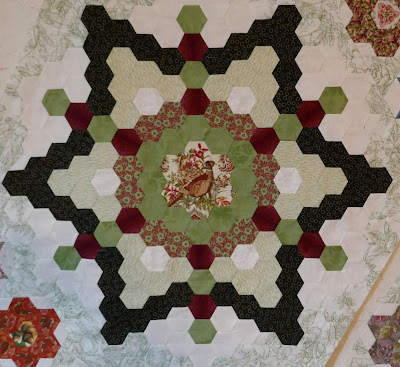 I also realized that the stack of  twenty-some Morris Hexathon blocks from 2016 were the same size and could be blended in with the current blocks.
Yea!!!  Bigger quilt faster and one less UFO!! 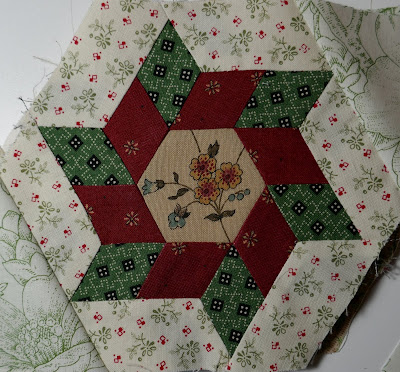 I used the Set-In Piecing Simplified technique (downloadable PDF teaching guide available HERE in my Etsy Shop) to piece all the blocks and during the fall, this medallion center was my "sew-off" while I chain-pieced through the weekly blocks.
I broke it down into several units that could be "mass produced" and then added each to the central motif. 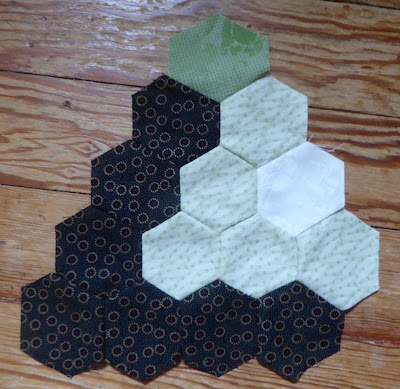 The setting fabric I selected builds a soft frame around the entire piece.
I made it a bit larger than needed so I could trim to make it fit -- none of my "math" ideas were going to work so took the easy way!! 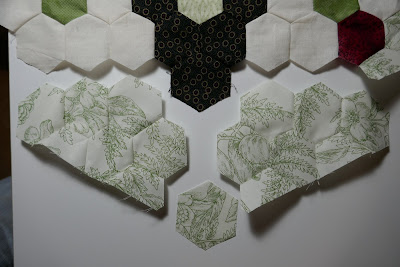 In the end, I trimmed 1/2" off each side for a perfect fit.
Because I made sure that the outside edges of the medallion were straight of grain on all sides, there wasn't any stretching!! 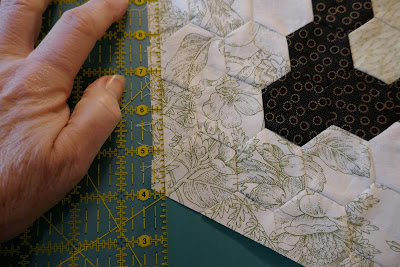 Last week, I pieced the final hexie flower and finished piecing some "half flowers" for the ends of some of the rows. 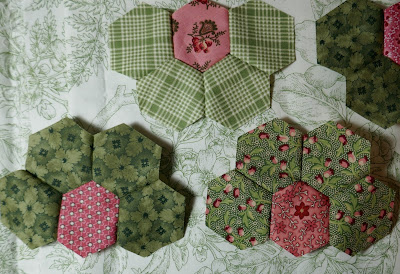 For the past two days, I have been shut up in my studio setting everything together and it looks terrific!!  Since I've been adding white background diamonds to each hexie flower as I made them, it was easy to prepare them for setting with the simple addition of an equilateral (60 degree) triangle!
I used Marti Michell's Set G to cut all my hexagons for a finished 3" block.
That meant, cutting with the equilateral triangle ruler would yield the correct size setting triangles 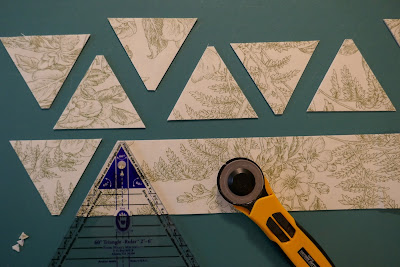 I needed a few half-triangles (easy to cut with Marti's tool) and with two layers of fabric, wrong sides together, cutting "rights" and "lefts" was effortless.  Marti's tool features point trimming as you can see below and taking the time to make those trims set me up for easy and perfect matching! 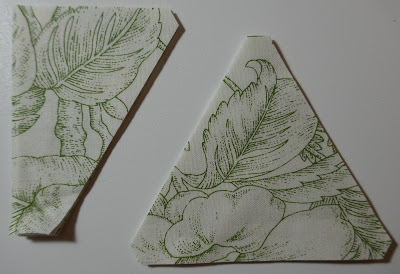 Most of the blocks have been on the design wall for weeks -- there has been lots of moving around and shifting to achieve a "spontaneous" balance.  The Morris Hexathon blocks didn't work (to my eye) just mixed in randomly so they are divided into diagonal rows in each corner.  There were also a few six-pointed stars from teaching demos that are positioned evenly around the central medallion.  All the hexie flower blocks were allowed to stay where I first plopped them unless there two very similar ones together - such as same color, same fussy cutting style, etc. 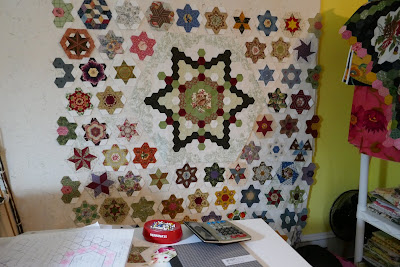 All the hexagon blocks, except for those at the ends of the rows, were prepared by adding triangles.
Each triangle has one straight of grain edge and I always keep that edge horizontal across a quilt. 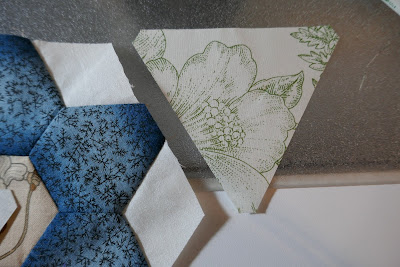 If my block piecing is accurate, the triangle will match the corners of the hexagon block perfectly!! 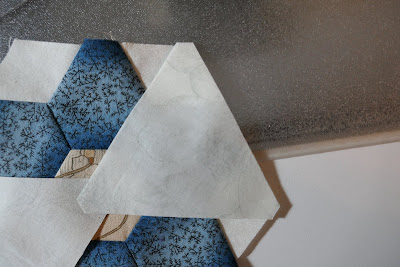 Ready to piece a row!!
It goes fast as there are only straight seams from this point forward!! 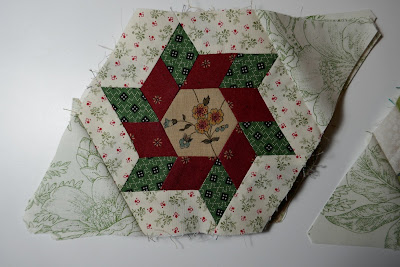 Here's a trick I discovered a couple years ago to match angled seams when working with diamonds.
If you have consistent seam depth, when you layer the two units right sides together, match the end of the previous seam to the corner of the diamond.
Here, I'm sliding the corner of the diamond (top layer) over to match the end of the seam on the lower layer. 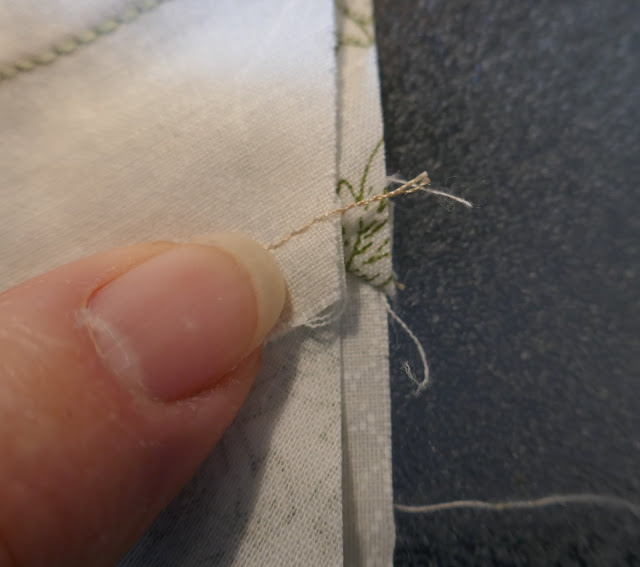 It's faster and much less frustrating than searching for the perfect spot with "pin poking". The intersection of the diagonal seams will be accurate 95% of the time -- no matter the actual depth of your seam allowance and I don't pin!!
Try it next time you do this! 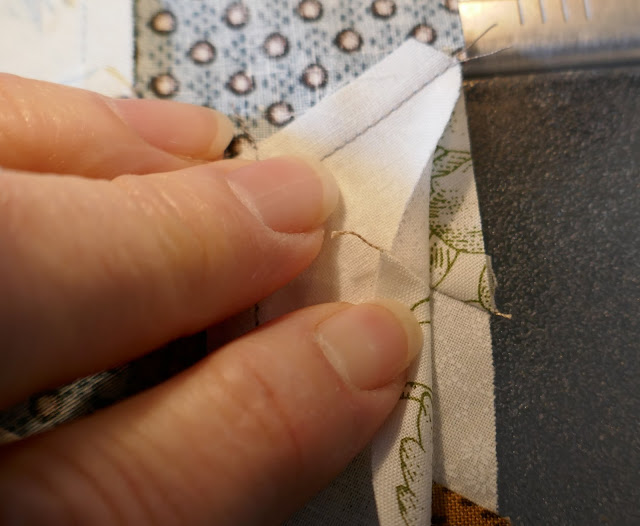 To maintain straight seams only construction throughout the quilt top, I pieced the center of the quilt in sections rather than long rows.  Two of these large triangle units set on opposite sides of the center medallion were the key! 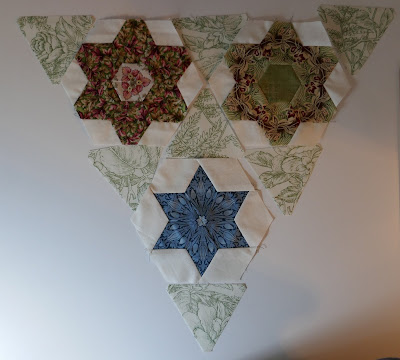 Once those were added to the center medallion, I made the left and right units by working in short rows. 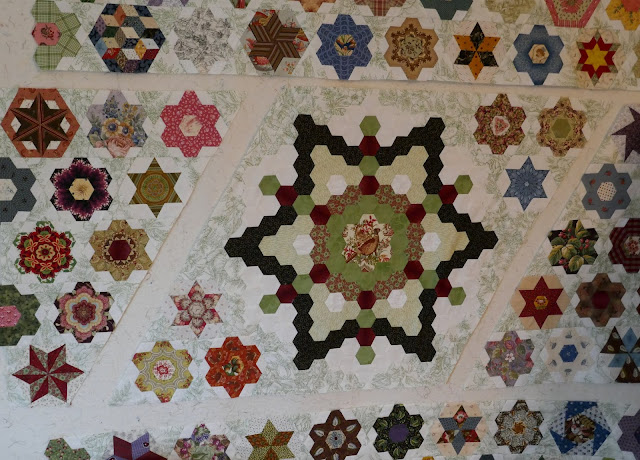 This is the result of two pleasant afternoons in the studio!!
I have left it in 3 sections at this point while I think about my quilting approach.
Do I machine quilt or hand quilt or some of both?
If I machine quilt, will I work in sections which is easier for me to manage and I'll do a better job. 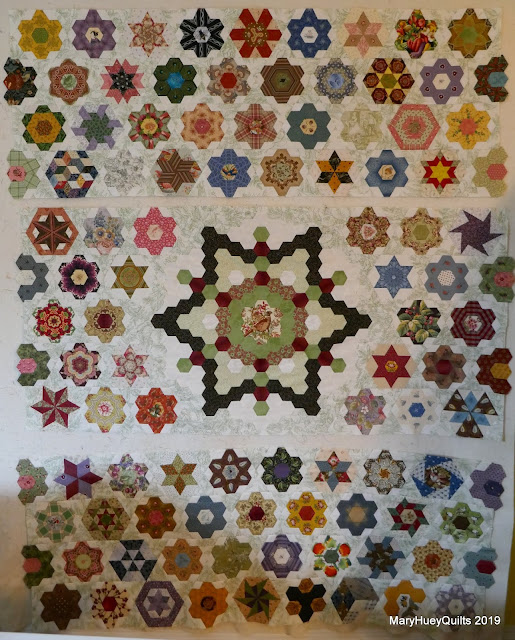 So for a few days, I'll enjoy this view from my machine while I fiddle with some neglected UFO.
The questions will answer themselves and I'd like to make this piece one of my 2019 finishes!!

If you have a question about my approach to setting this quilt together, please leave a comment below and I'll answer it in the comments so everyone learns from it, too!