I hope your week is going well.  We are having some lovely weather and I've been a bit distracted from my stitching by a local birding survey project.  Monday afternoon, I spotted two very exciting birds that I rarely see -- black-billed cuckoo and golden-winged warbler.
This is a picture of the warbler from allaboutbirds.com  It might have been only the second time I've seen one in 55 years of birding!!  Very exciting!!
But I am keeping up with Barbara Brackman's Morris Hexathon!
I fiddled with my templates for about 30 minutes trying to decide which ones might work for block #17 which Barbara named "Folly".  My favorite folly in England is the "temple of Apollo" at Stourhead -- if you've seen the version of Pride and Prejudice with Kiera Knightley, it's the location of the big argument between Lizzie and Darcy in the rain.

Finally, I relented and paper pieced them.  In the end, it was the easiest approach.  Since I have been reintroduced to the skill for several of the blocks used for the #smorgasblocks follow along, it worked out well. 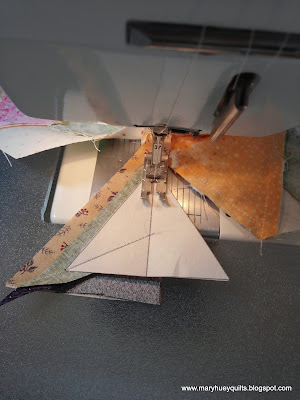 I copied the pattern onto light weight paper, cut it apart and pieced six of these units.
The trickiest part was trimming them without cutting off the seam allowances -- there was lots of self-talk for the time it took to do that. 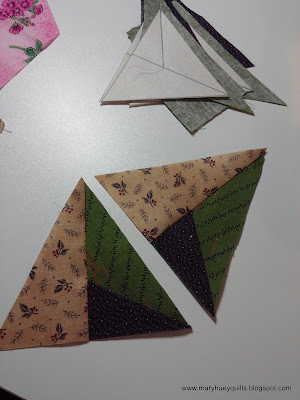 I left the paper in place until the block was completely assembled. 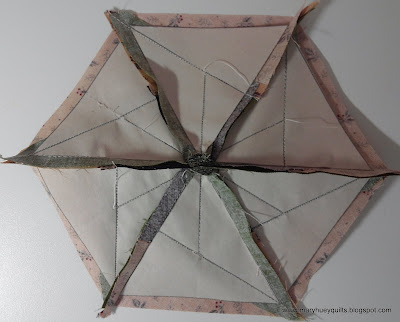 And here's the finished block -- I'm pleased with how crisp it looks! 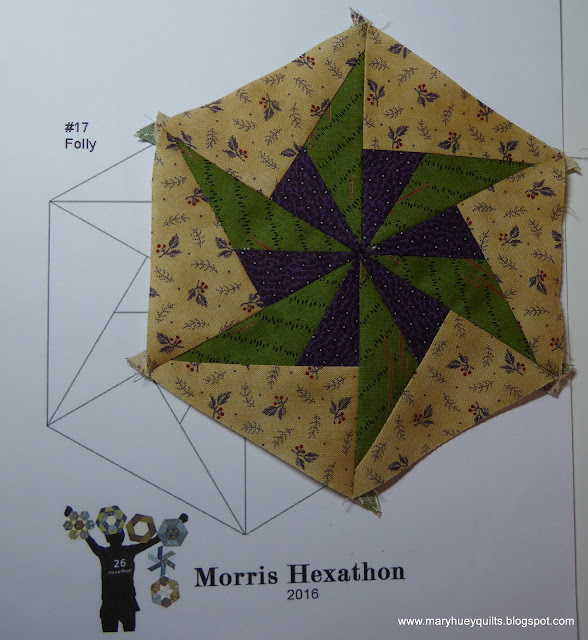 Block #18, Parquetry was another easy one and I was able to use template G47, a half hexagon. 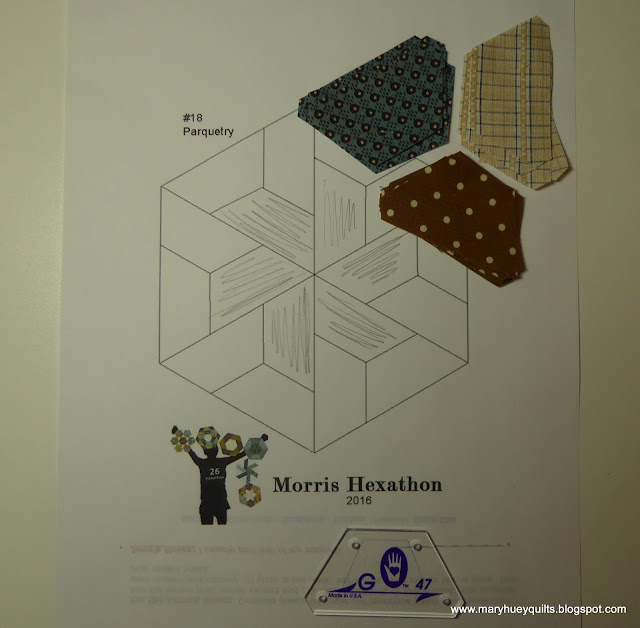 After I cut the pieces, I auditioned two layouts and decided to replace the brown dot -- the value between the blue and brown was too close and I wanted one of them to be darker so the design of the block was more obvious. 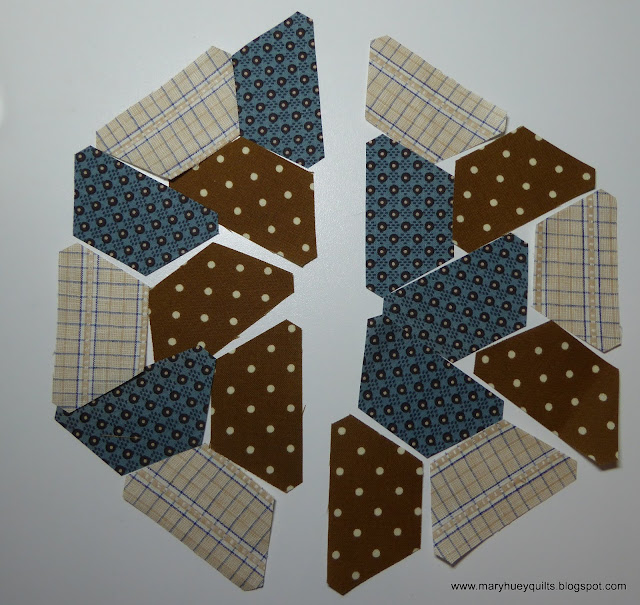 At this point, I had planned to insert a little video of me piecing the units below but either I deleted it in the process of transferring it from the camera to the computer or like so many things, it's hiding somewhere on the hard drive which I haven't discovered quite yet.
So we'll try it another day.
This brown is enough darker in value that I was happier with the results. 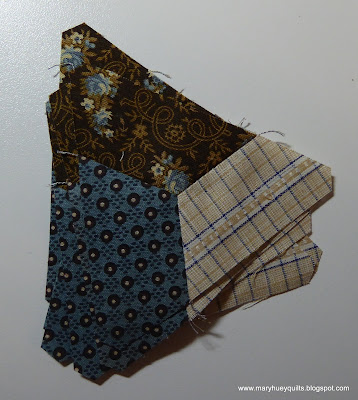 It's not as outstanding as the example in Barbara blogpost -- you should look at it as the fussy cuts are impressive! 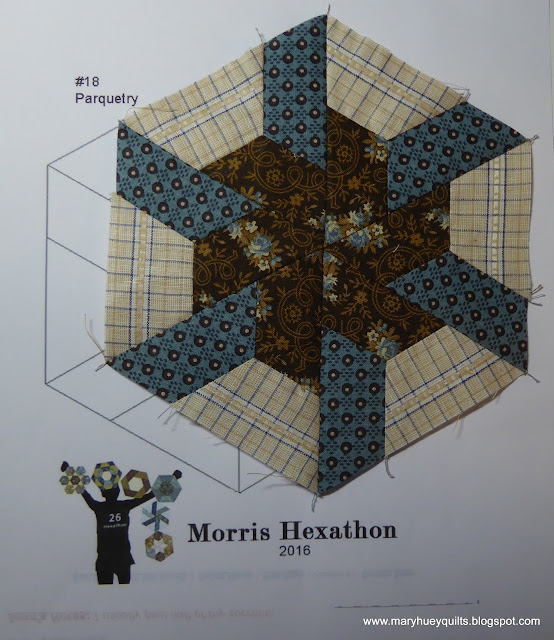 Since my design wall is currently empty, I experimented with some layouts. 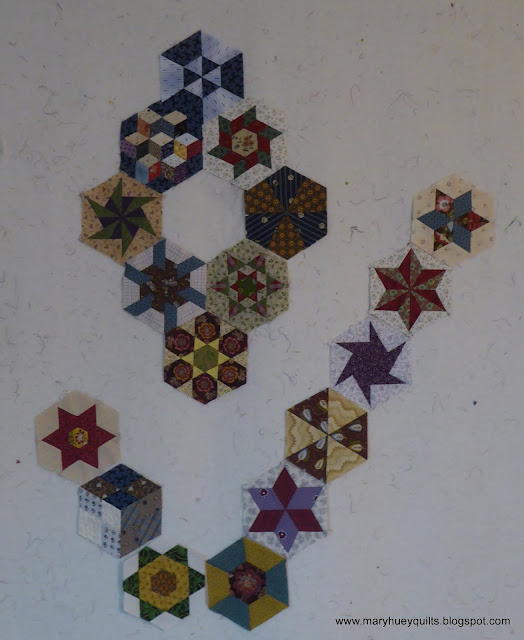 The empty spaces will be filled with large hexagons probably a print or several prints. 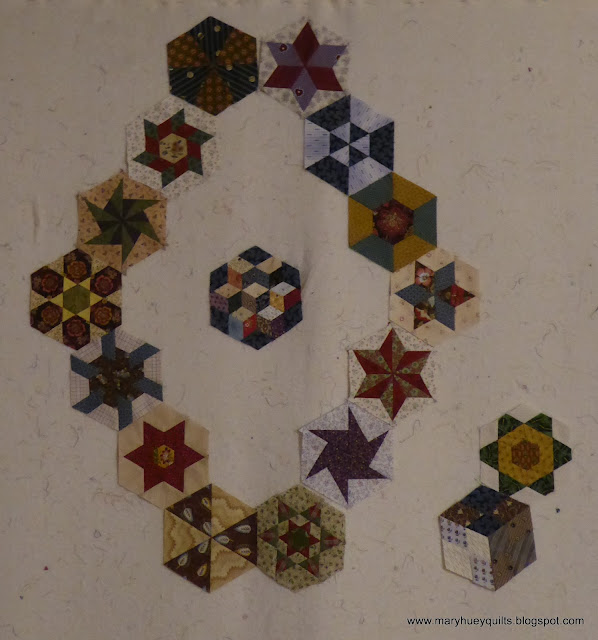 There are still 8 blocks to go and I'm looking forward to translating some of these into large size blocks to include as ideas in my hexagon piecing workshops.
I might even keep them as a loose set for a while to use in workshops for a demonstration tool for designing settings?  What do you think of that idea?
Mary