Sometimes I Just Need a FINISH!!

Do you have days when you just need to finish something?
I did yesterday!!
My studio is still torn up because spring has arrived and with it comes the season of bird migration. 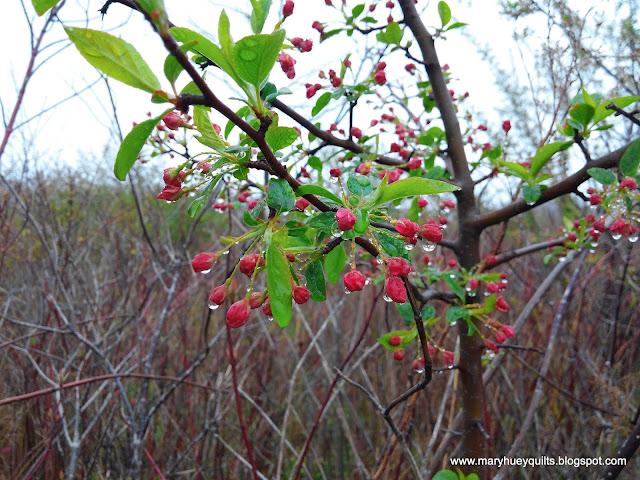 I want to be outside enjoying all the "firsts of the year" -- crabapple blossoms ready to burst open.
Or the meadows of a local park dotted with mist-bejeweled webs of orb spiders! 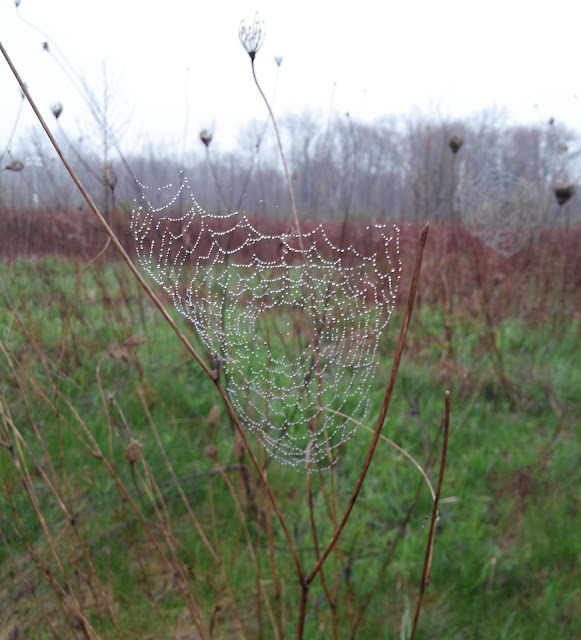 I want to sit and watch the pine siskins draining the finch feeder at the rate of about 1/2 pound of seed a day!?!  What began a week ago as 1 bird off and on during the day has become a flock of 12 to 15 birds for most of the day. This feeder has not been vacant for over a week.  There is cracked corn and a wealth of fresh dandelion seeds in the surrounding lawn, but they only have beaks for the finch feeder.  Northeast Ohio is their wintering range according to Sibley's Guide to Birds but I rarely see them until late April/early May and then typically just for a day or so as they are return to Canada to breed.
A local birding acquaintance, Jon Cefus, shared this lovely close-up with me. 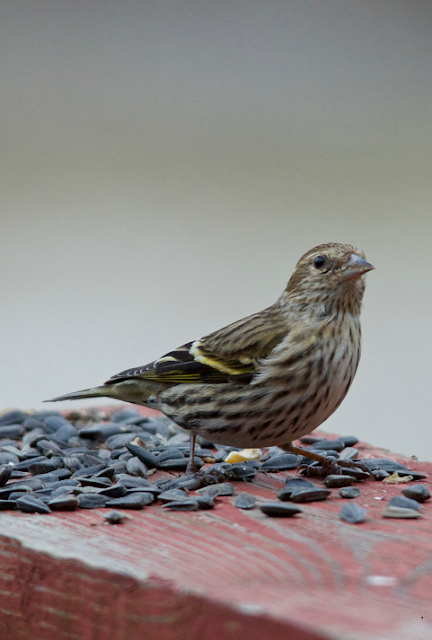 Siskins are related to goldfinches, same size, but don't have the striking colors and can be easily mistaken for a sparrow.  For such a social bird, they are a bit cranky at the feeder with lots of bickering about who gets to sit on which perch.  The amount of yellow (see the wing bar) varies and they have a thinner, pointed beak unlike the other small finches.
Fair weather and southerly winds brings birds into our area over night during the spring so every morning brings the possibility of something new but with only northerly winds for the past 12 days, we aren't seeing much action and are getting a bit restless.  So yesterday, my birding daughter and I headed over to Northwest Ohio and Magee Marsh for 3 hours of up-close birding on a boardwalk through a lakefront marsh forest remnant that is one of the top 10 birding spots in the USA. 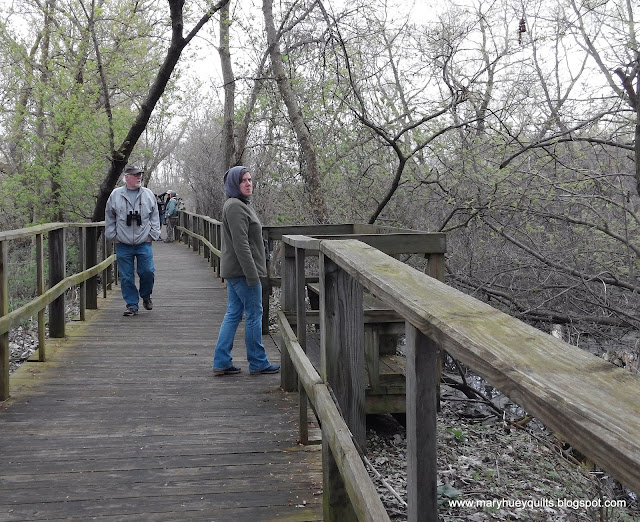 We had a modest 50 species and only 8 warblers but there are always interesting "firsts" to enjoy.  A whip-poor-will might have been a first for both of us -- we've heard them on trips in the southern US but I can't recall actually seeing this night insect hunting bird.
And then there was this tidy pile of feathers -- looked like a thrush was someone's breakfast.
I wonder if anyone saw the event? 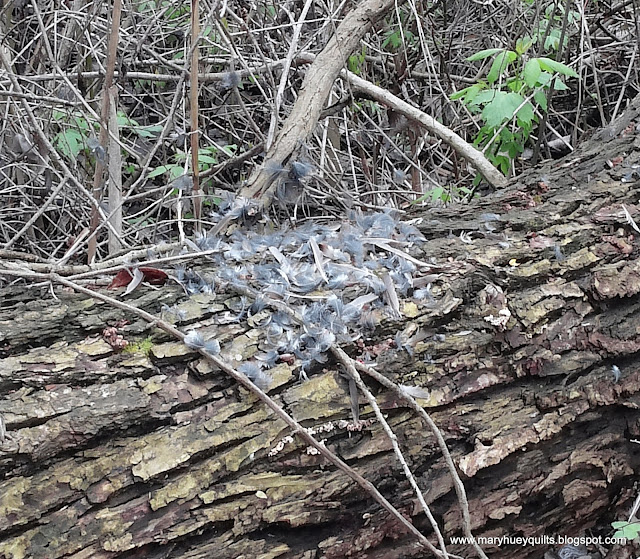 However, my lack of stitching progress is also frustrating so yesterday I decided a FINISH would be just the thing to settle my restless spirit.  So when we returned home, I set to attaching the lining to the dilly bag I've been piecing for the past month.  It's Brigitte Giblin's Nundle Dilly Bag pattern which she says should take about a week -- perhaps the decision making about the fabric slowed me down? 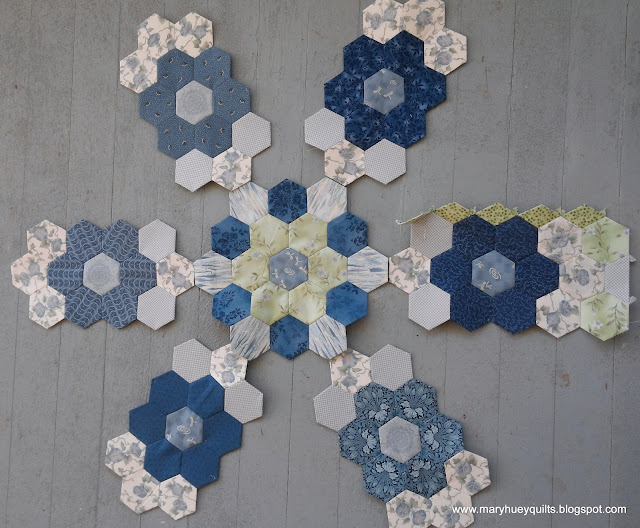 It turned out larger than I expected so I've decided to give it to my knitting daughter for her birthday.  I added two pockets -- a long one with several divisions for needles and a smaller one for miscellaneous bits. 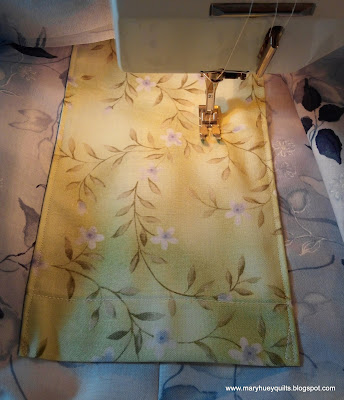 It was an easy process to make the lining, add the pockets, create casings and ties.  The lining is interfaced to give the bag more body. 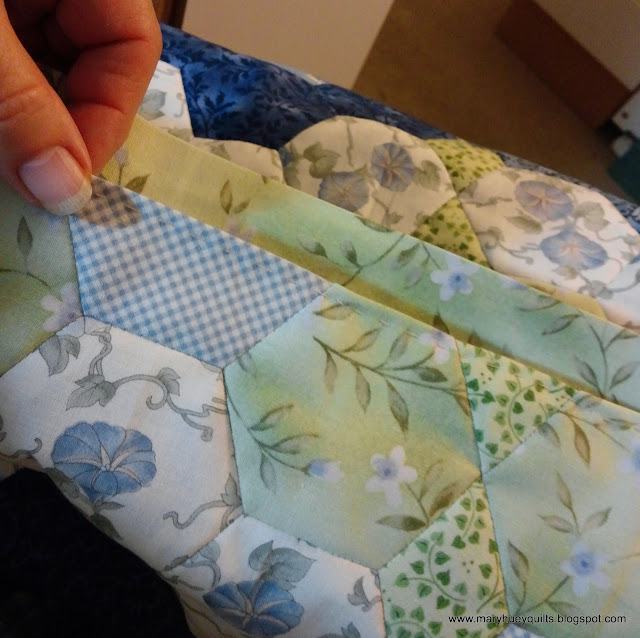 The only problem is that I can't seem to get a good picture of the bag which is large enough to hold enough yarn to knit a sweater.  Perhaps my iron gives you some perspective. 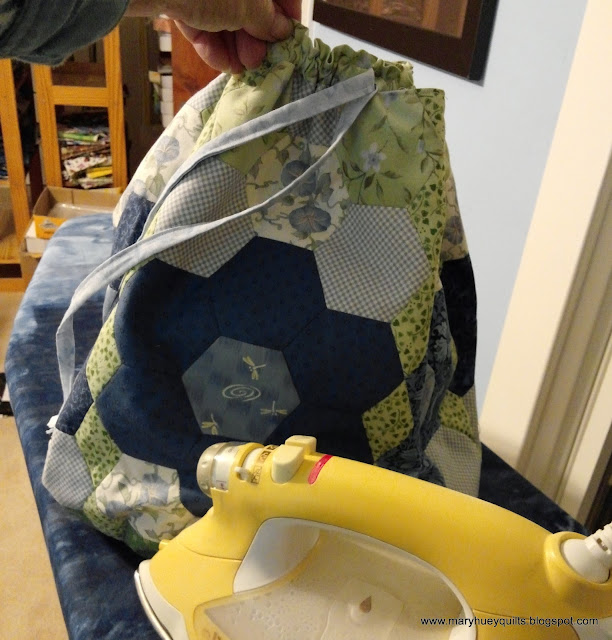 I think I'll make another one by machine and see how the Set-In Piecing Simplified technique works for a shaped piece like this.
So it was a very good day -- the best of both my worlds -- a day of birding and a stitching finish!  The frosting on the cake was looking up from my computer just now to see the first of the year ruby-throated hummingbird sucking nectar from the feeder.
Maybe today, I'll paint . . . . .
Mary Huey