I've been writing out annual quilting goals since 2011 -- that first year, it was simple -- reduce my fabric stash by 100 yards.  I had tough rules -- any fabric purchased set me back a few yards.  By the end of the year, I had managed to pull it off right at the wire -- 163.5 yards used (but 63 yards purchased which left me with a net reduction of 100.5 yards.

In 2012, I used my  2011 success as a springboard and set the goal of using 212 yards of fabric in the course of the year.  I eased up on myself and ditched the "purchase-debit" rule.  Once again, I made it just under the wire with 212 5/8 yards used!!  It also resulted in one of my most popular guild lectures -- How to Use 212 Yards of Fabric in One Year.  My best strategy was making lots of quilt backings to go with my stacks of finished tops -- oops, there goes another 7 yards!!  Best part?  It led to a life-style change as the stacks of fabric continue to shrink -- shelves that vomit fabric are a thing of the past!! 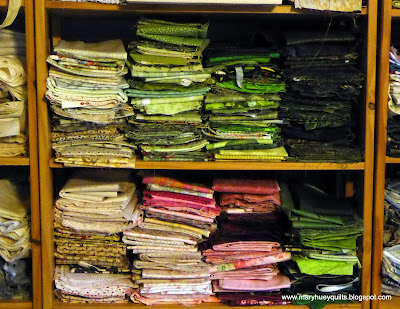 Those goals of using my stash first really taught me to enjoy "shopping" there -- it's a great challenge to use what I have and it has pushed me to a more confident creative point of view.  Now I actually am excited to run out of fabric because some of the quilts I finished were so much better than if I had gone out shopping for "more-of" . . . . . !!  This gem is one of my stash-only accomplishments and there is another one just as big!!  Exciting!! 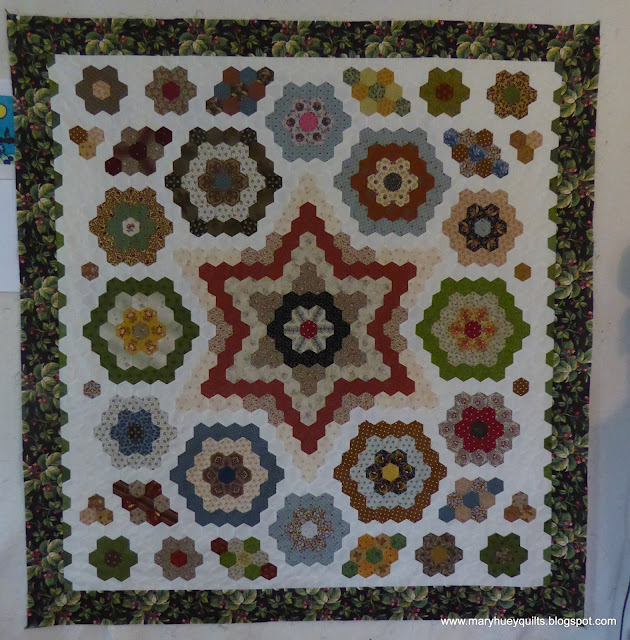 In 2013, I was loosey-goosey and had no specific goals -- I lost my mother that winter and I think I was unable to think ahead.  I stitched relentlessly to carry me through those emotional days.  There are always plenty of UFQ's in my studio -- so when I felt restless or unable to settle on a project, I would just pull out another old one and focus on it.  My stitching journal records 26 quilt finishes!

2014 found me starting the year with a detailed survey of UFQ's -- there were 44 finished quilt tops (down from 72 in 2005) and 14 sets of quilt blocks.  I had two goals for the year -- to continue to whittle away at the UFQ's and to transform myself into a quilt maker who proceeds through a project from start to finish in one smooth process more often.  That was huge!!  I made good progress on both fronts though I realized I'll always have three or four projects going at the same time.  One being planned, one being pieced (or maybe two), one being machine quilted, and one being hand quilted.  By the end of the year, I'd finished 23 quilts and reduced the UFQ list of finished tops to 30!!  I can remember when these two shelves were packed to the top -- now they look a bit empty, don't they? 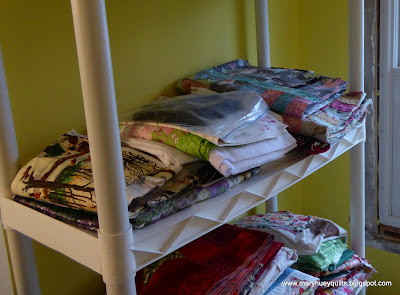 My favorite finishes for 2014 were the three string star quilts I made for my children -- the star blocks were from my husband's grandmother's estate though I think her mother-in-law pieced them in the early 1900's.  It took a century to put them into the hands of Huey's but Mary Emma is smiling now!! 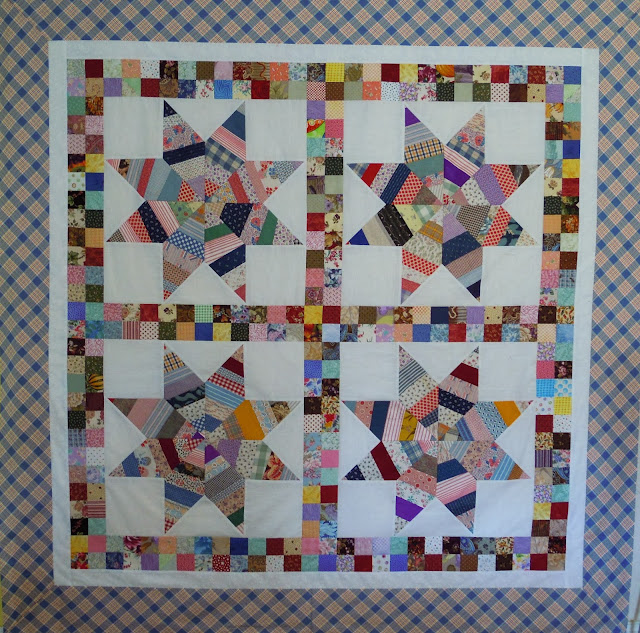 At the beginning of 2015, I found the APQ's UFO Challenge chart and filled it with some of my oldest UFQ's.  If you aren't familiar with the APQ Challenge, they draw a number each month and that's the project you tackle.  You can see my notations for what month each project drew.  There were just three complete finishes but up until the fall, I made significant progress on most of the projects and they've been added to my "ready-to-quilt" shelves!! 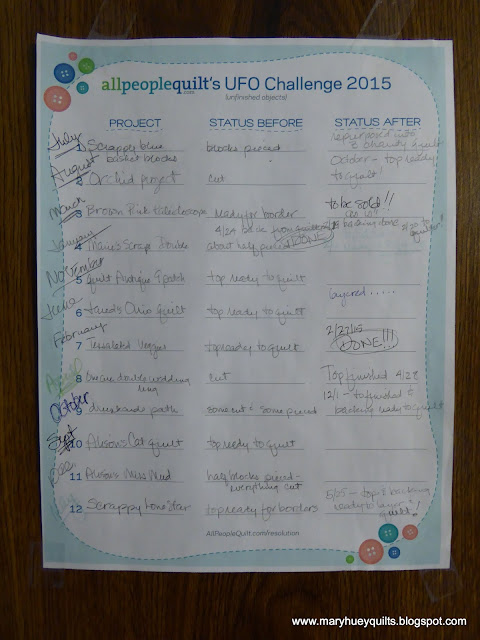 In addition, I intended to make a scrappy twin size donation quilt every month as I worked through the color shelves in my studio to tidy them up.  I made it through 3 months -- pink, white and beige neutrals, and green (seen below).  There is a blue one underway as well, but I just ran out of steam -- probably because I realized what a challenge it was to piece and quilt a top with everything else I was doing -- or perhaps it was the challenge of finding a pattern to use with the orange and yellow shelf? 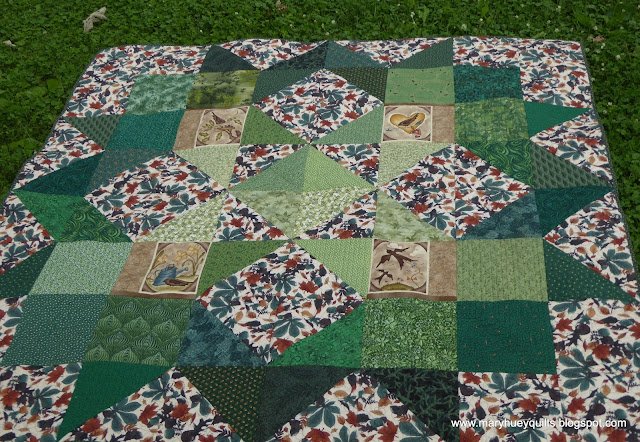 There is just a few more hours of 2015 left and I've been spending quiet time in my studio -- tidying up and reviewing what I accomplished over the past year, so I feel ready to set some (realistic) goals for 2016.
First, I'll try to finish a UFQ each month!  I haven't decided if I'll carry over the balance from 2015 -- I learned just how important a purpose and a deadline are for me to get an old project finished so my plan is to chose 12 that have a destiny in 2016!! 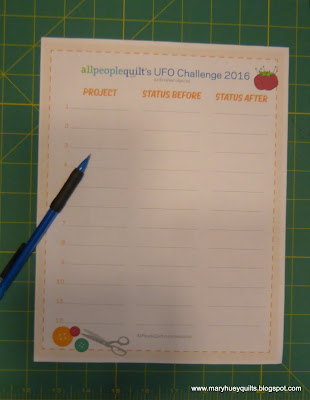 Second, I'm going to try to generate four new twin size scrappy charity quilts -- one every three months -- I came so close to doing this in 2015 I feel certain that I can accomplish this one!!
Third, I want to get the last half dozen sets of quilt blocks malingering in boxes and baskets pieced into quilt tops so they don't go astray when they clear out my studio in the distant future!!
And finally, I want to continue to explore piecing designs and offer workshops where quilters can apply the Set-In Piecing Simplified technique featured in my DVD.  That will actually be the easiest goal to accomplish because I'm very easily distracted from everything by an interesting quilt block with y-seams!!
So how about you?  Are you setting stitching goals?  You should!!
The most exciting discoveries I've made as a quilt maker over the past few years are almost all the results of goals I've set -- achieved and unachieved.
If you want some more inspiration for goal setting -- head on over to the 2016 Planning Linky Party at Quilt Jetgirl by clicking HERE!!