The Other Christmas Quilt

I actually gave a new quilt to six of my closest people this year -- some sort of record for me!!  One was finished early in 2014, four were quilt tops that needed quilting and this one was just cut out at the beginning of October when I set my finishing goals!
(read all about that here)
This is the quilt that was cut out -- a Tessellating Windmill for my grandson.  I cut it using Marti Michell's terrific tool and a layer cake -- it was a cutting demo during a quilt show in 2013?  I had purchased the fabric for the border and the binding so once the top was together (a couple days!!), it was time to think about the backing!! 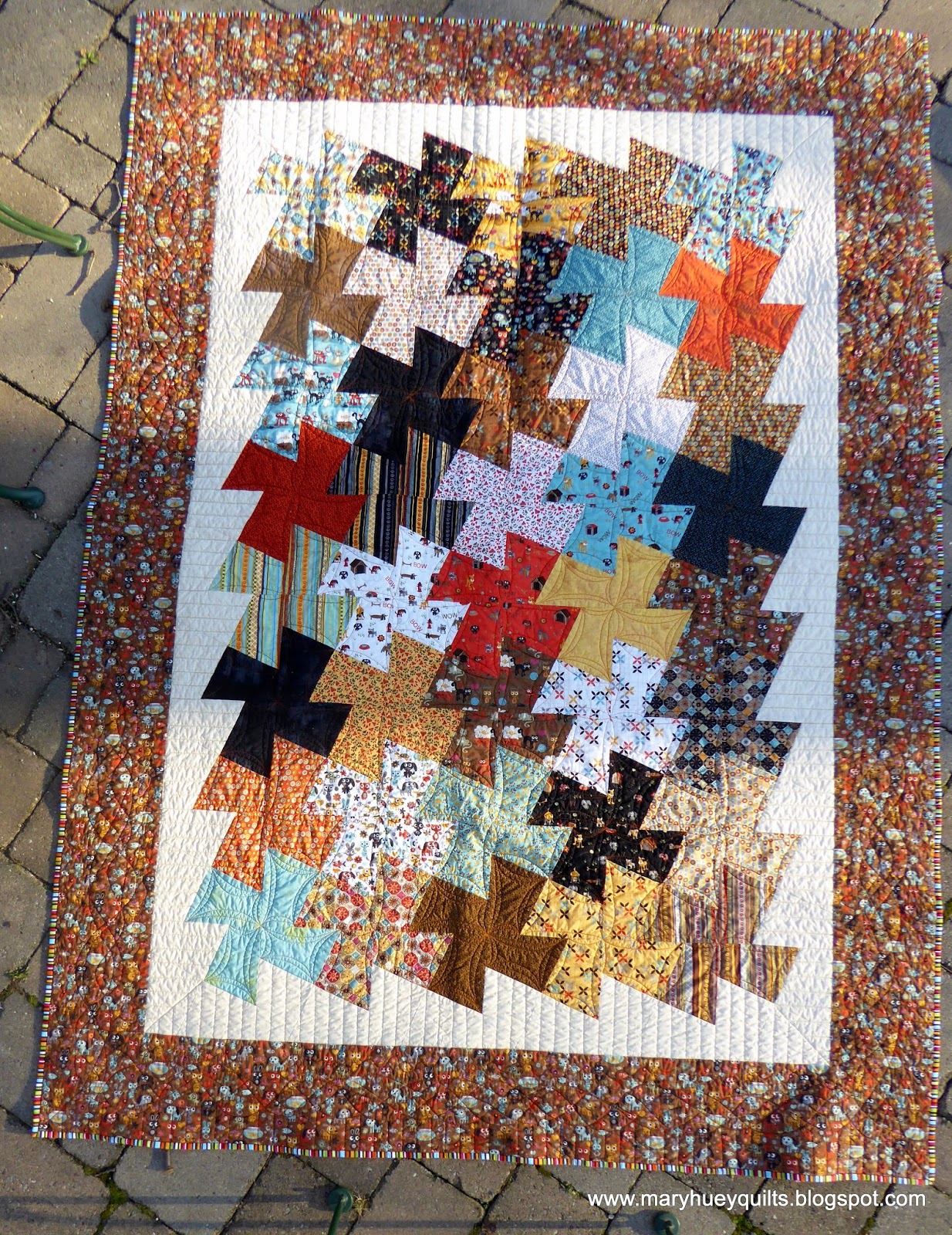 One of the side effects of working almost exclusively out of my stash these days is that the BIG pieces of fabric are disappearing so pieced backings are becoming the norm for me.  I thought you might enjoy seeing the process I use to create one of these.
It begins with a little math.  I have divided the width I need to achieve by 4 and plan to make four panels approximately 18" wide. 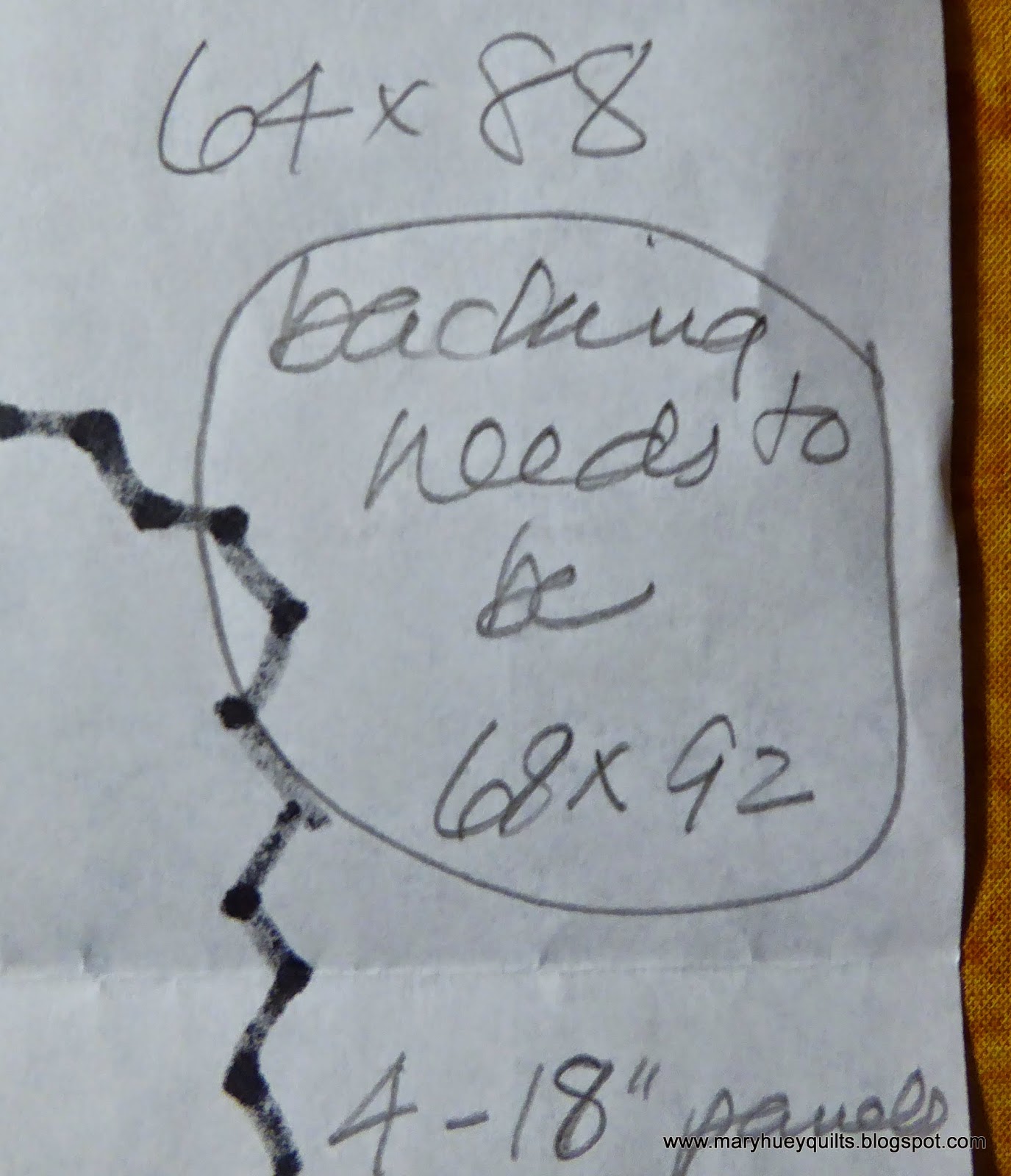 After deciding gold/yellow would be a good choice for the backing (won't show the dirt), I pulled that stack (okay, two stacks) off the shelves and pulled out all the ugly ones.  Well, maybe they aren't ugly, but they are pieces I've owned for quite a while and have hardly or never used.  They want to be used!!
Once I have a pile, I press all of them and sort them into four groups -- each group will give me about 92" in length which is my target. 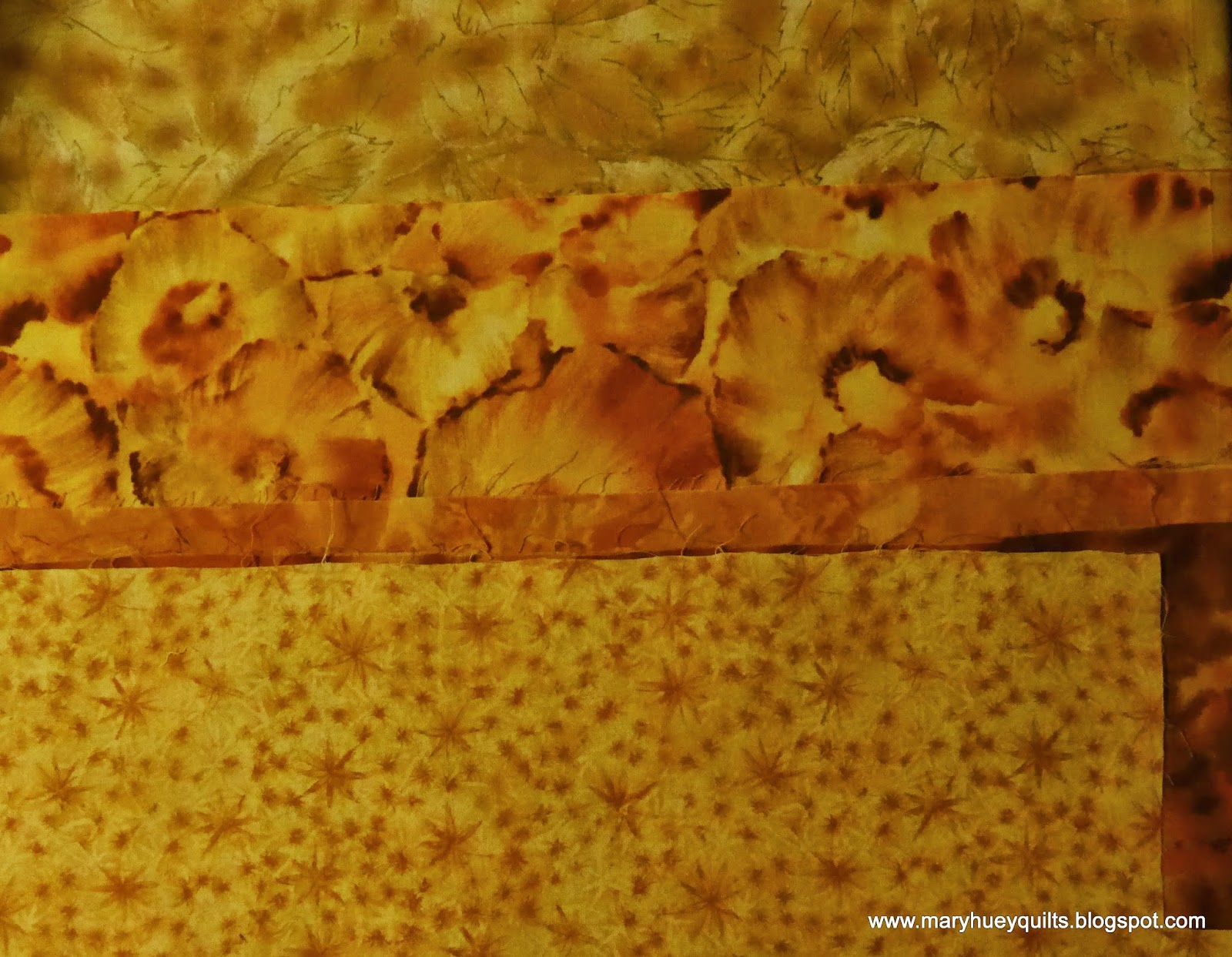 Here is a stack of six pieces for one panel ready to trim to the same width.  It's easier to do this before stitching the pieces together -- to trim a 92" long panel straight is challenging!! 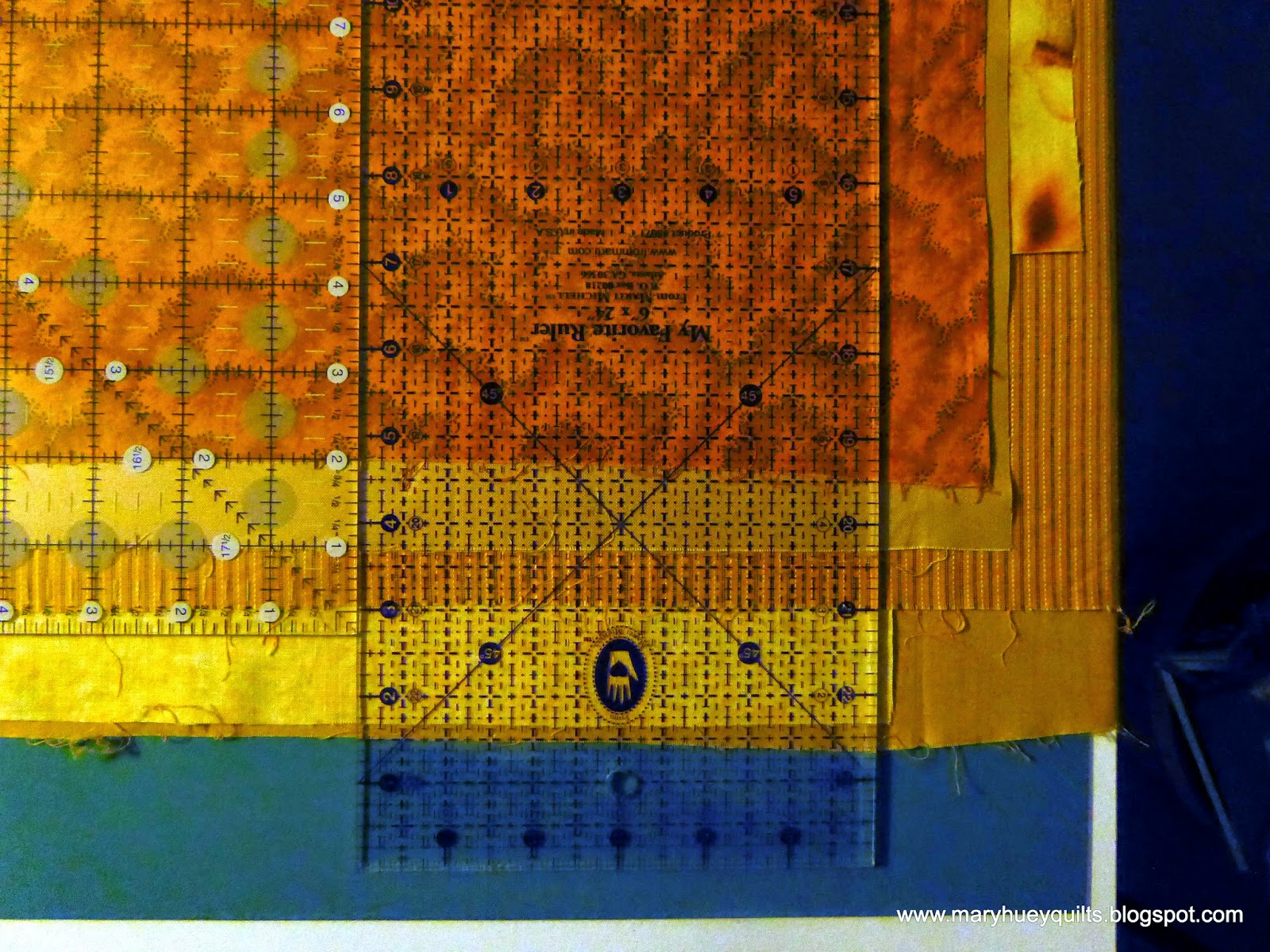 In a short time, I have four stacks of fabric ready to piece together into four panels for my backing.  The leftovers are folded back up and returned to the shelf. 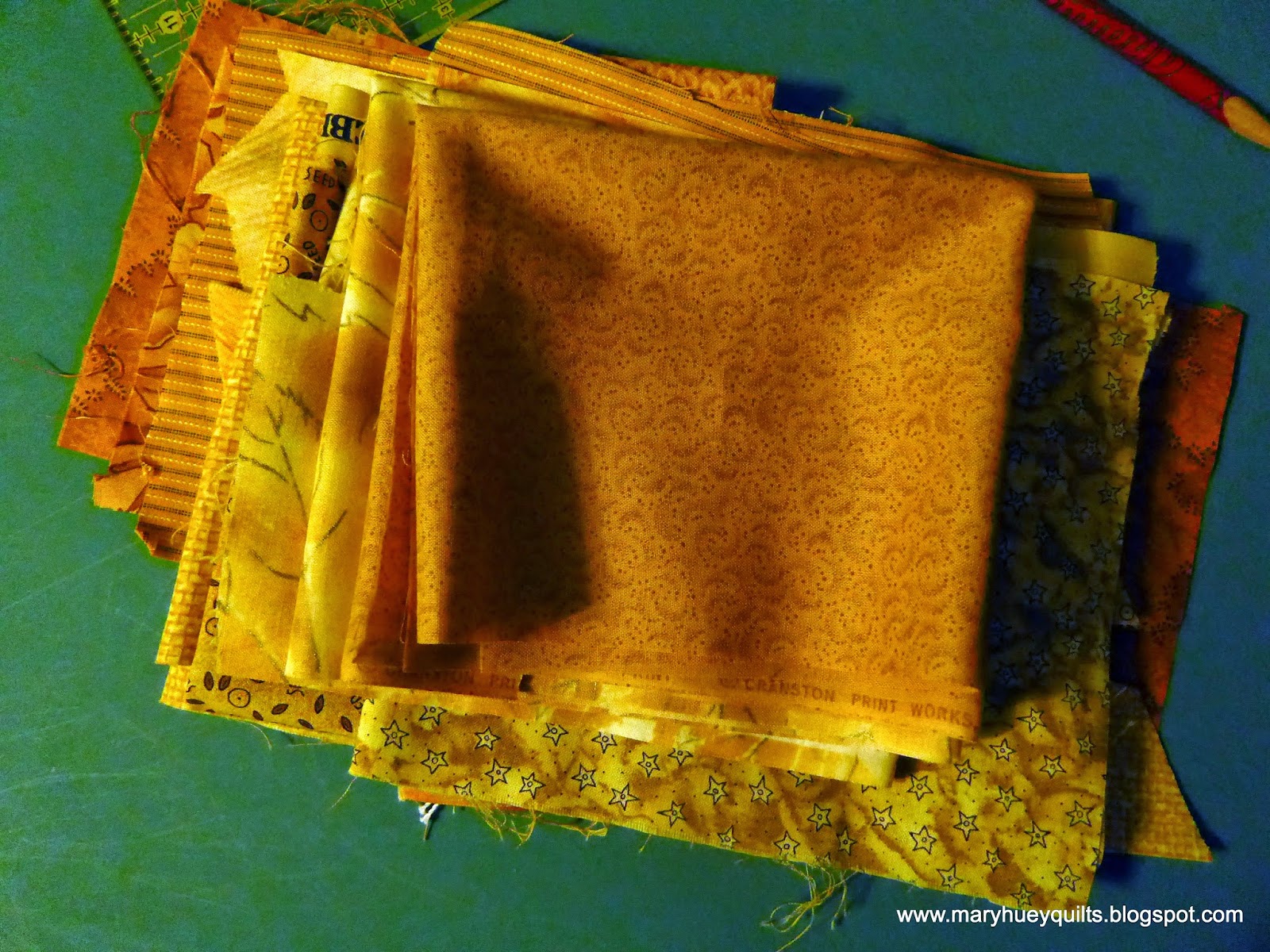 And the hungry wastebasket is satisfied for the day! 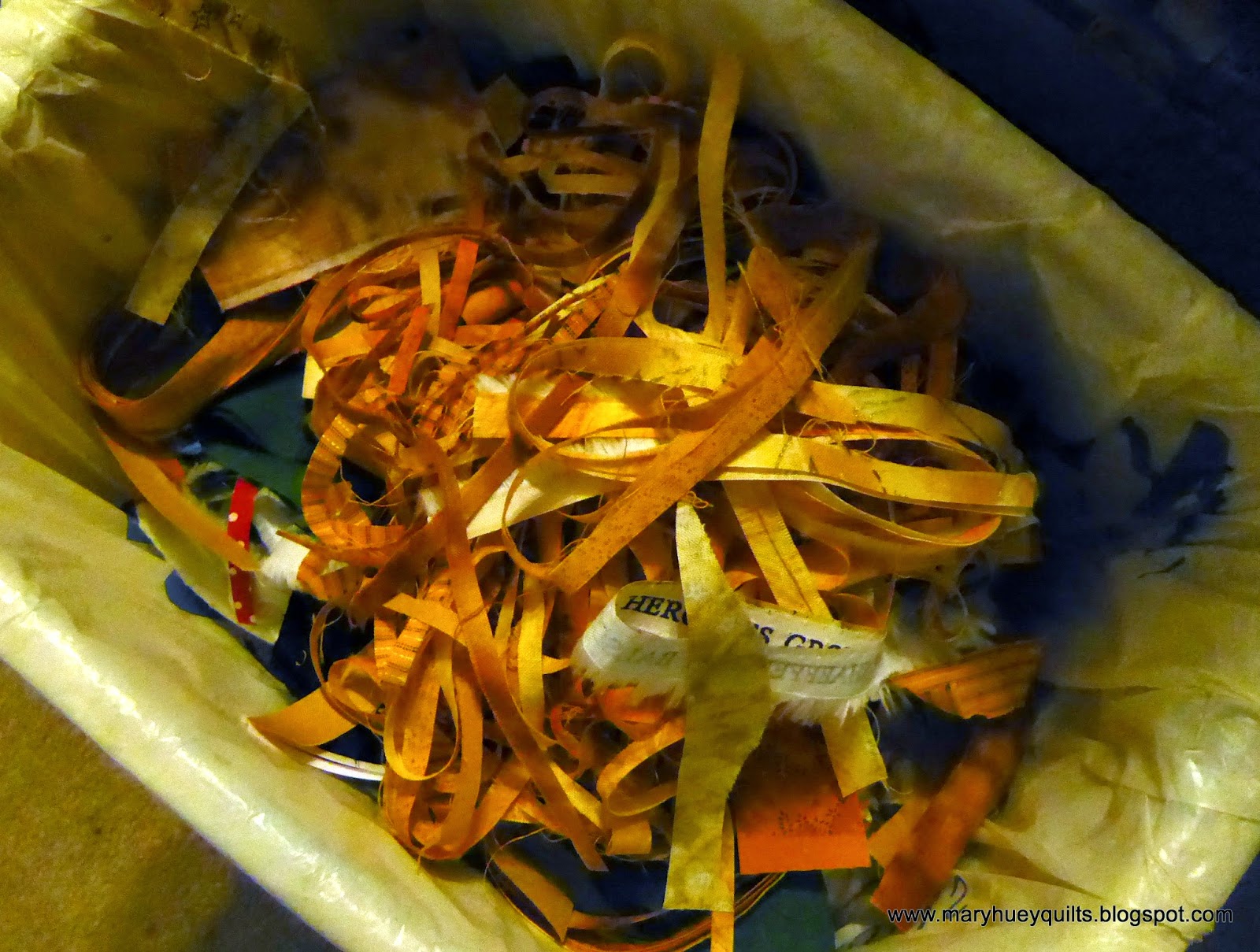 By the end of the afternoon, I had a backing ready to go.  The panels aren't all 18" -- some are wider, some narrower -- it's what worked.  The lengthwise grain of all the pieces runs on the length of the backing so they will behave similarly when I quilt.
Would it be easier to buy a backing?  Perhaps, but I already own this fabric -- so no new outlay of cash.  It reduced my stash by 4 1/2 yards (always good).  Now I have space and cash to buy some fun new yardage next time I'm out shopping. 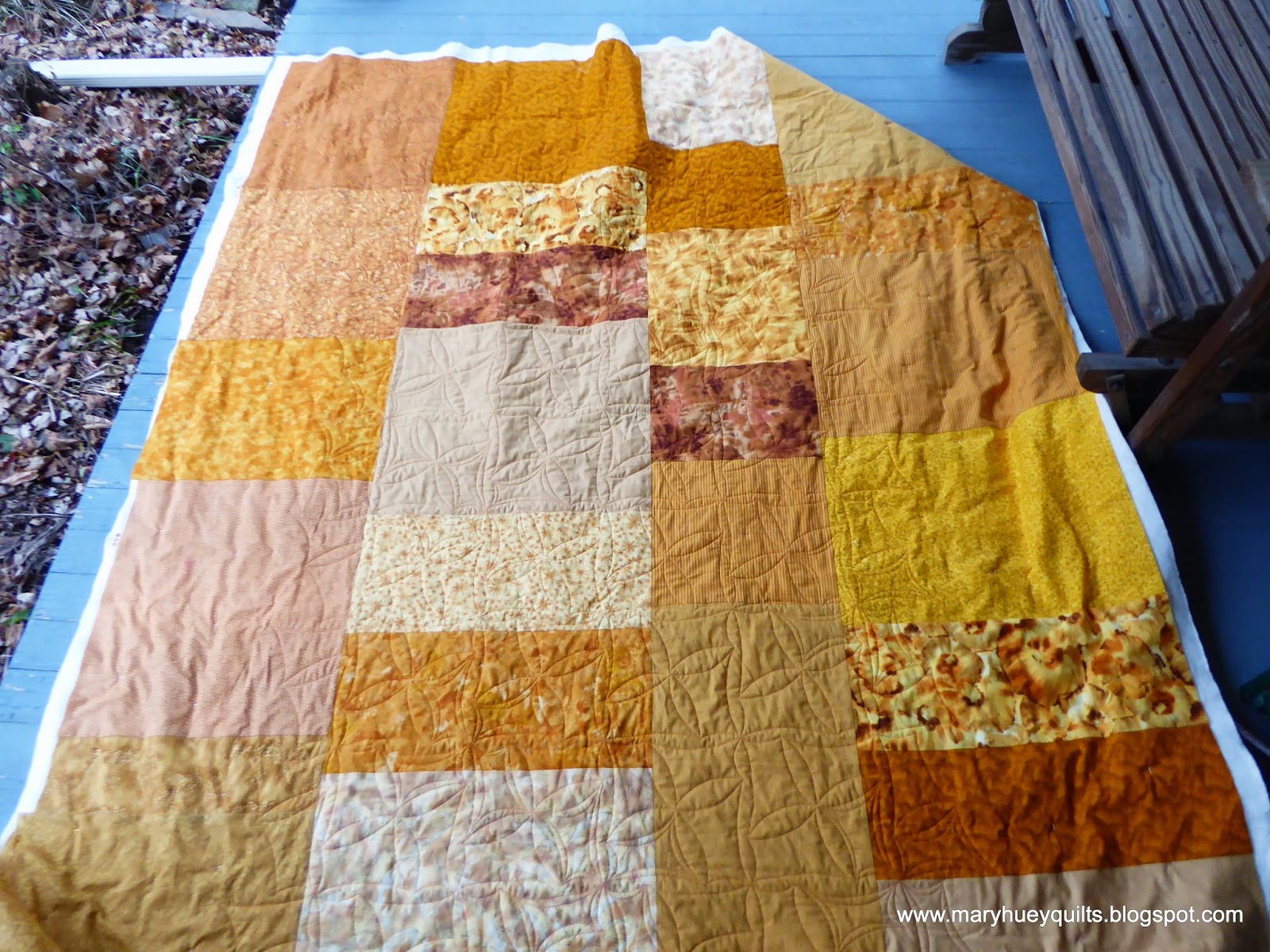 I used the same backing strategy on his dad's lap quilt -- panels went across the quilt and there went another 3 1/2 yards of fabric.  I'm not sure which gives me a bigger thrill -- finishing a quilt or using up a lump of stuff out of my stash?!? 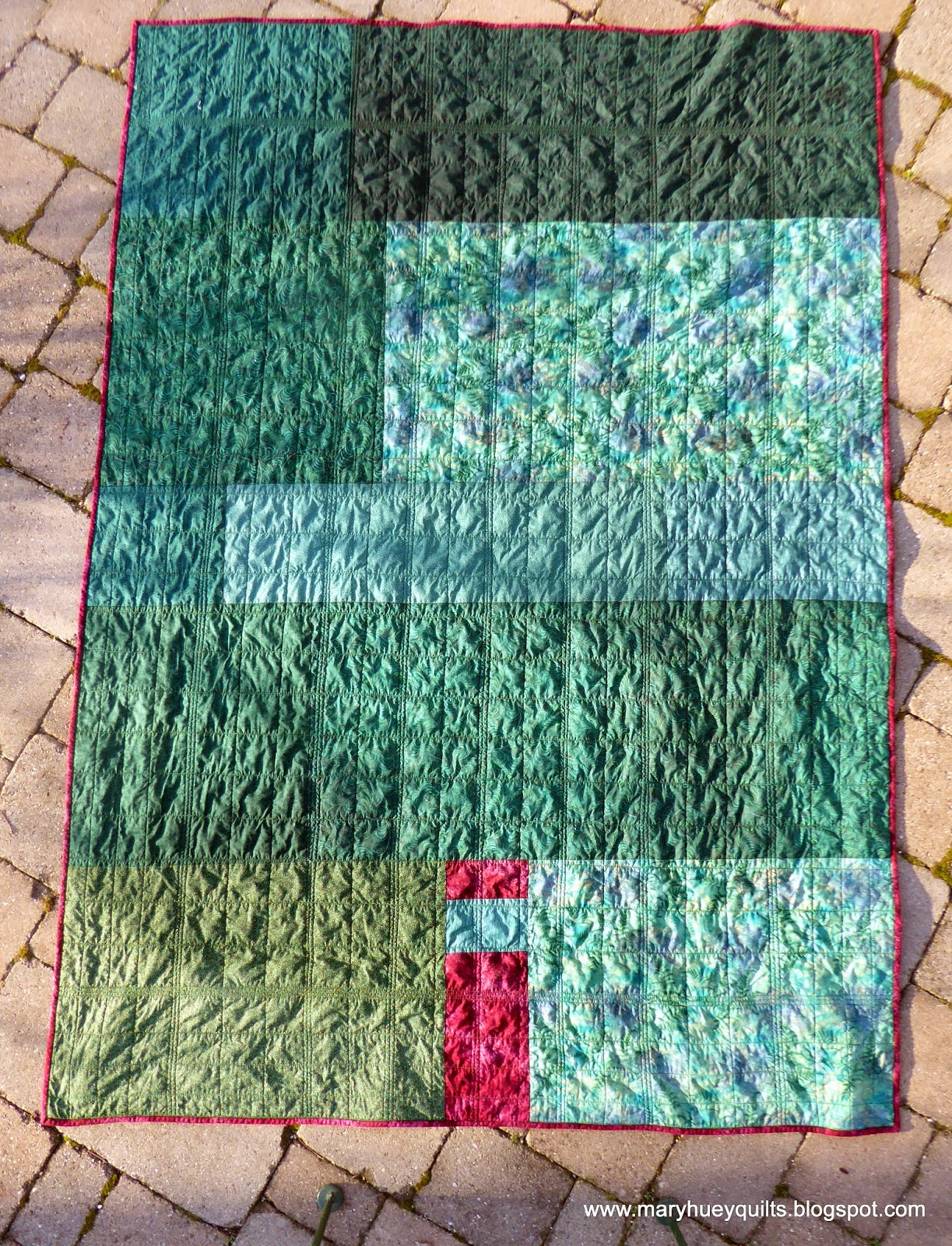 And what a rush to finish 5 quilts over the past three months -- it feels like a personal record!! 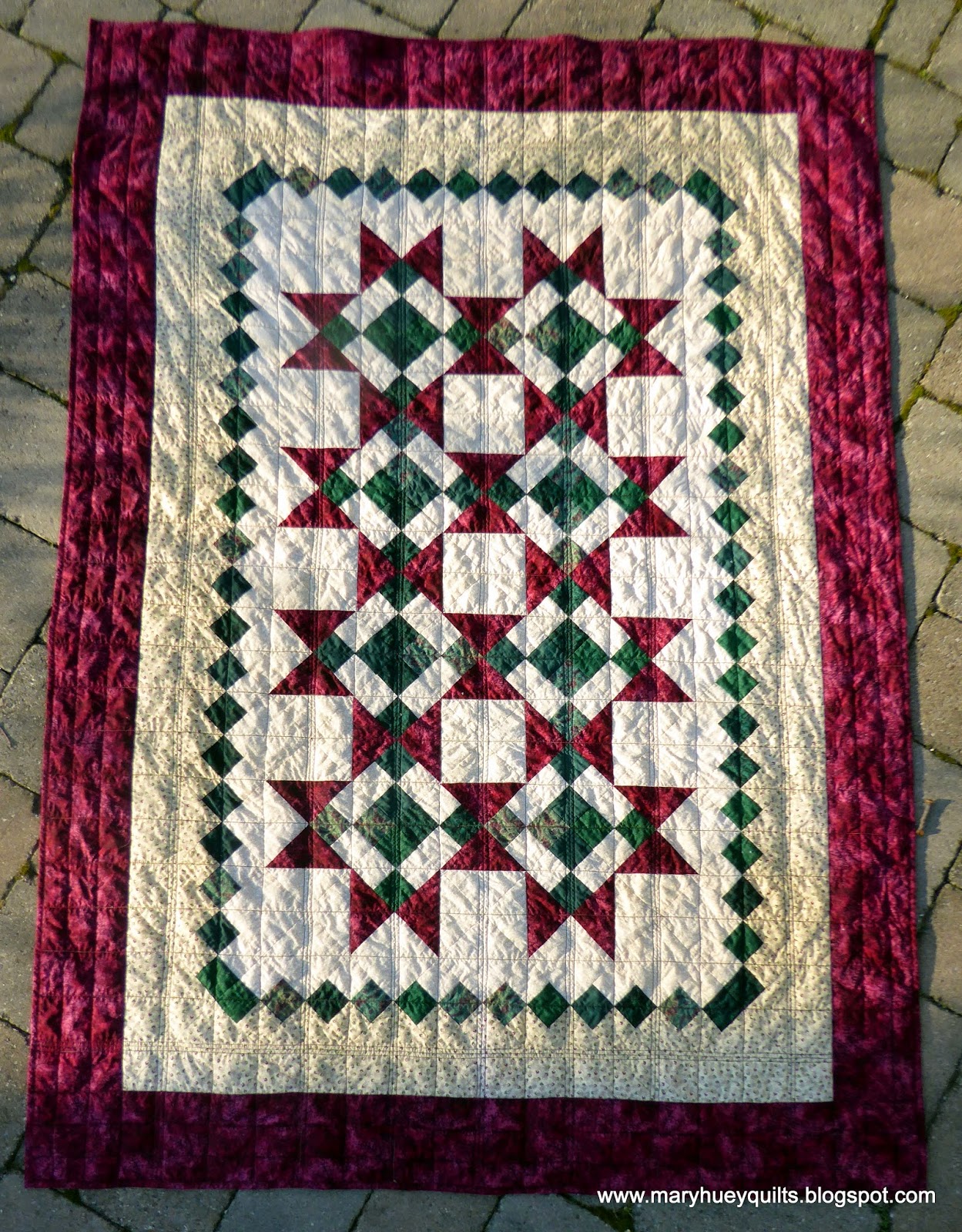 My list of "tops ready to quilt" is down to thirty (from 45 at the beginning of the year) and I'm feeling very encouraged about moving through those piles in 2015.  It would be so exciting to only have a dozen quilt tops on that shelf at the end of the year!!!
With that said, my goal for today is to layer up a quilt!!
What are you doing to get 2015 off to an energetic start?
Linking up over at The Littlest Thistle 2014 Finish Along to celebrate with all the others!!
Mary Huey
www.maryhueyquilts.com