My oldest daughter and housemate has been on vacation this week and we decided to go visit a park in Summit County (Ohio) that we have been hearing about over the past year.  Bobwhite Quail (which were common in central Ohio were wiped out during some harsh winters in the late 70's) have been introduced to this park and are reported to be having some success getting established. 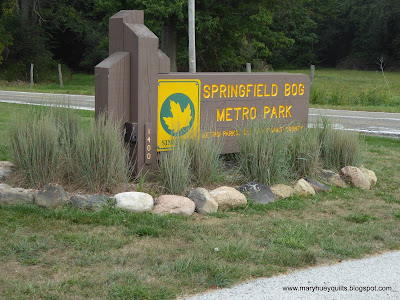 I'd been told not to expect to see the quail at this time of year (a bit late in the season) but the prairie is thriving and we enjoyed our first visit to Springfield Bog (east of Akron, Ohio).  The park is over 250 acres with 1.8 mile grass trail around the perimeter of the prairie which is about 4 years old. 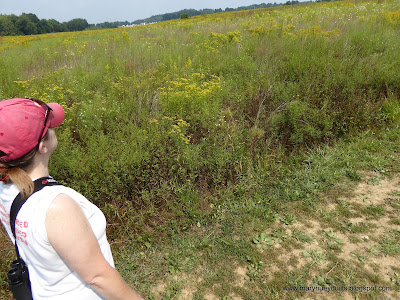 If you never visited a prairie park, it changes as the seasons progress and during early September, golden rod reigns supreme.  They are an interesting family of plants and I've read there are 22 species in Ohio.  This is common goldenrod and was the most abundant.  It was the first time all summer I've seen such an abundance of honey bees any place. 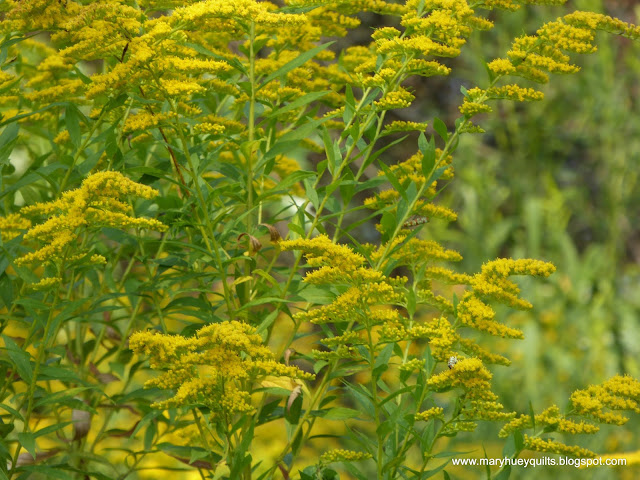 We both enjoy birding and goldfinches were everywhere but they competed unsuccessfully for our attention with the butterflies and insects.  This is another goldenrod, one of my favorites called stiff goldenrod. 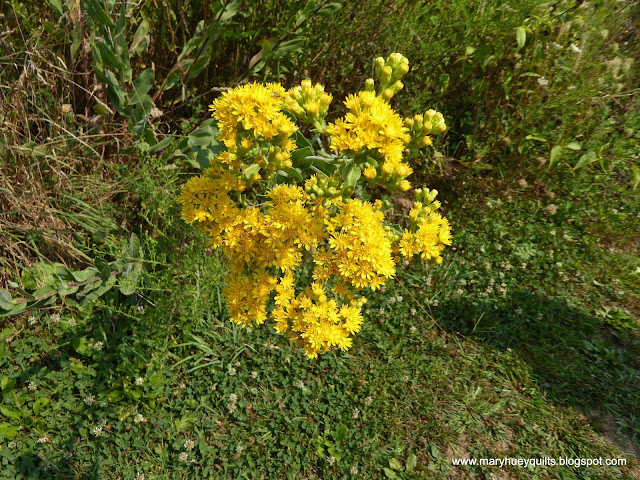 I lost track of how many monarch butterflies we saw but it was well over 20 and this butterfly which is a monarch look-alike, the viceroy.  We saw at least six of them and at one point, two of them appeared to be playing leapfrog -- flying over and under one another in circles. 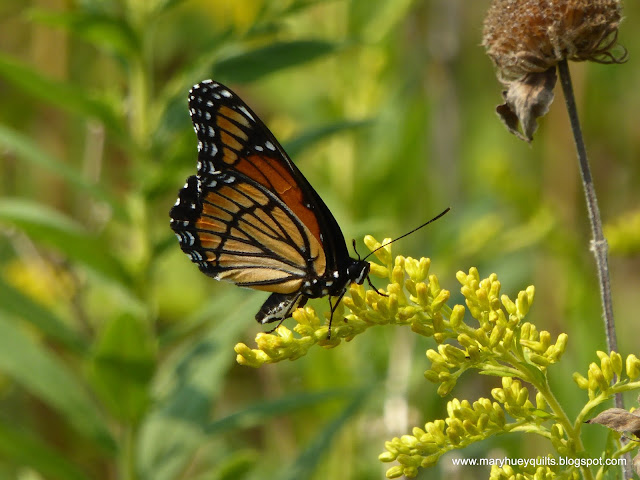 The New England asters were beginning to bloom -- the red-violet ones seem to come first followed by purple ones in a week or so. 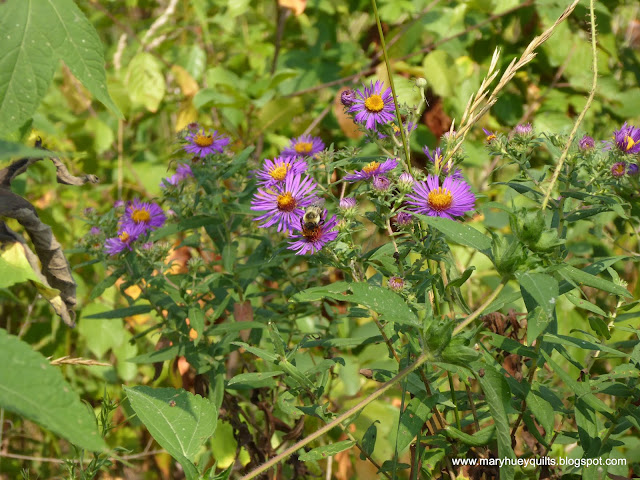 A smaller pale one was less common but quite pretty -- unfortunately, I didn't investigate the finer points of foliage, etc to be able to give it a name.  This is a link to a blogger who discusses wild Ohio asters in some depth -- you may not care, but now that I've found it, I want to be able to find it again!! Asters are an important source of nectar for butterflies and other insects during September and October. 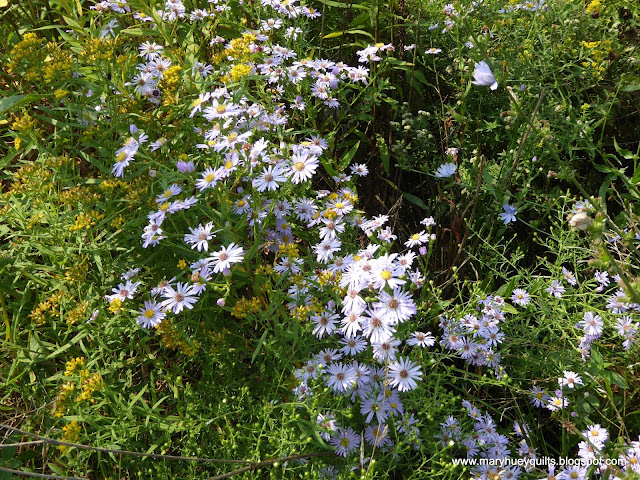 The Canada thistle which tends to overwhelm fields left to go wild wasn't present, but this larger one was just beginning to bloom and what a beauty!! 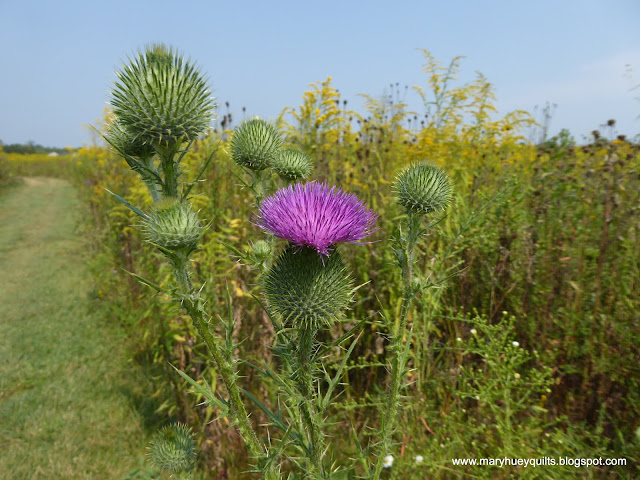 I'm slowly learning more about prairie grasses but the only one we saw that I feel confident to identify publically is turkey foot -- standing taller than me, it stood out among the surrounding vegetation. 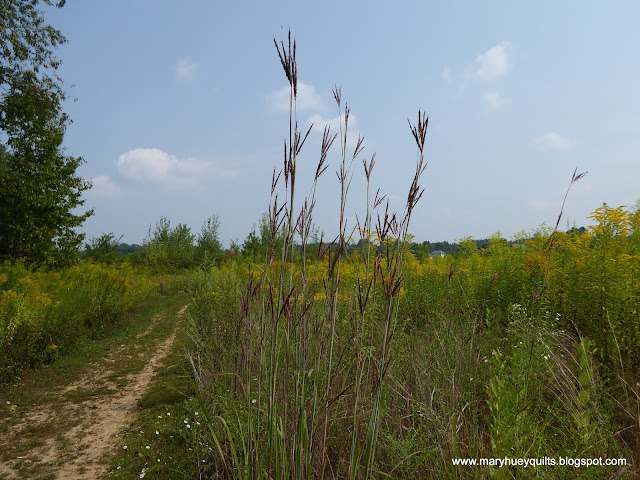 We spotted several clusters of pokeberry in fruit and I just love the color of the stems -- the nearly black berries have mostly been eaten off of this one. 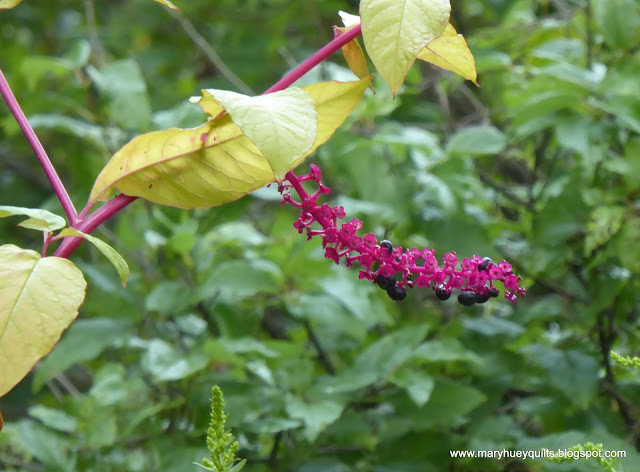 There were several stands of rattlesnake master -- those will increase as the prairie matures.  The flowers don't look much different than the prickly looking seed heads.﻿ 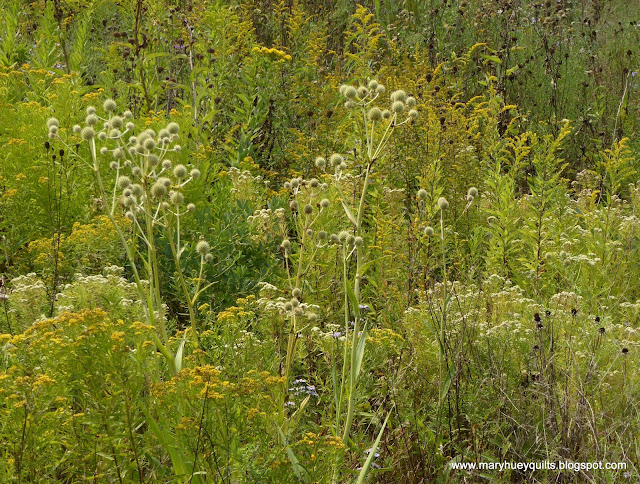 Besides an abundance of butterflies, there were more dragonflies than I could believe.  Everytime we put our binoculars up to look across the prairie at a flying bird, a half dozen dragonflies were in view hunting smaller flying insects over the blooming flowers.

A small pond in the center of the prairie attracted dozens of these delicate blue damselflies -- some hovering over the water, others courting and breeding on the cattail stems.   It took some patience to grab this picture of two forming this heart as part of the mating ritual. 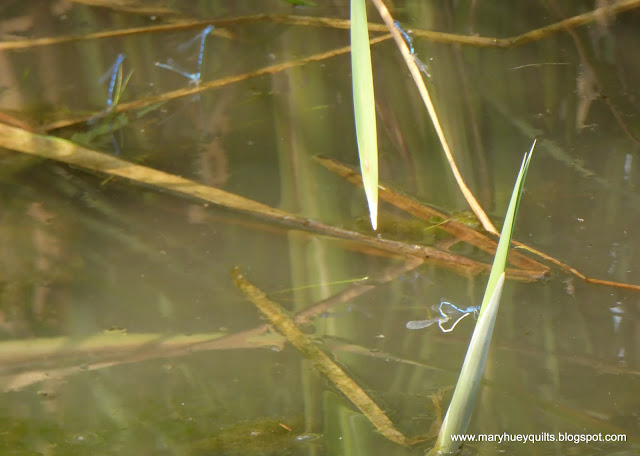 Not far away was this conga line of four more.  Since I was straining my camera's telephoto ability to get these pictures, they are a bit fuzzy. 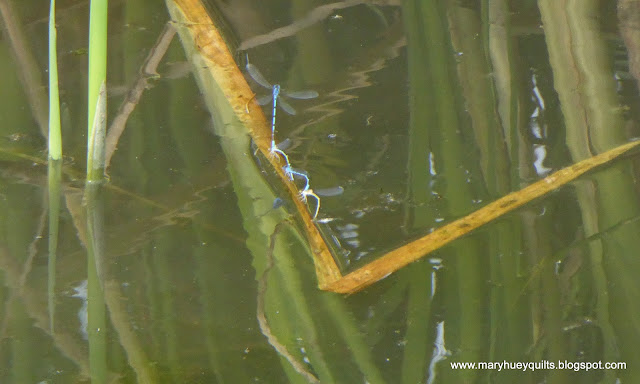 On the way home, we stopped for another walk at one of my favorite spots -- Tinkers Creek State Nature Preserve on Old Mill Rd. southwest of Aurora, Ohio.  It's a 750 acre complex of wetlands. 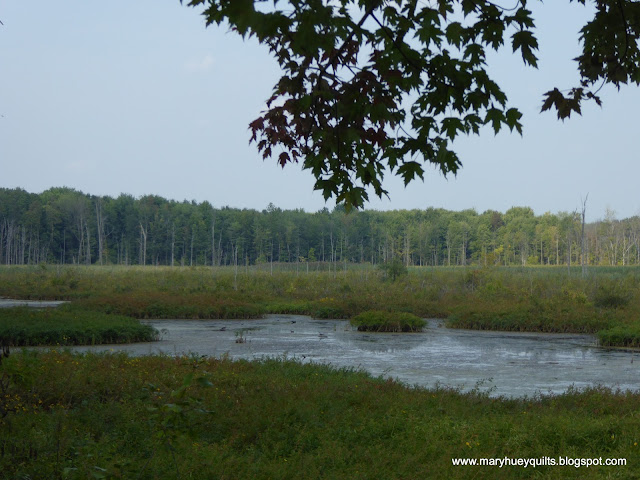 My main objective was to see the bottle gentians in bloom and they did not disappoint. 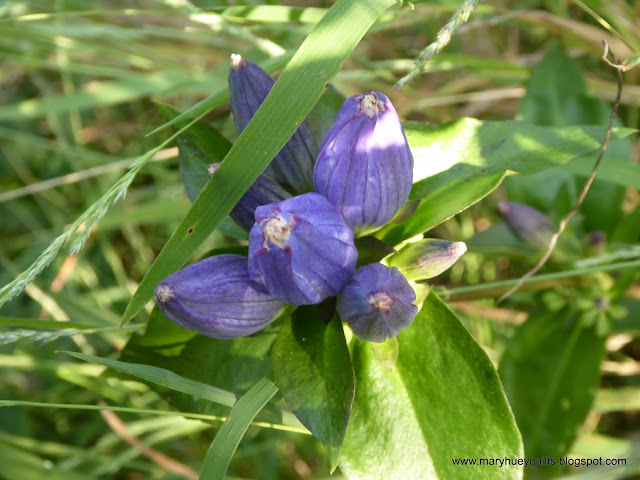 We also had the extra thrill of finding several of these little frogs -- Northern Leopards -- they were common when I was young (and catching frogs regularly) but I rarely see them anymore. 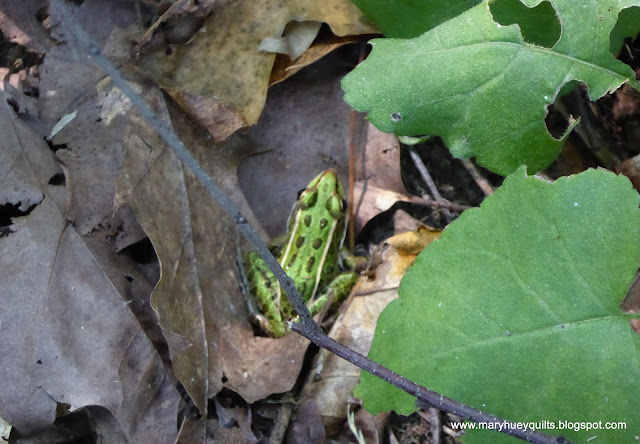 It was such a pleasant day -- very refreshing to be out walking and noticing and wondering. 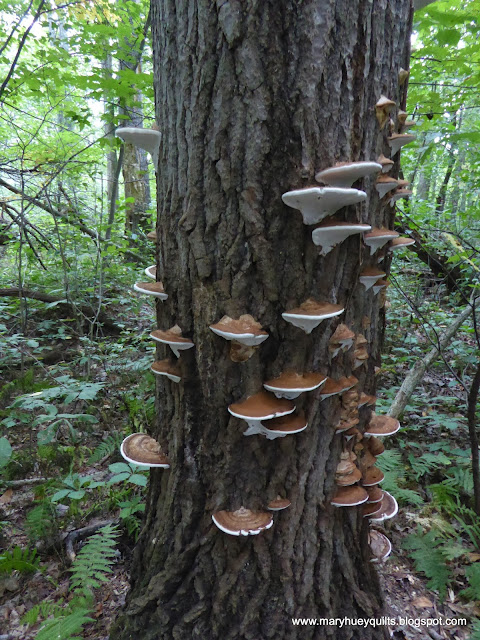 Tomorrow, it's back to quilting -- I'm making good progress on my daughter's applique quilt and perhaps I'll finish it this weekend -- only the final border to go before it's ready to bind!
Hope your weekend includes pleasant activities that will refresh you as we begin the month of September!!
Mary Huey