Joining a Round Robin!!

Have you ever participated in a "round robin"?  Over the years, I can think of a half-dozen that I've joined -- several that I ran while I had my quilt shop and several in my quilt guild.  A week ago, I took the plunge and joined a new one proposed by Bea at www.beaquilter.com.  I started following Bea last month for her EQ7 tutorials (growing my EQ skills!).

At the retreat I attended last week, a gal was piecing a quilt designed by Elizabeth Hartman from her book Modern Patchwork.  There were birds in the windows of each house block -- something with birds always gets my attention.  I came home and borrowed that book from the library thinking that her house block would be a perfect starter block for my round robin.

Last evening I headed up to the studio to pin Bea's e-mail with the round robin schedule on my bulletin board.  I intended to pull out my stack of "bird" fabric and start organizing a color scheme for the round robin.

The first thing that caught my eye (easily distracted) was this piece of fabric laying on the cutting table.  It arrived in the mail last week and hasn't been put away (can you imagine that) ?! Love the simplified bugs, love the size of them and love the color scheme!! 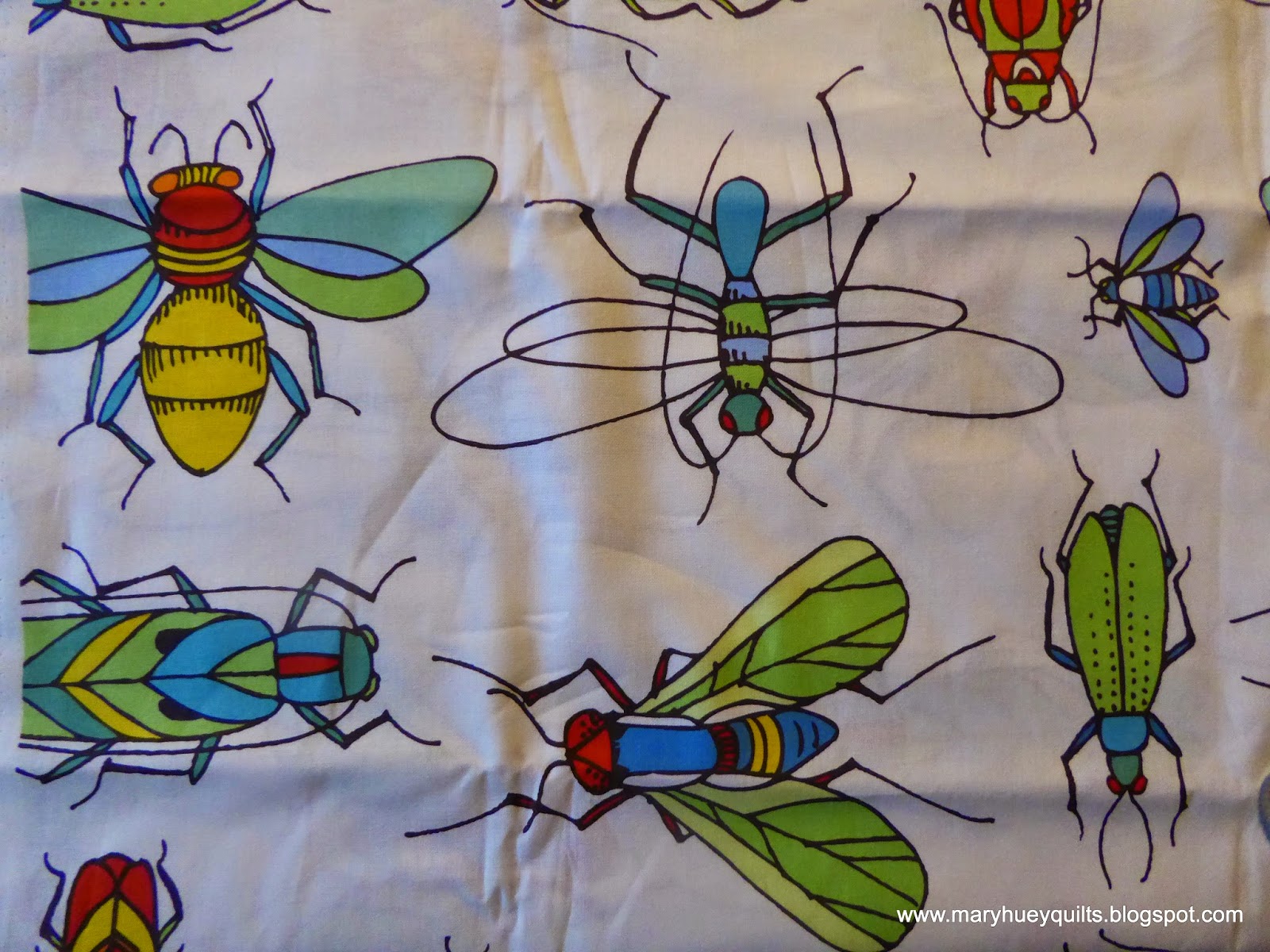 So I'm thinking about a house block for the center of my quilt, this wonderful bug fabric is in my face, and Elizabeth's house blocks are inspiring me.  Have you read anything about "insect" houses/ hotels/huts that are becoming popular with gardeners?
Take a little break here, go to Pinterest and search for "insect hotel".   You'll quickly understand my block!  Not only are these little structures good for the insects, they are charming additions to a garden!
I'm inspired (or perhaps I've had too much caffeine today) and so I sketched out a rough block idea. 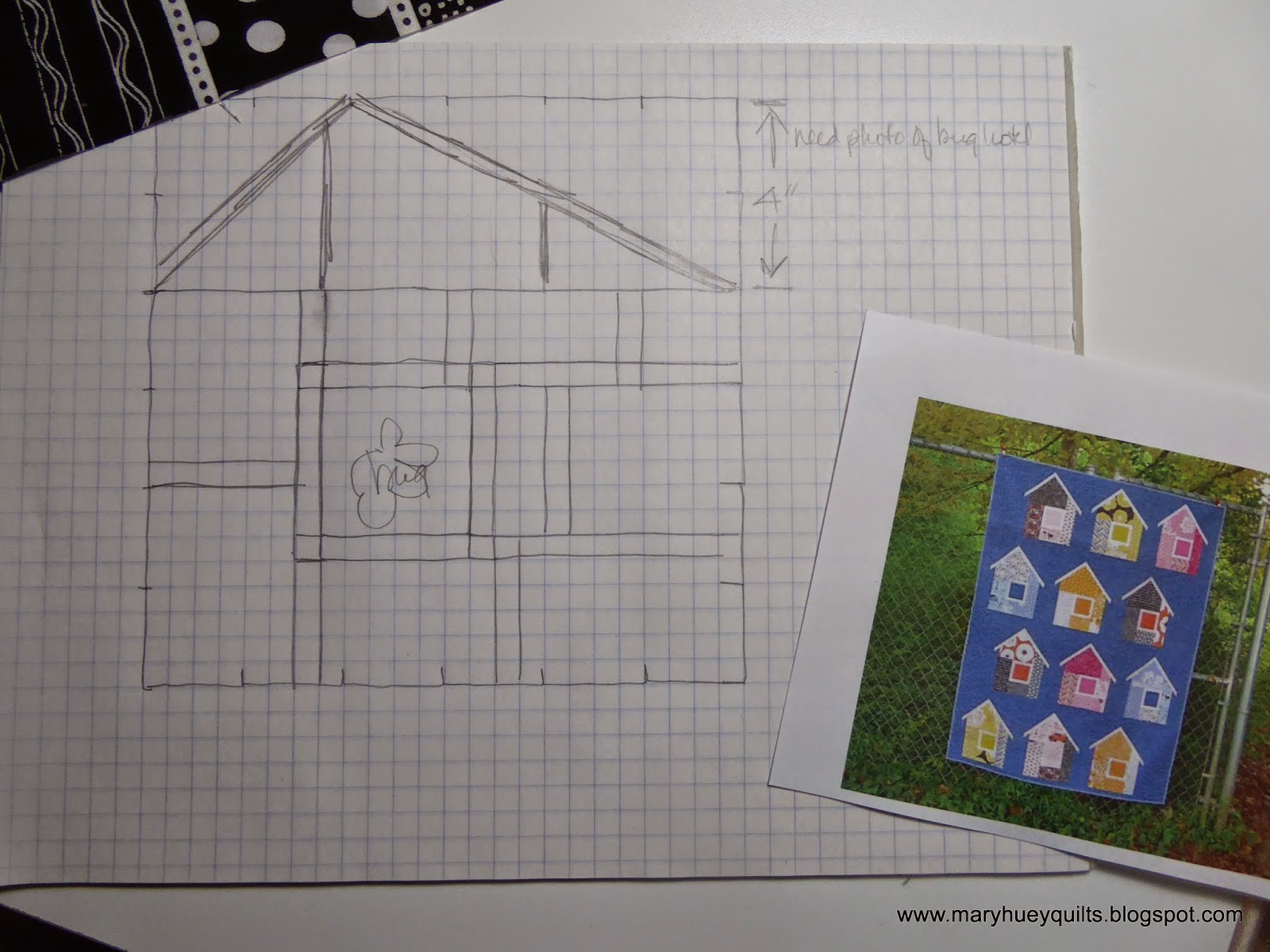 Then I head over to my stack of "landscape" fabric thinking it will be a perfect stack to pull some textured pieces for my "bug hut" -- but it's all beige and brown and green -- doesn't really do anything for the bug fabric. 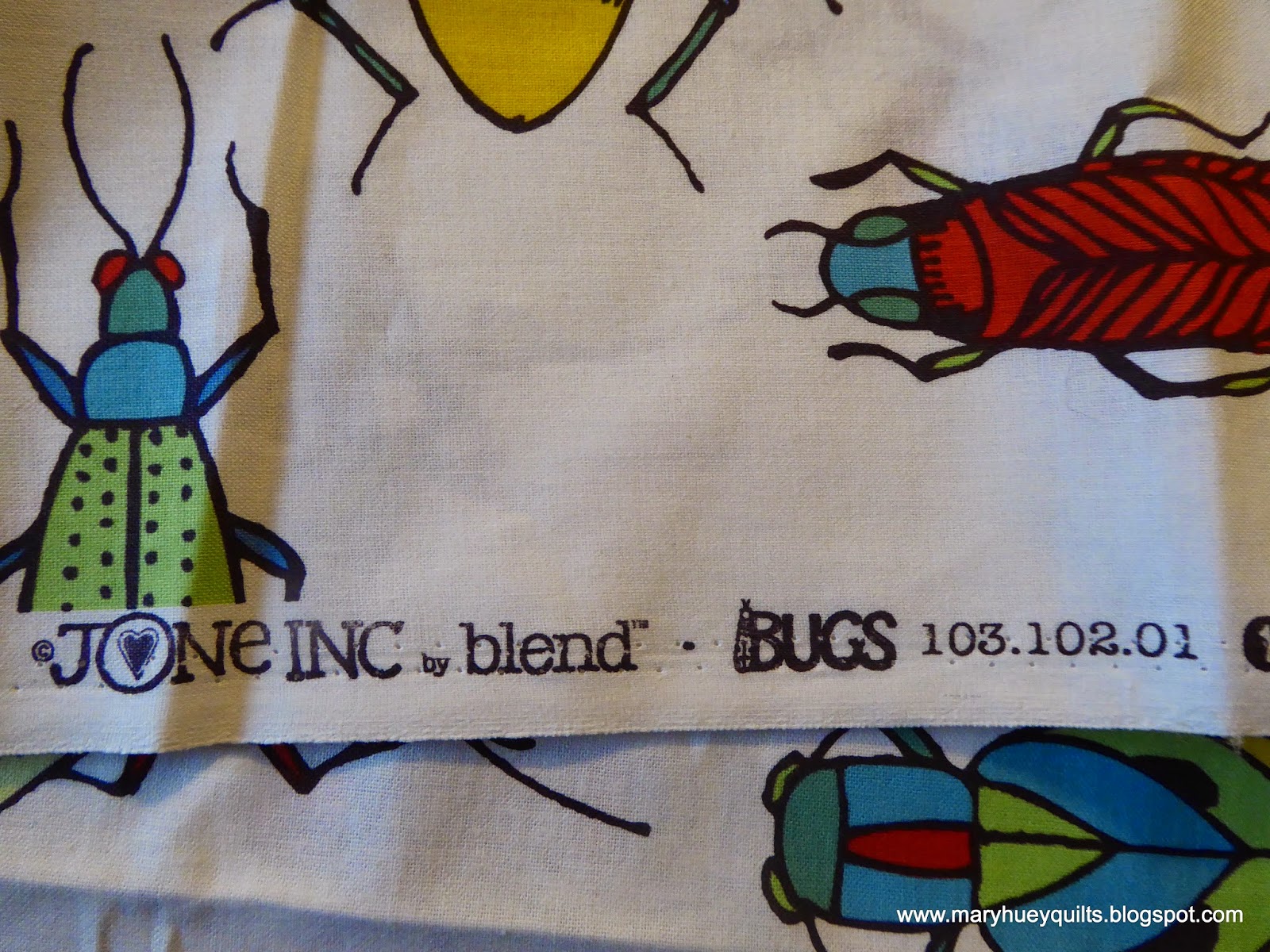 Black and white!?!  Not sure where that inspiration came from but it worked because there in that stack were quite a few pieces that reminded me of some of the visual "texture" that makes the insect hotels so appealing to me.  What do you think? 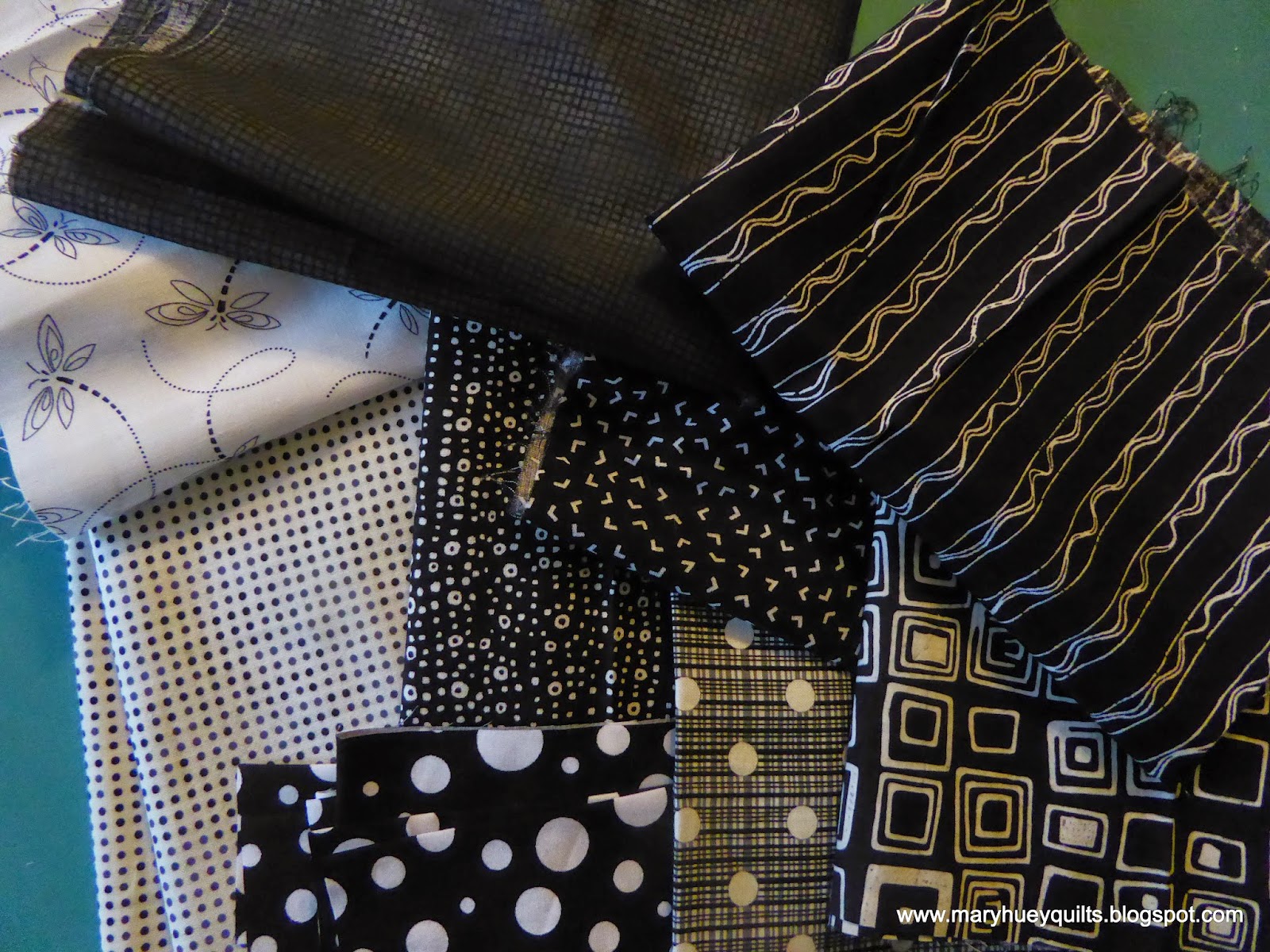 The white with the dragonflies will make a perfect "sky" and the white with the grid of black dots can be the dividers.  This is going to be great!  And this was as far as I intended to go since it was getting late.  But I decided to just cut out the "bug" that would be occupying the block and then just frame it up and soon I was lost to the idea of going to bed.
He was suppose to be a square and then I was inspired to make him a hexagon (though somehow, I've achieved seven sides?). 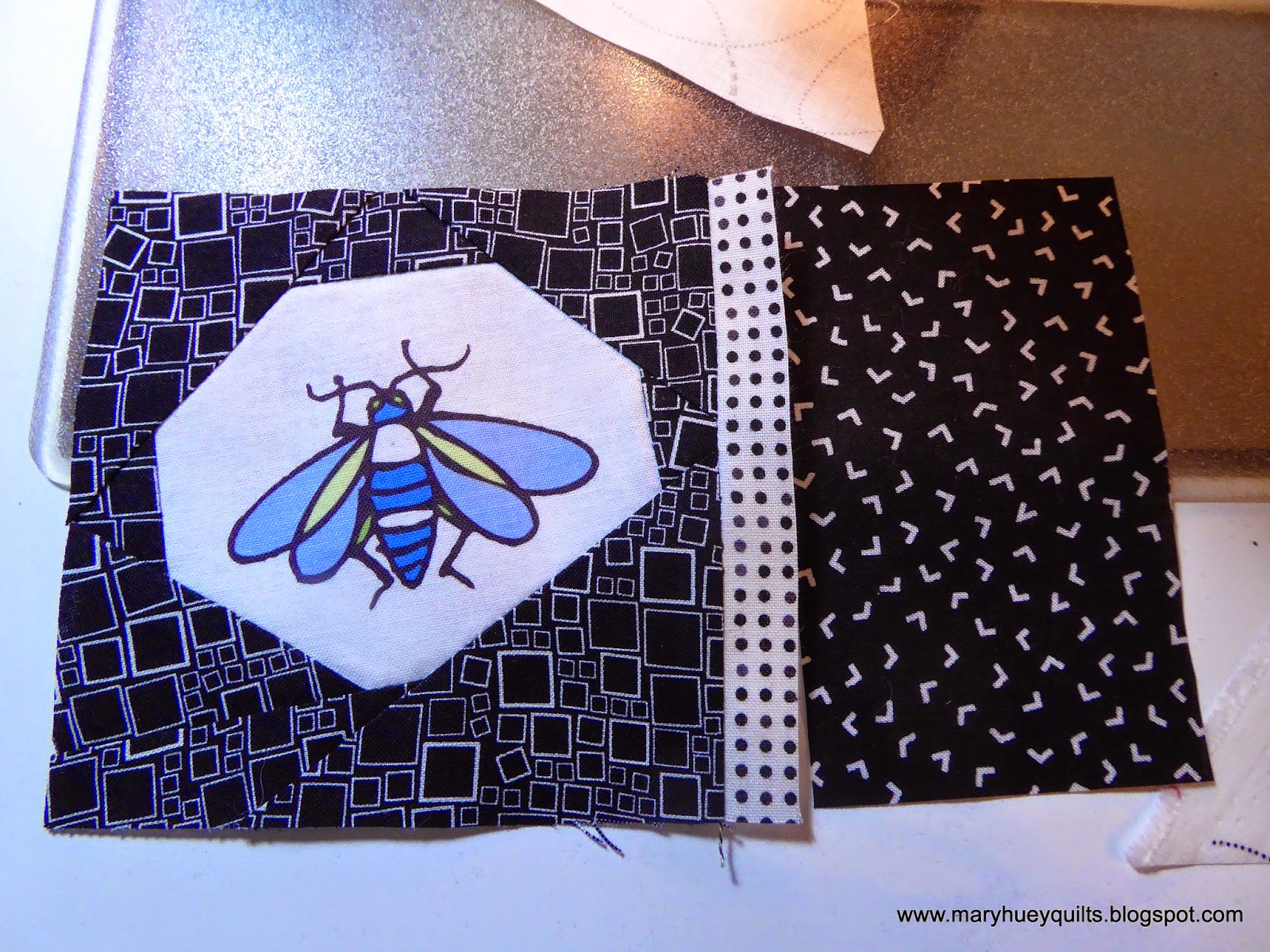 The narrow divider strips are 3/4" cut and when I stitch the second seam of these, I measure the 1/4" seam allowance from the first line of stitching rather than the raw edge.  So I'm watching the left edge of my presser foot rather the right side -- this gives me a uniform skinny piece. 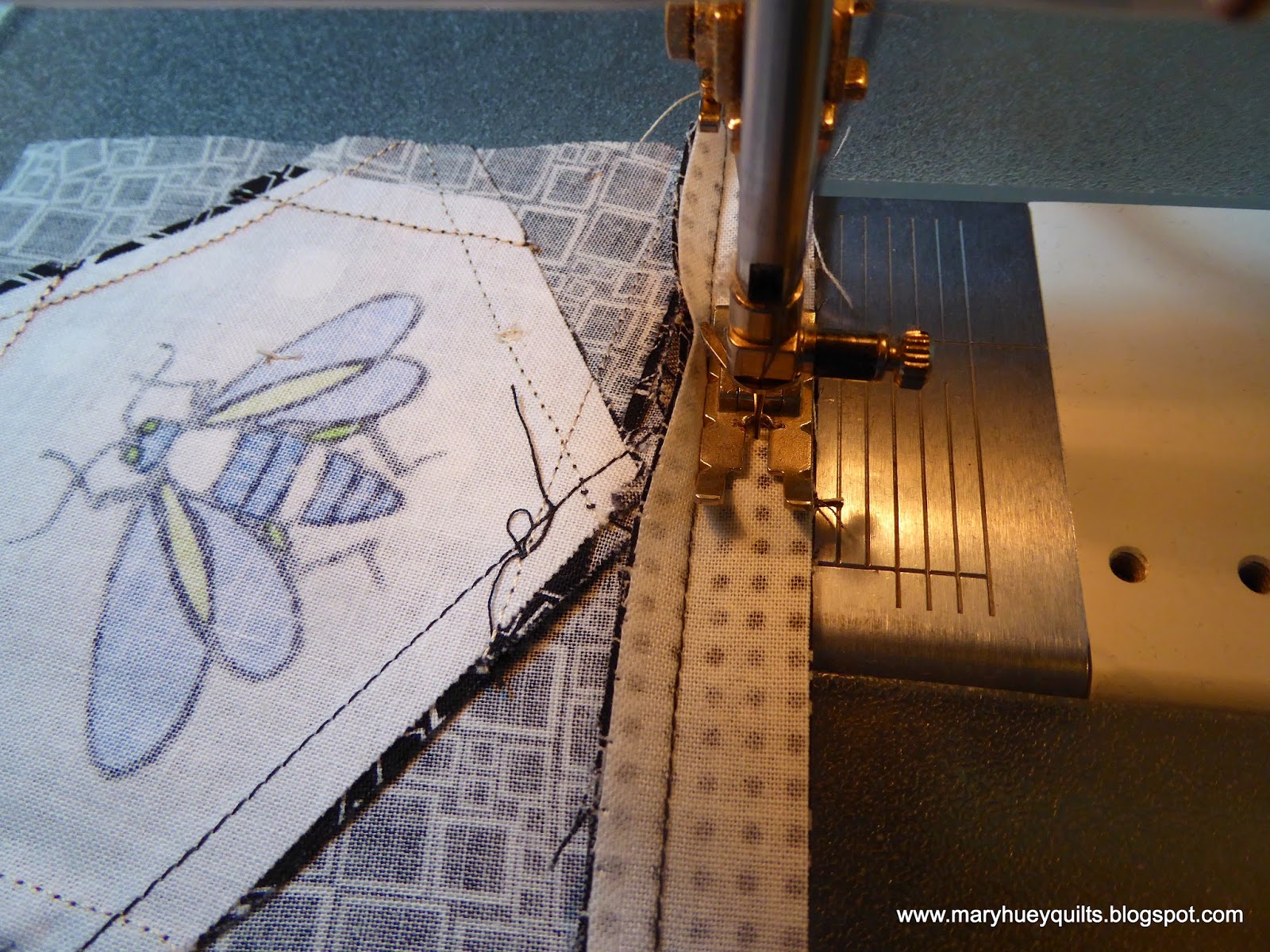 Here's how I cut the pieces for the roof unit.  I cut a 4" by 13" rectangle of the black and then trimmed the right and left angles -- just laid the ruler down and cut -- no measuring.  Then I laid the roof piece on a large rectangle of the sky fabric. 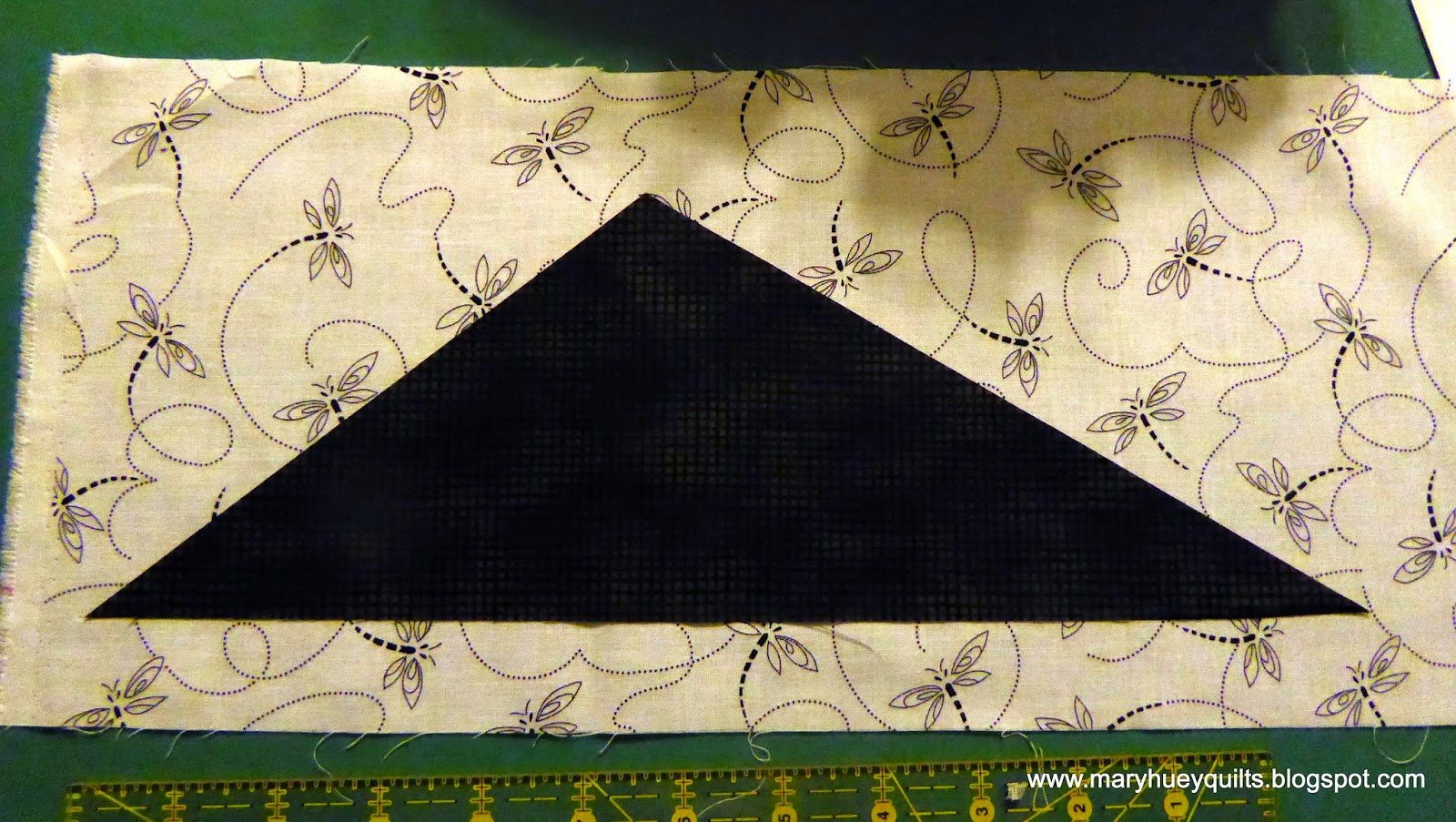 I positioned the edge of my ruler parallel to the upper left side of the roof and about 1/4" away and cut off a triangle of the sky fabric. 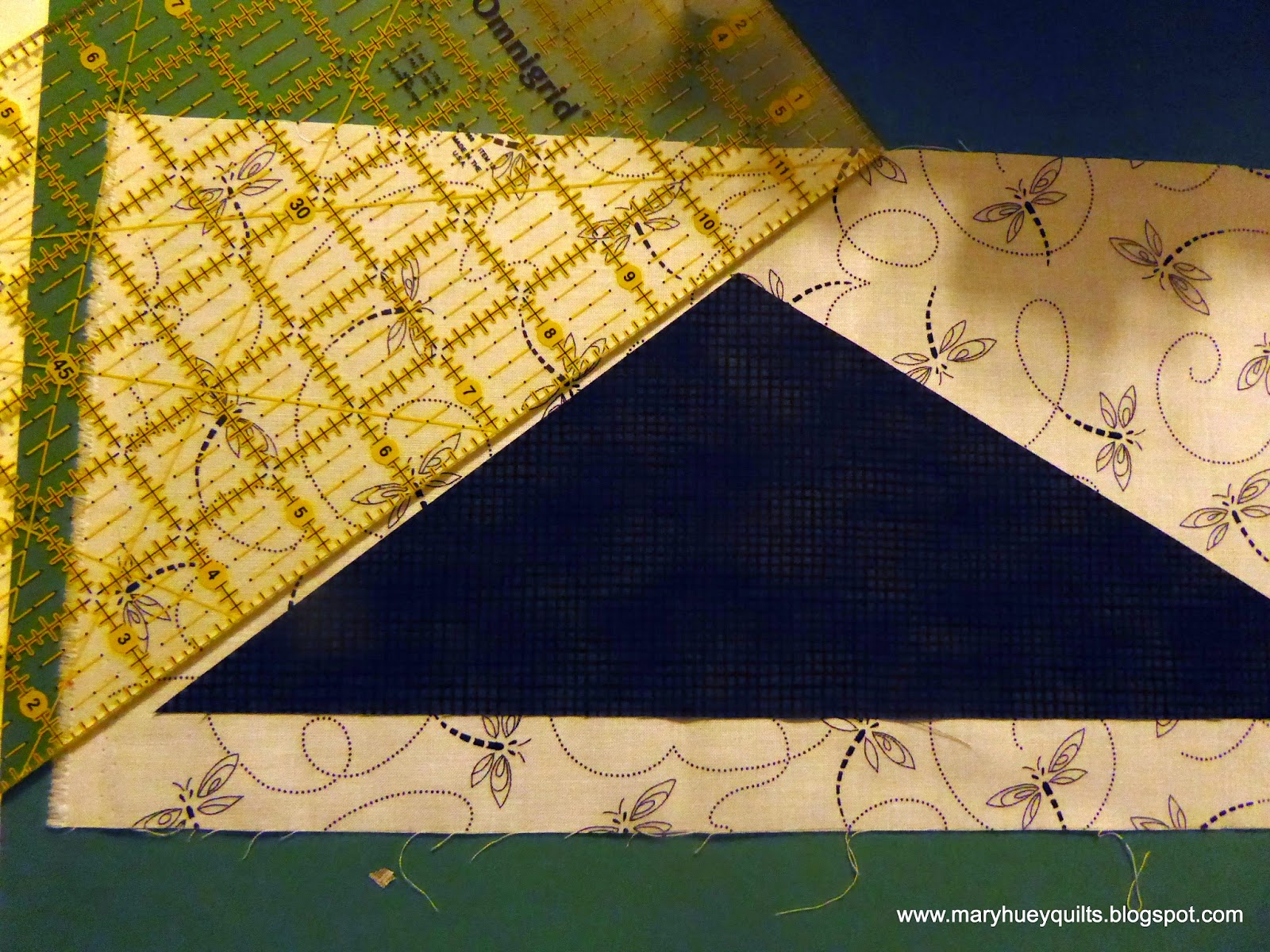 I repeated that on the right side. 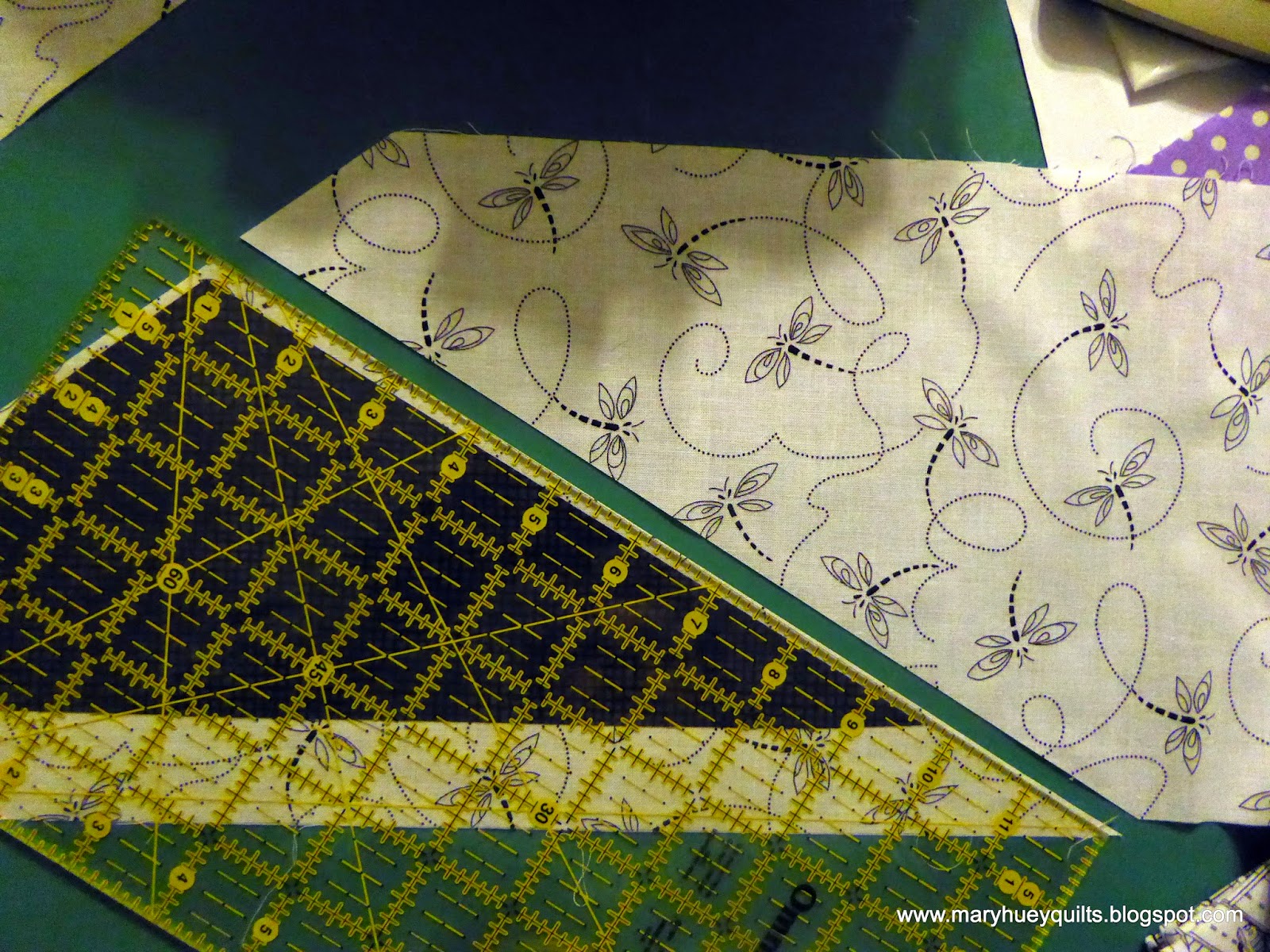 Now I had two triangles with the same angles as the roof triangle. 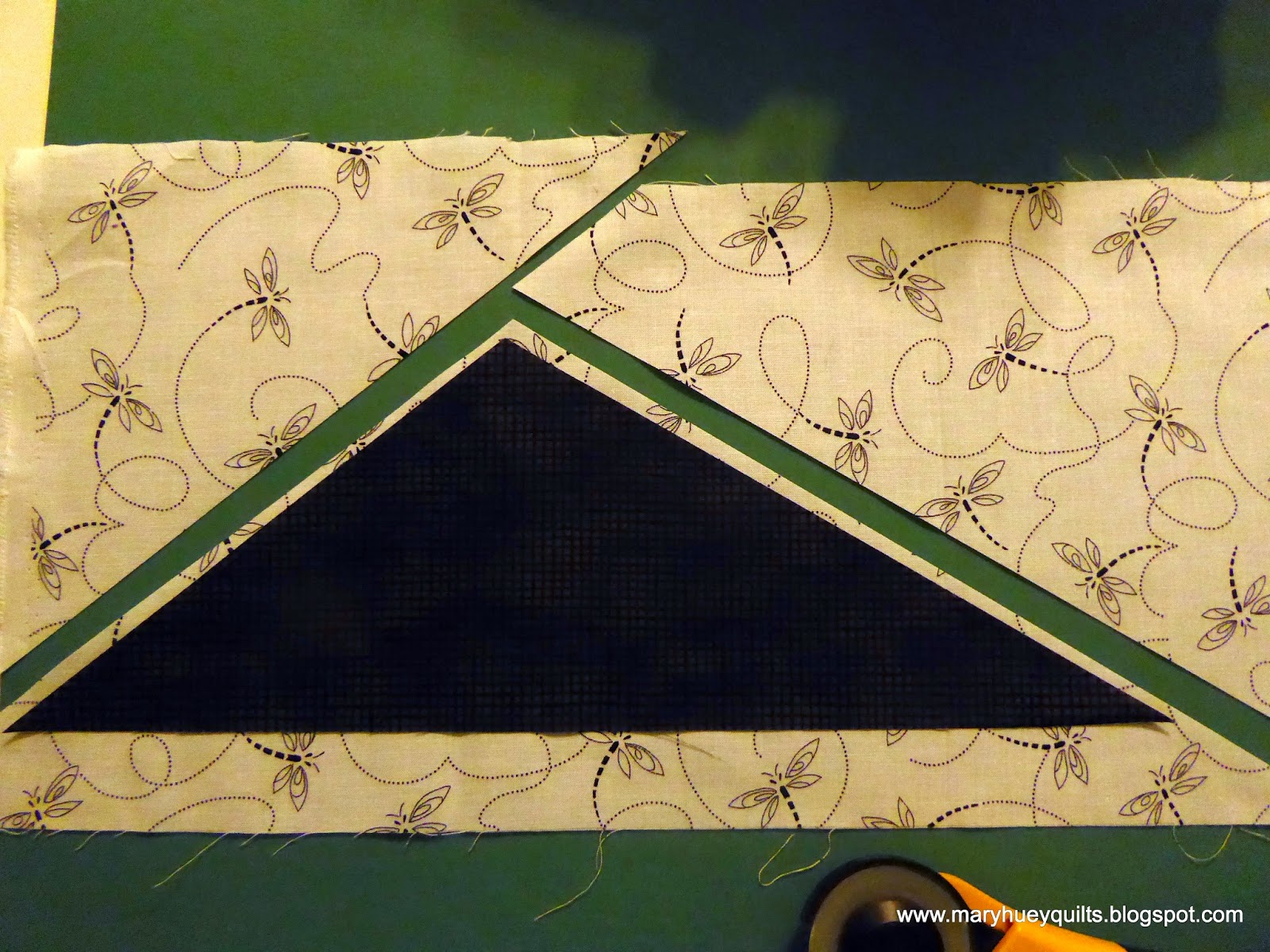 I removed the triangle of sky fabric laying under the roof fabric and I'm ready to stitch -- right side sky piece first, press and then the left side. 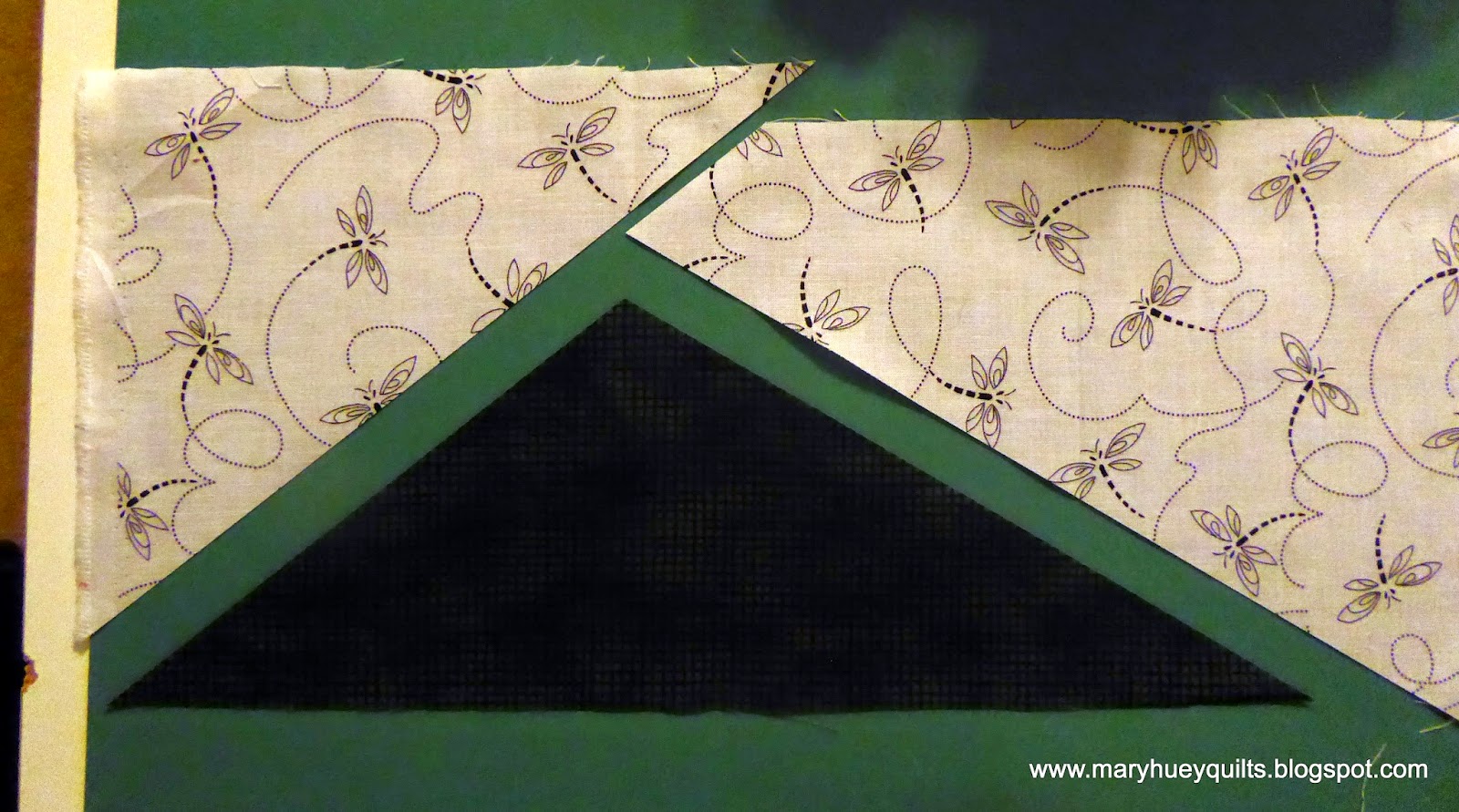 Here's the finished block, ready to trim to 12 1/2" for the start of my round robin. 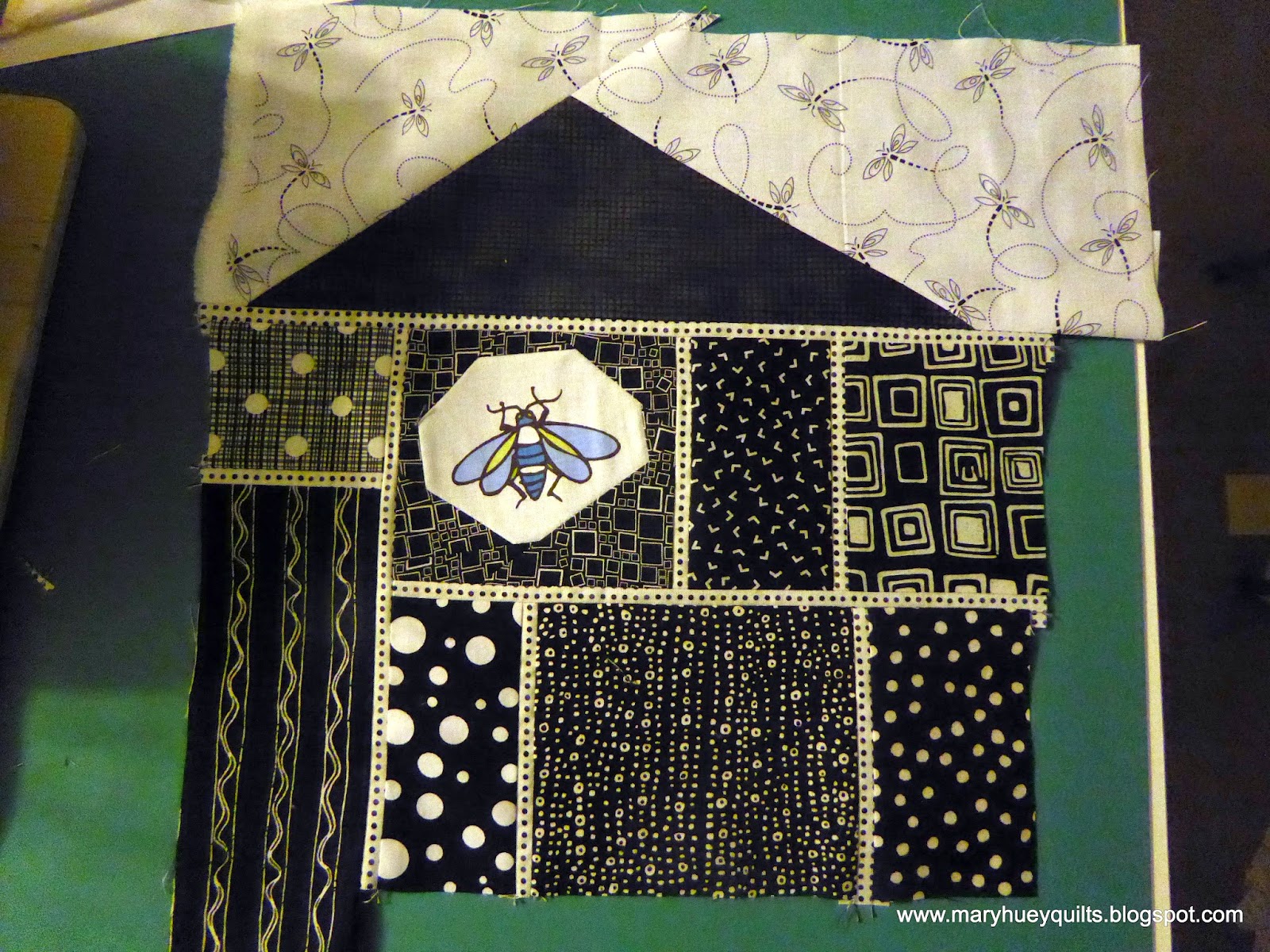 The lower and upper halves of the "hotel" were the same measurement, but when I trimmed it, I reduced the size of the lower half because I felt it gave it better visual balance. 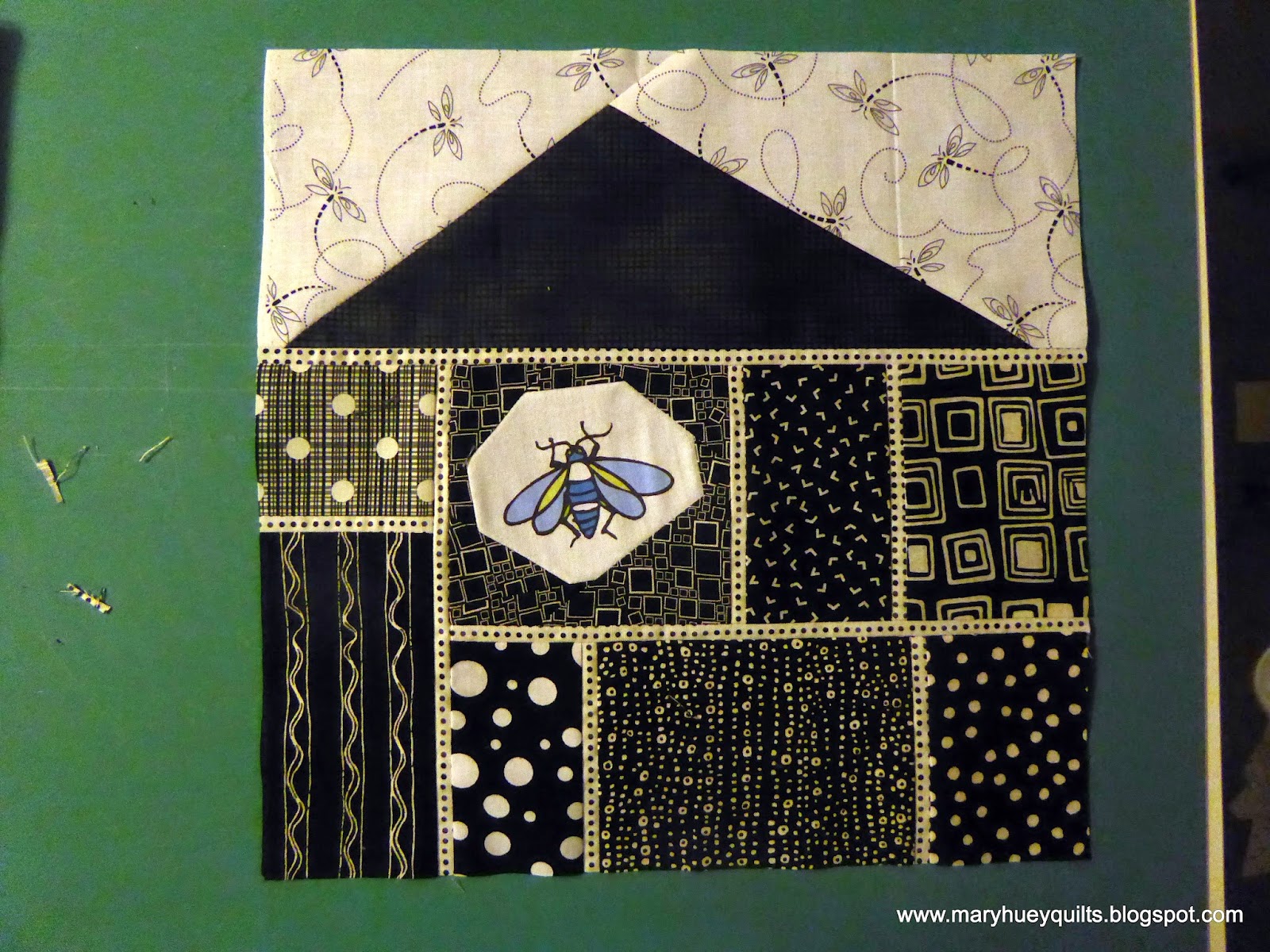 I have a string of fairly empty days on my calendar that will be devoted to studio time (and some house cleaning), so this weekend, I'll create a little journal to travel with the project and find a box to accompany it as it travels around the USA for the next six months.  All ready to go next week!!
I hope everything thing on my current "to-do" list is dispatched with as much inspiration and delight!!
Mary Huey
www.maryhueyquilts.com

Email ThisBlogThis!Share to TwitterShare to FacebookShare to Pinterest
Labels: Beaquilter's planned round robin