I collect setting ideas and so I'm delighted to discover Pinterest as a vehicle for keeping track of some good ones!!  Many unique settings feature pieced sashing -- it's a lot more work but it can take a simple block and add another element of design to a quilt.  So today I'm featuring 3 quilts that I've made recently with pieced sashing.
These big scrappy string stars (each star is about 22" square) came from the home of my husband's paternal grandmother.  They lived on her shelves for quite a long time and they lived on my shelves for over 30 years.  There are 12 blocks and I've made them into identical quilts for my 3 children.
I had to add the background triangles and squares so made them larger than necessary so I could square all the blocks up without losing any points.  The sashing was inspired by a small antique quilt I saw on e-bay.  I pieced the sashing from my "sourdough" box of 2 1/2" strips and squares.  The squares were sewn together in pairs (as leaders and enders, Bonnie Hunter style) and then into the sashing units -- 12 pairs long -- and that was too long for my star blocks.  So it had to be 11 pairs and the stars blocks were trimmed to 22 1/2" AFTER the sashing units were finished -- so I guess you could say I backed into the math.﻿ 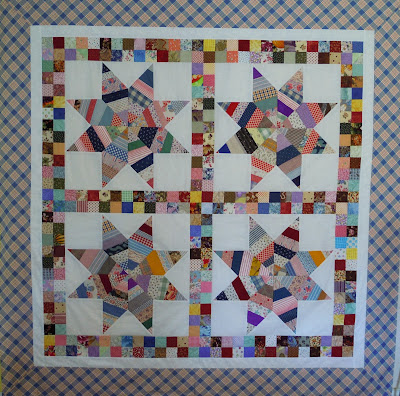 Interesting thing about the string pieced stars -- as I looked closely at them while reworking them, I realized the fabric was much earlier than the 1930's and 40's when Grandma Huey might have been sewing.  Was she using her mother's scrap bag?  Or were the blocks perhaps made by her mother or mother-in-law?  No one will ever know.  But it will be a nice piece of family history for each of my children to own. 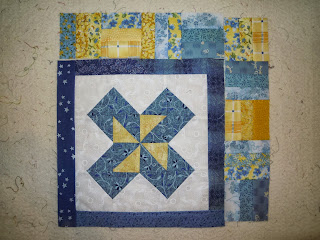 This is a close-up of one of the blocks from the top I showed off a couple weeks ago.  The source of the rail fence sashing idea is a mystery to me.  There was another plan for these blocks --  but that was over 10 years ago and if there were notes, they were long lost.

As I set the rail fence blocks into groups of 4, I discovered that I needed to "organize" them carefully to maintain an alternation of horizontal and vertical rails.    Again, the blue bordered blocks were trimmed to fit the sashing units AFTER I had sewn groups of 4 together. 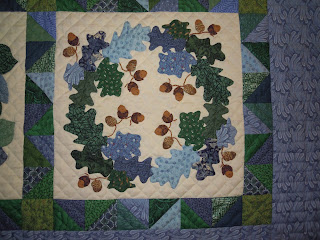 First plan for these applique blocks was to use one fabric for the sashing but when I started to audition  fabrics, I did not like the plain strips  -- and a row of squares pieced together looked clunky, too.  So the answer was triangles!  Trouble was that I couldn't organize the design of their layout, so I took a random approach, used squares for cornerstones and kept the value of the blues and greens fairly close so none would stand out too much.  There was quite a bit of "math puttering" to find just the right size for triangles that would fit around the blocks but once again I trimmed the blocks after the sashing was pieced.

Generally, the pieced units used for sashing are simple such as the 3 I've illustrated.  Flying geese are another good one for sashing as they add movement to a quilt.   This is a quilt one of student/friends displayed in a recent quilt show -- since the log cabin blocks are not very trimmable, the math for the sashing would need to be figured and tested to be sure everything fit. 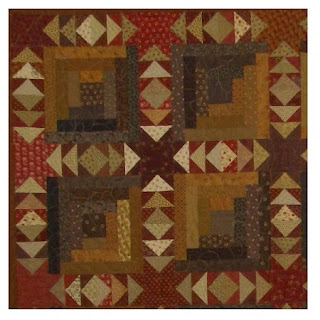 And with most pieced sashing, the size of the individual pieced units will determine the width of the sashing.

One of my favorite all-time books about settings for quilts is Sharyn Craig's Setting Solutions.  It has been out of print but sometimes you can find copies on Amazon or e-bay (be prepared to pay a healthy price) but there is also now a Kindle edition.

So start to pay attention to sashing, save the ideas you like and start to apply them to your quilts.  If you'd like to check out my Pinterest board, it's call "sashing ideas".

Next week, I'll share some construction ideas with you pertaining to sashing!