Here's some advice on pressing as it relates to chain piecing.  You do chain piece don't you?  If you don't you need to start using this technique.  It saves approximately 25% of every spool of thread -- think about how much you snip off and throw away!  It eliminates all that clean-up thread snipping saving time in the long run.  And it usually prevents those annoying incidents of fabric being sucked into the needle hole of your throat plate.
So when you are chaining piecing units such as the flying geese below, they come off the machine in a long string like this. 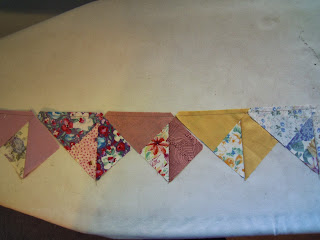 Anything you need to clip apart in order to use it in the next step, clip them apart.  In other words, I have to separate these geese to be able to sew them to something else.  Stack them in an orderly fashion -- all the same -- so you don't have to think so hard as you press them. 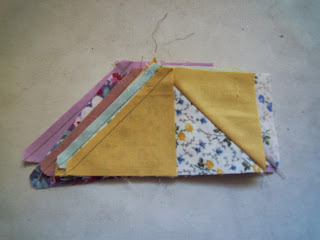 I've stacked these so that I can press with steam to set the stitching and then lift the left triangle up and press that seam to one side. 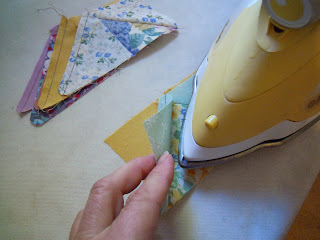 Pressing flying geese units this way eliminates bulk at the top point making it easier to set it together with other units.  That often breaks the "press towards the dark" rule but less bulk trumps everything in my opinion

If you are chain piecing units together that will be joined directly to one another, do not snip the chain!!  Go to the ironing board and lay them out in a string as below.  Mine are the first step in sewing together the 4-patch unit for Marti Michell's Tessalating Windmill. 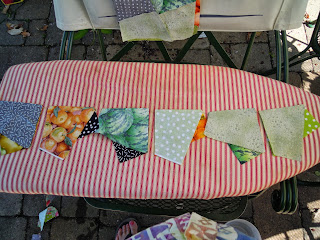 Now flip every other pair up so it's laying in the opposite direction.  Set the stitching with steam. 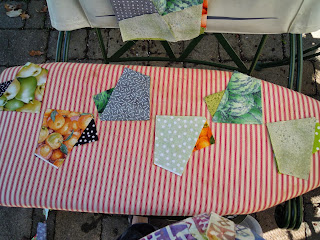 Now when you press, lift the piece on top and press the seam towards it with the side of your iron on a dry setting.  First seam will point up, second will point down, and so on.  Each seam will be opposite it's opposing seam automatically without thinking too hard. 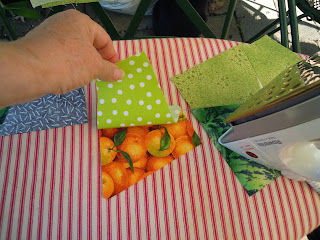 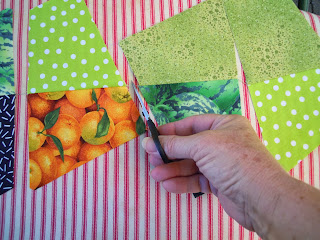 Make sense?  If it doesn't, you know where to find me!!
Now go press some stuff!
Mary Huey
www.maryhueyquilts.com
﻿