No doubt about it after this past week -- the day the calendar said "autumn begins", it began with a wallop here in Northeast Ohio.  The temperatures dropped and the rain and the wind came for a long weekend.  Nothing like the hurricanes in the Caribbean and Florida, but that's why I've retired here in NEOhio!!

I just came inside from doing what will likely be my last Ask A Bumble Bee survey for the season.  I started in mid June and have done about 10 surveys in my yard and several local parks.  It involved photographing all the blooming plants and counting how many (if any) bumble bees were foraging on them.  I didn't have to ID the bees beyond being "bumbles" but after a summer following them around the yard, I know this is a Common Eastern and it's a male and he is nectaring on Little White Aster which I've let go where ever they want to grow because all the bees love them! 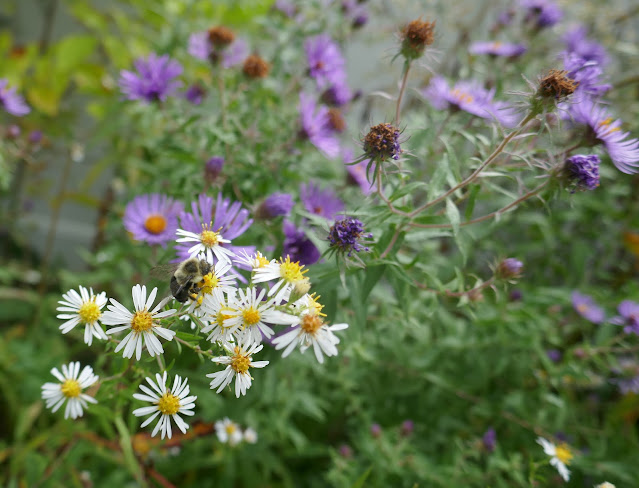 It's been very interesting to see how much the bumbles prefer native-to-this-region blooming plants.  For example, they were using the single dahlia blooms for nectar and resting . . . . until the asters started and now they have abandoned the dahlias and are all over the asters.   These three male bumbles aren't actually nectaring -- they are hanging out until it warms up a bit.  Such a fun picture!! 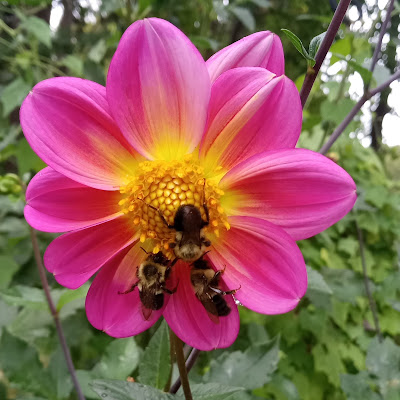 I was surprised to see how many of my beautiful non-native perennial flowers were completely ignored by the bumbles during their bloom periods.  The experience has firmed up my resolve to convert my lovely gardens into a native plant and insect habitat!  All new plants must be native like these little late blooming cuties -- Calico Asters!! 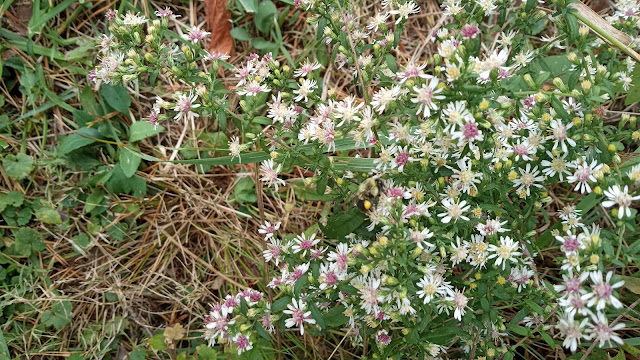 And while I'm on the subject of "gardens", for years I've been hoarding all the leaves that drop in my yard and using them for winter mulch on my flower beds without realizing how important it was for native insects -- I was mainly being lazy and practical.  Leaving the leaves in the flower beds meant not having to haul them to the street for pickup and saving me money on mulch.  During the past couple winters I've watched webinars about native pollinating insects (bees and such) and learned "leaving the leaves" not only saves me the work and money, it is also good for native insects in my habitat!  HERE is an explanation of why it's a good thing for nature.   This fall I'll be "leaving the leaves" again to enhance the vitality of my little backyard habitat and to save personal energy!!

The arrival of October means I only have three more months to reach my goal of dealing with at least 36 UFO's this year -- finishing 24 of them and eliminating 12 of them.  Turns out I'm really into "eliminating" at the moment -- I'm up to 18 so far?!?  The more I eliminate, the easier it seems to become!

However, I am a "little" behind on the finishing so to refocus myself, I put this piece up on the design wall where I have to look at it every time I sit down at my sewing machine.  I stalled out on it last year -- I still like the design but the designer's suggested "assembly" process is a problem for me.  Too modern, perhaps?  So I've gone a little bit rogue?!?  Once the polygons are stitched to the background down through the center lines of them, the designer suggested layering it for quilting.  Then the quilting was to be densely spaced vertical lines which would attach the rest of the polygons to the quilt simultaneously.  In my opinion, it would make the finished piece stiffer than I like and so I was reluctant to follow that suggestion. 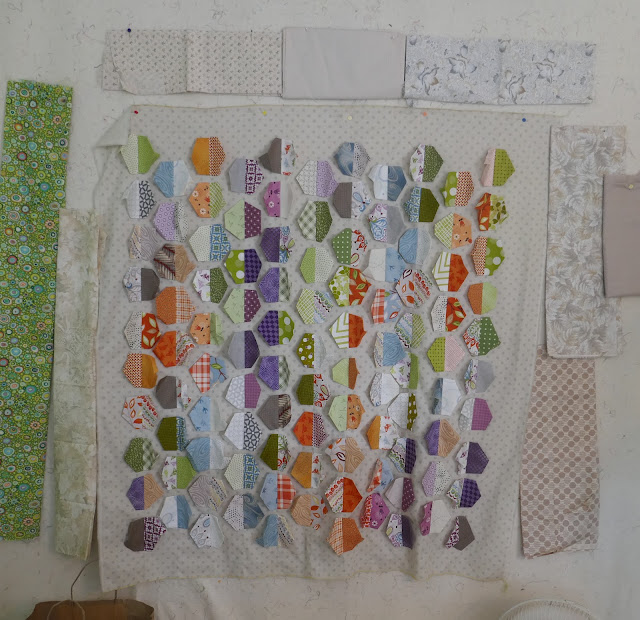 In an effort to get the project moving, I cleared off the cutting table ( a very rare but satisfying occurrence), 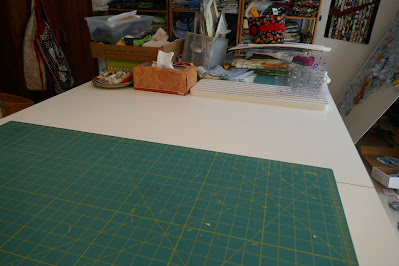 laid the piece flat and pinned everything down.  The designer gave an alternative step -- hand applique the polygons in place but since I'm not loving the process so much at this point, and . . . . 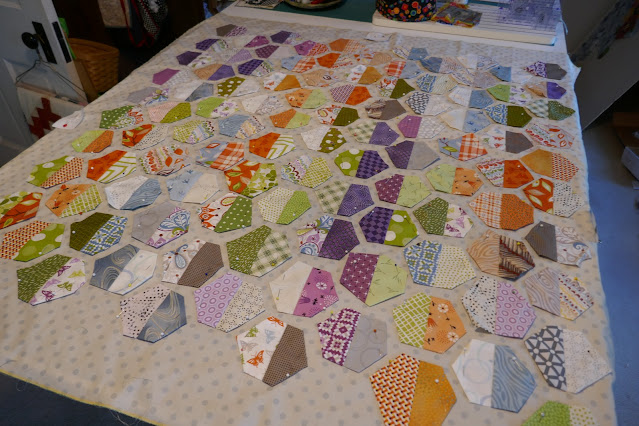 . . . . . . . having just finished that big EPP project by hand I wanted an easier hand stitching project right now.  So I elected to wrestle with this piece at the machine for a few days to topstitch the polygons in place. 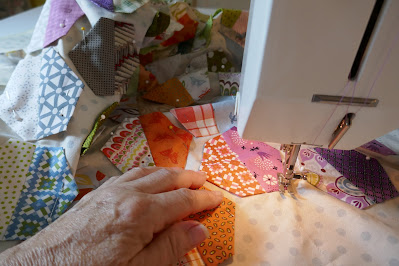 That step is finished and the top is back on the design wall waiting for a long afternoon of sewing time to build borders around it, expanding the top into a nice size lap robe.  As I was choosing thread for the topstitching, I realized this piece is basically a classic triad color scheme -- orange,  violet, and green -- which I've used before.  Thinking back to all the lessons I learned working through the book, Color From the Heart by Gai Perry almost two decades ago!  It's still available and a classic for sure! 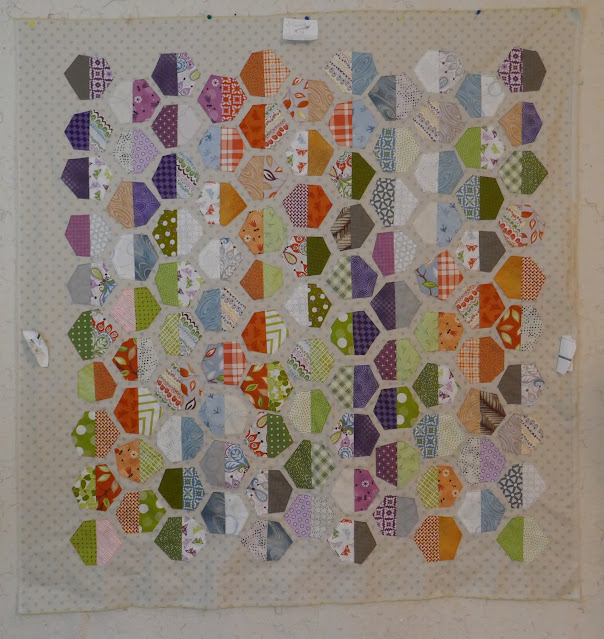 My fabric palette started with a couple 5" charm paks and leftovers from a layer cake -- all from different designers.  I'm always trying to show that mixing "collections" works just fine.
The hand stitching project I mentioned is to big-stitch quilt the other six EPP blocks I made in 2019 from the #sharksdinner block of the month.  It was easy to pick up since I layered the blocks last December while finishing the first six blocks into a laprobe.  The big stitch quilting is going well and last evening I started quilting the fifth block -- this will be finished soon!!

I have finished quite a few quilts using big-stitch -- it goes quickly and is pleasant to do since the stitch length is a bit loosey-goosey and I love playing with all the heavier pearle cotton threads! 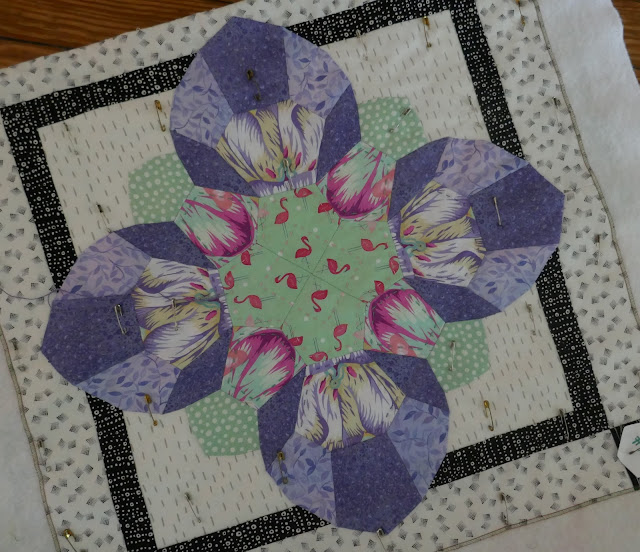 I entered the "matching" lap quilt I finished in December from the other set of these blocks into a local quilt show this weekend.  We are going to see it tomorrow and it will be fun to be back in a quilt show mode -- seeing lots of former customers and students, doing a little shopping, and checking out what everyone has been up to over the past couple years.
On the triplet grandkid front, the first day of nursery school came and went with no meltdowns.  They are so lucky to have a built-in "gang" to hang out with no matter where they go -- a triplet advantage!!  (It's funny how they always seem to line up in birth order from left to right.) 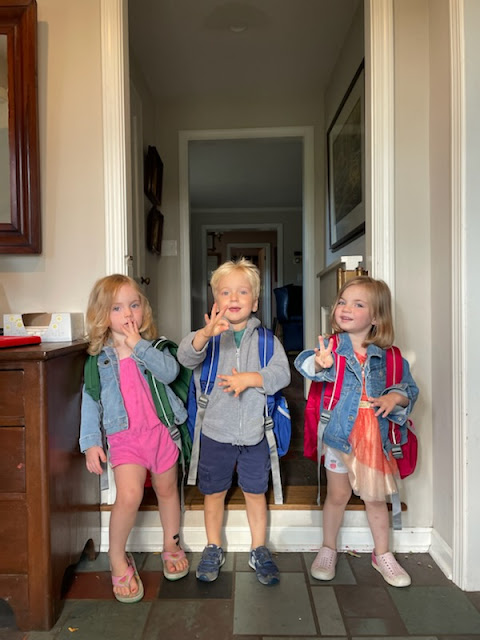 However, I did flunk "Grandma 101" the middle of September by forgetting my oldest grandson's birthday -- had to grovel a bit.  I really need to write everyone's birthdays in my calendar for 2023 so I don't do that again!!!
Keep stitching!!
Mary